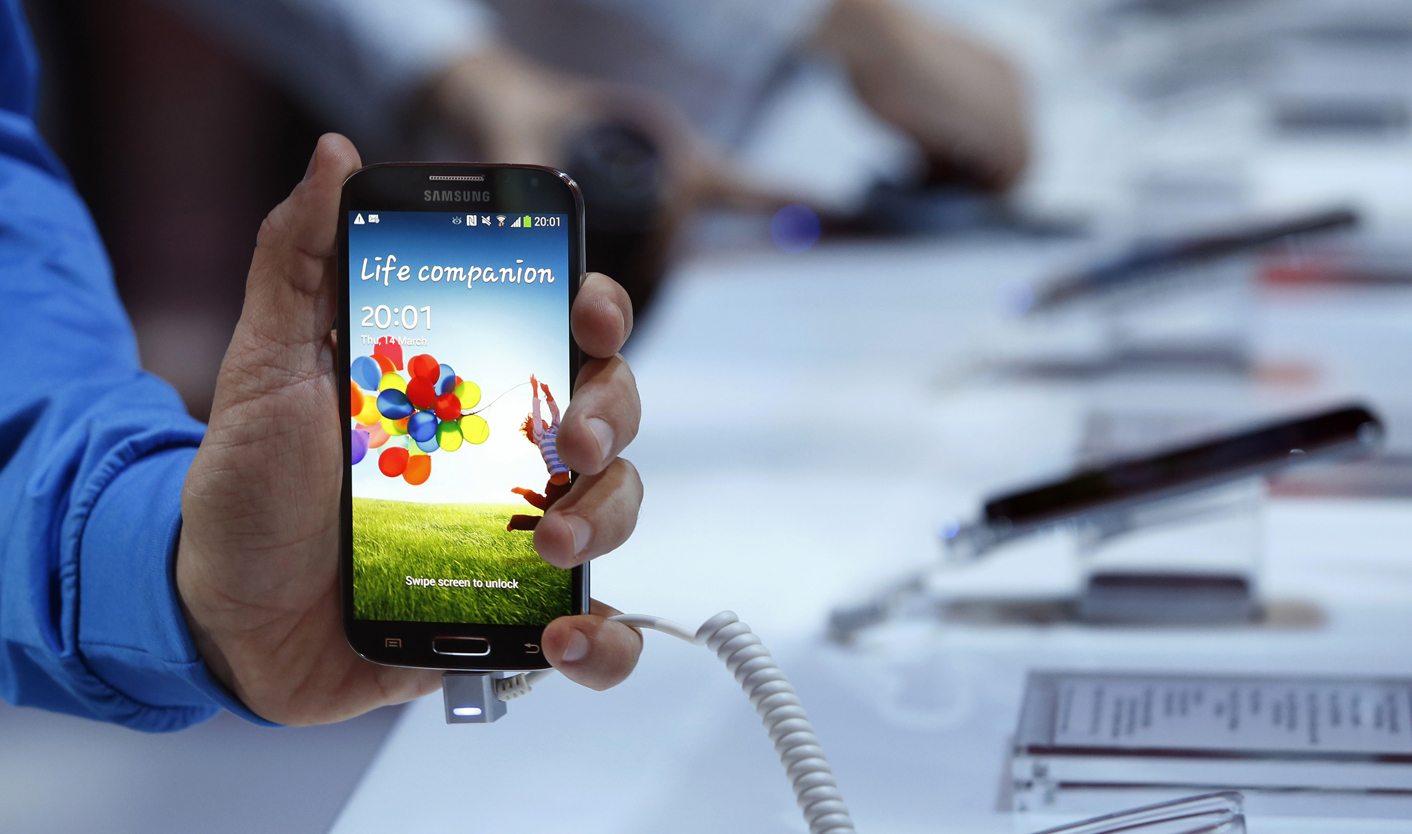 Overtaking Apple Inc as the world's leading maker of smartphones has stretched Samsung Electronics Co's in-house supply lines, and the South Korean firm is now courting some of its rival's main parts suppliers. By Miyoung Kim.

After costly courtroom battles over technology patents, the two gadget giants are now going head-to-head over securing the best supply of parts as they jostle to rule the $253 billion smartphone market. The two took 100 percent of the industry’s profit in January-March, Canaccord Genuity data show.

Trampling on Apple’s supply patch could make life tough for the U.S. firm as it prepares for its next product line-up including a cheaper iPhone for emerging markets such as China. Having Samsung muscle in on its suppliers could drive up costs and lead to component bottlenecks, disrupting product launches.

Samsung’s huge in-house supply chain – providing parts from displays and powerful processors to memory chips and batteries – has been a core strength in its war for smartphone supremacy. As it now looks to widen its lead with products spanning both the high and cheap-and-cheerful ends of the market, Samsung’s supplies have become stretched, prompting it to hunt elsewhere to ensure it isn’t caught short.

“The next round of the post-patent battle for them will be over component supplies,” said Lee Sun-tae, an analyst at NH Investment & Securities. “Who wins access to the best performing components in class in large quantity – that’s the key … and explains why Samsung is shopping for components more than ever.”

Samsung has made overtures to traditional Apple partners such as Japanese display maker Sharp Corp and South Korean chipmaker SK Hynix. Samsung, which buys most of its mobile screens from its Samsung Display unit, last year placed orders with Sharp for high-resolution LCD screens for its popular Galaxy range of products, though it later cancelled the order, said two people familiar with the matter, asking not to be named as the negotiations were confidential.

Sharp, in which Samsung bought a 3 percent stake earlier this year for $110 million, said this week it was seeking to boost sales to the Korean firm, potentially souring the Japanese company’s ties with Cupertino, California-based Apple.

Samsung is also using more chips made by Qualcomm, another major Apple supplier, in its flagship Galaxy S, which went on sale late last month.

Some other suppliers who provide parts to both Apple and Samsung include Toshiba Corp in NAND memory chips, Sony Corp, in image sensors, and Corning Inc for its Gorilla Glass used in iPhones, iPads and Galaxy products, industry data show.

STMicroelectronics and Bosch, the only mass producers of pressure sensors used in navigation features, supply those parts for the Galaxy range, and could be tapped by Apple for future products, according to research firm iSuppli.

For sure, Samsung still buys the majority of its components in-house, and the overlap with Apple on external suppliers is, so far, limited. BNP Paribas estimates that more than 80 percent of component profits generated by Galaxy S4 sales go to Samsung itself and its units.

But even a tiny overlap can be damaging as smartphones are constantly upgraded to more powerful computing and media devices – allowing users to take pictures, shoot video, play music, game online, watch TV and navigate – raising the need for more and smarter components.

“Any disruption in even small parts that you wouldn’t think are really core, say headphones, can affect product launches,” said Lee at NH Investment & Securities.

For example, Taiwan’s HTC Corp, which has slipped out of the top-10 smartphone makers, reported a record-low quarterly profit last month after delaying the full launch of its flagship model due to a shortage of cameras.

“Having a single supplier carries a lot of risk. Bearing that in mind, Samsung may even consider using LCD along with OLED in its signature Galaxy S range to reduce its total reliance on Samsung Display,” said Song Jong-ho, an analyst at KDB Daewoo Securities.

Samsung Display doesn’t produce LCDs for smartphones so as it boosts sales at the lower end of market it needs to outsource LCDs. The Korean firm uses the more expensive OLED display only on its high-end models.

Outsourcing more components could mean Samsung will lose some of its hardware differentiation – a big selling point for the Galaxy range – and be seen as just selling generic phones, say some analysts.

The Exynos 5 Octa processor, which Samsung touted as having 8 brains designed to maximize energy efficiency while multi-tasking, is not used in the S4 models sold in the United States. Instead, Qualcomm’s Snapdragon chips will power the phone in that crucial market, with Exynos chips used in select markets such as South Korea and some European countries.

“Given that Qualcomm chips are also found in rival products, and the much-heralded launch of smartphones with flexible display appears to be delayed, I’m worried Samsung is losing its hardware differentiator,” said BNP Paribas analyst Peter Yu.

Samsung says both Qualcomm and its own chips have passed its rigorous quality standards and both will provide satisfactory user experience. “We’ll continue to resort to multi vendors to ensure smooth supply,” Kim Hyunjoon, vice president of Samsung’s mobile business, told analysts on a recent earnings call.

Samsung’s Exynos processors accounted for around 30 percent of the S3, but that is likely to fall to around 10 percent in the S4, analysts said.

“Qualcomm’s latest chips are getting good reviews from carriers, which I think forced Samsung to switch in favour of Qualcomm from Exynos in the S4,” said KDB Daewoo’s Song. “There’s even a possibility Apple may drop its own processor and go for Qualcomm chips in some future devices.”

Losing some of its hardware appeal and taking longer than expected to come up with innovative products such as flexible or wearable devices are additional challenges for Samsung, which is getting only mixed reviews for its efforts to improve software capability to integrate better with hardware.

In a recent review of the S4, Walt Mossberg, a gadget expert for the Wall Street Journal, said Samsung’s software was “often gimmicky, duplicative of standard Android apps, or, in some cases, only intermittently functional.”

Despite the lukewarm reviews, consumers keep snapping up the S4, according to carriers. For the first time in at least three years, Samsung last year spent more on marketing than on research and development, seeking to pick up market share in the absence of new, competing models from Apple. And Samsung’s operating profit is seen topping Apple’s this quarter for the first time in years, J.P. Morgan analysts predict.

“There’s not much left in terms of what you can do to really differentiate your product as everybody’s thinking something similar – flexible or wearable,” said NH Investment & Securities’ Lee.

In late 2011, Samsung told analysts it planned to introduce flexible displays on handsets “some time in 2012, hopefully the earlier part than later”, but a year later it said the technology was still “under development.” It again demonstrated prototypes of flexible phones earlier this year, but executives now say they can’t disclose the timing of flexible smartphones.

Photo: A man holds up Samsung Electronics Co’s latest Galaxy S4 phone during its launch at the Radio City Music Hall in New York March 14, 2013. Samsung Electronics Co on Thursday premiered its latest flagship phone, the Galaxy S4, which sports a bigger display and unconventional features such as gesture controls and will spearhead its effort to challenge Apple Inc on its home turf. REUTERS/Adrees Latif