Dirty tactics: How Kenyatta and Ruto will beat the ICC 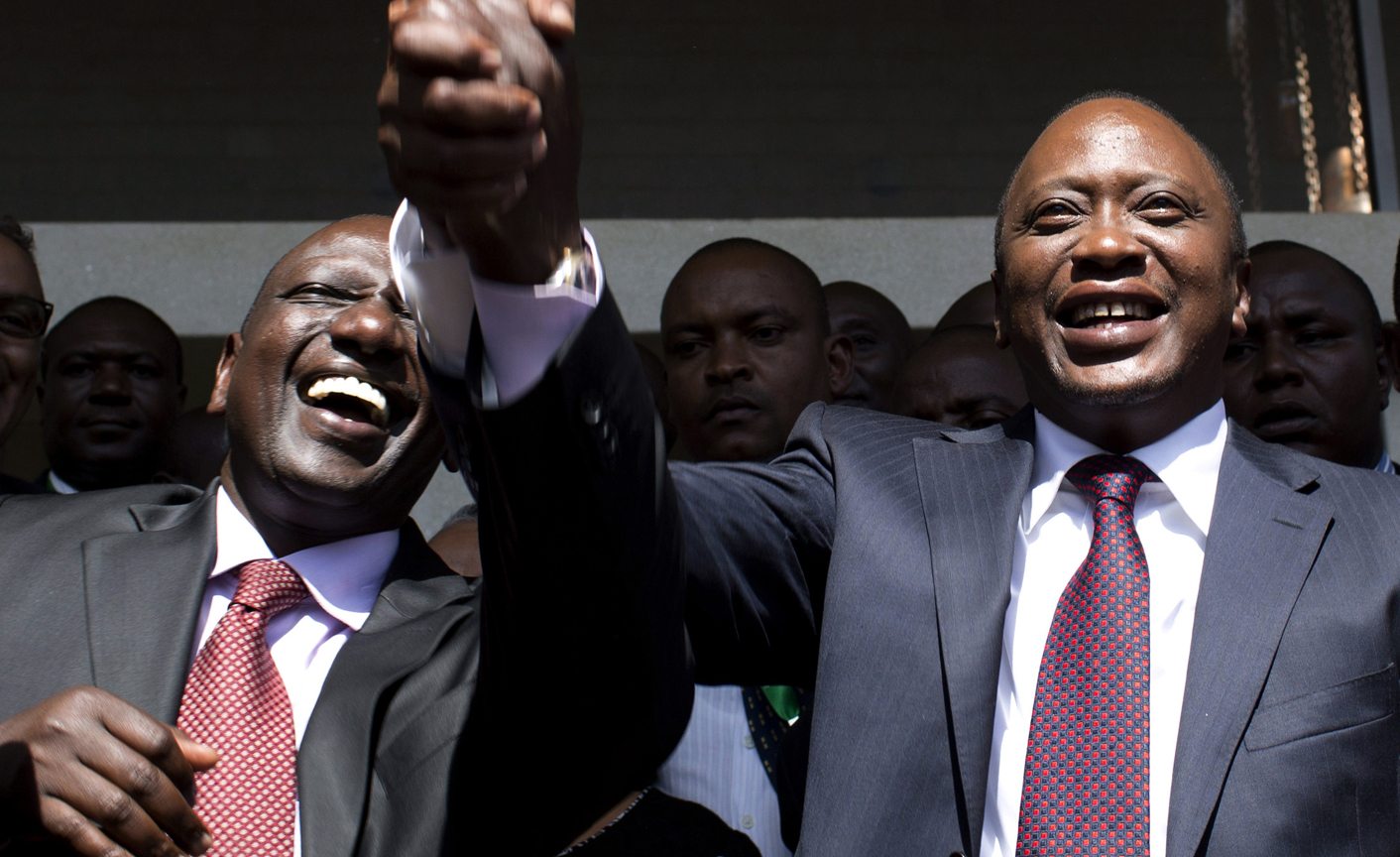 It hasn’t been long since Kenyan voters transformed Uhuru Kenyatta and William Ruto from nasty politicians into the country’s leading statesmen, nevermind that both have been charged with crimes against humanity. But as their trials loom larger, so do the dirty tactics. It’s a fight the International Criminal Court will struggle to win. By SIMON ALLISON.

The election of Uhuru Kenyatta and William Ruto as Kenya’s president and deputy president respectively was always going to cause a few diplomatic problems, given the walking paradox that is a head of state charged with crimes against humanity. Presidents are supposed to make and uphold the law, not disregard it (hear that, Jacob?).

This contradiction is already manifesting itself. Although invited by British Prime Minister David Cameron to a special conference in London on Somalia, President Kenyatta wasn’t happy that Cameron – mindful perhaps of those infamous happy snaps of Tony Blair hugging Muammar Gaddafi – refused to pose together for a photo-op.

Also allegedly snubbed by the official photographer in London was Ugandan President Yoweri Museveni, perhaps for his outspoken support of Kenyatta and Ruto – a sign, perhaps, of more serious diplomatic rifts to come. His claims of nefarious neo-colonial intentions, made at Kenyatta’s inauguration, echoed those made by Kenyatta and Ruto during their campaign: “I was one of those that supported the ICC because I abhor impunity,” he said. “However, the usual opinionated and arrogant actors using their careless analysis have distorted the purpose of that institution. They are now using it to install leaders of their choice in Africa and eliminate the ones they do not like.”

And then came the strange story of the letter submitted to the United Nations Security Council by Kenya’s UN envoy. In this 13-page polemic, Macharia Kamau – representative of the Kenyan government and ultimately of Kenyatta himself – demanded that the International Criminal Court charges against Kenyatta and Ruto be dropped.

Kamau went at it from every angle: the prosecution is incompetent; the evidence is lacking; the witnesses are not compelling; Kenya should be left to come up with its own justice; the country will fall apart if the prosecution goes ahead; and that the resulting chaos could spread across borders. Right.

Kamau’s impassioned petition was doomed from the start, however. For a start, the Security Council is not in the business of responding to threats. “The message is clear – leave us alone, or we’ll set the place on fire,” wrote Makau Mutua, chair of the Kenyan Human Rights Commission, in the Daily Nation. “I don’t see the UN succumbing to such naked blackmail.”

Even if it wanted to, however, the Security Council has no legal right to stop an ICC trial – only to delay it by 12 months. It has shown no inclination to do this either.

But this is where the story gets odd. Kenyan attorney-general Githu Muigai, who is tasked with liaising with the ICC, said he had no idea that Kenya had been planning to petition the Security Council.  “We were not aware the letter had been written… we have been pursuing the case with the court and worked closely with the president of the court, the registrar and the prosecutor.”

Also in the dark, apparently, was William Ruto himself, speaking through his lawyer Karim Khan. “I have spoken to my client, Mr William Ruto, and I can confirm and he has made it clear that he was not consulted on anything to do with New York. A letter being circulated is not government policy.”

It has not yet been established whether President Kenyatta knew about the mysterious letter beforehand, although Kenyan media are reporting that their sources indicate it came from his office. All we know for sure is that already, the boundaries between the private (the case against Kenyatta) and the state (the formal UN petition) are blurring to nothing.

However, with the weaknesses in the International Criminal Court’s case becoming more apparent by the day, the pair might not have to rely on strong-arm diplomacy to escape a trial.

“The case against Kenyatta and his deputy, William Ruto, which relates to their alleged orchestration of violence after the last election, is thought by many to be unravelling,” wrote David Smith in the Guardian, shortly after the election results came in. “Last month prosecutors dropped a crimes against humanity case against co-accused politician Francis Muthaura after a key witness admitted lying – the first time in the 10-year-old court’s history that they have dropped a case so close to trial.”

Since then, two more prosecution witnesses have dropped out. Both recanted their testimonies in full and claimed that they were induced by prosecutors to testify against the accused. “I did not witness any event and cannot vouch for the truth or otherwise of any allegation that has been made or attributed to me against [William Ruto],” said one of the witnesses in question.

If this retraction sounds suspicious, it probably is. The ICC’s chief prosecutor, Fatou Bensouda, complained of an “unprecedented level of witness interference” in this case, marked by “persistent and systematic” attempts to bribe witnesses and as well as extrajudicial killings, forced disappearances and threats against them. This was before two of the accused were elected to the two most powerful positions in the country – a development hardly conducive to improving the atmosphere of intimidation.

All this is bad news for the ICC and its attempt to prosecute hold a sitting head of state (and his deputy) responsible for their actions. In order to make the case stick, it will need to be watertight – and the court will need to have complete, unstinting international support. Kenyatta and Ruto appear to be cynically undermining both of these. Without resorting to dirty tactics of its own, the prosecution has an uphill battle on its hands. DM