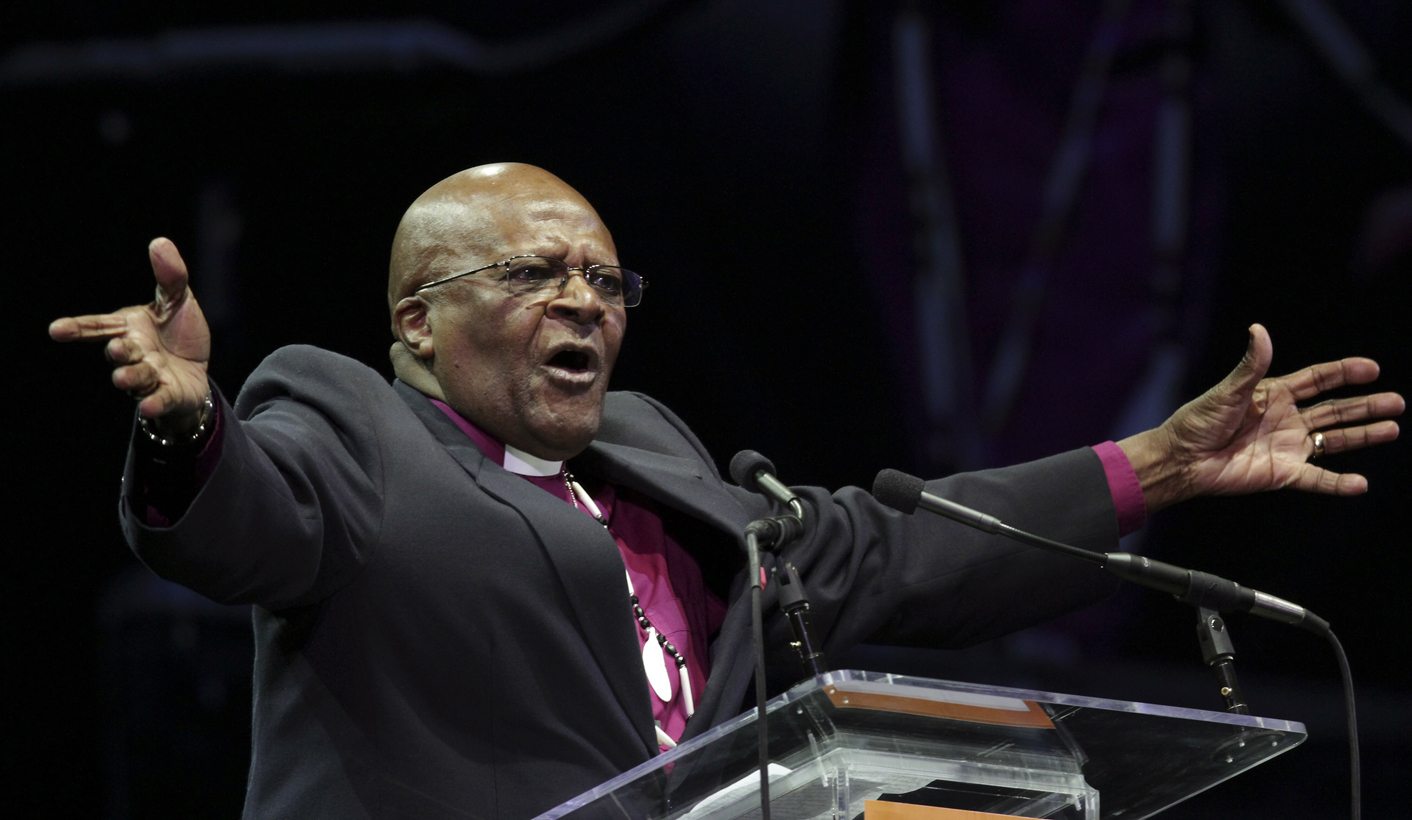 “I’m not a card-carrying member of any political party. I have over the years voted for the ANC, but I would very sadly not be able to vote for them after the way things have gone.” These are the words of Archbishop Emeritus Desmond Tutu, who wrote last week that it was “a very huge ache” to see South Africa deteriorating the way it is. It is no secret that Tutu is angry and disenchanted with the ANC. His is no ordinary voice, but does what the elders say matter, and do they impact on the mindset of South Africans? By RANJENI MUNUSAMY.

Who could forget the wrath of Desmond Tutu two years ago when government denied an entry visa to the Dalai Lama, preventing him from attending the archbishop’s 80th birthday celebrations? Tutu addressed a media conference in Cape Town, and in his animated manner, vowed the downfall of the ANC government.

The Tibetan spiritual leader was meant to have delivered a lecture in Cape Town to honour his fellow Nobel peace laureate on Tutu’s milestone birthday. Tutu’s reaction was more than just anger and disappointment over his spoilt birthday celebrations but a build up of distress about the political direction of the country which he had occasionally voiced. The Dalai Lama incident however, was clearly a tipping point.

“The Dalai Lama, anywhere in the world, they have problems finding a venue that can contain the people who want him. He goes to New York and Central Park is overflowing. The discourtesy is mindblowing.”

Some time has passed since the incident and Tutu seems to have calmed down considerably. But last week, in an opinion piece in the British magazine Prospect, reprinted in the Mail & Guardian, Tutu wrote that he would not be able to vote for the ANC after the way things have gone.

“South Africa has the capacity to be one of the most vibrant countries in the world. We have some of the most wonderful people of all races that you could imagine. Our potential is immense. And it’s an ache, it is a very huge ache, for oldies like me to see our country deteriorating and slowly sliding off what we thought belonged to us – the moral high ground.

“It’s a great pain to see that we still have the kind of disparity we used to decry under the Apartheid dispensation,” Tutu wrote.

“No one imagined we were going to have a paradise overnight, but we imagined that by now we would have made very considerable strides in bridging the gap between the poor and the well off. Yet today South Africa is the most unequal society in the world. We can’t hold our heads up with pride when you think of the levels of violence in our country.”

Tutu said people like him had imagined that the idealism and altruism of the liberation struggle would automatically carry over into the post-Apartheid period but these have been displaced by corruption and unaccountability. “Seeing how standards have dropped is so galling because it seems to give ammunition to those who would say: ‘We warned you that once you had a black majority government you would see a steady decline in standards’,” he wrote.

Tutu is obviously extremely disillusioned that the “rainbow nation” he once exalted has faded. But he is also hurt that the ANC, first under Thabo Mbeki and then Jacob Zuma, has shunned him and disregarded his criticism of their leadership of the country.

In truth, though, Tutu was opposed to Zuma even before he became president. In 2006, Tutu urged Zuma to drop out of the ANC presidential race due to the accusations of rape and corruption against him. By that time, Zuma had already been acquitted of rape but the corruption trial was ongoing. In a public lecture, Tutu said he would not be able to hold his “head high” if Zuma became president.

It could only have gone downhill from there, but Tutu busied himself with the work of The Elders, the group of world leaders who use their experience and wisdom to intervene in some of the globe’s most difficult problems. While Tutu’s voice is valued around the world, on international conflicts, HIV/Aids, poverty and human rights, in South Africa it seems less so.

After being attacked by sections of the tripartite alliance and even the Congress of South African Students, which called him a “loose cannon” and a “scandalous man” in defence of Zuma, Tutu is being deliberately cast as an overly emotional, unhinged old man whose views no longer count.

Therefore, while the ANC did respond to his 2011 tirade over the Dalai Lama, telling him to “calm down”, it has not done so now, even though his strongly opinionated article was penned in an international publication. It is not that the ANC doubts that Tutu is an influential international figure – his string of international awards and acclamations show that he remains so, long into his retirement. However, the ANC realises that if it does respond to him, this might start a real debate back home which South Africans would tune into. As long as the ANC continues to ignore Tutu, it does so in the hope that its own constituency will too.

While Tutu does have a penchant for melodrama, it does not mean that his views and concerns about the country should be disregarded. If a respected elder such as the retired archbishop can be cast aside as a noisemaker and a nuisance who should not be taken seriously, what about ordinary South Africans who do not carry Tutu’s formidable legacy but do have questions about the future and functioning of the country? Already there is a level of disdain from government when dealing with scandals such as the renovations at the president’s Nkandla residence, the death of 13 South African soldiers in the Central African Republic and the travails of the Gupta family.

Of all the things Tutu has written and said about South Africa, the most worrying for the ANC is his assertion: “We really need a change”. The ANC has a vested interest in keeping things the way they are with nobody making too much of a din to challenge it. Tutu has proven in the past that he can really make a din and get the world’s attention.

But can he get South Africa’s attention or will people see him as a cute, slightly clownish old man past his sell-by date? Whatever Tutu’s quirks, he remains a living legend who is held in high regard the world over. While the world continues to shower him with high honours and prizes, it seems that some in his own country would like to diminish his stature and his voice. The least South Africa can do is to listen and evaluate whether, beyond the melodrama, there is merit in what Tutu is saying.

The wise old man has cried for his beloved country before, he should not have to do so again. DM

Photo: Archbishop Emeritus Desmond Tutu, in one of his last public appearances in the United States, speaks at the Greater Tacoma Community Foundation “Be the Spark” main event before a crowd of more than 15,000 in Tacoma, Washington, May 13, 2011. The “Be the Spark” event’s goal is to inspire action to create a better community.  REUTERS/Marcus Donner