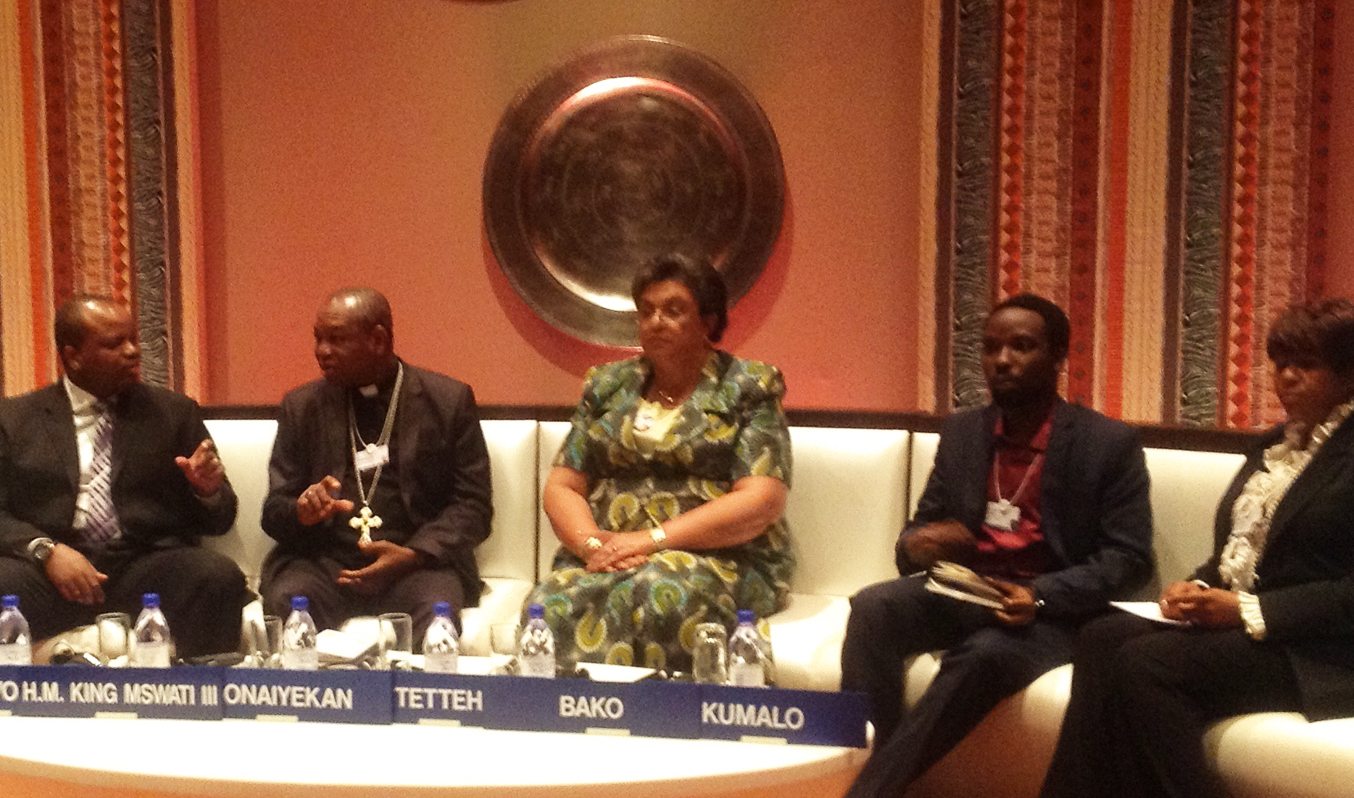 Exactly why the World Economic Forum on Africa invited King Mswati III of Swaziland to sit on a panel is a slight mystery. Throughout the WEF, the values of transparency, accountability, good governance and anti-corruption have been highlighted over and over again as essential to Africa’s growth. These values are the antithesis of what King Mswati’s rule has meant to Swaziland. But he insisted on Thursday that the Swazi people are very happy with their feudal status quo. By REBECCA DAVIS.

King Mswati III prides himself as a traditionalist. One has to assume that this is why the WEF thought he’d be a good fit for a discussion session on ‘Africa’s Values’: you know what you’re getting. Nonetheless, there are presumably many staunch Africanists who would conclusively disavow many aspects of Mswati’s lifestyle and history as representing traditional values. There is his vast personal fortune – Forbes has ranked him as one of the world’s top 15 richest monarchs, with an estimated wealth exceeded $200 million. That’s in a country where 43% of the population lives in chronic poverty, according to a recent report released by democracy watchdog Freedom House.

In 2011, an Al-Jazeera opinion piece suggested that Mswati is synonymous with “profligacy, ostentation, corruption, and petty self-indulgence”. Presumably nobody would suggest that these are traditionally “African values”, or values endorsed in any way by the World Economic Forum. And yet there he sat on Friday, on a WEF panel moderated by former Zimbabwean minister Nkosana Moyo, preparing to discuss the very topic of African values with the Archbishop of Abuja, John Onaiyekan; Ghanaian Foreign Affairs Minister Hanna Tetteh; Miss South Africa-turned-businesswoman Basetsana Kumalo; and Nigerian film director Ishaya Bako.

And, obviously, Mswati proceeded to say exactly the kinds of things you’d expect someone to say when the entire viability of their position rests on them presenting themselves as a bastion of traditional values. “When God created the world He also created mankind, and He also created the identity of the person,” Mswati began: in other words, tradition and culture are utterly immutable because they are passed down directly from God. Tradition, he said, often gets a bad rap: “Tradition doesn’t teach you to be backward, it teaches you to be humble, respectful, obedient, and live happily with your neighbours.”

Some would argue that Mswati himself has yet to internalize the traditional value of being humble, in particular. This is, after all, the man whose car collection includes a R4,5 million Maybach limousine. He is also the man who threw a birthday party last August at an estimated cost of over R3 million, to which he encouraged his subjects to donate their own cattle.

There’s no denying that Mswati does live happily with his neighbours, however. Even though Cosatu has repeatedly criticized the monarch for inflicting a state of “terror and repression” on the workers of Swaziland,  and South African religious leaders have spoken out against Mswati, the South African government has remained silent on human rights abuses in the country, and bailed the country out from financial trouble. The Economist wrote in 2010 that some credit the cozy relationship between Pretoria and Mbabane to a rumour that Mswati gave Zuma money during his campaign to oust Mbeki.

One irony to the panel’s proceedings on Friday was that both female panelists sitting alongside Mswati spoke out against old customs which oppress women. Ghanaian Foreign Minister Hanna Tetteh gave the example of a Ghanaian custom which held that if one family had wronged another in some way, they could hand over a young woman to win redemption. “We felt this was against women, backwards,” Tetteh said. So the Ghanaian government launched a process of dialogue with communities to discuss the practice, and subsequently criminalized it. “You can’t criminalize behaviour before people understand that it is a crime,” Tetteh said.

Basetsana Kumalo also took on gender issues. There are traditional practices involving women which hold the continent back, she suggested: like denying women the right to buy land or open bank accounts. Was this a dig at Mswati? It might have been: in Swaziland, funnily enough, legislation preventing women from taking out bank loans or owning property remains on the books despite having been judged unconstitutional. A Swazi women’s rights activist, Cynthia Simelane, told the UN’s Irin news network in January: “All these laws that make Swazi women second-class human beings, they were not part of traditional Swazi life”.

Bishop Onaiyekan said that he was sometimes perplexed by the nature of modern states and leadership. “In our tradition, when we had kings, they were not absolute rulers, not dictators,” he said.  By way of example, he said: “It was not possible for a king to steal all the money of his people and put it in Switzerland.” (Swazi activists believe Mswati has a Swiss bank account under the name ‘Makosetive’.) Onaiyekan said that traditionally, African decision-making was communal and transparent: “Matters which affect the whole community cannot be secret,” he said.

When it came time for questions, Independent Newspapers’ Peter Fabricius didn’t mess around. Given that the panel had been wrestling with the question of how best to reconcile traditionalism and modernity, Fabricius said, would one way forward not be for Swaziland to edge towards a constitutional democracy?

Mswati was utterly unfazed by the question. “Just to give the gentleman a bit of comfort, the king is not someone who makes decisions on his own,” he says. (This is true: technically Mswati rules together with his mother.) “In our system we allow every Swazi person a decision, to decide how we do the politics,” Mswati explained. “They are happy with the system. They don’t want to see any change. And as a king you are ruled by the people, you don’t want to impose on the people.”

When Swazi protesters took to the streets in 2011, at a time when it appeared that the government could not afford to pay the salaries of government employees, the government reacted by launching a crackdown on opposition. “Security forces used water cannons against protesters, police raided activists’ homes, and the national organizer of the banned Swaziland Youth Congress said he was held and tortured by police for 24 hours,” the recent Freedom House report stated. The same report notes that in the run-up to elections later this year, the cash-strapped government has nonetheless managed to budget an awful lot of money for security. To be precise, there’s a “fifty fold increase”  in funds allocated to buy military equipment  and finance correctional services. DM