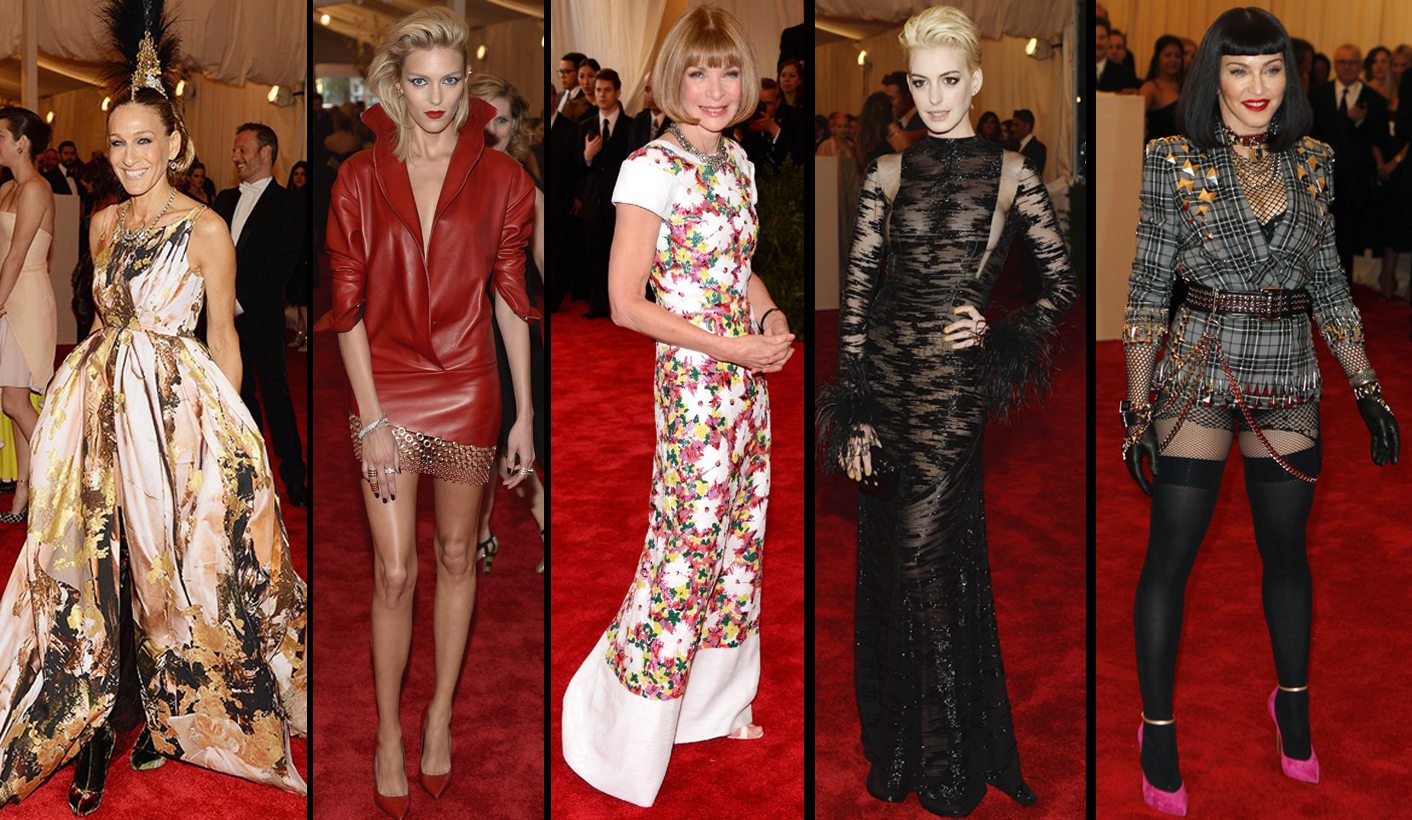 A dramatic Haute Couture event with New York City and a red-carpeted grand staircase as a backdrop, the Metropolitan Museum of Art’s Costume Institute Gala Benefit is one of the most coveted fashion extravaganzas in America. This year, daring outfits punctuated with fauxhawks, platinum blonde hairdos, cut-out studded leather symbols of ‘punk influence on fashion’, made for a theatrical night. By EMILIE GAMBADE.

Initiated in 1948 by the iconic fashion publicist, Eleanor Lambert, who later organised the Council of Fashion Designers in America (CFDA), the first intention of the Costume Institute Gala was to integrate art with fashion. It was launched as “The Party of the Year” and surely held the expectations attached to its tagline.

Predecessors of Anna Wintour, fashion quintessence Jackie Kennedy Onassis and Canadian socialite Patricia Taylor Buckley were co-chairs of the Gala Benefit, both shaping the collective discourse around fashion and influencing the conviction that clothing design is an art form.

The Met Gala is carefully orchestrated: 800 guests in 2013, mainly celebrities, hand-picked by the legendary Wintour. A horde of staff, reporting months before the gala on who will be dating who and who will be wearing what, drawing the list of who will get a seat at the select tables (going for as much as US$250,000). Not everybody can be charitable in the glam world of Vogue; the gala is opened to celebs and rich benefactors only, VIPs en vogue with sky-rocketing popularity and an unbeatable style factor, though not always of the best taste.

Translated locally, it would be as if the Iziko Museums, say the Slave Lodge, (which currently holds an exhibition called “Material women? The shweshwe story”) was supported by a local media house to raise funds for its year’s costume exhibitions. On the guest list: fashion editors, local designers and celebrities of the day, using their bank accounts to feed the preservation of the country’s cultural textile heritage and boost a dormant industry that doesn’t lack talents and mind-blowing creativity. It would be great, wouldn’t it?

Despite some detractors looking askance at the Met Gala’s extravagant display, the event remains the main source of funding for “exhibitions, acquisitions, and capital improvements” of the Institute and the most stylish social event of the year. It brings together the fashion industry’s main players in a recurrent effort to create exhibitions that are often thought-provoking, offering an astute summary of Western fashion history.

In 2011, the Costume Institute held an exhibition called “Savage Beauty” curated by Andrew Bolton and Harold Koda, which praised the work of the late Alexander McQueen, his turbulent imagination and technical brilliance. The exhibition was a continuous success: the museum stayed opened for the first time until midnight for a whole weekend, and more than 650,000 people in total attended the presentation.

This year, the theme of the Met Gala, which is always based on the opening of the Institute’s spring exhibition, was dubbed: “Punk: Chaos to Couture.” Obviously, guests had to dress accordingly: in this case, ‘punk’ meant either an attitude (Debbie Harry is inherently punk) or a clothing rhetoric made of razor blades, spikes, platinum dyed hair, fishnets and leather jackets.

First, there were the ones who took the theme literally, as in razor blades, spikes, platinum dyed hair, fishnets and leather jackets. Madonna, who can’t really be beaten in the I-can-wear-what-I-want category, wore a metal-studded tartan Givenchy jacket over a black bra covered by fishnets, tightly belted at the waist with chains falling on her hips, a now infamous ‘Butt crucifix’ hanging at her back, neon pink pointy shoes on her feet and voilà. No pants, thank you, fishnets will do.

Model Anja Rubik went for a red leather short shirtdress by Anthony Vaccarello that was elegant with an edge.

Also present were the real ‘rebels,’ oblivious to the theme, ignoring the punk part to focus on couture. Anna Wintour went for a floral (yes, floral) Chanel dress, Gwyneth Paltrow wore a pink Valentino gown very prom ball, Cameron Diaz a petrol blue Stella McCartney dress and cape, although she did add a spiked belt to punk her outfit up.

Marc Jacobs came in a polka-dotted black and white suit, Sofia Coppola at his arm, dressed in pajamas from Jacobs’ collection. Julianne Moore was simply chic in a classic origami fold green dress by Balenciaga.

And then, there were the outsiders, personalities carrying their garish style as a trademark, modern slaves of their own clothes, redefining bad taste with every outfit. The Olsen sisters as always très boho-chic, the YouTube sensation and rapper Psy in a black and red tartan version of the tuxedo with a bow tie, and Kim Kardashian dressed from head to toe in a wallpaper floral dress by Riccardo Tisci for Givenchy. (Pass the bag, won’t you? – Ed)


Alexander McQueen said: “You’ve got to know the rules to break them. That’s what I’m here for, to demolish the rules but to keep the tradition.” He was certainly missed on a night where punk seemed to be confined in clichés and chaos silenced by the need to play the part directed by Vogue.

Punk rockers may be rolling in their graves. Saying that the event was a fashion circus is an understatement. Of course, the irony was inevitable: the very theme of the exhibition and its translation into clothing brings back memories of rebellion, anti-establishment, anti-authority and non-conformist singularity. But it all vanishes at the first step on a red carpet where everybody was supposed to look the ‘trend’ and where the elite invited is anything but an image of a group that was once so disobedient.

Johnny Rotten was probably watching it in a pub somewhere, murmuring to himself: “God saved the Queen, & her fascist regime” He would be right: the celebrities at the Met were pretty vacant. Have another pint on us, Mr Rotten. You earned it. DM