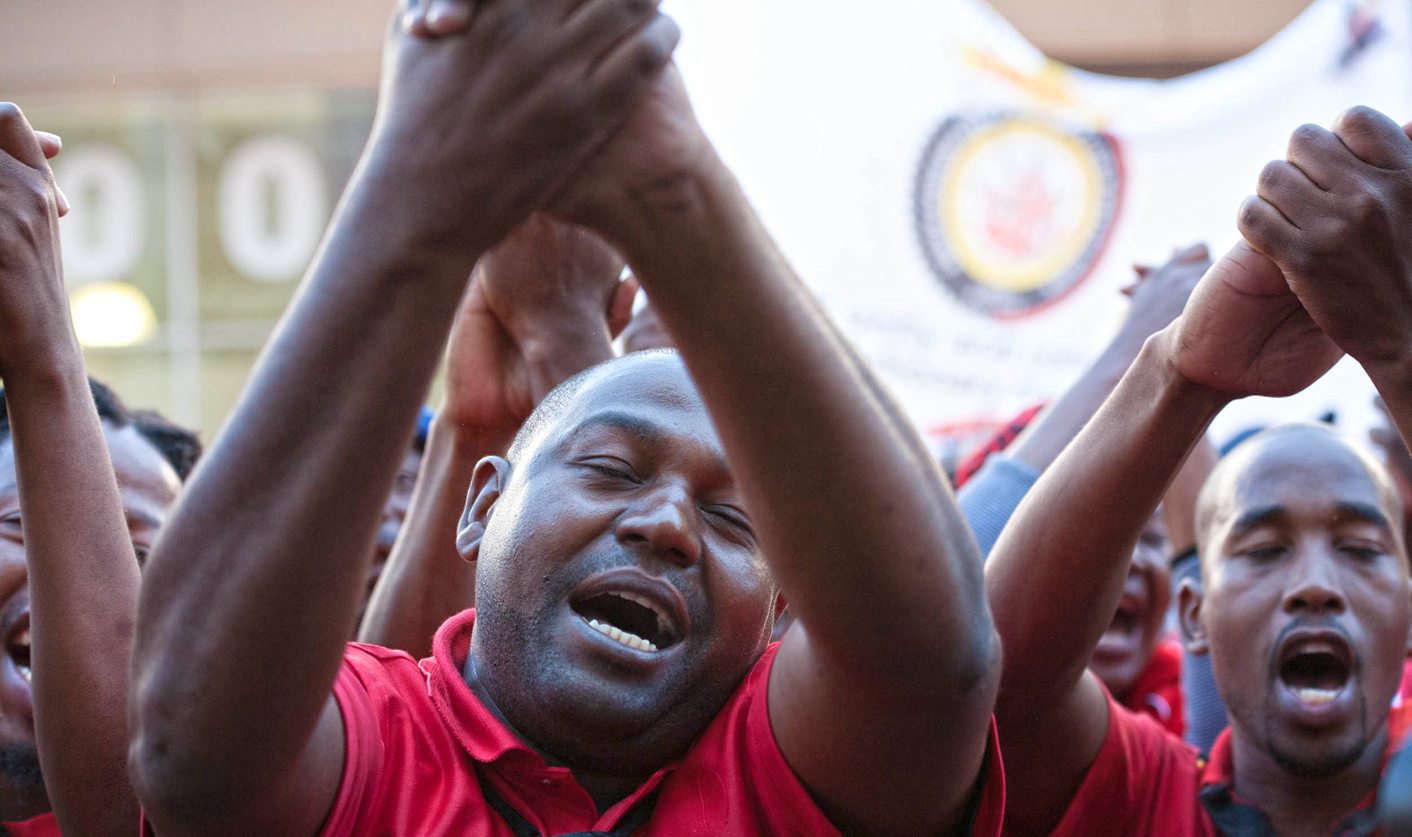 The South African Transport and Allied Workers Union (Satawu) marched through Johannesburg CBD on Tuesday after almost three weeks of industrial action. The bus drivers’ strike has been making life difficult for commuters and things are about to get worse. Satawu is likely to demonstrate again on Friday, bringing the Johannesburg CBD to a standstill as it steps up its demands. By GREG NICOLSON & THAPELO LEKGOWA.

Satawu’s march started almost two hours late after members trickled into Peter Roos Park in Parktown. About 500 demonstrators followed both union and provincial Cosatu leaders into the Johannesburg CBD to drop off memorandums at the Bargaining Council for the Road Freight and Logistics Industry, the Private Security Sector Provident Fund and SA Police Service. “These are just the shop stewards,” said one member. “Wait until Friday.”

This Friday, transport unions will have been on strike for three weeks. They are demanding a 13% pay increase (some members said it was still 18%) and allowances for housing, night shift, and travel. Employers are offering 9%. Satawu has continually emphasised the need for a double-digit wage increase due to the rising cost of food, housing and fuel.

Photo: Satawu workers march through Johannesburg ahead of a planned march on Friday that will bring the CBD to a standstill.

Satawu is also upset about the alleged attacks on its members. The union says there is a “list of assassination plans” targeting the general secretary, president, deputy general secretary and four provincial leaders. It says members and employees of  Prasa (the Passenger Rail Agency of South Africa)  have had their houses petrol-bombed and thugs came looking for general secretary Zenzo Mahlangu at his house.

Cosatu Gauteng provincial secretary Dumisani Dakile and chairperson Phutas Tseki were present at the march representing the federation of trade unions. Dakile said Cosatu fully backs Satawu’s demands as the cost of living is increasing and employers are “drunk with profits”.

Vincent Masoga, Satawu national spokesman, told Daily Maverick the march was not a part of the bus drivers’ strike but was planned in response to other issues. Primarily, the union was demonstrating against the police commissioner, private sector security and the national bargaining council for transport and cleaning, both of which it accuses of failing to represent workers’ interests. Satawu has the police in its sights because it’s been frustrated by the SAPS response to the threats to union leaders.

Photo: A schoolboy runs alongside the march, dancing with the protestors.

“Naturally there were messages of solidarity for the bus drivers,” said Masoga. Negotiations to find an end to the bus drivers’ strike will continue on Wednesday. The industrial action has affected Rea Vaya, Putco, Gautrain, Golden Arrow and MyCiti services. Failing a resolution, the union will intensify the strike and march on Friday through Johannesburg with many more members.

Satawu members, like those of other Cosatu-affiliated unions, sang while marching, directing their anger at those they’re unhappy with. “Nge razor nge razor sizo a susa a masende e council” (We will cut your balls off with a razor) they sang to the bargaining council, which they believe is colluding with employers to keep salaries down. And, as is a feature of most strikes these days, the protestors also sang about Marikana.

Going through town the march scared a number of business owners with them closing their doors until the crowd passed. Street vendors cleared their stands, worried that the comrades would repossess and redistribute.

Satawu leaders made it clear that Tuesday’s march would be nothing compared to what’s to come on Friday. They didn’t threaten violence and at times told the comrades to be disciplined (particularly when some marchers weren’t happy with a female representative receiving a memorandum). On Friday, however, it might be harder to control the marchers.

A truck drivers’ strike last September was marred by violence in cities across the country. Protestors demonstrating on roads stopped passing trucks, verbally abused the drivers, stoned their vehicles, and even set alight some vehicles. Satawu denied its members were involved and blamed criminal elements.

Commuters have been hit hard by the strikes, which leave them with no option but to take more expensive and often less efficient forms of public transport. Speaking to Sapa, the Cape Chamber of Commerce and Industry’s Michael Bagraim predicted commuters who have to borrow money for the more expensive transport, often taxis, will go into debt.

Photo: A Satawu demonstrator raises a fist in front of the union banner.

With absenteeism and staff coming late to work, the industrial action is also hurting the economy. “[Commuters] ended up paying three times their normal bus fare. They are also landing up with all sorts of disciplinary problems at work. Obviously the employers are complaining specifically because the jobs are suffering,” said Bagraim.

The bus strike has highlighted the lack of public transport options for commuters without cars. When it began almost three weeks ago, queues of passengers could be seen stretching through taxi ranks across Johannesburg as people were left stranded. According to Cosatu general secretary Zwelinzima Vavi, taxis are “moving coffins”. Speaking at a march against e-tolls last year, the union leader demanded that government address the needs of the poor by developing sufficient public transport infrastructure. DM

Main photo: Satawu workers march through Johannesburg ahead of a planned march on Friday that will bring the CBD to a standstill.