The top spooks’ Gupta warning – which cost them their jobs 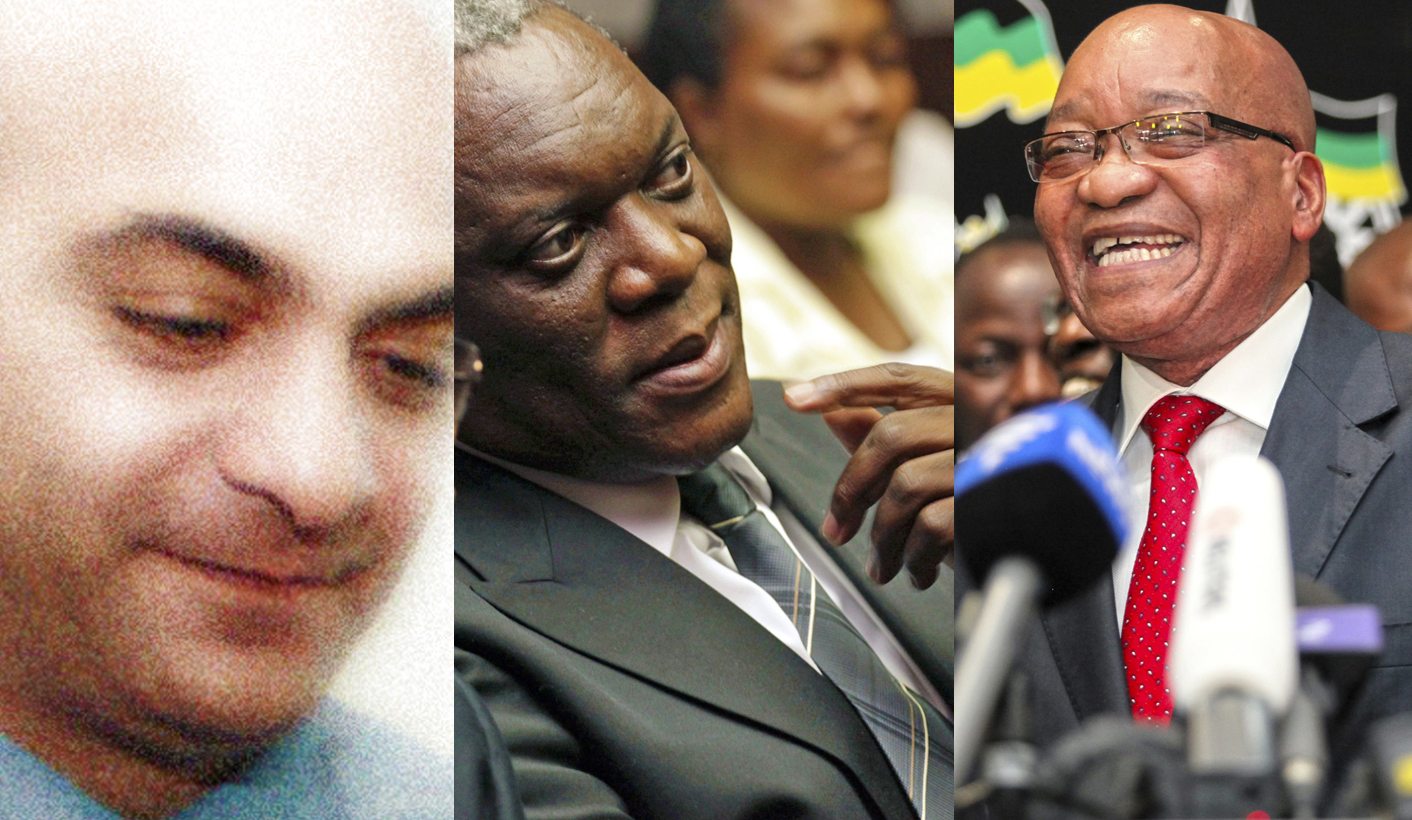 A persistent question following the Gupta jet being allowed to land at Waterkloof Air Force Base is “How could this have happened?” The answer is rooted in debacle in the Department of State Security two years ago, when the former intelligence heads tried to warn government that the Gupta brothers posed a possible threat to national security. But their investigation was stymied, leading to them losing their jobs. Therefore the phalanx of Cabinet ministers and senior government officials now claiming to be mystified about the security breach need to look no further than the State Security Minister Siyabonga Cwele and President Jacob Zuma. By RANJENI MUNUSAMY.

The only direct comments by President Jacob Zuma on the raging controversy surrounding the Gupta family was that the situation should be handled with care so as not to jeopardise diplomatic relations with India. In an interview with the SABC after a visit to the Congo, Zuma said the Indian High Commission could not be blamed.

In an effort to limit the diplomatic fallout following the irregular and private use of a national key point by Gupta wedding guests, Zuma said the High Commission had made an application requesting to land at Waterkloof Military base, but the application was wrongly handled.

“But of course it’s important to know that you are dealing with citizens of another country, India, there are diplomatic relations so the manner in which we handle that it must be handled in that understanding,” Zuma said.

Fair enough. It would not be in South Africa’s interest to raise such a stink over the role and conduct of India’s diplomat in the matter such that it causes a strain in relations between the two countries – both partners in BRICS. While South Africa is considering issuing a demarche, the highest diplomatic rebuke, due to the Indian High Commissioner Virendra Gupta circumventing normal procedures to secure landing rights for the private jet, they would not want to dent relations, particularly trade, with the Indian government.

During the interview, the opportunity then presented itself for President Zuma to say: “However, I take exception to business people, whoever they might be, using my name and my relationship with them to secure special privileges and abusing state facilities.”

That is all it would have taken to extricate the office of the president from the muck and to set the record straight. But even though Zuma is said to be angered by the behaviour of the Gupta family, in this instance, and is clearly supporting the multi-departmental probe into what exactly transpired, he still will not cut the brothers loose.

The relationship between Zuma and the Gupta brothers has befuddled even his closest comrades in the ANC and the alliance structures. While Zuma has always had less than savoury relationships with business people, including those found to have contributed to the initial renovations at his Nkandla home over a decade ago, there is something extraordinary about the connection to the Guptas.

Whatever hold the Guptas have on Zuma has even resulted in the destruction of relationships forged during the liberation struggle.

Gibson Njenje, the former head of the State Security Agency’s domestic branch (previously called the National Intelligence Agency) was handpicked by Zuma to serve as his intelligence head when he became president. Njenje is highly respected in ANC intelligence circles, having served as deputy head of counter intelligence in the ANC’s department of intelligence and security in the underground.

While Zuma consulted with other leaders in the ANC, the SACP and Cosatu over other high profile portfolios in his administration, Njenje was his first and only choice for the job. Njenje left the business sector to return to the civil service at Zuma’s invitation.

Several months later, he appointed Moe Shaik as his foreign intelligence head. Shaik and his brother Yunis ran a covert intelligence unit under Zuma when he was head of ANC intelligence. They became close comrades and friends, which led to Zuma being introduced to older brother Schabir. Even after Zuma and Schabir’s relationship was found to be corrupt by Judge Hilary Squires during the latter’s corruption trial, Moe maintained his relationship with Zuma, acting as the president’s confidante on political and private matters.

Jeff Maqetuka, who also served in the ANC department of intelligence and security from 1979 when he went into exile, was a director-general of state security agency. Maqetuka completed Zuma’s intelligence dream team, a triumvirate of directors-general he trusted unequivocally.

A few months apart, starting in 2011, all three resigned after a fall-out with State Security Minister Siyabonga Cwele. The source of the conflict, it turns out, was the Gupta family.

Alarm bells started ringing in the intelligence agencies about the conduct and dealings of the Gupta brothers and Njenje ordered an investigation into the family’s inappropriate influence on South Africa’s top political leaders and government officials.

When Cwele learnt of this, he ordered that the investigation be stopped immediately. Njenje, backed by the other two DGs, tried to warn that the Guptas behaviour constituted a “threat to national security” and if allowed to continue would compromise the credibility of the state. Cwele refused to listen or see whether there was legitimate cause for the investigation. This soured relations between Cwele and the DGs, which over the next few months deteriorated to the extent that the minister asked them to leave.

It was not as if Cwele pulled the plug on the investigation because Zuma told him to do so. He would not entertain any discussion about the Guptas being investigated because he was cognisant of the special relationship between the family and the president, and concluded that they needed to be protected from scrutiny.

During the stand-off Zuma became aware of the trouble between his three trusted spooks and his minister, and the source of the trouble. He did not intervene to stop their departure, leaving Njenje, Shaik and Maqetuka to hang out to dry. The Guptas continued with their wayward behaviour, unhindered, while Zuma’s three comrades washed their hands of the matter – and him.

Two years later, the warnings Njenje gave about the Guptas compromising the integrity and credibility of the state by bullying and influencing senior officials have now come back to haunt the Zuma administration. The family pulled off the most brazen act, arranging landing rights for their private jet at the Waterkloof Air Force Base without fear of reprisals. The Guptas became aware of the attempted intelligence investigation against them and the punishment meted out against the three DGs. Therefore, if they were not swaggering enough already, that incident showed them, and everyone else in government, that they were beyond reproach.

Their previous stunts allegedly include trying to strong-arm a former senior Government Communications and Information System official to buy government advertisements in their newspaper, The New Age, and instructing other directors-general on how they should award government contracts.

For the Guptas there have been no repercussions while those at the receiving end of their bullying have been fearful about complaining to their seniors. Njenje, Shaik and Maqetuka are not the only senior officials to lose their jobs as a result of the Guptas, as several others who balked at their instructions were shown the door.

The security breach at the national key point, however, provoked alarm and an extraordinary reaction by government. Five senior officials have been suspended or put on special leave and the security cluster of ministers have promised a swift investigation to determine how the plane was able to land and the 200 passengers able to enter the country.

However, all the ministers and officials who were trotted out to show how seriously government is taking the matter know full well why the Guptas got away with interfering with the state up to now. They could have been stopped in their tracks two years ago if government took heed of the warnings of the intelligence heads. Ironically, the acting head of the Department of State Security, Dennis Dlomo, is among the high-powered team of top government officials tasked with investigating the Waterkloof landing. Perhaps Dlomo’s task would be to come up with information other than what came up in the aborted investigation in 2011.

But if government really wants answers, it needs to look in its intelligence archives. And if President Zuma really wants to preserve the integrity of the state, and to put our country’s interest above everybody else’s, he needs to look into his own friends first. The Gupta brothers have been allowed to run roughshod over South Africa for way too long now. DM