SAPS: Mdluli on the rise again, while rumours of the coming purge persist 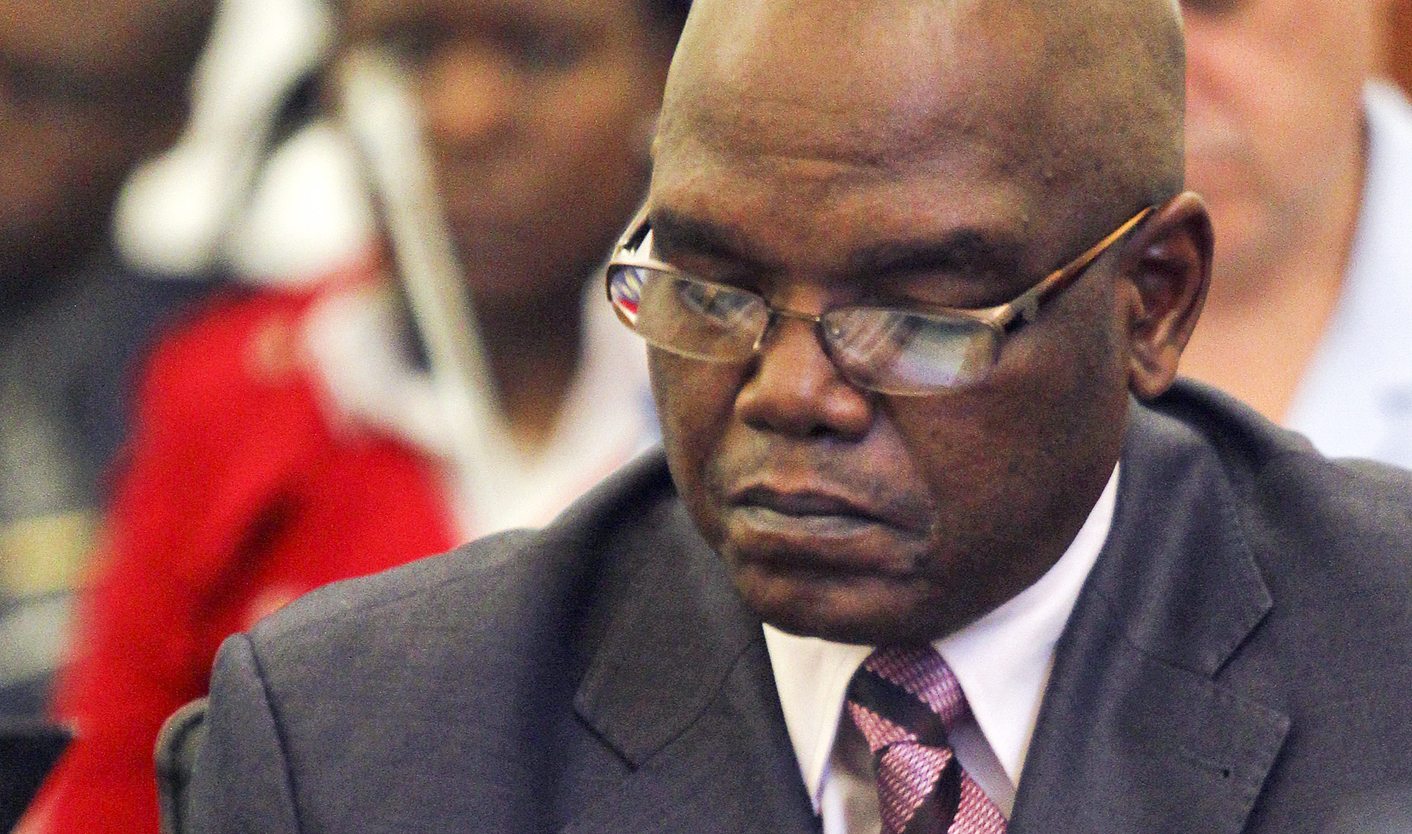 A fierce battle for superiority is being fought behind the scenes in the top echelon of the South African Police Service as the crown prince, and suspended spy boss Lieutenant General Richard Mdluli, is waiting in the wings to make his comeback as President Zuma’s top crime fighter. While Mdluli is regarded as the pivotal figure in the relentless spy wars between political rivals, the secret lobbying in the SAPS as well as in ANC cadres indicates that several top generals face the axe – including national police commissioner, Riah Phiyega, writes DE WET POTGIETER.

Although Mdluli’s name was cleared in November last year when Benoni magistrate Jurg Viviers ruled that he would not stand trial on charges for the murder of his former love rival, Oupa Ramogibe, it was also the run-up to the Mangaung conference and emotions ran high: the political climate was simply not ideal for him to just walk back into his old position as crime intelligence boss.

Tactically it would have been a poor move for Zuma to allow his political ally back into the fold, amidst the uncertainty he was himself still facing at the time.

Judging from information leaked by reliable sources within the inner ranks of the SAPS, the time has come for yet another purge in the police. This time it will be the crime intelligence unit which will be subjected to a night of the long knives, as there are secret moves to have top generals like the Hawks chief, Anwar Dramat, Gauteng police commissioner Mzwandile Petros and deputy national commissioner in charge of crime detection, Godfrey Lebeya, take the fall.

Rumours abound within the inner circles of the police service, and the Daily Maverick was told reliably that the re-positioning between the different political factions in the SAPS was being watched closely by those standing on the sidelines. These observers say they sense the relentless battle to strengthen the Zuma faction’s hold on the general staff.

For corrupt police officers in SAPS, as well as corrupt politicians and government officials, this means a matter of life and death for their careers – and securing the removal of Dramat and Petros will be pivotal.

It is common knowledge that the Petros and the Gauteng head of the Hawks, Shadrack Sibiya, do not get along very well. In fact, Petros had Sibiya move offices from the provincial headquarters, where their offices were right next to each other, to the organised crime head office in downtown Johannesburg just over a year ago.

Daily Maverick was told that Phiyega’s dismal performance at the Marikana commission of inquiry was the last straw for her future as national police chief, and she is also expected to be sidelined.

Still, even with all the secret moves and lobbying to pave the way for Mdluli back into the SAPS, all will not be plain sailing for him.

Daily Maverick exposed in detail last year that there were still several stumbling blocks in Mdluli’s way. When Mdluli was exonerated for murder last year, the magistrate referred to a “sinister plot” to derail his career by forces within the police, and that was the main reason for the resuscitation of the Ramogibe murder case more than a decade ago.

Mdluli’s name was cleared more than seven months ago, but intelligence sources then told Daily Maverick that a move to reinstate him would only be made after the Mangaung conference.

In December last year, Daily Maverick published details of a damning report of a meeting between British intelligence (MI6) agents and two top members of the SAPS’ crime intelligence two years ago, where plans to “expose” Mdluli were discussed.

The document is a situation report based on the transcription of tapes from another intelligence agency who bugged the meeting.

The meeting, which was held in the run-up to the 2010 Soccer World Cup, was over dinner in the popular Pretoria restaurant, Cynthia’s. At the dinner were the former head of crime intelligence’s operational intelligence analysis section, Major General Mark Hankel, and Colonel Marinda Loots, from the unit’s counter-terrorism centre.

The report, which is in Daily Maverick’s possession, states that Hankel was “very talkative and boastful” that evening in the restaurant, but at times indicated his irritation because he did not get the appointment as crime intelligence chief. He regarded himself as the more experienced candidate for the job, and said Mdluli was a political appointee with no knowledge of intelligence work or managerial skills.

“This created a very bad image of Mdluli with the British intelligence people, who were clearly good friends with Hankel,” the report states. Hankel allegedly told the guests that he had done his research on Mdluli and come across a cold case that would expose him. When asked how he would be able to revive old cases, he said he knew the right people to re-open criminal cases and he would take it from there.

According to the report, a lot was said that night around the restaurant table, and although some of the conversations were difficult to follow on the tape, it was said that Mdluli was involved in a murder a long time ago.

The withdrawal of the murder charge was not the end of Mdluli’s woes, either. In the meeting in 2010, Hankel described at length how senior police officers bought their vehicles through one “Barries” – real name Colonel Hein Barnard – from motor dealers. Barries, as the supply chain manager for crime intelligence’s secret services account, was the man who handled all the acquisitions of official police vehicles through the secret slush fund and arranged that police officers received special deals for their private vehicles as if they were state-acquired vehicles.

Mdluli, together with Barries, was arrested in September last year on charges of fraud and corruption.

Now, Hankel’s role in bringing down Mdluli is becoming clearer. During the 2010 meeting discussed in the report, Hankel added that Marinda Loots, the colonel who was also present, assisted him in the research to get all the information in order to build the cases against Mdluli. According to the report, Loots agreed during the conversation with Hankel’s statements.

More recently, however, Loots declined to say anything when approached for comment. Hankel, for his part, was not available, and Brigadier Phuti Setati, acting head of corporate communications, said the SAPS had no knowledge of any alleged meetings and could not comment on the matter.

Hankel, Mdluli’s former number two, is a very powerful officer in the unit and was always seen as the main rival of Mdluli for the top post. He was instrumental in drafting the controversial secret report presented to the inspector general of intelligence, Faith Radebe, earlier last year, outlining the allegations of fraud and misappropriation of the slush fund against Mdluli.

With indications now that Mdluli is on his way back, it is believed that he will also embark on his own mini purge of police officers he sees as the enemy. It would be especially interesting to see how he handles an explosive dossier regarding Hankel. Senior colleagues of the acting head of crime intelligence, Major General Chris Ngcobo, told the Daily Maverick last year that Ngcobo was sitting on this dossier, on which he had not acted.

The dossier recommends that action be taken against Hankel regarding the leakage of information, the illegal interception of telephone conversations of other government departments, and the use of the Secret Services Account (SSA).

Soon after his arrest last year, Mdluli showed his hand when he passed the so-called Ground Coverage Report to President Jacob Zuma, in which it is alleged that certain high-profile ANC leaders, including Human Settlement Minister Tokyo Sexwale, KwaZulu-Natal Premier Zweli Mkhize and Bheki Cele, plotted to overthrow Zuma. (These claims of a conspiracy against Zuma were vehemently denied.)

Sources close to Mdluli afterwards said he should have waited until his acquittal on the murder charge to release this explosive document, as it would have had much more strategic impact if he had released it just before the Mangaung conference.

The fact is, there is a lot repositioning and political lobbying currently underway within the SAPS – to which proper and decisive crime fighting must surely take a back seat.

Top police sources indicated their displeasure with this situation to Daily Maverick, saying that they were expected to fight and investigate crime successfully under bosses who were more concerned with political brown-nosing than working effectively. DM