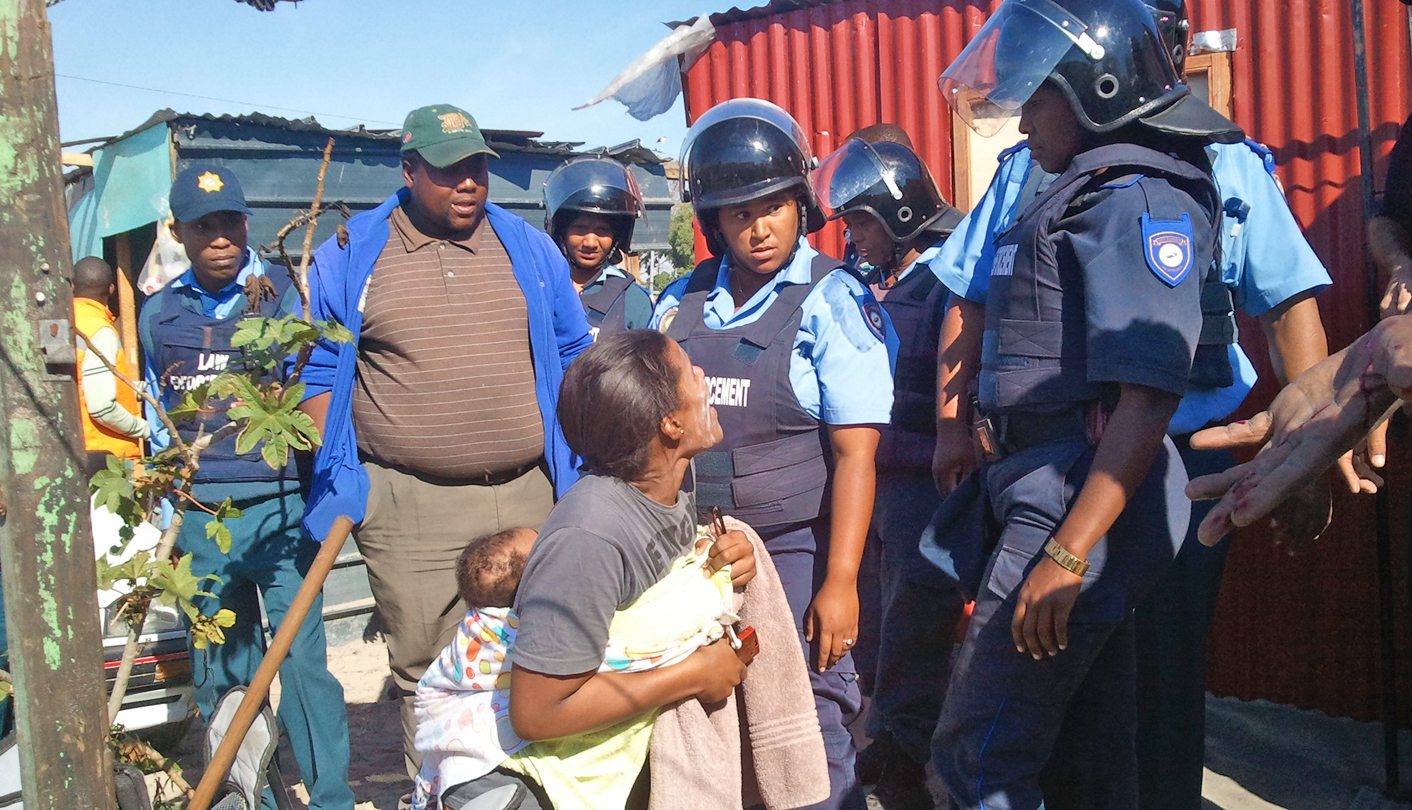 I found myself among a community of homeless and backyard-dwellers on Sunday through connections with the shackdwellers’ movement Abahlali baseMjondolo, which held its controversial UnFreedom Day rally on 27 April in the settlement of Sweet Home Farm in Philippi, Cape Town. What follows is a personal account of the beginnings of the 'Marikana' land occupation. By JARED SACKS.

These residents of Philippi East, a growing township sandwiched between Nyanga, Mitchell’s Plain, Khayelitsha and Philippi, had just been evicted the week before from another parcel of land which they found out was actually a deserted privately owned farm. Desperate as they were, they contacted Abahlali baseMjondolo activist Cindy Ketani, in the hope that she could help them in their struggle. By Thursday, Ketani said that 150 of them had paid the standard R10 fee to become members of the movement and were looking for another piece of land since they had nowhere else to go.

Photo: A community meeting on Sunday in anticipation of their eviction (Jared Sacks)

Some of them began building their new homes on unused council-owned land along Symphony Way near Stock Road. Six homes were fully occupied by Friday morning with another 15 or so built and occupied on UnFreedom Day. Those who did not have their own building material, spent the day helping fellow abahlali (residents) finish building their homes. This was solidarity: the community was helping pull one-another up by their collective bootstraps. According to chairperson Sandile Ngoxolo, abahlali christened their new settlement ‘Marikana’ in honour of the workers who died in their struggle for a just and living wage and because “we too are organising ourselves peacefully and are willing to die for our struggle”.

When I arrived on Sunday morning with Ketani and Boitumelo “Tumi” Ramahlele, who live in Langa Temporary Relocation Area (shacks built by the Housing Development Agency), the city’s Law Enforcement had just arrived and marked off with spray-paint a red “X” on about 20 homes. They said they were to be evicted later that day. People were worried and didn’t know what to do and soon a crowd grew to discuss the way forward.

Photo: According to Cindy Ketani, the female police officer at the centre of the photo pepper-sprayed her and stole her cell phone. (Jared Sacks)

The City’s Law Enforcement, with its substantially funded Anti-Land Invasions Unit, had not produced a court order or any type of written documentation as to why the settlement was to be evicted. Being a witness to these kinds of struggles for a long time, I knew that any eviction without a court order was not only an illegal act, but also criminal, as the city was ignoring provisions in South Africa’s Constitution and the Prevention of Illegal Evictions Act. Explained a different way, the Anti-Land Invasions Unit is usurping the authority of a high court judge who is tasked to decide on the legality of land and property related issues. There is no way to prove that those living on a particular piece of land are there illegally without a legal judgment. (See also lawyer Sheldon Magardie’s legal explanation).

A call was sent out by Abahlali baseMjondolo for activists and media to come and witness and protect residents during the illegal evictions – only a New Age reporter showed in time to see the evictions take place. A lawyer working pro-bono with Abahlali baseMjondolo arrived and explained the need for a court order to the city officials, but he was rebuffed.

At 13:15 a mass contingent of the Anti-Land Invasions Unit and dozens of day labourers, picked up only hours earlier, arrived, backed up by Law Enforcement and SAPS vehicles. They were ready for confrontation and a Casspir and a Nyala ensured that this would be a one-sided war against about 50 residents (mostly women and children).