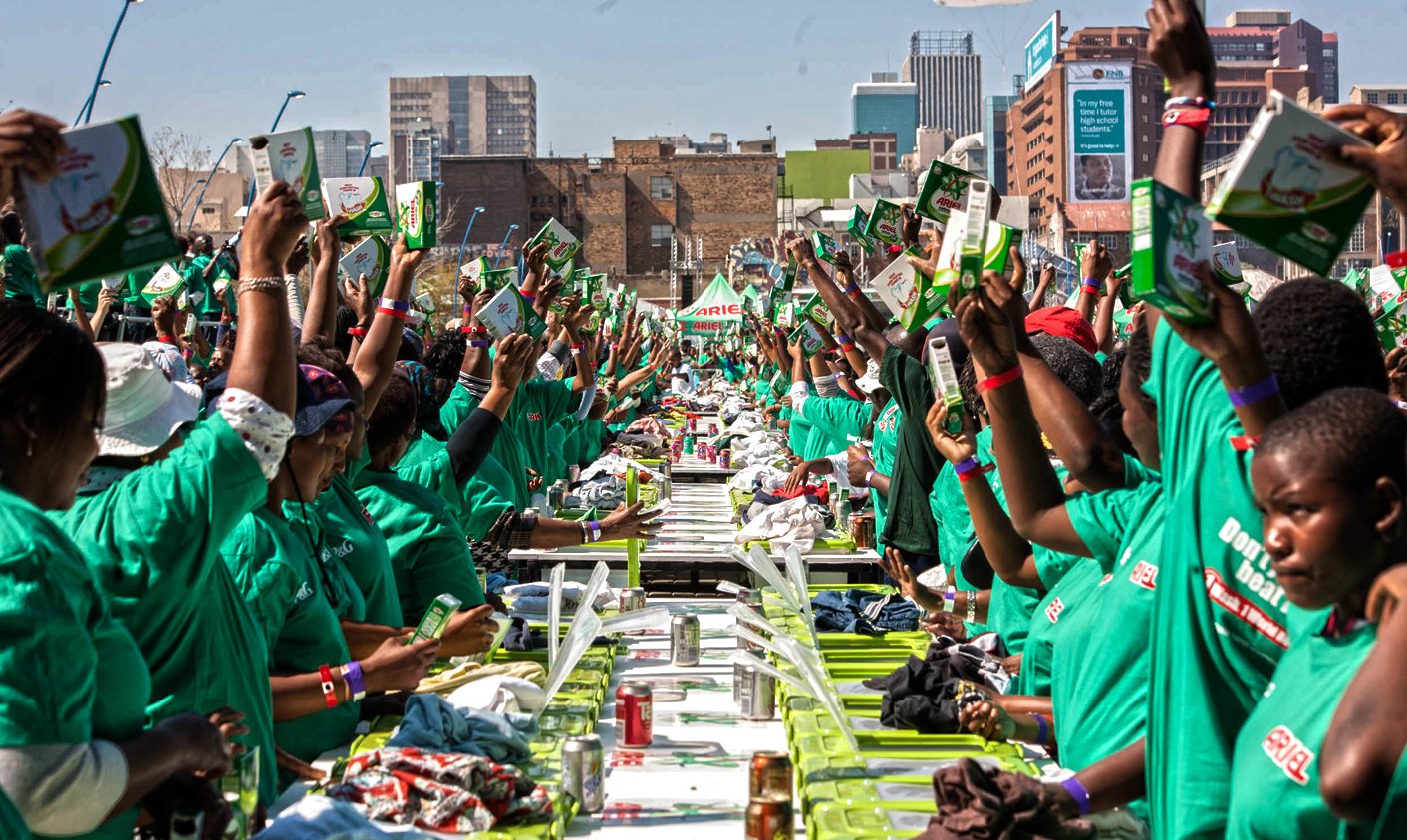 From Omo to Sunlight, hand-washing detergent ads suggest black South African women are happiest with their hands in a tub of water while scrubbing stains. So as a new player in the game, what do you do? Repeat the stereotype, but break a Guinness World Record. Detergent brand Ariel did just that on Wednesday. By GREG NICOLSON.

At some point in your life the Guinness Book of World Records is cool. It’s your ticket to fame in a world where everything’s already been done. If someone can get into the hallowed pages of history for squirting milk out of his eye, what’s to say you don’t have the talent to take a record of your own? Eventually, though, you realise Guinness is the realm of marketers and, well, people wanting to be famous for weird stuff. Records worth caring about don’t particularly need the book’s stamp of approval, do they? It’s unlikely Usain Bolt was thinking about it when he ran the fastest 100 metres in history.

There was something profoundly unsettling watching over 1,000 people gather in Johannesburg’s Mary Fitzgerald Square on Wednesday to break the Guinness World Record for the most people hand-washing clothes at the same time. Perhaps it was the MCs. As the participants waited at their washing stations, ready to make history, the MCs reminded them that they’d be going where few South Africans had ever been. They’d be showing that South Africa is united. They’d prove to the world that right there, with only some washing detergent and water, South Africa could overcome. “Don’t let your country down!” said one MC from the stage after he repeated the instructions: wash to left, rinse to the right. (A real-life Guinness official was present, so it was important to get it right.)

Perhaps it was the participants. Granted, there was a mix, but the majority were black women, many from the townships. Who else would Ariel want to use when launching a new hand-washing detergent? They were collected on Wednesday morning by buses – the old politics trick – after hearing about the event through women’s groups. On offer was not just the chance to make Guinness history. They were told they would get lunch, cold drinks, a free t-shirt, and of course a sample of Ariel washing powder. In Newtown, they stood in the sun for hours while waiting for their moment to shine/wash. Among them were elderly ladies who struggled to stand.

Perhaps it was the stereotypes, orchestrated and repeated until they’re considered true. There was the international brand (Ariel is a top Procter & Gamble label across the world) adopting a local phrase (“kayi-1” – “one time”, suggesting stains will come out in one wash) to reach its market. Music was playing and the MCs were pumping the crowd, who by this stage were smiling and dancing, recreating the image of the black female enjoying herself while having to hand-wash clothes over a tiny tub. Add a few gospel songs in the mix and the promise of a well-known performer, after the job is done, of course, and you have yourself an advertisement for women who have to hand-wash their clothes… by women happily hand-washing clothes.

Likely, it was the two sides of the spectacle. There were the event managers, marketers and VIPs – the ones running the show, looking to profit from it, those more likely to have a maid than hand-wash their own soiled garments. On the other were the participants – those more used to soap and a tub, who were bussed in and out, left standing in the sun, and told what to do and where to go. Like the township and suburb, the difference was stark, and yet there were those also who moved in between.

What brought them together was the combination of a washing detergent and a ridiculously large event to bring attention to it. Ariel, out of the kindness of its corporate heart, wanted to offer South Africa something to be proud of: a record, The Record. In return it would get the publicity it wants to make Ariel a profitable brand in the country.

As ridiculous as it sounds, it was important to the participants. Some said they were proud to be there and repeated the MC’s hackneyed phrase: in 50 years’ time, they could tell their grandkids that on this day, 1 May 2013, they were part of a record-breaking achievement. It’s brilliant for the detergent company.

But what does it say about South Africa when there are so few sources of hope and chances for recognition that we have to cling to a hand-washing record that in all regards was a marketing ploy? DM

Photo: Participants at the event were instructed and motivated by MCs and entertained by music and dancing acts.

Photo: A participant in the record-breaking wash carries a tub past the wash stations.

Photo: A Guinness World Records official inspects the attempt while participants wash a garment each over five minutes.

Photo: The event is filmed by a camera crew.

Photo: A child sits on his mother’s back while participants wait to begin washing.

Photo: Participants at the Ariel event find a seat while they wait for the record-breaking to start.

Photo: Confetti fills the air as it’s announced that the Guinness world record has been broken.

Main photo: During the course of the day it was clear that there was one reason why everyone was there: Ariel washing powder. Just in case someone forgot, the MCs continued to instruct the crowd to shout its name and local catchphrase. (All photos by Greg Nicolson/ Daily Maverick)