ATM bombings: Mine bosses could take the ultimate fall 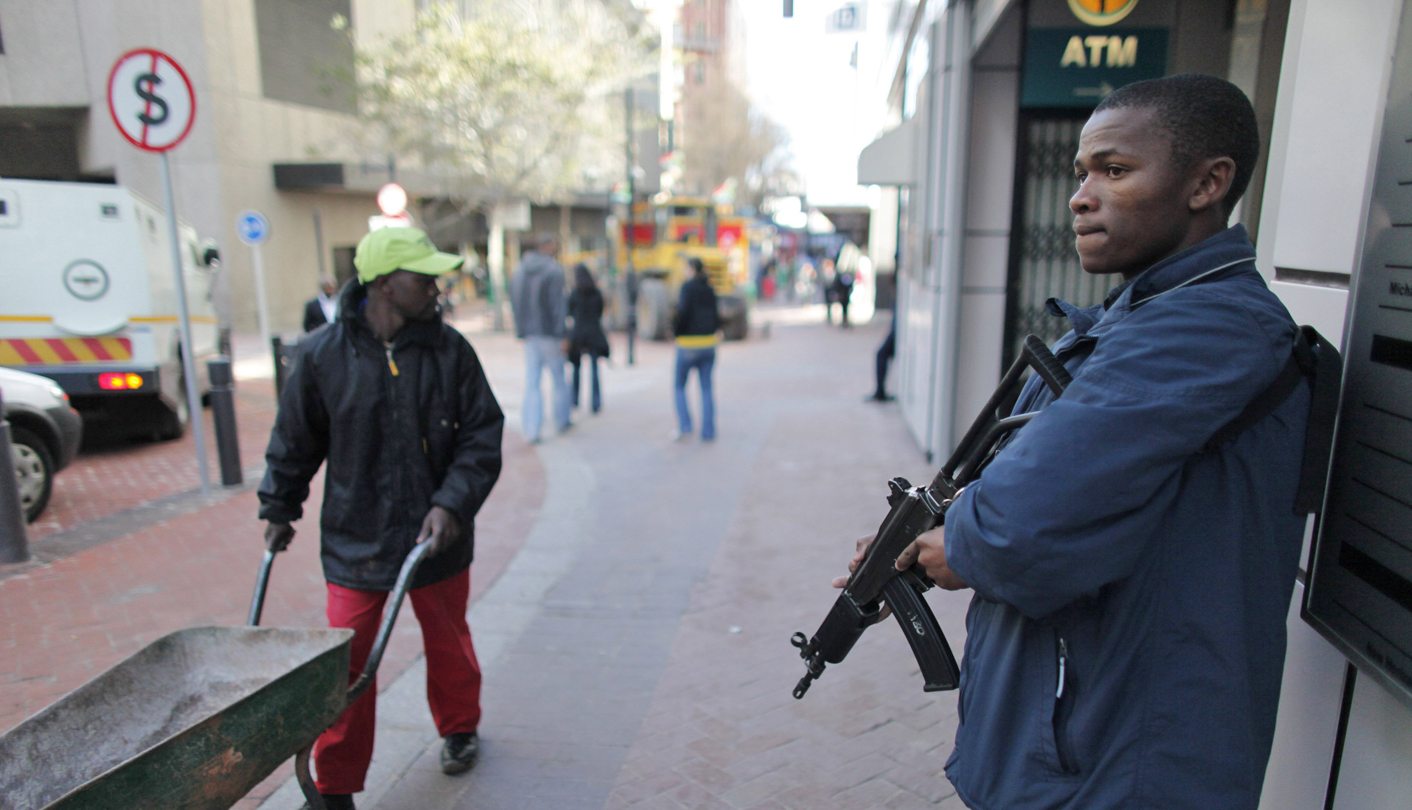 Mine bosses are in for more tough times. Stress abounded when Daily Maverick last week exposed the high salaries being paid to unionists by the very people from whom they are supposed to protect their members. Now, it seems mining bosses may face criminal charges for the ATM bombings endangering the country’s banking industry, writes DE WET POTGIETER.

As the wave of ATM bombings throughout the country continues, security experts and intelligence sources have voiced their concern over large amounts of explosives going missing from South Africa’s mines. According to mine security sources, it is almost impossible to properly monitor the illegal removal of stolen explosives – and it is widely believed that many of the commercial explosives used in ATM bombings originate from mines.

Unfortunately, the problem is particularly difficult to control, say sources within the mines. When search and seizure operations are launched to find stolen explosives on miners as they finish their shifts, those miners still waiting down in the shafts are forewarned and have time to dispose of any evidence.

The magnitude of the problem, too, poses challenges. Following a spate of ATM bombings last year in the Rustenburg area, which is surrounded by scores of mines, the local newspaper, Platinum Weekly, described the situation as an “ATM War Zone”. (It added tongue in cheek that South Africans should expect ‘Report ATM bombing’ to be added to the list of automated answering services at banks.)

Meanwhile, according to Daily Maverick’s sources, all the executive officers of mines in Gauteng were called to a meeting convened by Gauteng police commissioner Mzwandile Petros, where they were told “in no uncertain terms” that they would personally be held liable and charged, should criminals be apprehended who were using explosives sourced from mines or mining operations.

The mine bosses were reminded that they, as accounting officers, had to be compliant in terms of the legislation governing the transport, use and storage of explosives by mines in South Africa.

Daily Maverick was told that the mine bosses didn’t take this warning of criminal charges lightly, and instructed their legal departments to consult with security experts and put proactive measures in place.

While there are indications that some mine blasters may be involved with the gangs in the ATM bombings themselves, others use their expertise as master blasters in teaching these criminals the art of blowing things up for a fee.

The low percentage of arrests of ATM bombers also suggests that many of the gang kingpins are educated and very streetwise. Some are believed to have legitimate day jobs.

It also takes a high level of practical expertise to pull off an ATM bombing. According to Johan Burger, senior researcher at the Institute for Security Studies, only experts can ensure a controlled blast that will deliver access to the ATM without destroying the cash.

According to Burger, organised crime syndicates exploit weaknesses in the policing system and the lack of effective crime intelligence. ATM bombings are perceived as more lucrative, also, because they are less risky than cash-in-transit heists and there is always cash in an ATM.

Sewpersad notes that there is no specific definition for ATM bombings in South Africa – perpetrators are usually charged with a mixed back of other crimes, including theft or abuses of the explosives act.

“The explosives used in ATM bomb attacks have been identified as being ‘commercial explosives’ that are largely used in mines for underground blasting. The impact of such an explosion to a person near to, or in the close proximity of either the ATM or building housing the ATM, could cost them an arm, limb or even their lives. While the use of such explosive causes a danger to civilians, they also put the lives of the perpetrators who use them, in danger,” Sewpersad says.

Bongani Diako, spokesperson for the South African Banking Risk Information Centre (SABRIC), says ATM bombings are down 47% from last year, and adds that although commercial explosives are often stolen from the mines, some also disappear from above ground – for example from construction sites.

“In addition, while the attacks of ATMs with commercial explosives receive a lot of public attention, explosives are also used to attack drop safes, CIT vehicles and vaults for cash at institutions other than the banks,” he says.

The robberies result in significant financial losses for the banking industry, not least through infrastructure damage or the reinstallation of ATMs. The cost of replacing a bombed ATM can be anything between R150,000 and R300,000, depending on the location of the machine.

“What is particularly concerning is the violence accompanying these attacks and the loss of human lives,” says Diako. SABRIC is particularly worried about the injuries and fatalities suffered by security officials and law enforcement officers relating to ATM bombings.

Sewpersad concurs. “In addition to the danger of the explosives, perpetrators of ATM bombings are often heavily armed and ready to open fire on anyone who gets in their way or any response teams, for example the SAPS or private security that might arrive on the scene while the crime is still in progress. As a result of the ruthlessness of these criminals, numerous security personnel, employees and customers at petrol stations have been held up and beaten, police officers lost their lives and even perpetrators themselves have been killed in gun battles with police,” she says.

Sewpersad believes the risk of injury to perpetrators is significant. In one particular case an alleged bomber approached the bombed ATM to retrieve cash, but some of the explosives had not yet detonated and exploded unexpectedly, ripping off both his arms.

Burger indicates that ATM gangs may move between different provinces, depending on when police begin to focus on their previous ‘hot spots’. This means that there may often be a spike of activity in a certain area, which may just as suddenly decrease. The Western Cape, for example, experienced an alarming increase in ATM attacks since last year; by last December, there had been 25 ATM bombings in the province. Earlier this year, however, the Western Cape experienced two ATM attacks – one at a Phillippi petrol station, and another in Gugulethu.

Regardless of trends in ATM bombings, however, petrol stations remain at high risk for violent crimes. Staff at the Phillippi petrol station say they are extremely cautious at work: “We are scared to come out of our cubicle, because it is a dangerous area,” says petrol attendant Adam William. Another petrol attendant says he no longer works after dark, after being shot in the face in an armed robbery in 2008. The left half of his face is still paralysed.

During the investigation into the Phillippi bombing, police sources indicated that they were looking for a Johannesburg-based gang consisting of men “with military training”. The gang members are believed to originate from the Eastern Cape; they then migrated to Gauteng and moved on to the Western Cape when the north became too hot for them.

That particular case remains unsolved; however, there has been some progress in other cases. The Hawks made a major breakthrough in January this year when they arrested the twelfth gang member for a string of ATM bombings that had hit Kwazulu-Natal towards the end of last year. The gang was linked to similar attacks in Gauteng and Mpumalanga, and operated from a hostel in Soweto.

From their modus operandi it was clear they targeted ATMs in the rural areas, where the response time for the police and security guards was slower than in the bigger towns and cities.

After they were questioned, the gang took detectives to a house south of Kosi Bay, on the border between South Africa and Mozambique, where they found four firearms – including an AK-47 rifle, nine explosive cables and a stolen bakkie. The vehicle was stolen early in January in Booysens, Johannesburg. One of the arrested was the son of a Gauteng taxi owner.

In February, the police arrested five suspects – including a police officer in Kroonstad – for the murder of a policeman and the bombing of ATMs in the Free State. Warrant Officer Thabiso Maliela, 52, was killed when he drove past the Kagisanong shopping complex, near Mangaung, while robbers were trying to break open two ATMs there. A second policeman, who was with him, was wounded.

But police investigation is not the only way forward, say the experts. Burger believes the banking industry needs to change its perspective and move away from its policy of client-friendly and easily accessible spots for ATMs. Accessible to the public unfortunately also means accessible to gangs. “Banks will have to re-think the location of these machines,” he says.

ATMs inside buildings and convenience stores, he says, are far less vulnerable to bombings than those standing out in the open. DM