Police boss before Marikana operation: ‘There will be bloodshed’ 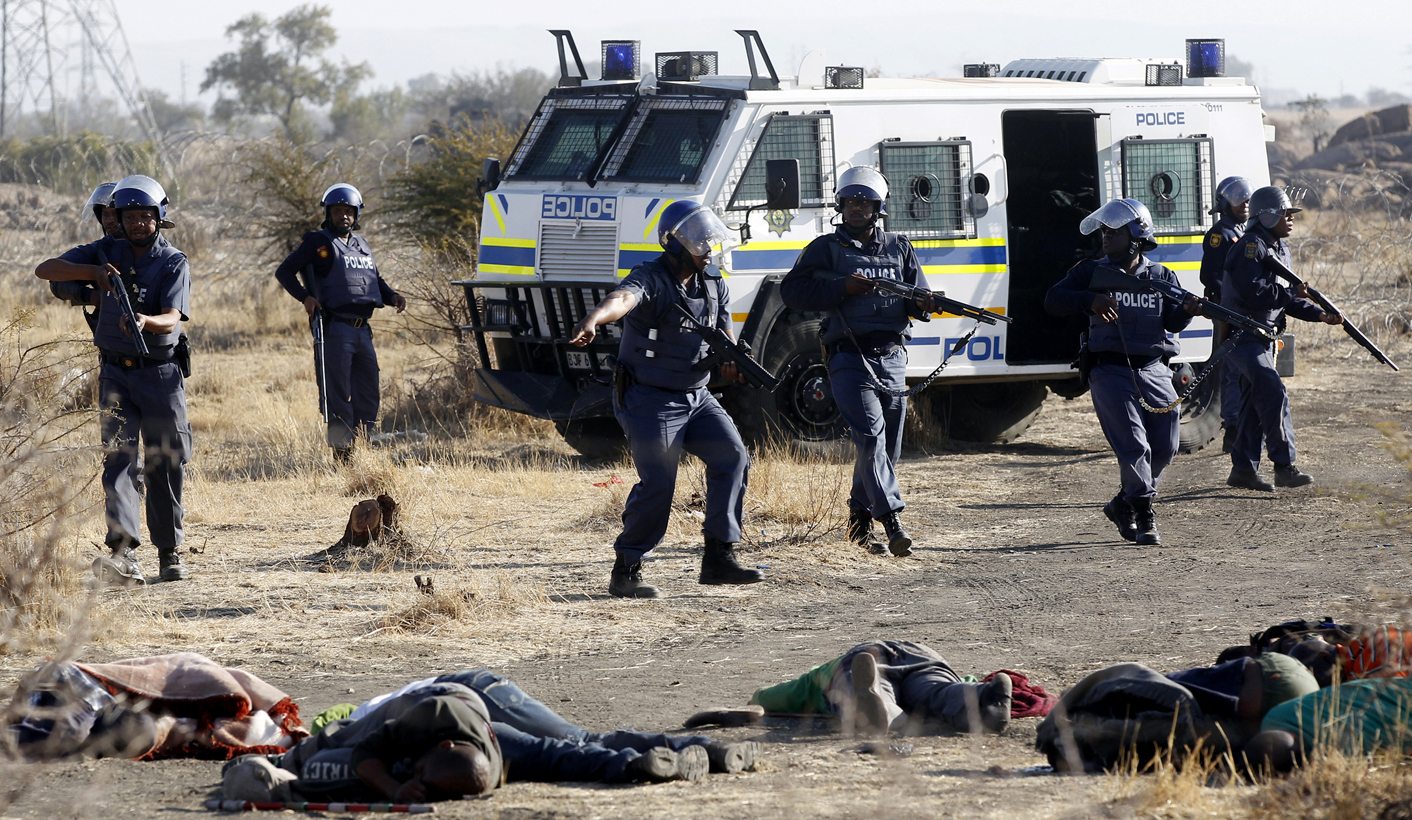 On Monday, the Marikana Commission of Inquiry heard that at least one very senior police officer could see no way of proceeding with the 16 August 2012 police operation without bloodshed. It’s a revelation that pours water on suggestions by other police bosses, especially the national commissioner Riah Phiyega, that a well-planned operation was unexpectedly disrupted, leaving the police with no option but to take lives in order to save their own. By SIPHO HLONGWANE.

The transcripts of meetings held between the police, Lonmin management and union bosses in the days before the 16 August operation that left 34 people dead and another 78 injured show that Lieutenant-General William Mpembe, the deputy police commissioner for the North West province, was worried that a grand intervention by the police to halt the impasse would make the situation worse, possibly even with the loss of lives. At the same meetings, the presidents of the Association of Mineworkers and Construction Union (AMCU) and the National Union of Mineworkers (NUM) discussed the difficulties they had with the crowd of striking miners, and it was made quite clear that tempers were frayed and tensions were extremely high.

This information was revealed at the commission set up to investigate the violent wildcat strike at Lonmin last year, and the deadly police operation that unsuccessfully tried to end it. Major-General Charl Annandale (one of the specialised top national intervention unit officers) was under cross-examination on Monday, asked to explain how he came to Marikana, and why the operation went the way that it did.

The reasons why Annandale and his units were called in are of great interest to the lawyers at the inquiry, as he heads units that fall under the SAPS operational response division. The SAPS website says that these units “stabilise tense crime situations where normal policing is not enough”. Some lawyers, including George Bizos SC, have argued that the presence of these special units shows that the stated intention and actual intention of the police on 16 August was different. The public order policing units were supposedly more than capable of handling the situation had they been present in adequate numbers.

Annandale was being asked about the state of police preparedness when he was asked to read transcripts of meetings held between Mpembe, AMCU president Joseph Mathunjwa, NUM president Senzeni Zokwana and Lonmin management on 15 August. It is clear that Mpembe was still in command at the time (though his boss Zukiswa Mbombo would suddenly take over the next day) and he is directly negotiating with the union presidents, the two men he believes can achieve a rapport with the protesters in a way that the police could not.

Mpembe makes it very clear that he believes without the successful intervention of Zokwana and Mathunjwa, there would be no peaceful resolution to the strike.

There are two interesting sections: in the first, Mpembe talks to Mathunjwa and Zokwana before they are both asked to go to the gathering area (Wanderkop) where the miners meet every day, and then there is a debriefing session afterwards. The reason for appealing to the two men was that police intelligence had gathered that some of the protesters were members of NUM or AMCU.

Both union bosses impress it upon the deputy commissioner that the situation is out of their control – by this point, nobody really believes that the strike is being orchestrated by NUM or AMCU – and they cannot really deliver surrender from the workers. (The AMCU boss manages to get the workers to agree to lay down weapons if the mine management agrees to meet with them, which does not happen at all.)

Mpembe then says that without that surrender, there would surely be more deaths. Keep in mind that he was very much in command on 13 August when he and other officers tried to corral a break-away group to disarm and disperse it. That did not go well – two police officers and three miners were dead by the time the dust settled. He was well aware of what the consequences of mounting a similar operation on a larger scale without first diffusing tensions would result in death.

In the first meeting, Mpembe asked Zokwana and Mathunjwa effectively to go and appeal with “their people”. He said: “I am here to do a humble request. We are now faced with a situation where we do not want to be seen as a police [service] that is a brutal human being. At the same time we do not want to be seen as the police who do not comply with the national [and] international standards. My request is one: we need both your intervention. The operation has reached a sensitive stage that we might go and lose more lives. We cannot lose more lives but the people out there are not safe.”

At the meeting after the expedition to the big koppie, Mpembe said that he still needed to strategise as to how to avert further bloodshed, which also meant preventing deaths amongst the miners. He says that there is a need to address the violence issue, but their intelligence is that the miners are armed and will not readily disarm.

“It is going to be bloodshed. We still have to resolve that,” Mpembe says. “We still have to resolve this, and we are no more prepared. We have already lost two police officers. We are no more prepared and we are going to lose more police officers. So I don’t know what you are going to do, but we are putting this to you as leadership, and we trust you that this is going to be resolved.

“We do not know how many people might die tomorrow, or tonight, but people are dying. I know that you also come up and say ‘why are police not intervening’, but they cannot intervene in a situation that is going to cause more harm than good”.

The inquiry must now decipher how Mpembe’s horrible premonition about the state of police preparedness and the mental state of the protesters apparently went unheeded as a disarm-and-disperse operation was rolled out despite the word from the union bosses to say that they couldn’t possibly convince the protesters to peacefully lay down weapons.

Outside of the presence of the NIU and Annandale, the Mpembe transcript raises some tough questions for Mbombo and Phiyega to answer. The former took over the operation at a delicate stage and the latter signed off on it before it began. Were they both aware that the police officer who was in charge at Marikana before 16 August thought that it would all end in deaths and tears if they could not somehow find a way to negotiate with the protesters before coming at them with heavy fire? If they were aware of this, why was he ignored?

It is also important to note that Mpembe is the only senior police officer to be arrested for what happened at Marikana and afterwards. He was taken into custody along with 10 other officers for torturing (or being there when the torture happened) some of the 270 protesters who were arrested on 16 August. He has subsequently denied being there at all, and has sued the minister of police for R1 million, for wrongful arrest. A spokesperson for the North West police said at the time that the deputy commissioner was with President Jacob Zuma at a meeting in Mahikeng when the assaults allegedly took place.

The commission of inquiry continues. DM

Photo: A policeman gestures in front of some of the dead miners after they were shot outside a Marikana, August 16, 2012. REUTERS/Siphiwe Sibeko