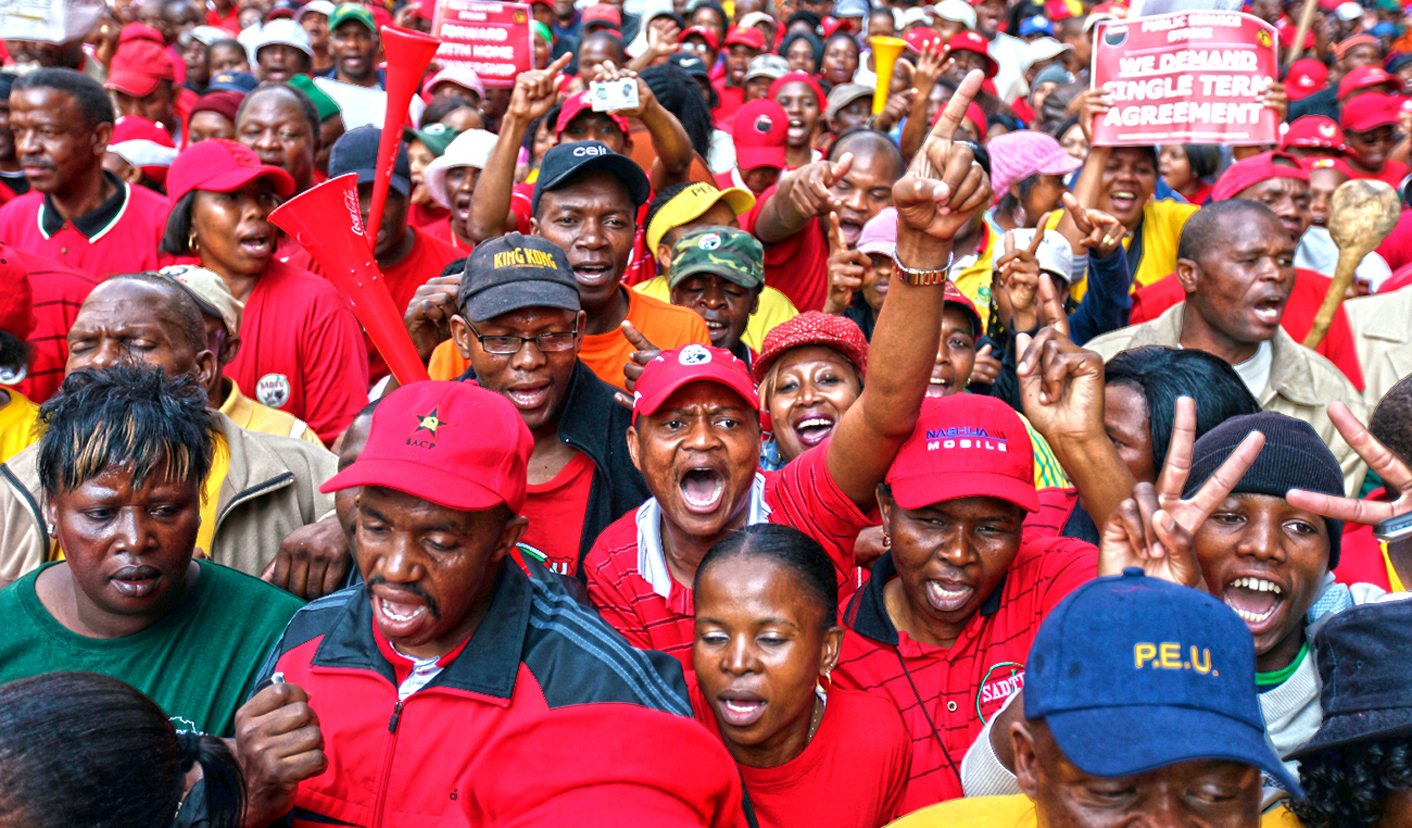 On Wednesday, at 25 Workers Day rallies across the country, leaders of Cosatu and its affiliate unions will fan out to enthuse and regroup workers in light of dwindling confidence in union representation. Strike season looms and worker militancy means the economy could be in for a pounding. Last year’s unprotected strike action and extraordinarily high settlements in the mining sector set a dangerous precedent that could cause trouble for unions and employers in wage talks starting in May. Politically, tensions within the alliance are set to mount further as Cosatu fights to retain the confidence of its members. By RANJENI MUNUSAMY.

The warning signs are flashing and dangers of the coming crippling strike season are evident. While teachers union Sadtu is threatening a full-blown strike and transport union Satawu kicked off the strike season with the bus drivers’ strike last week, wage talks in the mining, motor manufacturing, construction and chemical industries could make this a winter of discontent to remember.

Wildcat strike action in the mining sector in 2012 took a deadly turn at the Lonmin platinum mine at Marikana, and set off a domino effect in the industry, affecting platinum, gold and coal mines. While the sector is still in recovery and the National Union of Mineworkers (NUM) is still licking its wounds from losing thousands of members to the Association of Mineworkers and Construction Union (AMCU), they have to contend with the start of wage talks in May and a new round of demands.

In an effort to pacify their members in the face of lingering disgruntlement, the NUM announced on Sunday after a national executive committee meeting that it would demand from the Chamber of Mines a “double digit” pay increase as well as significant improvement in conditions of service.

“The National Executive Committee noted the number of companies that have issued section 189 notices and those that had made their intentions to retrench public in the wake of impending negotiations. Whilst the union appreciates the difficult economic conditions they may be faced with, these should not be used as an excuse or bargaining chip to award workers lower pay or threaten them with dismissals,” the NUM said.

The double-digit pay demand is likely to set a trend mirrored in other sectors, which could lead to protracted and adverse negotiations in the bargaining councils. Employers are sure to use shrinking profit margins and revenue losses to defend marginal offers and this will, in turn, likely spur further militancy. Last year’s unusually high pay settlements in mining following illegal strike action have now raised the bar and scuppered normal collective bargaining procedures. This means a recurrence of worker militancy could send wage negotiations into a veritable no man’s land, with unions unable to control strike action or settlement.

Still, in order to retain membership, NUM and AMCU will have no choice but to tap into the militancy and keep demands high. Research done by Cosatu ahead of its national congress last year showed significant discontent among workers with union representation during wage negotiations, which organised labour is now desperate to rectify.

Apart from the threatened teachers’ strike, there will be minimum butting of heads with the state as the three-year wage agreement sealed last year means there will be no public sector wage negotiations this year. But while the alliance is spared the stress of another public sector strike, conditions are far from rosy.

ANC and SACP leaders will share the stage with Cosatu officials at Workers Day rallies in the context of severe tensions within the federation and the alliance. Once again, Cosatu general secretary Zwelinzima Vavi will not be at the main Workers Day event, but has chosen to be at a secondary rally in the Free State. Cosatu President S’dumo Dlamini will address the main Workers Day rally in Galeshewe, Kimberley, alongside President Jacob Zuma and SACP general secretary Blade Nzimande.

Vavi has been in the firing line from Zuma loyalists within Cosatu and in the alliance for his critical stance against government, and has thus avoided sharing platforms with Zuma and Nzimande in recent years. Their joint presence at the memorial on the 20th anniversary of Chris Hani’s death recently was clearly uncomfortable, with Nzimande in particular using the platform to retort Vavi’s criticism in his presence.

But even though Dlamini is trying his utmost to keep Cosatu onside with the ANC leadership, he will not be able to camouflage the growing discontent among workers who bear the brunt of the rising cost of living and delivery failures. He will also not be able to get around the federation’s rejection of major aspects of the National Development Plan (NDP), now the centrepiece of ANC policy and planning. Although Vavi is a handy target for the Zuma brigade, unhappiness with the NDP, e-tolling and labour brokers is not just through his instigation and is likely to be sustained even if his detractors within Cosatu manage to dislodge him.

This is why the Cosatu Central Committee meeting scheduled for the end of May, which is set to lay open the battles besetting the federation, is likely to emerge with a rejection of the NDP. This means that despite efforts to paper over the cracks in the alliance, tensions will boil over once the whole of Cosatu has to line up behind the decision and challenge the ANC’s full adoption of the plan. The SACP’s ardent defence of the NDP has expanded the chasm between the party and Cosatu, both of which still purport to be the voice of the working class.

Cosatu is also not letting up on its rejection of e-tolling and labour brokers, all of which keeps pressure building within the alliance. The ANC is unlikely to budge on e-tolling, as government is determined to go ahead with implementation. The ruling party seems to think that the issue of labour brokers should no longer be on the agenda after resolving that there should be greater regulation of the sector.

Therefore, despite keeping up appearances on Workers Day, the ANC, SACP and Cosatu are trapped in loveless relationship, which can only sink further into the abyss over irreconcilable issues. But they continue to be in denial that the alliance is no longer sustainable or functional.

IFP President Mangosuthu Buthelezi told a Freedom Day celebration in KwaZulu-Natal at the weekend that the ANC was “hijacked” by its alliance partners.

Buthelezi said the ANC under former presidents Nelson Mandela and Thabo Mbeki was willing to listen and compromise where necessary.

“But somewhere along the line, the ANC began to be held to ransom by its alliance partners, Cosatu and the South African Communist Party. Not wanting to risk (losing) their support, the ANC started making poor choices and bad policy. It tried to please everyone, instead of doing what was necessary and right,” Buthelezi said, according to Business Day.

He used the go-slow by teachers to demonstrate the point, saying the ANC government was being held to ransom by Sadtu.

The ANC denied the criticism, saying it was “utterly untrue” that the ANC would allow itself to be hijacked by any interest group. However there were examples of policies that had made its alliance partners “feel aggrieved”, ANC spokesman Jackson Mthembu told the paper.

The denial is only true in so far that it is not only the ANC that is hijacked, but that all the alliance partners are held hostage by each other. On Workers Day, like any other day when they have to appear on joint platforms, the ANC, SACP and Cosatu end up in an unwieldy dance to pretend they are in synch.

The fractious unity can only last for so long and sustain only so much pressure before it implodes. This winter might just force matters to a head.

But for now, it’s Happy Workers Day and Amandla! DM