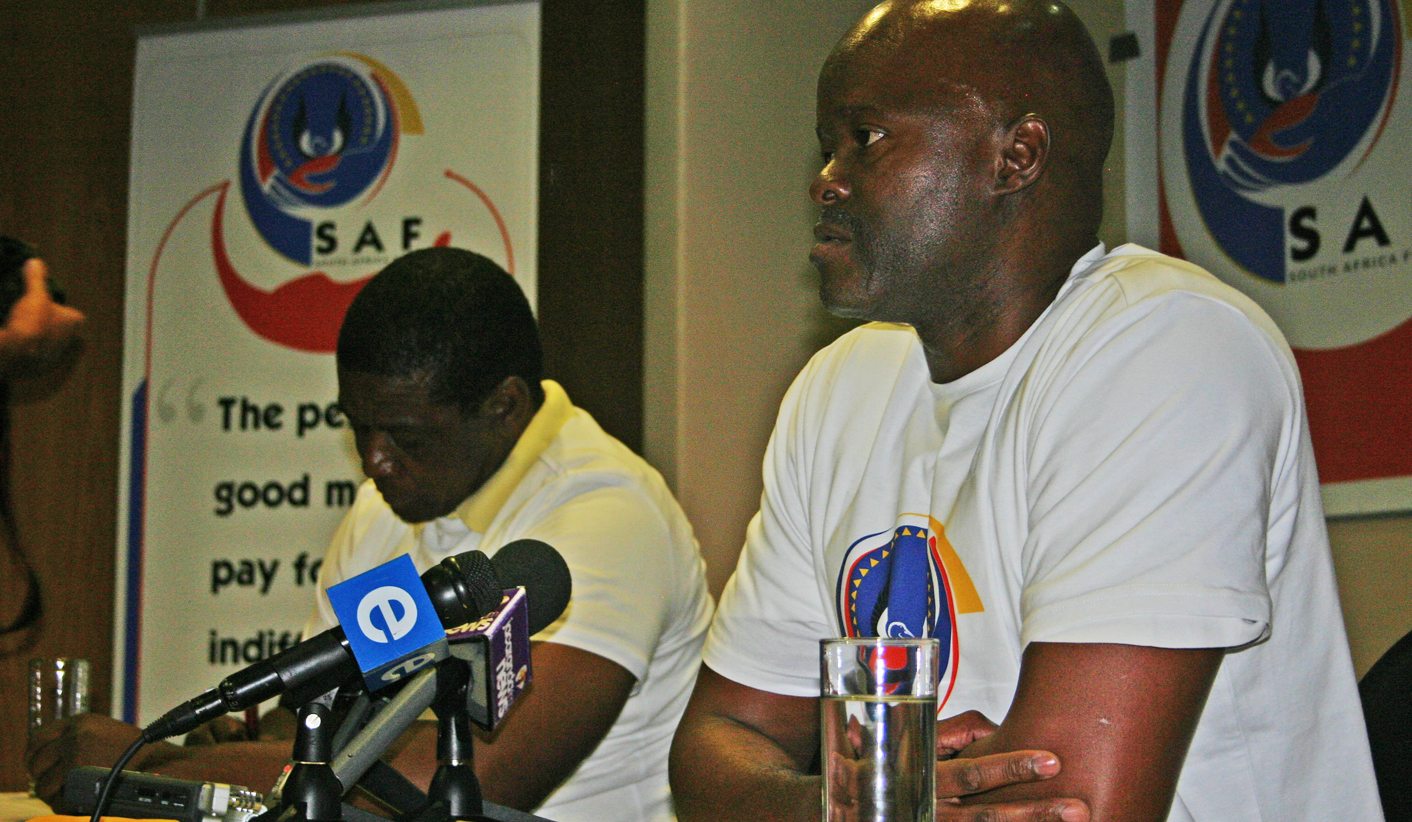 It is noon on Freedom Day, Saturday 27 April 2013, and a media conference is being held at a nondescript hotel somewhere between Johannesburg and Pretoria, where expelled Umkhonto weSizwe (MK) cadre, Eddie Mokhoanatse, announces the launch of a new political party called ‘South Africa First’.

Mokhoanatse’s inaugural speech describes SA First as a broad coalition driven by civic organisations and private citizens who want to transform this country one cause at a time, and one municipality at a time. Rather than being a political party comprised of members, Mokhoanatse explains that this new vehicle will be a “power broker” of coalitions; a mobiliser of civic organisations; and will empower individuals to lead their own communities.

Mokhoanatse positions SA First as a grassroots political entity, saying it will contest the 2014 national elections, although at the time of launch it had yet to register with the Independent Electoral Commission(IEC).

The introductory speech is over and the ousted MK man sits facing a cluster of journalists and a handful of supporters in a smallish conference room, where he is flanked by his fellow former cadre, Lucky Twala. Mokhoanatse was expelled from the MK Military Veterans Association in 2012 after being part of legal action against MKMVA, when a forensic report found that leaders of the association had turned its investment vehicle into their own “personal piggy bank”.

Predictably, the MKMVA tried to rubbish the new party before it launched. The association’s chair, Kebby Maphatsoe (who was implicated in the forensic report and litigation), earlier told the media that Mokhoanatse and his co-founders at SA First were “a disappointment to the nation… outside the MKMVA they are nothing,” said Maphatsoe. “It’s a non-starter because outside Umkhonto we Sizwe [and the ANC] they are nothing, they must ask Julius [Malema]. The ANC made Julius,” Maphatsoe added, calling Mokhoanatse and anyone associated with the party a “sell out”.

As Mokhoanatse faces the media at the launch with Twala, they are confident and show no sign of being perturbed with the MKMVA’s ad hominem attack. Together they want to convince the journalists before them that SA First will swell its ranks with civic organisations from across the country; that the some 12 million who didn’t vote in the last election are a viable target market; and that the some two million people involved in service delivery protests annually are its desired constituents.

But the media aren’t buying the rhetoric which is high on idealism and very low on practicalities of implementation. Aren’t you just another Cope, asks one reporter. Who are the civic organisations that will support you, enquires another. Reuters, in particular, wants names, more so because of what Mokhoanatse told journalists earlier.

“We can’t mention names because the politics of SA is around ‘draw cards’. Is there a member of Cabinet or is there a leading politician involved? Our basic statement is very simple. The problem with this country is that the ruling party has failed to deliver a sustainable solution. Equally the opposition has failed to provide an alternative party. This is the moment for civil society and private citizens to take charge of their future,” the former MK man enthuses. “This party will be driven by leaders who are leaders in their own right in their communities.”

Mokhoanatse then goes on to talk about the market share that SA First can appeal to. In terms of the numbers, Mokhoanatse’s maths goes a little like this: SA had a voting population of 29,9 million in 2009. Of this, some 23 million registered to vote with the IEC. A total of 17,9 million cast their vote that year, meaning that some 5,2 million registered but abstained.

Given that 59,8% of SA’s registered voters cast their ballots, Mokhoanatse and SA First maintain that 12 million or 40,2% either didn’t turn out to vote on the day or didn’t register. But central to the political party’s core – the place that it will draw leadership, loyalty and constituency from – are the service delivery riots, the civic activists at a local level.

You’d be forgiven remembering, at this stage, the September National Imbizo’s Andile Mngxitama, who in 2011 allegedly travelled to Grahamstown to marshal support for the SNI, with the Unemployed People’s Movement. “In 2011 Mngxitama came to Grahamstown. He asked for a meeting with UPM and we agreed. He asked us to support his People’s Manifesto and to join his organisation. He also said that his organisation, the September National Imbizo, must contest elections,” a communique for the UPM reads.

Be that as it may, Mokhoanatse is a considered man, and has none of Mngxitama’s impulsiveness, yet like SNI and to a degree, Agang, there’s the assumption that this country’s disenfranchised will gladly fall in line behind a political pied piper – that every service delivery riot is a constituency looking for a political party to save it. But what is becoming increasingly apparent is that there are a growing number of political parties gunning for a constituency that may not want them. In politics there are no guarantees, particularly amongst an electorate whose trust has been battered.

Here it is important to look at SA First alongside this country’s more recent electoral contenders, namely Agang and the Worker’s and Socialist Party (WASP). Launched in a community hall in Pretoria, at the end of March 2012, WASP was borne out of the 2012 mining strikes and the Marikana Massacre.

WASP comes from the Democratic Social Movement that was very involved in playing an organising role with mine workers in the North West, and because of this the party has strong support from mining workers’ delegates from Marikana near Rustenburg, Klerksdorp Uranium, Kumba Iron Ore in the Northern Cape, Bokoni Platinum, Gold Fields KDC, Harmony Gold, Mpumalanga coal mines, and Anglo Gold Ashanti amongst others.

Conversely, Agang launched with a big name fronting it at Jozi’s Constitution Hill. On February 18 2013, after weeks of speculation, activist, academic, businesswoman and former MD of The World Bank, Mamphela Ramphele, threw her hat into the political ring. But while SA First was sitting in a hotel in Midrand, Ramphele herself was in Soweto launching a petition for electoral reform.

“The people are going to govern in this country in the way that we envisaged,” Agang’s leader told youths present on Freedom Day. “We are going to build a country we can be proud of, a country that respects every one of us.” The thinking behind the petition is to force a legislative change to electoral powers that would see what Ramphele calls “truly democratic rule as envisioned by our Constitution.” The petition wants to ensure every citizen “can vote for a person who will represent their local area in the national and provincial government and every citizen can hold that individual accountable for their actions”.

The petition also wants to see parliamentarians hold monthly community meetings in their provinces; for state officials (and their immediate families) to be banned from doing business with government; and for public servants to post financial disclosure forms online annually. After a mix-up with venues only 100 people turned out to witness the petition’s launch.

Similarly, SA First will also be gunning for local government accountability. “We are sitting here with municipalities that are dysfunctional. At national, provincial and local level there is R26 billion that can’t be accounted for. Reports are generated but nothing is done,” Mokhoanatse said at his party’s launch.

“We want to redirect the anger of our communities related to service delivery from the burning, destroying of property, and causing harm… To collect petitions to force the IEC to consider municipal by-elections,” he said. The idea is that local communities petition the IEC when local governments fail to deliver, and through the Constitution force a remedy where the IEC enables a by-election, in what is untested law. Basically, like Agang, SA first wants reform of SA’s electoral system to a constituency-based arrangement.

Other platforms that SA First says it will use to swell membership is to contest the e-tolls (which to date has largely been ‘owned’ by Cosatu); and a campaign to bring all of SA’s soldiers back home. Although the DA has large gaps when it comes to garnering grassroots support, it has a strong defence portfolio. Any party would be hard pressed to find a shadow minister more on top of defence issues and the deployment of troops, than David Maynier.

At its media launch, SA First was repeatedly pushed for names of civic organisations that it would align with or more details on who was behind the organisation. “We have a lot of supporters amongst the former MK combatants, but we can’t mention names,” said Mokhoanatse. “Yes, you see two people in front of you. The others are in the employ of the state. The minute they show their faces they will lose their employment and income. They are supporting us but when the time is right they will raise their hands and support us. We are very sensitive to them and want to protect them,” said Mokhoanatse, who assured journalists that SA First would be an antidote to government – a truly transparent party for the people.

Goodness knows, South Africa needs leadership to come forward and marshal this country’s people, so that there’s a move toward responsible and accountable government that is service driven.

SA First has some interesting ideas and good intent, but without strong organisational abilities, influence or political reach, it is just another party hunting for electoral support. And it may find marshalling service delivery protesters so as to own their votes, a bit like herding cats. DM