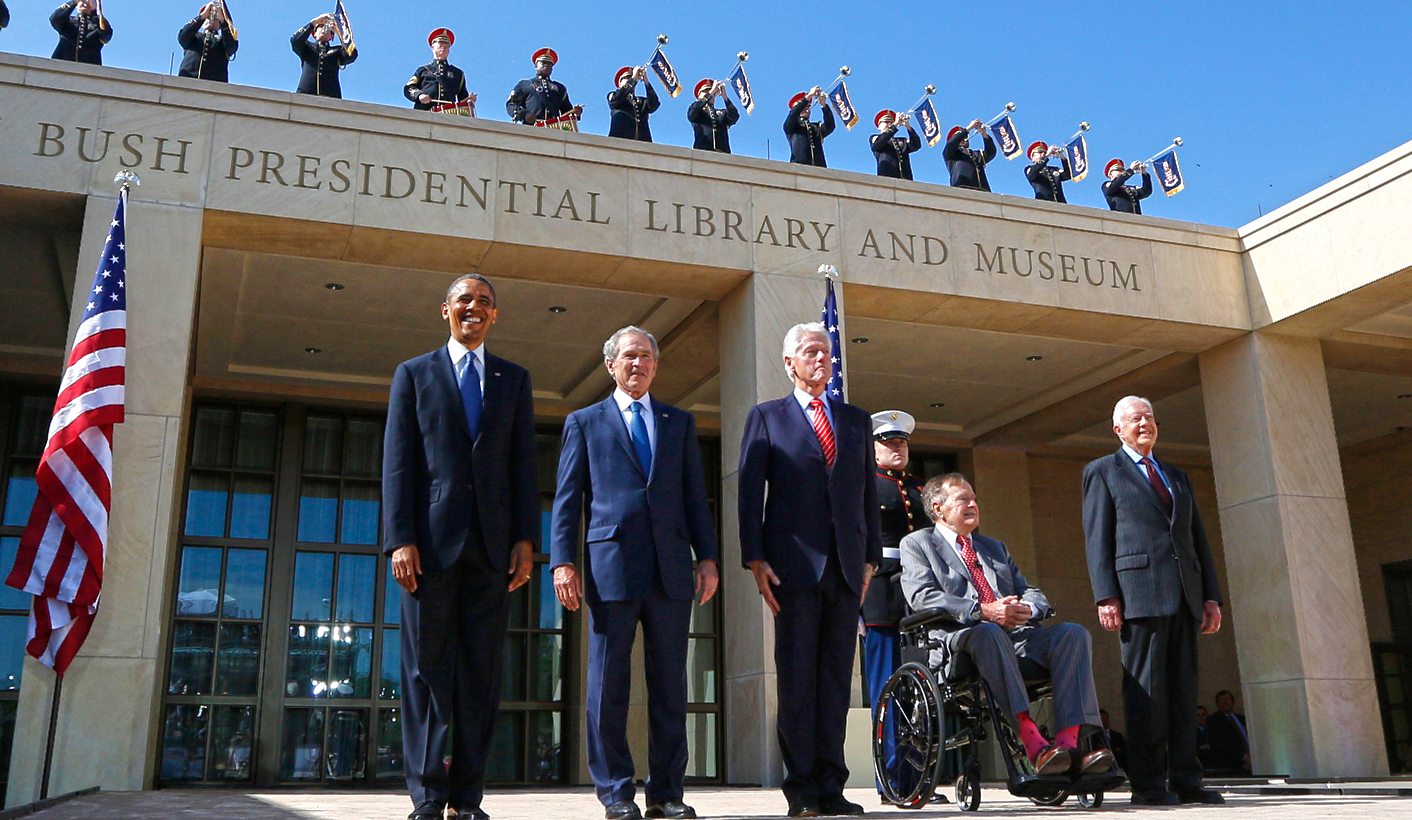 George W. Bush basked in warm praise from President Barack Obama and three fellow former U.S. presidents on Thursday as Bush's library was dedicated in a ceremony that emphasized his resolute response to terrorism while skirting controversies such as his decision to invade Iraq. By Steve Holland.

Obama and fellow Democrats Bill Clinton and Jimmy Carter, along with Bush’s father, former President George H.W. Bush, came together on the campus of Southern Methodist University to honor one of their own. At the end of the hour-long ceremony, Bush – who has largely avoided public life since leaving Washington in January 2009 – choked back tears as he concluded his remarks.

Obama captured the feeling of the day when he indicated that Bush’s political friends and foes both view the former president as genuine.

“To know the man is to like the man, because he’s comfortable in his own skin,” Obama said. “He takes his job seriously, but he doesn’t take himself too seriously. He’s a good man.”

Bush, a Republican, had historically low popularity ratings for a U.S. president – about 33 percent – when he left office.

Although most Americans give him credit him for his steadfast response to the Sept. 11, 2001, attacks, many opposed his decision to go war against Iraq on what turned out to be a false claim that Saddam Hussein’s regime was stockpiling biological and chemical weapons. By the end of Bush’s term, a once-vibrant economy was collapsing, fueling an image of an administration gone awry.

But time away from the spotlight has helped Bush in the eyes of many Americans. In the days leading up to the dedication of his library and museum, a Washington Post-ABC News poll indicated that Bush’s approval rating was 47 percent, about equal to Obama’s.

In his speech to an audience that organizers estimated at 10,000 people, Bush alluded to the difficult choices he faced as president, which is a theme that runs through several of the library’s exhibits.

“One of the things about democracies is people are free to disagree. It’s fair to say I gave people plenty of opportunities to exercise that right,” Bush said with a chuckle.

ELDER BUSH: ‘GLAD TO BE HERE’

The former presidents form what amounts to the world’s most exclusive gathering, known informally as the Presidents Club. Most were rivals at one time or another, but the shared experience of being president has created bonds between them.

The United States has 13 presidential libraries around the country, which preserve documents and records from presidents dating to Herbert Hoover.

During the ceremony in Dallas, the former presidents focused on the positive aspects of Bush’s tenure. Clinton and Carter praised Bush for pushing Congress to fund AIDS relief for Africa.

Clinton is particularly close to Bush’s father, George H.W. Bush, because the two have worked on various relief projects together.

Clinton teased Bush about the not-so-complex paintings that Bush, a novice artist, had produced in recent years, including self-portraits of Bush in the shower and the bathtub.

Clinton, a Democrat, said he considered asking Bush to do a similar painting of him, but then thought better of it.

“Those bathroom sketches are great, but at my age, I think I should keep my suit,” he said to laughter.

George H.W. Bush, 88 and in a wheelchair, had a health scare in December. But on Thursday he joined the other former presidents and their wives onstage, and spoke briefly.

“We’re glad to be here,” he said in a shaky voice. “God bless America.”

Unlike other former presidents, Carter, a Democrat who served from 1977 to 1981, has not been shy about criticizing his predecessors. But he was upbeat when he stood before the crowd of Bush supporters.

Carter recalled that Bush had become president after winning a disputed election in 2000 against Democrat Al Gore. Carter said that two months later, he was among the few Democrats to show up for Bush’s first inauguration.

Carter thanked Bush for helping the needy in Africa with increased foreign assistance and for seeking a solution to the conflict in Sudan. Carter told Bush he was grateful “for the contributions you’ve made to the most needy people on Earth.”

Obama used the occasion to promote his efforts to overhaul the nation’s immigration system, pointing to Bush’s failed 2007 effort as an important contribution. U.S. House Of Representatives Speaker John Boehner, a Republican, was in the audience.

The crowd included a who’s who of dignitaries who served with Bush, such as former British Prime Minister Tony Blair, forever linked with Bush on the decision to launch the Iraq war. Former Italian Prime Minister Silvio Berlusconi also attended.

Also among the guests were family members and personal friends of the Bushes as well as Democrats such as Ron Kirk, a former mayor of Dallas who recently resigned as U.S. trade representative.

“We may disagree passionately about politics, but this is a time to set that aside and celebrate the American presidency and President Bush’s years of service,” Kirk said before the ceremony.

About 100 demonstrators, many wearing white plastic masks and carrying signs, staged a march and rally in Dallas near the campus. Jim Mills, an organizer, said the demonstration was meant to attract the attention of the five attending presidents, who have all supported U.S. involvement in various wars.

“We are opposed to the buildup of the industrial military complex,” said Cynthia Durbin, carrying a sign that read “The Bush Library – A Crime against the Mind.”

Since he left office, Bush, a 66-year-old Texan, has focused mostly on helping to build his library and museum, getting involved in charitable projects as well as painting, playing golf and riding mountain bikes.

The museum exhibits cover major points of Bush’s presidency and offer visitors an opportunity to decide how they would have responded to those challenges.

“It’s tremendous – exactly what I had hoped it would be,” said Dirk Kempthorne, a secretary of the interior under Bush who toured the library on Wednesday. “While it is expansive, it really makes history and the Bush presidency very intimate.”

SMU students, faculty, staff and alumni were invited to a Thursday evening program featuring fireworks and a ceremonial lighting of the library’s entry tower.

A central part of the museum is devoted to the Sept. 11 attacks.

“When our freedom came under attack we made the tough decision required to keep our people safe,” Bush said. He said his library’s presidential center will be devoted to promoting freedom abroad.

“I’m retired from politics – happily so, I might add – but not from public service,” he said.

Bush’s supporters hope the library and the passage of time will lead more Americans to their belief that his performance in the White House was better than they might have thought. DM

Photo: U.S. President Barack Obama (L) stands alongside (L-R) former presidents George W. Bush, Bill Clinton, George H.W. Bush and Jimmy Carter as they attend the dedication ceremony for the George W. Bush Presidential Center in Dallas, April 25, 2013. Obama is in Texas to stand shoulder-to-shoulder with former president George W. Bush in what could serve as a powerful reminder of the ongoing struggle against terrorism, from the Sept. 11 attacks to the Boston Marathon bombings. REUTERS/Jason Reed