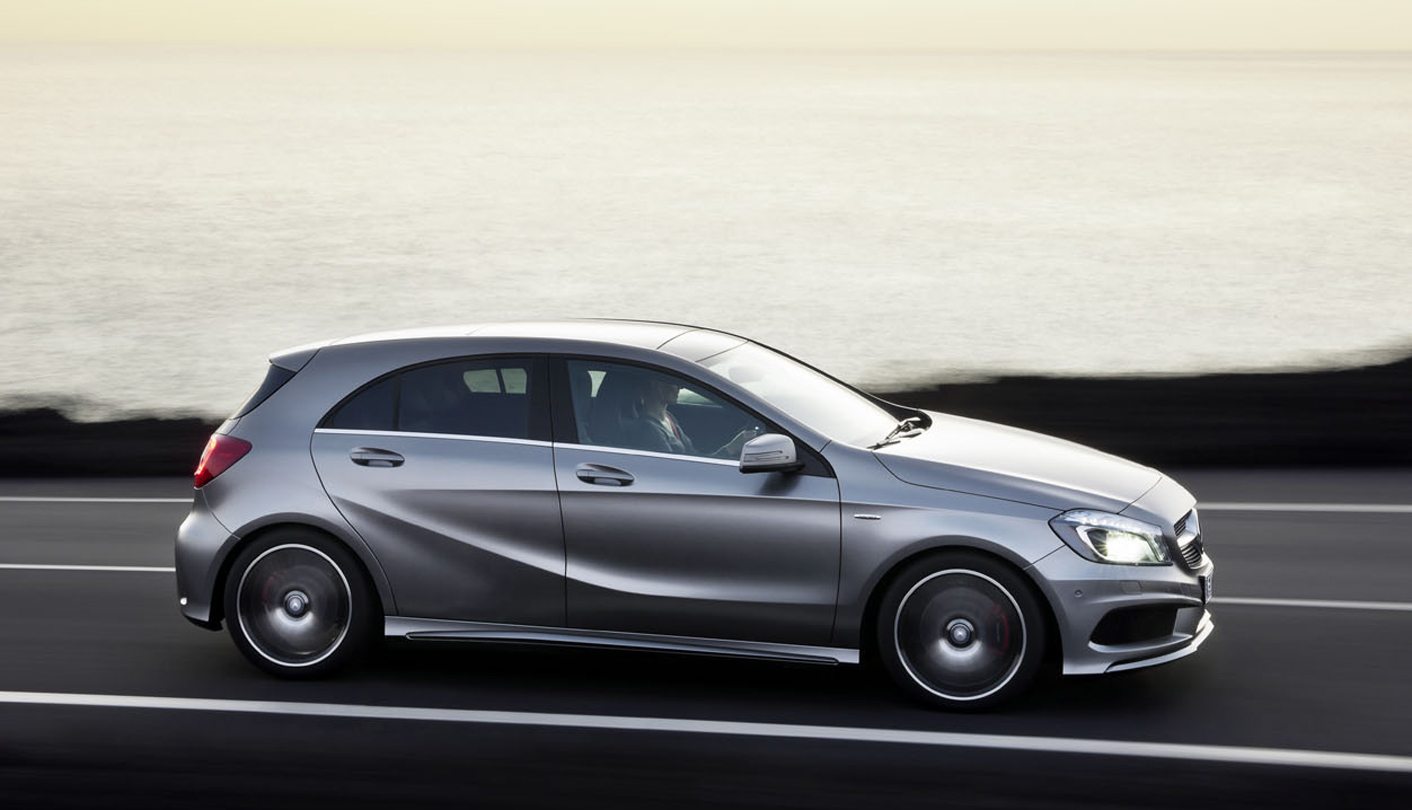 The all-new Mercedes-Benz A-class is not what you’d expect. What used to be a dumpy but technologically daring mini-MPV, much loved by young moms, greying empty nesters and even fastidious grannies, has suddenly evolved into a muscular, sporty premium hatchback. A radical departure from the previous A-class formula, yes. But hardly unusual in the luxury motoring context. By DEON SCHOEMAN.

Let’s face it: Mercedes-Benz is still considered a pretty conservative luxury car brand. It might build exciting and aspirational cars like the SLS AMG, and run its own Formula One team, but that Three-Pointed Star continues to be rooted in old-style automotive heritage and tradition.

For that very reason, the launch of the latest A-class not only marks the arrival of an all-new car, but also epitomises a real effort from Mercedes-Benz to attract a younger, hipper motoring audience.

The new car is a radical departure from its predecessor. But then, the original A-class was radical, too, if for vastly different reasons.

The first A-class was a small, even tiny car at a time when mainstream Mercedes models were generously proportioned luxury machines. It boasted front-wheel drive when Mercs were rear-wheel driven by definition.

And since Mercedes was adamant that even a small Merc should offer the kind of peerless safety the brand was revered for, it engineered a very clever, very advanced sandwich platform for the A-class that would allow the engine to be pushed underneath the floor of the car in the case of a frontal collision, rather than ending up on the driver’s lap.

Fast forward to 2013, and another A-class is born. The newcomer is considered revolutionary, because it’s so different from its predecessor. Gone is the tall, almost ungainly stance, the high roofline, the almost abrupt rear. Instead, the new A is a low-slung, athletically endowed hatchback, with chiselled flanks, big wheels and muscular proportions.

If the old A-class was dumpy, pragmatic and practical, then its successor is dashing, daring and extrovert – certainly not conservative, and definitely not old-fashioned. It oozes testosterone-tinged aspiration.

Does that make it a handsome car? I’m in two minds about the styling.

Yes, it represents a huge aesthetic leap from its ungainly, mom’s taxi predecessor. And yes, it expresses the young, desirable, trendy look that Mercedes-Benz envisaged. But in the metal, the execution is fussy, with too many styling elements vying for attention.

The bold front end, with its prowling nose and aggressive, oversized grille, is pure SL, SLK and even SLS. But in the A-class context, the snout looks too big, too loud. It’s as if its creators wanted to make sure that the car would not be mistaken for anything else.

While the old, dumpy A-class was unique, even trend-setting, the new A finds itself in an already crowded segment. Take away the badge, or view it from the rear, and its identity is not nearly as obvious as one would expect.

The flanks, adorned by a prominent lower style crease and an equally etched upper shoulder line, meet at the rear, where they also serve to emphasise the squat, muscular haunches. Hungry air intakes, extended sills, and a large rear bumper adorned with a contrasting rear apron are further expressions of the newcomer’s sporty styling theme.

The cabin of the A-class articulates exactly the same intentions as the exterior: a younger and more dynamic approach, but one that also manages to retain the expected focus on comfort and luxury.

It’s unexpectedly spacious, with good packaging ensuring ample room for front and adequate accommodation for rear occupants. I say adequate because the low and sloping roofline may makes taller folk feel a little claustrophobic at the rear. And the super-comfy sports seats of the car I drove tend to rob the rear of some legroom.

Even so, the interior is one of the new car’s undisputed highlights – and given that car owners experience their steed from behind the wheel, rather than looking at it, the cabin execution is perhaps the more important aspect.

It’s certainly the finest and most attractive insides to grace a mass-market Mercedes for a long time. It looks and feels upmarket and exciting, with a mix of textures and finishes that contribute to an overriding sense of wellbeing. And the quality is tangible.

As has become the norm, a colour LCD display with a menu-driven interface serves as the primary control centre for most of the car’s key systems, including navigation, telephony, information and entertainment. The only flaw here is the rotary controller’s awkward location on the centre console: it’s positioned just too far back to be convenient or intuitive.

Our test car was the A220 CDI Sport – the top turbodiesel version in a six-model range that offers three turbo petrol and three turbodiesels. As such, equipment levels are comprehensive, although there are some costly add-ons for those who like sophisticated sound, multimedia and satnav options.

The good news is that even the more affordable A-class derivatives do their luxury positioning proud as far as standard features are concerned. It’s still a Mercedes, after all! In fact, pricing is competitive, with entry-level A-class models starting in the mid-R275,000 region, before options.

The A220 CDI turbodiesel flagship is powered by a 1.8-litre four-cylinder, good for 125kW and a fat 350Nm. That’s ample brio, given the capacity, and the low-down urge is provided without any lag-induced hesitation. In fact, much of the max urge and shove is already on song at medium revs, making chasing the rev counter into the red a pointless exercise.

But the really impressive stat is the fuel consumption, which is quoted as between 4.2 and 4.4l/100km – at least, according to the factory figures. But spend a day driving the A220 CDI with enthusiasm, as we did, and that figure is more likely to hover between 7 and 8 l/100km.

For those who prefer petrol power, the A250 is the most muscular petrol unit, with a max output of 155kW and 350Nm. Both six-speed manual and seven-speed dual clutch gearboxes are available, although the top versions are offered with the dual-clutch transmission and shift paddles only.

The gearbox works well, offering snappy cog swaps, but gets clunky and indecisive at slow speeds in first and second gear. It’s probably best to leave it in full auto mode when crawling along, then.

Turbodiesels have certainly come a long way – and the A220 CDI is good case in point. It’s a real little flyer, with loads of low-down torque, and plenty of top-end power. Top speed is 220km/h, while the zero to 100km/h dash is despatched in the low eight-second bracket. Importantly, the A always feels faster and more eager than those stats infer.

The ride is firm, but likely to be too taut for some buyers. Of course, that could be specific to the Sport package model tested here, and the low-profile tyres, but even then, the chassis could be more supple, especially when the road surface is less than perfect – an all too common occurrence in South Africa.

The steering is precise, but it feels overassisted at medium to normal speeds and never really loads up enough when pressing on. Still, the chassis provides plenty of seat-of-the-pants feedback, and there’s plenty of grip.

Still, if you’re prepared to live with the firm ride, the handling is impressive: the stance remains neutral, even under high-speed duress, with little sign of the understeer often associated with front-wheel drive cars.

The A-class remains resolutely planted to the chosen line, and only the fact that briefly coming off the throttle tucks in the nose towards the apex alerts one to the fact that the front wheels are the powered ones here. Of course, the car’s handling competence only comes to the fore when driven with intent – at normal cruising speeds, and around town, the chassis’ talents are overshadowed by the too-taut ride.

The new A-class is being punted as a radical departure from the norm, and it certainly is that – albeit in the Mercedes-Benz context. After all, sporty premium hatchbacks are nothing new, as the likes of BMW’s 1-Series, and the Audi A3, prove. Even the iconic VW GTI could be considered part of that category these days.

Yes, the new A-class represents a big step forward for the brand, and finally allows it to compete in a segment with substantial volume potential. But it is also a late arrival in a highly competitive sector, contested by some very talented and established premium hatchbacks.

Will it succeed? Only time will tell… DM