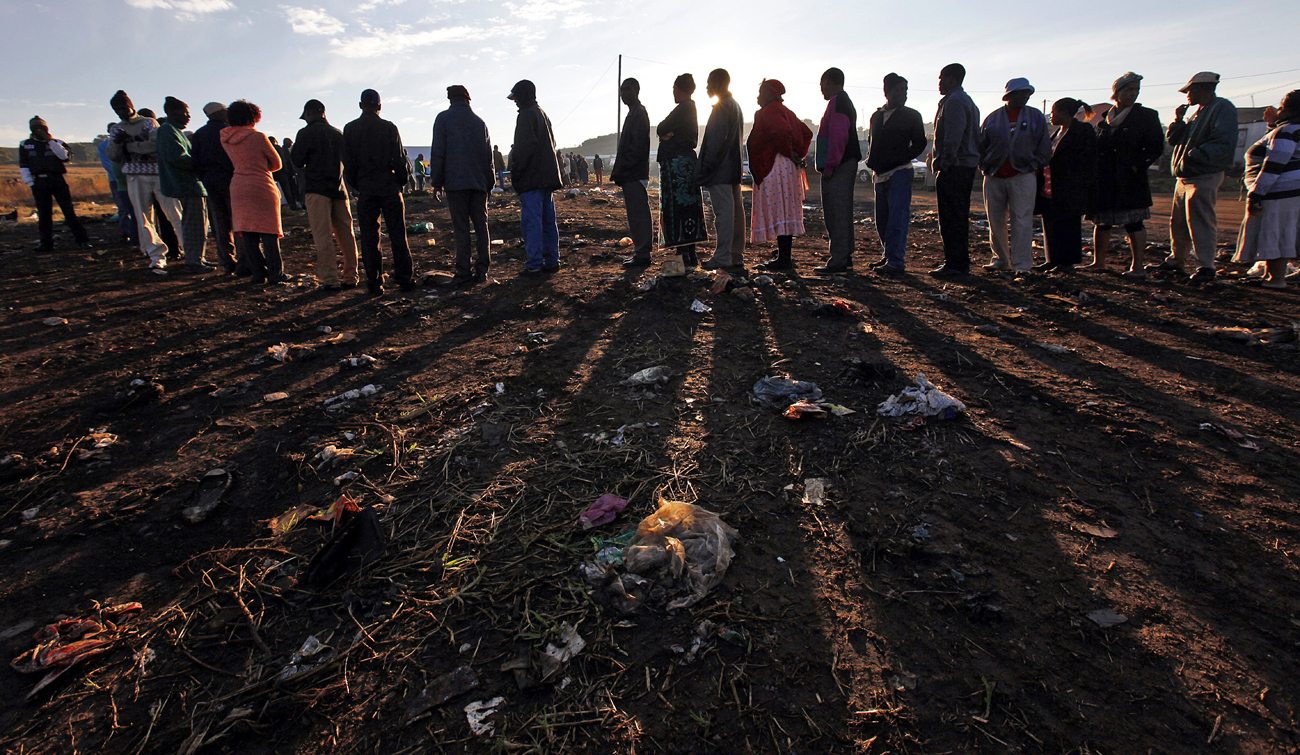 On Wednesday South Africans went to the polls in the biggest by-elections buffet since the 2011 municipal elections, with 17 wards up for grabs. At least eight of these were marginal wards with the potential for a change of power. There was a fair amount of that going on, one or two significant upsets and some eleventh-hour controversy for added spice. All in all, it was a good day at the races – but not for the ANC. By PAUL BERKOWITZ

19 wards were in need of new councillors on Wednesday morning and two of them were retained unopposed by the ANC. The by-elections in the remaining 17 wards still represented the largest number of wards contested on any one by-election date since the 2011 elections. (There was even supposed to be another ward contested, in KwaZulu-Natal, but this was cancelled at the last minute.)

Wards were contested in almost every single province, although almost half the wards were in Limpopo, where irregularities in the original 2011 process triggered a few by-elections. The ANC defended 11 wards, five were defended by the DA and one ward was defended by no-one (the incumbent councillor was an independent candidate who died in office.)

The ANC ended up winning the ward that was vacated by the independent, but lost another four wards (three to independents, one to the PAC) and a strategic municipality in the Northern Cape. The party also failed to win a critical ward in a rural Western Cape municipality from the DA, and consequently missed an opportunity to challenge the DA for control of the municipality.

The ANC successfully defended the other ward, Ward 10 of Metsimaholo (Sasolburg) but saw its share of the vote fall from 89% to 63%. The municipality has been troubled by service delivery protests in recent months and there is a lot of anger directed towards the ANC-led municipal council. It didn’t translate into a real upset for the party, but it’s hardly positive.

The number of votes for the ANC in the by-election was less than half of the party’s 2011 number, and the DA increased its absolute number of votes, but the gap between the two parties was still too big to close.

In Ward 115 in Johannesburg (in the Bryanston area), the DA easily defended the ward it won in 2011. It increased its share of the vote from 87% to 96% in a low-polled election and, although it was hardly necessary, still brought out the party’s Mmusi Maimane to campaign in the lead-up to the election.

One ward was supposed to be contested in KwaZulu-Natal, Ward 22 in Abaqulusi (Vryheid), but the IEC announced on Tuesday that this by-election would not be taking place, at least not at this time. The ANC won the ward with just 54% of the vote in 2011 (IFP 22%, NFP 15%, DA 7%) and there was a very slight chance of an upset here.

No fewer than seven wards were contested in Limpopo, six of which were triggered by irregularities in the original candidate selection process. Four of those six councillors defended their seats on Wednesday once again as ANC candidates.

Up to three of the six ANC seats were marginal, and the party ended up losing two of them. It also lost a slice of the vote in a safe ward to the DA. If the results in these wards are a reaction of voters to this internal ANC process then the message is clear: they don’t like them anymore.

Ward 24 of Greater Tzaneen was won by the ANC with 90% of the vote in 2011, and successfully defended with 86% in the by-election on Wednesday.

Three wards were successfully defended by the ANC in the Makhuduthamaga (Ngwaritsi) municipality, although the actual results varied across the wards. In Ward 25 the ANC won 56% of the vote in 2011 (independent candidate 28%). The party increased this share to an impressive 85% on Wednesday. Similarly, in Ward 28 the ANC increased its share of the vote from 84% to 91%.

In Greater Tubatse two wards were up for by-election. Ward 20 had been won by an independent candidate in 2011 with just 46% of the vote to the ANC’s 42% (COPE 4%, APC 3%). The by-election was triggered by the death of the councillor and the ANC had a much easier campaign on its hands. The party won the ward with 65% of the vote amid a sharply reduced voter turnout.

In Mpumalanga three wards were candidates for by-election, but one (Ward 10 in Nkomazi) was retained by the ANC unopposed. The other two, Wards 17 and 30 in Mbombela (Nelspruit), were successfully defended by the DA. Ward 17 saw the DA increase its share of the vote from 81% to 86%, while the party’s share in Ward 30 rose from 68% to 78%.

Two wards in North-West were contested. Ward 9 in Rustenburg was retained by the ANC, which saw its share of the vote increase from 80% to 90%. Voter turnout, at just 18%, was the lowest on the day.

Ward 14 of Tswaing (Delareyville) was successfully defended by the DA. In the 2011 elections the DA won the ward with 52% of the vote (ANC 44%). The party increased its share to 97% in a poll where only 861 people voted and the ANC declined to field a candidate, pretty much handing the ward to the DA on a platter. It’s not immediately clear why the ANC didn’t participate in the ward.

There was one ward contested in the Northern Cape, Ward 3 in !Kheis (Groblershoop). The story behind this by-election is highly controversial. The incumbent ANC councillor, and mayor of the municipality, Paul Vries, resigned his seat to run as an independent candidate.

The ANC has been campaigning heavily in the ward this week and has brought out a few big guns. But that’s not the controversial part. The big controversy is swirling over accusations that contract workers were registered to vote in the ward and should not have been allowed to.

The workers have had their ballot sheets counted separately. Their votes (which are a couple of dozen) could have been the difference between the ANC retaining or losing the ward and the municipality. It was finally confirmed that Mr Vries had retained his seat, at a few minutes after 2am on Thursday morning. He is likely to retain his mayoral chain and form a coalition with COPE and the DA.

Only slightly less controversial and exciting was the contestation of Ward 7 in Hessequa (Heidelberg/Riversdale). The DA was defending a ward here which, if it had been lost to the ANC, could have seen the party lose the entire municipality.

The DA won seven council seats out of 15 in the 2011 elections, the ANC six, and COPE and the Civic Independent (CI) party won one seat each. The DA and COPE currently run the municipality in coalition – a coalition which would have fallen short of a majority if the ward had been lost. In that event the DA would have had to successfully woo the CI in order to continue a majority coalition.

The DA did retain the seat, but with a smaller share of the vote: 54%, down from 64% in 2011. If this ward’s results are a reflection of rural voter sentiment in the province (as opposed to, for example, the size of the DA’s and ANC’s campaigns) then the DA should be worried about shoring up its support in this area.

Overall, the ANC had a poor showing. The party did increase its share of the vote in a few wards where it already had an overwhelming majority, but that is the end of the good news. It lost four wards, including one that was a complete bolt from the blue. Its share of the vote was reduced sharply in another ward.

The DA saw an overall improvement in its fortunes, apart from its reduced share of the vote in the Hessequa ward. It didn’t win any wards but it strengthened its position almost everywhere that it was incumbent, and established a respectable foothold in a Limpopo ward that was previously a lockdown for the ANC.

This newspaper has said previously that, post-Mangaung, the ANC would have more energy and resources to devote to local government politicking. The party started the year well and appeared to have shaken off its rust. After Wednesday’s performance one has to ask the question: what exactly has been distracting the ANC over the past month? DM

(Note: The author owes a debt of gratitude to Wayne Sussman for his insights and extraordinary knowledge of local politics. All mistakes, etc, remain mine. You can follow Wayne on Twitter at @waynesussman)