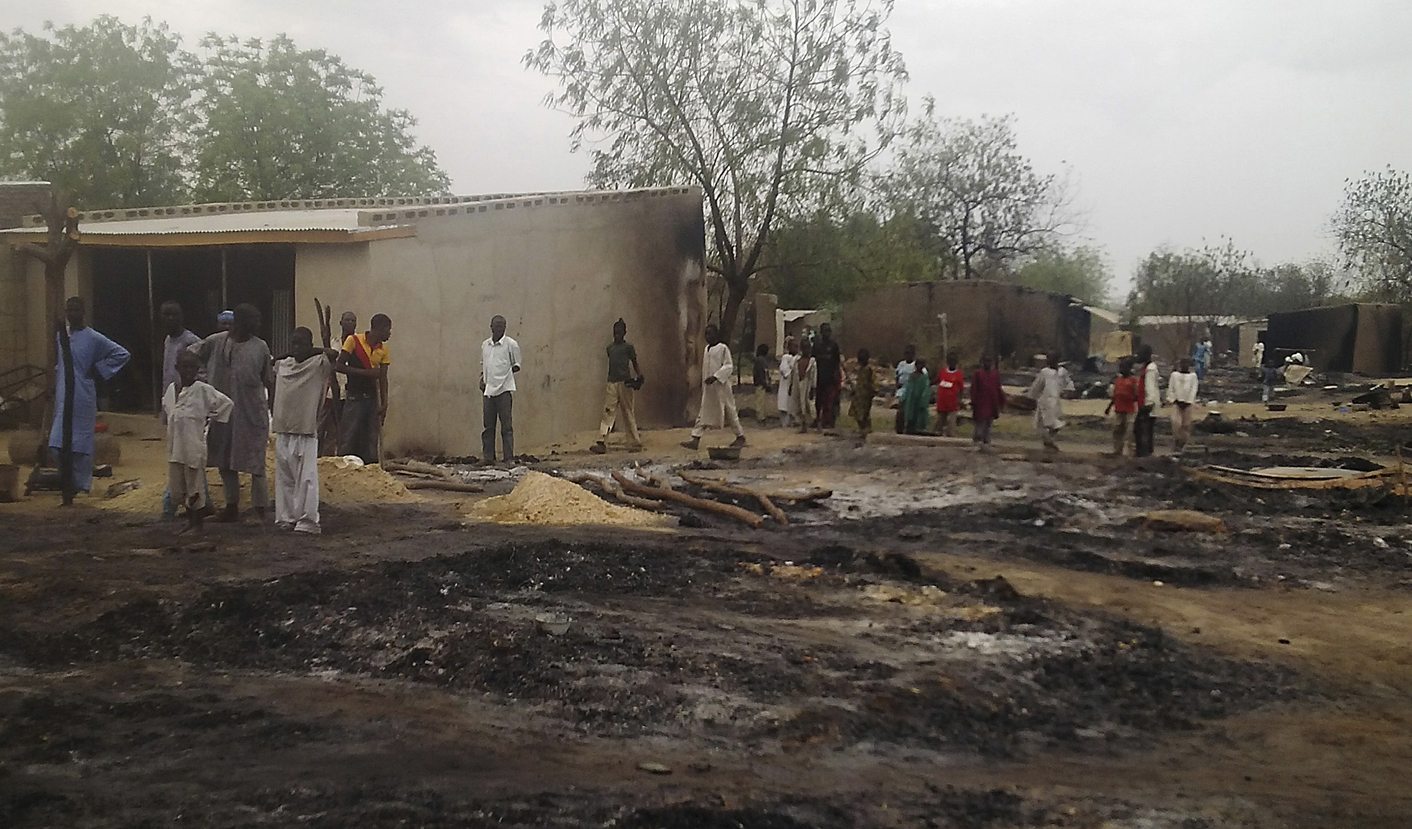 Just days after Nigeria seriously proposed extending a general amnesty to Boko Haram militants, the conflict exploded. At least 185 people, many of them civilians, were killed as a gun battle raged through a suburban area, proving once again that neither the militants nor the Nigerian authorities really care about anyone else. By SIMON ALLISON.

Some commentators, myself included, have spent much of the last week trying to put the Boston bombings into some kind of perspective. This weekend, Nigeria provided us with the latest example of horrific, meaningless loss of life on a far greater scale. The scene was Baga, a fishing community in Nigeria’s north-west, and villagers were still trying to count the victims.

“So far, we have buried 185 corpses. Some were burnt beyond recognition; others are hospitalised, with various degrees of burn,” said one villager, speaking to Sahara Reporters.

“To get food to eat in the town now is a problem because even the markets are burnt. We are still picking corpses of women and children in the bush and creeks,” said another to Associated Press.

Here’s what we think happened. In a planned raid on Friday, Nigerian security forces reportedly surrounded a mosque in Baga where they thought militants belonging to Boko Haram – the Islamist group fighting to impose and Islamic state in Nigeria – were holed up. But the militants were expecting them, it seems, and launched a devastating counter-attack with heavy machine guns and rocket-propelled grenades. This, incidentally, is some serious weaponry, lending credence to reports that Boko Haram has been the grateful recipient of arms funnelled to it from Libya via Mali.

Never ones to shy away from a fight, the Nigerian security forces opened up – with both barrels, and seemingly regardless of who was in the way. Something sparked a blaze – either those RPGs or Nigerian soldiers deliberately lighting fires to smoke out the militants – that destroyed some 2,000 homes. Of the 185 people we think were killed, either by the fire or the fighting, it is unclear how many were militants, soldiers or civilians.

In conveying this information, I’m deliberately using words like “reportedly” and “seemingly” because information about the incident is scarce. In fact, if it wasn’t for the single Associated Press report late on Sunday night – two days later – it’s unlikely we would know about it at all. By Monday, none of the major Nigerian newspapers (I checked Vanguard, ThisDay, Leadership and Punch) carried a single mention of the horrific death toll in Baga on their websites. So circumspection is key – and if Boston has taught us anything, from a media perspective, it’s that even a proliferation of journalists does not guarantee accuracy.

The timing of the Baga incident is interesting. Nigeria has been struggling to deal with the Boko Haram threat for four years now, with the death toll from the conflict sitting at over 1,000 people (excluding Baga). Undoubtedly, Boko Haram is a nasty bunch – its tactics have incorporated kidnappings, suicide bombings, gun attacks and the occasional bank robbery. Indeed, at times the distinction between radical theological idealist and common criminal has been hard to discern.

But in their harsh response, Nigerian authorities have arguably only made the situation worse. Failing to realise that popular support for groups like Boko Haram comes from deep-rooted poverty and perceptions of discrimination and helplessness, the government has responded with force: lots of it, and lots of it indiscriminate. In its analysis, Human Rights Watch noted that both sides in this conflict may have committed crimes against humanity. There are no good guys here.

Nigeria’s heavy-handed tactics continued until recently, when the repeated failure of military means to solve the Boko Haram problem (which is at its core political) became too obvious to ignore. So President Goodluck Jonathan tried something different, tasking a committee to look into the prospect of offering an amnesty to Boko Haram fighters.

This is not without precedent. Amnesties may offend our sense of justice – if you do the crime, you should do the time – but they have proven effective in ending certain long-running conflicts. A case in point is in Nigeria’s very own Niger Delta, where a general amnesty to fighters aligned with the Movement for the Emancipation of the Niger Delta (Mend) took the sting out of the insurgency. Some fighters took advantage of compensation and retraining, and Mend – though still a potent force – was left a shadow of its former self.

But it’s still a controversial move. Key opposition politicians have opposed the idea of an amnesty, and the government has made a few more enemies by going about it all wrong. For instance, on the recommendation of his exploratory committee, Jonathan appointed another committee to figure how to implement the amnesty. Only problem? He announced its members publicly before informing the committee members themselves. Some prominent northern leaders (the region where Boko Haram is strongest) and civil society leaders have now distanced themselves from the amnesty proposal, and criticised the government’s handling of the situation.

Then came Baga, and incident almost certain to inflame tensions rather than prepare the way for the gradual re-introduction of Boko Haram into society. Not that Boko Haram is looking for that – its leader, Ibrahim Shekau, was very quick to dismiss the amnesty option.

Dangerous militants, overly-aggressive security forces and a bumbling government – it’s not a recipe to solve anything, let alone a deep-seated domestic conflict that touches on religious, ethnic and geographical divides. So where does this leave Nigeria? In trouble, and without any clear plans to get out of it. DM

Photo: Residents gather at the border town of Baga, after heaving fighting between security forces and Islamist militants, April 21, 2013. Fighting erupted on Thursday in Baga, a fishing town on the shores of Lake Chad, adjacent to the Chadian border, spokesmen for the Borno state government that administers the area and its military said. A delegation from the state government visited the town on Sunday in the aftermath of the fighting, and a community representative put the death toll at 185, although there was no confirmation from Nigerian authorities of the death toll. Picture taken April 21, 2013. REUTERS/Stringe