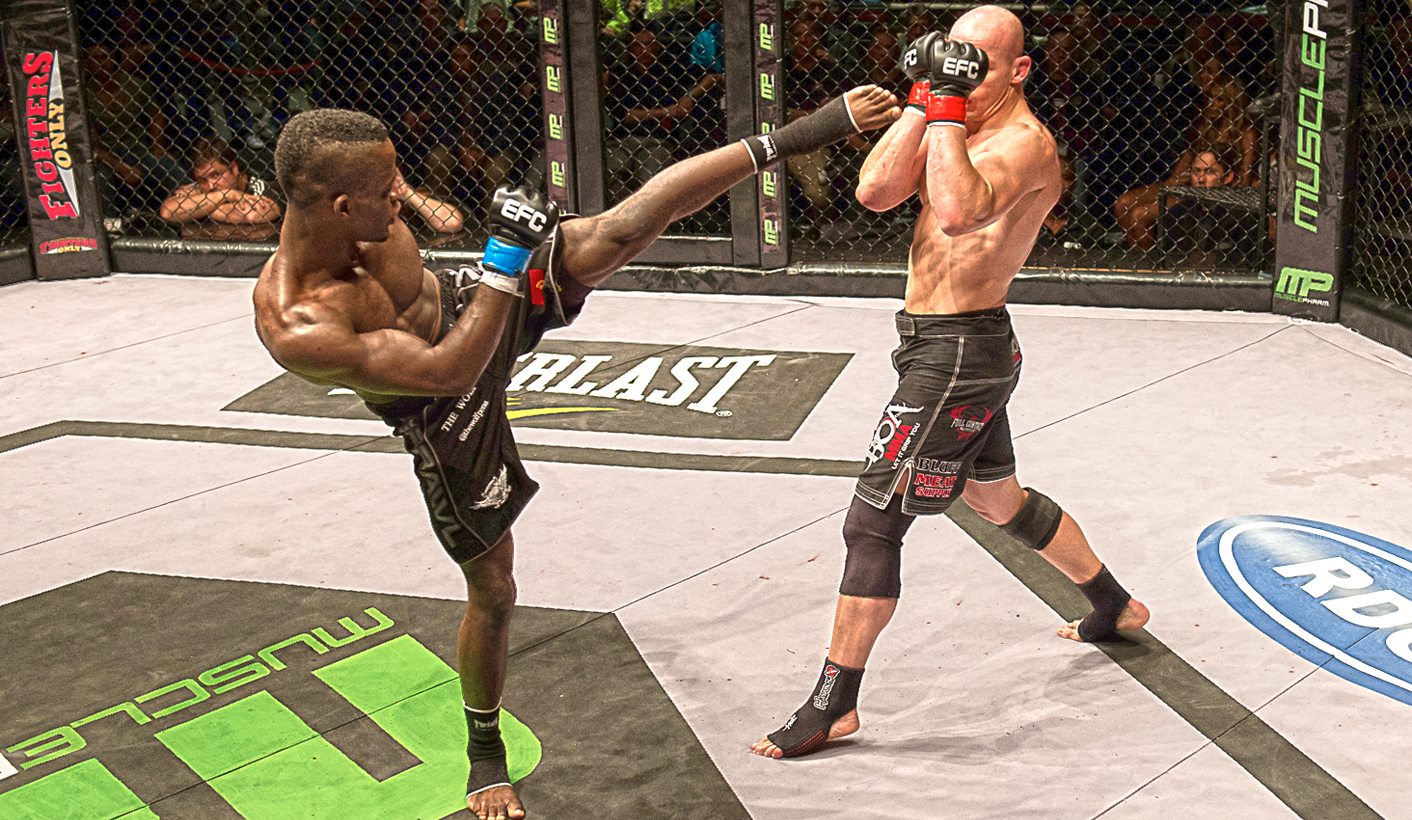 After a bruising start to the professional mixed martial arts title championships fought at Carnival City this past weekend, Demarte ‘The Wolf’ Pena kept his featherweight Extreme Fighting Championship Africa title, in what is fast becoming one of the continent’s most watched sports. MANDY DE WAAL was there to watch every kick, strike and grapple.

But the win didn’t look sure from the onset and round one saw the undefeated Pena sprint away from Wentzel in the Hexagon, because Nel, the man they call ‘The Animal’, attacked the Angolan from the get-go. This could be because 37-year-old Nel was fighting off an old shoulder injury, and the earlier ‘The Animal’ closed the fight, the less chance there would be of him being weakened by this vulnerability.

MMA used to be a no-holds barred style used in car parks and on the streets, but today the genre is extremely competitive, well regulated and has produced its first dollar billionaire in the form of Las Vegas entrepreneur Lorenzo Fertitta, who literally rescued the sport from obscurity.

The sport’s one-time tainted image was largely thanks to Ultimate Fighting Championship’s (UFC – the US version of EFC Africa) blood sport beginnings. The very first full-contact, UFC combat bouts were fought in an octagonal cage, broadcast on pay-per-view and promoted with the boast: “There are no rules.” Combatants would wage war until “knockout, submission, doctor’s intervention, or death,” the promoters declared.

In the UFC first cage encounter, a French kickboxing champ from Holland faced off against a 180-plus-kg sumo wrestler from Hawaii. The LA Times said what came next was a massacre. Twenty-six seconds into the first round, the kick-boxer punctuated the fight with a savage kick to the already grounded sumo wrestler’s face. Blood started to pour. The sumo wrestler lost three teeth – two had lodged in the kick-boxer’s foot and the other flew out of the cage and landed on the fight announcer’s table.

Fertitta (together with his brother) saw the potential in UFC, bought the professional championship promotion business from its founders in 2001, and reinvented the sport just as it was about to be banned in the US. UFC learnt to cooperate with state athletic commissions to become more acceptable, and more mainstream. The brothers made the sport benign by banning biting, eye gouging and blows to the trachea, so while MMA looks fiercer than any other fighting competition, it is actually safer than boxing or rugby.

The cash cow of UFC’s massive growth is television – in particular a reality face-off programme called The Ultimate Fighter that pits ‘rising brawlers’ against each other. The success came in 2007 when the Fertittas’ casino business started falter because of the global recession, and the brothers were facing close on $4.8 billion in debt.

A few years later and Forbes has it that Lorenzo Fertitta is worth over $1 billion. Bloomberg reported that UFC raked in $500 million in sales in 2012 off 442 fighters from 38 countries who are contracted to the sports promotion giant. UFC hosted 14 pay-per-view events in 2012 which brought in the bulk of that revenue.

Back in South Africa, when asked what he’s doing with his billions earned from MMA, the president (and co-founder) of EFC Africa, Cairo Howarth, laughs broadly. “South Africa doesn’t have pay-per-view television, so we don’t have that business model. We have had to look at what they do overseas and take their successes, but adapt it to the local market. We don’t have the luxury of pay-per-view. If we did, we would have made millions much quicker.”

MMA had no traction locally so Howarth has had to build it from the ground up from the first series bout in 2009. “We had to show the broadcasters that we could pull this off – that we could give them good television content and that the television content was something that their viewers wanted to watch,” Howarth said. The audience grew from canned events shown a while after the title bouts to live broadcasts on eTV. “This has been phenomenal for us – we have been pulling in the ratings. Over 1,5 million people tune in to watch us, which is about 25% of eTV’s audience share,” Howarth said. The only other sport that gets close to that rating on eTV is (you guessed it) soccer.

The live TV broadcasts made the sport more mainstream locally, and enabled the Howarth to build a viable, growing business model based on advertiser sponsorships and television contracts. EFC Africa sponsors include TapOut, the biggest MMA clothing brand in the world. MusclePharm is EFC Africa’s headline sponsor and the MMA promoters have a deal with Mr Price Sport for a clothing and equipment range.

Other revenue streams come from betting partner Betxchange; and Nu Metro cinemas which broadcast fights live. “Currently we make money from ticket sales, sponsorship, broadcasting and merchandising. But the biggest growth is in broadcasting.” EFC Africa currently broadcasts to 107 different countries around the world.

Photo: Ten time EFC Africa winner, Wentzel Nel has Demarte Pena up against the edge of the cage in a tense but evenly matched title bout. (Photo courtesy of EFC Africa)

Millions of people on the continent and around the world watched the series nine title fight, during which the first couple of rounds revealed an onslaught from Nel, who has ten wins and three loses under his belt, with Pena alternatively trying to land kicks or defend himself from his opponent’s punishing blows. At one stage Nel struck just below Pena’s right eye, while at other times the two were down on the floor of the hexagon grappling, as a tense crowd chanted for their favourite.

But in the final rounds it was evident that the 23-year-old, five-time undefeated champion was much stronger at grappling than Nel and had more stamina. In the last round Pena repeatedly pinned Nel to the floor and rained down heavy blows on the former title holder who hoped for another shot at glory. At one point as Pena trapped Nel on the floor, ‘The Wolf’ looked at the clock to see whether the five rounds of five minutes each were coming to an end.

Photo: After being declared Extreme Fighting Championship Africa’s featherweight title holder for the sixth time, MMA warrior Demarte ‘The Wolf’ Pena, steps into the middle of the hexagon and howls. (Photo courtesy of EFC Africa)

Pena is a tactician, a man who has military strategy coded into his genes. ‘The Wolf’s’ father is Arlindo ‘Ben Ben’ Pena, who was a general in the Angolan rebel movement UNITA (National Union for the Total Independence of Angola). Pena’s grandfather is credited as being one of Africa’s greatest military strategists of the 20th century, Jonas Malheiro Savimbi. The founder of UNITA, Savimbi was shot dead in 2002, while Pena Snr was poisoned during the Angolan civil war, and died in 1998 in a Johannesburg hospital.

It was consistency, fitness and an unrelenting will that saw Pena dominate the fight. By round four Wentzel was bleeding from his mouth and appeared tired. When the horn signalled the end of the fifth and final round, it didn’t take long for the judges to make their verdict known. Penal won the fight, the belt, and retained his title – he was EFC Africa 19’s featherweight champion by the judge’s unanimous decision.

Declared the victor, ‘The Wolf’ stepped right into the middle of the hexagon, bared the fangs painted on his mouthguard and howled into the night. The EFC Africa featherweight title and championship belt, for now, belonged to him. DM