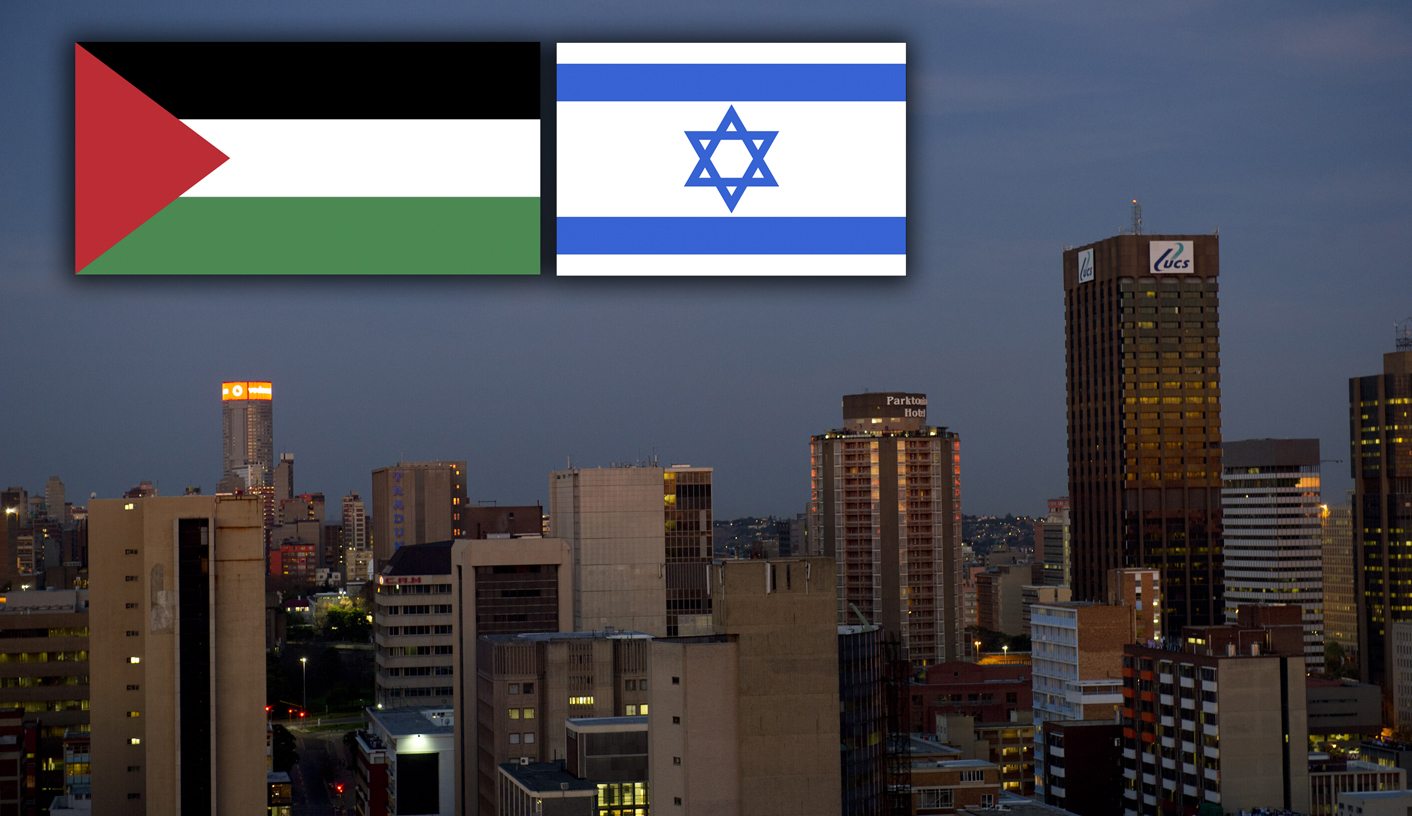 Monday, 15 April was Israeli Independence Day, commemorating the Israeli Declaration of Independence in 1948. A concert held at Joburg’s Gold Reef City to mark the occasion turned ugly, however, when members of the pro-Palestine Boycott, Divestment, Sanctions campaign (BDS) staged a protest at the event and clashed with private security forces. In the wake of the incident, neither side is giving any ground – proof, if any more were needed, that this issue won’t subside quietly any time soon. By REBECCA DAVIS.

Certain facts about Monday’s events are not contested by either faction, although many others are. The SA Jewish Board of Deputies (SAJBD) and the SA Zionist Federation were among the parties responsible for organising a celebration of Israeli Independence Day at the Lyric Theatre, at Gold Reef City. The BDS campaign, together with representatives from the South African Communist Party, the South African Students Congress (Sasco) and others, had permission to stage a lawful demonstration outside the theatre. The conditions under which they were allowed to demonstrate stated that 80 protestors could attend, but around 250 people participated in the end – a point acknowledged by the BDS campaign.

Most protesters confined their activities to a picket outside the venue, including holding signs condemning Israel and blowing vuvuzelas. Police were present, and no incidents were reported. A number of activists, however, had bought tickets to the concert in order to carry out protest action inside the venue. According to the BDS campaign’s Muhammed Desai, two of the activists were denied access to the show, but about eight managed to gain entrance.

Although members of the police were controlling events outside, inside the Lyric Theatre security was handled by the Community Security Organisation (CSO), which was hired by the organisers. The reason for this, according to the SAJBD’s Zev Krengel, was that “the Jewish community have previously been victims of terror attacks”. There have also been a number of other events disrupted by BDS activists: most recently, on 12 March, a performance at Wits given by Israeli pianist Yossi Reshef.

Desai says that about half an hour into the concert, activists let off “stink bombs” and stood up to reveal T-shirts which bore the slogan “Israeli Apartheid Stinks”. The stink bombs are small glass vials of chemicals, which release a sulphurous odour when crushed beneath one’s heel. Activists say they do not produce any noise beyond that of glass breaking – which they say would have been inaudible over the volume of the concert’s music – and neither do they release any form of gas.

BDS says the activists were immediately set upon by CSO members and dragged out of the venue. Thereafter, it claims, a male student was trapped in a passage and beaten up; two women were thrown down an escalator; and another woman, while being escorted out, was punched in the face by an elderly female member of the audience who then collapsed. The SAJBD claims, by contrast, that it was an activist who attacked the elderly woman.

The concert proceeded to continue, but there were a few activists remaining undercover in the audience. Towards the end of the show, two of these – young white women – crushed stink bombs under their feet, got on stage and took off their jackets to again reveal the same sloganned T-shirts. These women, it is alleged, were put in neck locks by security and dragged downstairs to an open parking lot, where their hands were tied with cable-ties. There, it’s claimed, their heads were repeatedly pushed against the ground while CSO members demanded to know their names, addresses and ID numbers. After Gold Reef City security allegedly intervened, the two were taken to a local police station, where they were released shortly afterwards.

In conversation with the Daily Maverick, the SAJBD’s Krengel did not dispute that the actions of the CSO members had taken place, though he said he was not an “expert witness” as he had not seen the two women being removed from the stage. “I wasn’t there for the actual incident [of the women being cable-tied]. I came at the end of it,” Krengel said. He also said that he subsequently went to the police station where the young women had been taken in order to make sure that they were okay.

Krengel defended the use of the CSO on the ground of previous incidents in Johannesburg and the wider history of attacks targeting the Jewish community. “Don’t forget that that night was the same night when a bomb went off in the Boston Marathon,” he said. He also pointed to the fact that the protesters had gained access to a private event under false pretences and then proceeded to disrupt it. “If you try to go to a restaurant anywhere and let off a stink bomb, private security is going to take you out,” he said. “You have to have law and order.”

One of the two activists whose hands were tied spoke to the Daily Maverick on condition of anonymity, because she said she was scared of reprisals. Rose*, 26, said that she and another female activist almost did not go ahead with their protest action. “We were at a point where we were going to pull out, because we could sense the emotion in the room was quite powerful,” she said. “It was a spur of the moment decision. I crushed my stink bomb on the floor, nervously stumbled on stage, cracked another stink bomb beneath my heel, turned around, opened my jacket, put my hands in the air and said ‘Free Palestine’.”

She was immediately “grabbed” by the singer on stage, Yaniv D’Or, in an incident described thusly on the “Elder of Ziyon” blog: “At this point Yaniv who had very bravely carried on his performance hoping that they would leave, made the heroic decision to pick up the protestor and removed her off the stage while continuing to sing. He handed her over to security forces that were waiting by the stage.”

Rose, who says she weighs 51kg, rejects the idea that she “attempted to attack the performers”, as alleged in a statement put out by the SAJBD and the SA Zionist Federation. “I didn’t have time to do anything. I just threw my hands up,” she said. “When they were holding me backstage, I urinated on myself. That’s how scared I was.”

The BDS’s Desai vehemently rejects the idea that the protest was an attack on the Jewish community. “It was a celebration of Israeli Independence Day, which we feel is a celebration of the murder of indigenous Palestinian people,” he said. He says the BDS would never consider disrupting any Jewish religious event.

For its part, however, the SAJBD sees the choice of Israeli Independence Day as the date for a protest as a sign that the BSD wants to see the “complete destruction of the Jewish state,” to quote Krengel. “Israel Independence Day is a date given through the UN,” he said. “It has nothing to do with the West Bank, or the so-called Occupation. If you want to protest Israel’s activities in the West Bank, then we can have that discussion. But why would you try to stop our right to celebrate a great UN resolution?”

In conversation with the Daily Maverick, Desai compared the actions of the BDS activists to those of anti-Apartheid activists who would take measures internationally to try ensure that South Africa’s sporting fixtures would not go ahead. “Did I want to see the destruction of Apartheid South Africa?” he said. “If implementing equal rights meant an end to the Apartheid state in South Africa, and the creation of a democratic country for all – including white South Africa together with the Bantustans – then, yes, so be it.”

For his part, Krengel says “the comparison is outrageous. Israel was given by the UN. Apartheid South Africa was not created by the UN. I absolutely believe in a two-state solution. But we will not stop celebrating Israeli Independence Day. We will not allow our private functions to be disrupted by thugs. They were trying to intimidate our community. They were just there to cause trouble.”

The BDS activists insist that celebrating Israeli Independence Day is inappropriate. “You cannot be celebrating Apartheid anywhere in the world,” said Rose. “We are also in solidarity with the people who continue to struggle with the scaffolding of Apartheid in this country as well. We are tired of just talking about it.” DM

Photo of Johannesburg by Greg Marinovich.