From outrage to abuse: The impossible taming of the Sus...

From outrage to abuse: The impossible taming of the Sushi King 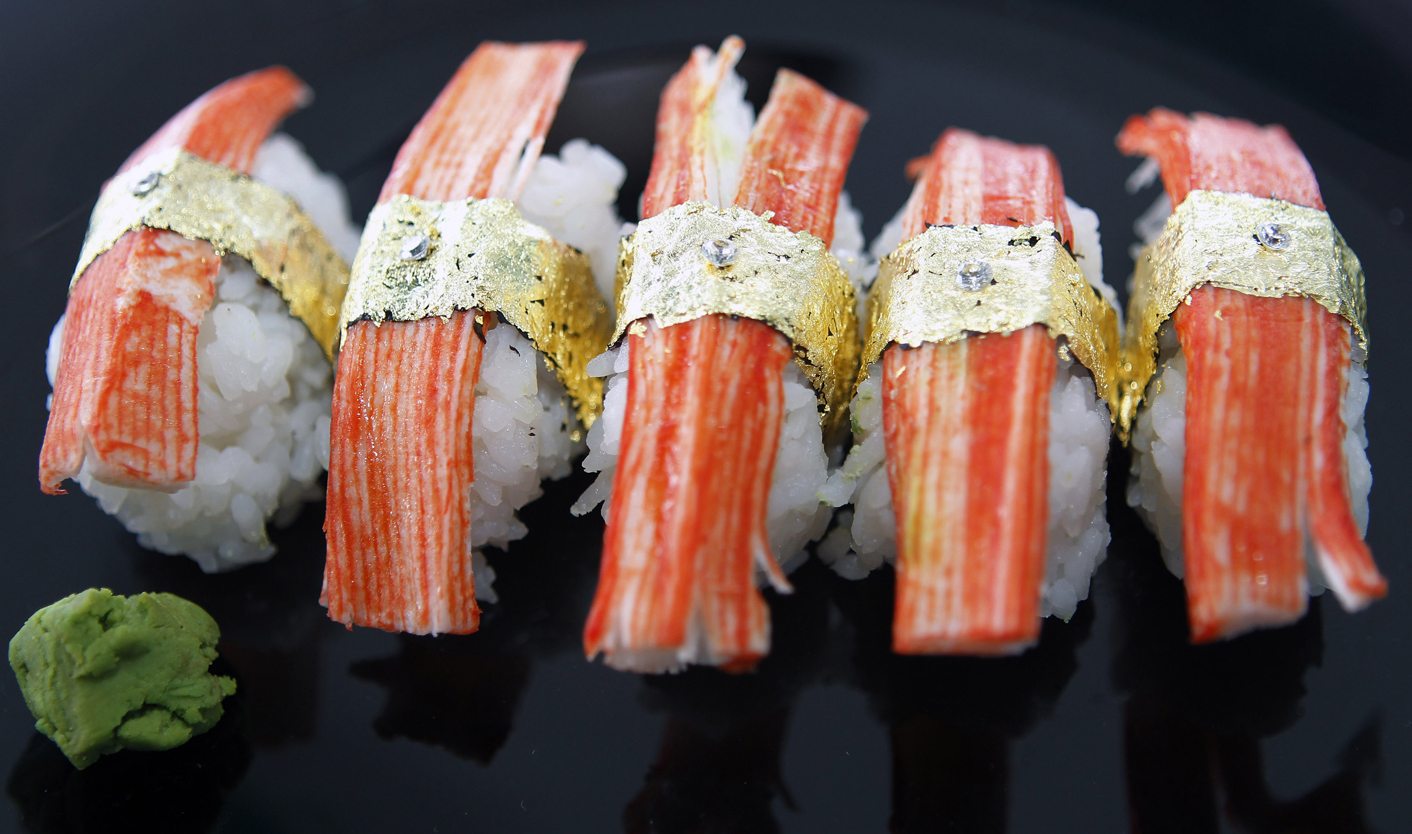 Kenny Kunene, the former prisoner-cum-nightclub-owner who enjoys eating the odd California roll off the body of a model, isn’t famous for his sober values and moderate views. He has been seen as the proof of society’s moral decline and painted as the archetype of male attitudes in SA towards women. With Kunene back in the news, GREG NICOLSON takes a look at the man and the abusive tweets he sent Mmusi Maimane.

Democratic Alliance spokesperson Mmusi Maimane didn’t really slam Kenny Kunene in his Sunday World column and he didn’t say anything that hasn’t been said before. Kunene, thinks the DA’s poster boy, should use his influence to promote “constructive values – the values of hard work, personal responsibility, respect and compassion for others”; he should be more like Patrice Motsepe.

Instead, Kunene is a part of a culture “of glorifying opulence and conspicuous consumption in popular culture”, said Maimane and these values create a society where money trumps dignity and sugar daddies destroy lives by paying schoolgirls for sex. “Kunene’s no role model,” was the gist of it.

Friends and fans contacted the Sushi King about Maimane’s piece on Sunday but he only read the “uninformed, stupid article” on Monday morning. “I felt that he was irritating me, like a cockroach irritates me in the kitchen,” he told Daily Maverick over the phone on Monday. He was incensed the DA member used his name while discussing social issues but didn’t reach out to debate on a public platform.

“If you try to hit me hard, I’ll hit you harder,” said Kunene, angry at the suggestion he formed the izikhothane movement. “He tapped into my private life, so I tapped into his.”

Kunene read the article and wrote a tweet: “m.maimane I’m no role model 4glorified garden boy, who made u a judge. u fucken political cockroach. focus on fucking ur wife b4 we do it 4u…” wrote @zarsushiking. The abhorrent language makes the reference to Maimane’s wife clearly look like a threat.

On the phone, Kunene argued that the tweet was aimed at Maimane’s sanctimonious attitude and that instead of hypocritically judging others, Maimane should focus on pleasing his wife, who he mentions in the Sunday World article. He said he meant that if Maimane cannot satisfy his wife, she would cheat on him.

“That didn’t imply gang rape,” said Kunene, who accused Maimane of perpetuating a stigma that all prisoners or ex-cons are rapists. “I’ve got absolutely no reason to rape,” he said, citing a list of girlfriends. On Twitter he continued: “I get gang raped by women… I’m not a rapist… I’m a victim of rape n I love it…” He later said the comment was light-hearted and not meant to belittle victims of rape or encourage rape. “My heart goes out to rape victims.”

Maimane was with his wife when he saw the tweet. She felt threatened. He said he knew what “b4 we do it 4u” meant. “I grew up in Soweto; I know what the threat of ‘we’ looks like – jackrolling, etc.,” Maimane said on Monday night. Jackrolling is the violent practice of abduction and gang rape that became popular in the townships. The threat was “vulgar”, he said, but the DA spokesman won’t lay charges. He believes in free speech and doesn’t want to create a distraction from the issues behind his article by fueling a Kenny vs. Mmusi fire.

“It does in essence prove the very point I was trying to make. I felt he made it for me, very profoundly so…” Maimane said he didn’t challenge Kunene individually about society’s values and the culture of violence against women. “I wanted him to say he’s willing to defend his values, but for him to then kind of ignore the broader societal questions about women, about society, and to insist on a gang rape…” Maimane trailed off over the phone.

Kunene’s case wasn’t helped by reports over the weekend from entertainment website Wonted that during a radio interview he admitted he may have committed statutory rape when he was a teacher by sleeping with students under the age of 16. Speaking to Daily Maverick, he said he was in his early 20s and had consensual sex with students but the report misrepresented Metro FM’s interview.

Kunene said none of the girls were under 16. The interviewer, Majota “Phat Joe” Khambule said the issue would be clarified on air this Saturday morning. “People have choices,” said Kunene when questioned on the ethics of sleeping with students. “As long as what you are doing is legal there is no problem,” he said, adding that the possibility of favouritism means regulations against teacher and student relationships are necessary.

“I’m probably the most loved guy and the most hated guy in the country,” said Kunene. He continually defends his lifestyle against “hypocrites” who look down on him while behind doors they cheat on their partners and live opulent lifestyles. “Lots of guys pretend and then cheat… We live in a society that promotes hypocrisy,” he says when questioned about his young girlfriends.

“Who doesn’t respect women between the guy that is cheating on his wife and me?” he asks. Kunene claims he is honest with his girlfriends and they decide whether they want to be with him or not. He was married until early 2012 but continued to see other girls. He felt “imprisoned”, he says. “For you to be free you must be honest.”

His lifestyle is almost a clichéd controversy over values and is making headlines again as Kunene’s reality TV show returns for a second season soon. In City Press on Sunday author Pumla Gqola took issue with an article the publication ran the week before that took a positive angle on the Sushi King’s Hugh Hefner-style “sexy Sandton harem”.

“Rich and powerful men repeatedly use beautiful, younger women’s bodies to say something about their own importance,” wrote Gqola. “It may be helpful for some readers to think about Kunene as an exploitative rich man who vampirically feeds off these young women who do not know better. Are these young women simply adornments, a ‘collection’ that allows him to signal to society, and to other men, that he is still here, wealthy, sexy and powerful?”

Kunene dismisses the author as failing to understand the reality of the world. He sees only two options in regards to relationships: pretend to be monogamous and cheat or be honest and have multiple partners. “With what I’ve seen with my eyes, with what I see in strip clubs, with what I saw growing up… it’s just too difficult for me to believe that any man can have one relationship. If it happens, I wish to be him.”

But with over 90,000 followers on Twitter, his own reality TV show, and constant attention in the media, what sort of influence does he have on his fans?

“I believe that the absence of hope is the biggest problem we have in the township,” he says, claiming not to care about material possessions. He argues that the poor don’t talk about poverty but about being successful – the houses, cars, clothes, and girls they want one day. “I give them hope… and that’s what they see in me. I wouldn’t be like this if I didn’t know there are people out there who are inspired by my success,” he says.

But is his idea of success healthy? Do his fans learn to value material objects and superficial ideas of beauty as the height of aspiration or do they learn the benefits of education and hard work in achieving their goals? In between all the bling, the girls, cars, clubs and clothes, and vulgar remarks on Twitter, do they learn about values like honesty and happiness, which Kunene says, he holds dear?

Kunene believes he has a positive influence on his fans and no critic is going to change his mind. “The last time I really gave a fuck was before I was born,” he said.

It brings us back to Maimane’s article.

“I think it is excellent for the country and for the youth to see an individual such as Kenny Kunene succeeding. We must celebrate success, especially by self-made individuals like Kenny. But those individuals who succeed and enter into the public limelight have a responsibility to project constructive values to the country, and especially to the country’s youth,” wrote Maimane. DM

Photo: Sushi garnished with .20-carat African diamonds and wrapped with 24-karat gold leaves are displayed for photographers outside a restaurant in Manila June 28, 2010. The five pieces of sushi, worth 91,800 pesos ($1,996), was created by chef Angelito Araneta Jr., who said his unusual food artworks are used as gifts in marriage proposals or during courtship. REUTERS/Romeo Ranoco