The lost and revised history of the DA, coming soon to a soapbox near you 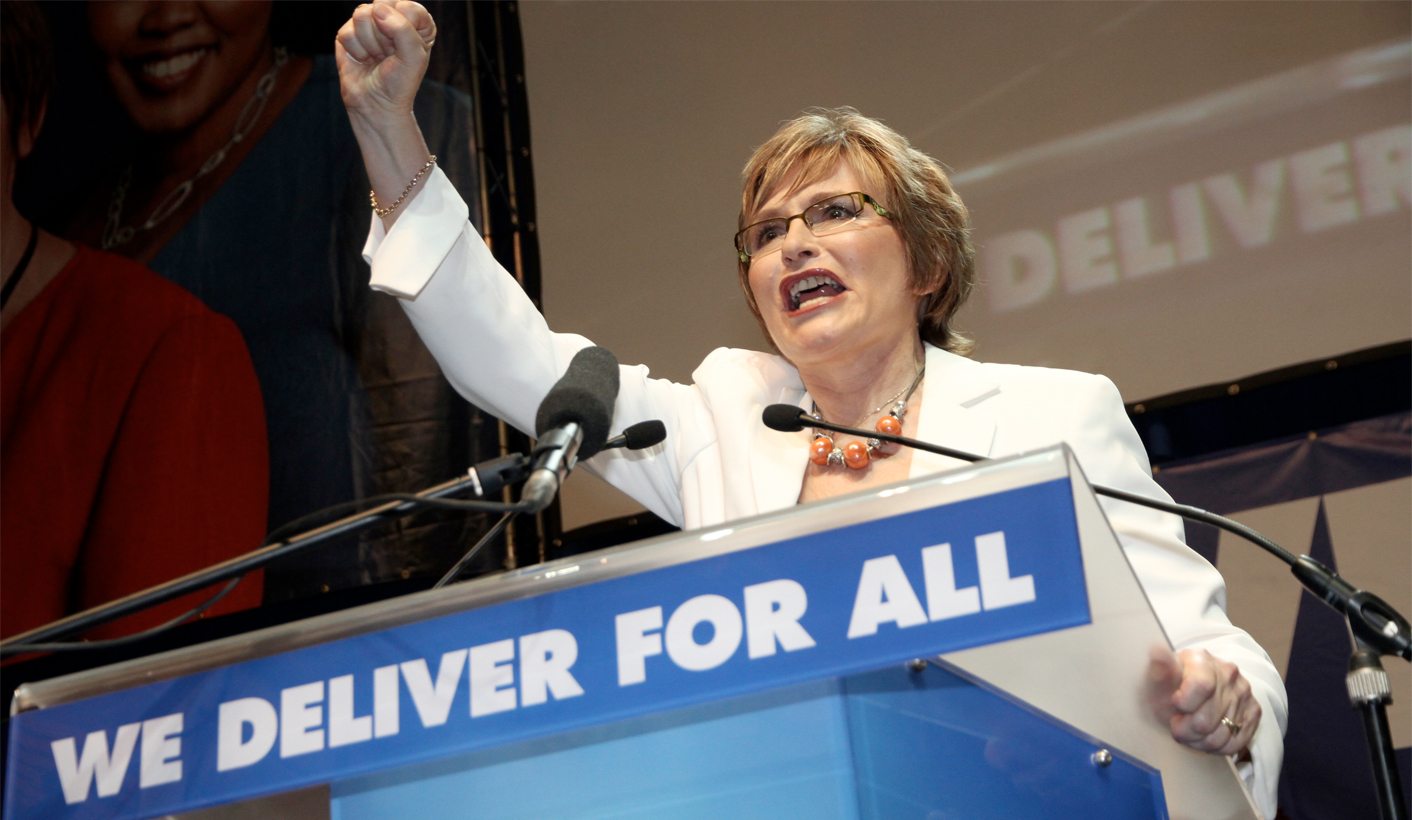 For the next three months, the Democratic Alliance will be on a campaign to tell its “untold story”. Despite attempts to sex it up, there is no hidden link between South Africa’s official opposition and the Inca Empire, Steve Jobs or Muammar Gaddafi. It appears to be merely a pre-election refresher course on who the DA’s leaders are and a bid to dispel perceptions that they were Apartheid enforcers. It also appears to be an endeavour to rustle up some struggle credentials and airbrush its history. By RANJENI MUNUSAMY.

At the launch of the “Our DA Campaign” in the Alexandra township in Gauteng on Saturday, Democratic Alliance leader Helen Zille said her party “was and remains part of South Africa’s struggle for freedom”.

“We are here to tell the untold story of the DA, a story that many South Africans have never heard. It is a story about who we are, where we come from and where we are going. We want every South African to know this story.

“Like any political party, there are many strands to our history. But in recent years, the DA’s strongest strand, the golden thread around which the party’s tapestry has been woven for more than half a century, has somehow become obscured, even invisible,” Zille said.

She went on to say that the DA has allowed “our political opponents to define us”.

“When I travel around South Africa, it truly shocks me to hear that many people think the DA would bring back Apartheid if we won an election. There are a significant number of people who think the DA was responsible for Apartheid, and that Helen Suzman was a member of the ANC. I ask myself how we allowed these false perceptions to take root,” Zille said.

Geordin Hill-Lewis, chief of staff in Zille’s office, says the party’s efforts to reach out to “new communities” were being hampered by false perceptions about the DA’s history. This included that the DA was the party that enforced Apartheid or did not oppose it.

“The other amazing misperception was that Helen Suzman was an ANC activist. This reveals the general ignorance about this history of the DA,” Hill-Lewis said. “All this shows us that ANC’s propaganda war against us in townships has worked.”

The DA’s strategy with the “Our DA Campaign” is therefore to put out information about the DA’s roots and contributions of its leaders to fighting Apartheid in order to appeal to constituencies outside its traditional support bases.

Hill-Lewis said the party’s research showed that people would be more receptive to the DA’s policies and vision if they trusted the party’s bona fides.

So far so good. The problem arises with what the DA has to work with.

Zille’s speech, predictably, leaned heavily on the legacy of Suzman, the most heroic figure associated with the party. For 13 years from 1961, Suzman served as the only opponent to the National Party regime in the white-only parliament. Suzman was then a member of the Progressive Party, the earliest incarnation of the DA. By the time it became Zille’s Blue House, it had undergone various name changes and mergers, including the Progressive Reform Party and the Progressive Federal Party, which was at one time led by another towering figure, Frederik van Zyl Slabbert.

After a merger with two other parties in 1989, the Democratic Party (DP) was born, then led by Zach de Beer. It was the DP which contested the first democratic elections in South Africa, winning just 1.7% of the vote and 10 seats in parliament. De Beer was succeeded by Tony Leon, who was responsible for growing the party to 9.6% of the vote in 1999. The DP replaced the New National Party (which bizarrely thought adding the word “new” to its name would help it to shed its Apartheid baggage) as the official opposition in Parliament.

Perhaps the part of its history likely to feature less prominently in the Our DA campaign will be the DP’s merger with the New National Party (NNP) to form Democratic Alliance in 2000. This was an expedient move to win control of the City of Cape Town. But a year later, in an incredible twist of fate, the NNP left the DA and joined the ANC, allowing history to record a self-abasing end to the party which created and upheld Apartheid for 46 years.

Leon retired as DA leader in 2006, and Zille was elected to succeed him. Before doing so, he took the DA’s representation in Parliament up to 12.4% (50 seats) in the 2004 election. Despite a smooth handover of the reins, there has been a significant cooling of relations between the two, and Leon is hardly ever acknowledged or quoted by the DA’s current crop of leaders. Perhaps this was because he was among a group for former DA parliamentarians appointed by the ANC government as ambassadors after their retirement.

At the launch of his book, The Accidental Ambassador, in Johannesburg last week, nobody in the current DA hierarchy was present.

Rather than acknowledge Leon, or any of her other predecessors such as Van Zyl Slabbert or De Beer, Zille went straight from Suzman to Patricia de Lille, the current mayor of Cape Town. Zille brought De Lille and her Independent Democrats on board in 2010 and therefore proudly praised her background in the labour movement and the Pan Africanist Congress (PAC). Retired federal chairman Joe Seremane, also a former PAC leader, was also useful to bring up as he served time on Robben Island – a struggle credential rare in the DA.

Current federal chairman Wilmot James’s role in the United Democratic Front (UDF) was also worthwhile mentioning. The DA’s recent recruit from the Congress of the People, Nosimo Balindlela was also a UDF activist and a former ANC premier in the Eastern Cape. She does not have much else going for her, but with the DA scrounging for struggle credentials in its ranks, any role in opposition to Apartheid helps.

It is also not coincidental that all the people Zille mentioned are black – which is useful to shedding the DA’s image as a white party with a sprinkling of black token leaders.

So while the official line might be that the DA simply wants to set the record straight and clear misperceptions about its history, the subliminal objective is to highlight whatever anti-Apartheid credentials exist in the leadership ranks. However, Zille told the Alexandra gathering on Saturday that the intention of the campaign was not to “out-struggle” anyone else but to put her party’s own proud history out there – an airbrushed history, that is, with currently inconvenient parts simply forgotten.

The question, though, is whether the South African voter in 2014 will still care about struggle credentials anyway, or will be more concerned about the current track record of the contesting political parties. And while a significant portion the ANC’s support is vested in its struggle history, these voters will probably not turn to the DA because it has a sprinkling of people in its ranks who were anti-Apartheid activists. They would only do so if the DA holds the promise of governing better.

The DA simply cannot compete with the ANC on the basis of history. The ANC is a 101-year-old organisation with a procession of heroic leaders who led a gallant fight against Apartheid, many of them with their lives. While the fact that the DA’s predecessors were outspoken against Apartheid and did not collaborate with the National Party regime might earn some trust, South Africans are much more concerned with the way their lives are being governed now.

If it hopes to achieve its target of winning 30% of the vote next year, the DA needs to keep showing how it can do better than the ANC in the future, not try to compete with its past. With a litany of problems bearing down on the ANC and its image in tatters, many South Africans and traditional ANC voters will be receptive to what other parties are saying.

The DA now needs to figure out what exactly it needs to tell the voters in 2014, not the easiest of tasks. Perhaps presenting itself as a party that owns a future would be a good start. DM