The ANC wants YOU… to help/win the Western Cape 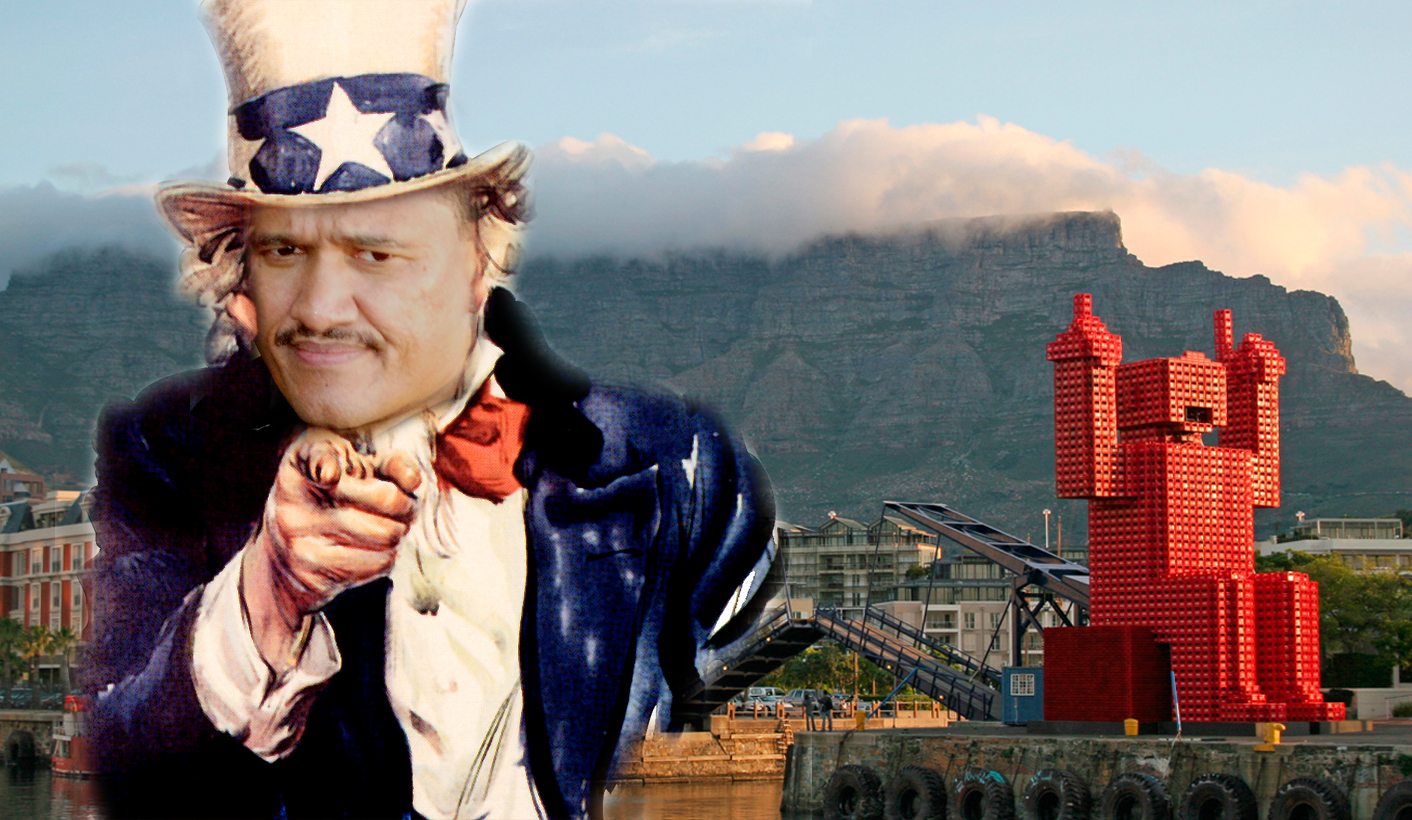 The ANC’s bid to capture the hearts and minds of the Western Cape is off with a bang. On the 20th anniversary of Chris Hani’s death, the ANC’s Western Cape leader Marius Fransman unveiled the ‘Chris Hani 5,000 Volunteer Detachment’, an attempt to get thousands of Cape residents to volunteer their time for community initiatives – but also to help the ANC take the province in the 2014 elections. Doubters said it would never work, but Fransman claims they already have 6,000 volunteers signed up. By REBECCA DAVIS.

When the ANC in the Western Cape announced its intention in January to recruit 5,000 volunteers, the party expressed its intentions for these volunteers in purely political terms. Marius Fransman was quoted as saying those 5,000 volunteers should be knocking on every door in the “fight against the DA”. Nomfesane Nyathela, the provincial ANC Youth League convenor, reportedly appealed to the youth to ensure that Premier Helen Zille has “sleepless nights”. Khaya Magaxa, provincial chairman of the South African Communist Party, stepped up the rhetoric a notch at the same event – according to The Times – by stating: “We want to kill the DA, not violently, but [by] mobilising people”.

It appears that in the almost three months since Fransman announced the volunteer project, however, ANC strategists have re-modelled the packaging of the volunteers’ roles somewhat. Gone are the brusque political threats. In their place, there’s a soothing appeal to community values and altruism: helping out for the greater good. A statement sent out beforehand announcing Wednesday’s media launch defined the purpose of the volunteer campaign as attempting to rekindle a “spirit of selfless sacrifice, revolutionary discipline and volunteerism”.

Taking that at face value, there were doubts whether the Western Cape ANC would be able to gather together 5,000 of these do-gooders. Daily Maverick’s Ryland Fisher expressed some skepticism earlier this week. Though noting his hope that Fransman’s volunteer drive would succeed, Fisher wrote: “Sadly, in my very humble opinion, it is an attempt that is doomed to fail.” How, he questioned, could the ANC expect people to work for free amidst so much poverty and unemployment?

On Tuesday, Fransman had a response to what he called the “doomsayers”. In January, Fransman said, they called for 5,000 volunteers. “Tonight, we have 6,000!” he announced to a cheering auditorium in Athlone.

Addressing journalists before the event, Fransman said they decided early on that the volunteer campaign should not be defined as solely an ANC project. “People might want to volunteer in the spirit of non-racialism, non-sexism,” he explained. They put out a call for what is officially known as the Chris Hani 5,000 Volunteer Detachment, initially via word of mouth, and increasingly by means of social media. “People started to submit CVs, profiles, questions,” Fransman says. Their numbers gradually built. Today, he says, their database spans all ages, races and classes.

Fransman knows there will be cynics who accuse the ANC of fudging these numbers. “So we thought: how do we bring credibility?” The answer they hit on was a “software engineer”, whose database has captured the full details of all those who have signed up. (The Daily Maverick contacted Fransman’s spokesman Cobus Grobler to request a breakdown of the data with regards to the profiles of volunteers, but had not received a response at time of writing.)

But Fransman had many diverse examples to hand. He cited one volunteer, originally from Bonteheuwel, who was a PhD student in Antwerp. Another volunteer is a taxi ‘gatjie’ (the person responsible for collecting fares and touting for passengers). Yet another, Fransman claimed, is “the bergie who sits outside the Taj Hotel”.

Fransman had brought along some big guns to support the campaign: notably, Deputy Minister of Public Works Jeremy Cronin, and Health Minister Aaron Motsoaledi. The latter was only stopping in en route to travel elsewhere, and clearly was intended to lend credibility to proceedings purely by means of his respected presence. Cronin played his part by taking on the role of history professor, explicitly yoking the legacy of Chris Hani to the volunteer campaign: “Everything this campaign stands for is everything Chris Hani taught us he stood for,” he told the crowd.

Cronin also used his platform to weigh into Manuelgate: Trevor Manuel’s widely-reported statement last week that the government could no longer blame Apartheid for its problems. Manuel’s meaning, Cronin asserted, got “twisted and turned by an ambush”. What Manuel also said, which was less reported, was that we need a strong and effective government to reverse Apartheid’s effects, Cronin said, and the effects of centuries of colonial dispossession and ethnic cleansing also. In addition to Verwoerd, Cronin suggested the list of blame be extended to include “Milner, Rhodes, Oppenheimer, Barnato…”

“But it’s not about just blaming them,” Cronin said. “It’s about saying they’ve caused huge problems which haven’t gone away, and it’s about analysing those, not blaming, to take South Africa forward.”

But Cronin’s tangent in this regard was little more than a sideshow. Fransman didn’t want to talk about Trevor Manuel, or Apartheid. Indeed, he barely uttered the word ‘ANC’, so intent was he on capturing the Ubuntu ethos of the volunteering project, suddenly shorn of its political motivations. “These are not politicians,” he said, gesturing at the crowd who had turned out to drink the volunteering KoolAid*.“They are people who want to help with their patriotic responsibilities.”

Some journalists, at least, seemed unsure what was going on. “So…is this the ANC’s election campaign?” one asked Fransman. No, no, insisted Fransman. “We are not governing this province, but there is no reason why the ANC can’t add value in spheres like the young people, SMEs [small and medium enterprises], writing, building consciousness,” he said. “This is not about the election. This is beyond 2014.”

But, er, what exactly is it? Later, Fransman identified particular individuals in the crowd and explained a bit about what their contribution would be. There was a Mitchell’s Plain woman whose son had committed suicide, who was organising a support group for mothers affected by the same problem. One man was running a substance abuse programme. Another woman was arranging for 2,000 pairs of school trousers and shirts to be donated. “This is volunteerism in action,” Fransman proclaimed. “I could go on and on.”

When it comes to the practical nitty-gritties, an office has been set up to coordinate the efforts of volunteers, and an unemployed man is writing a training manual. As a mark of commitment, when a volunteer joins the campaign, they have to sign a “Pledge 2013 And Beyond” (which lawyers might warn you is a vague timeframe). The pledge commits one to “willingly and voluntarily sacrifice, support, serve and diligently execute the tasks and responsibilities delegated to me by the movement.”

Further, you note that you do so “knowingly in order to contribute to build a non-racial, non-sexist and just society in our province the Western Cape”.

At the bottom of the pledge form, where you fill out your contact details, you are required to indicate in which sector you wish to make a contribution. The boxes available to be ticked range from Transport to IT to Research, but – if you like – you can also sign up for “canvassing & house visits” and “mobilising”.

A pamphlet sets things out a little more clearly. “If you would like a non-racist, non-sexist, free, prosperous and democratic South Africa” – and who wouldn’t? – “then the natural thing to do would be to step forward as an ANC volunteer,” it explains. Volunteers will be tasked with contributing to existing initiatives like the Community Police Forums or the Save Our Schools organisation, but are also encouraged to start their own projects.

Oh, there is one other thing. “Volunteers will also be called upon to drive its 2014 Elections Campaign.” DM

*Note: this is a metaphor. Fransman also emphasised that they had laid on no transport; those who attended did so of their own volition.