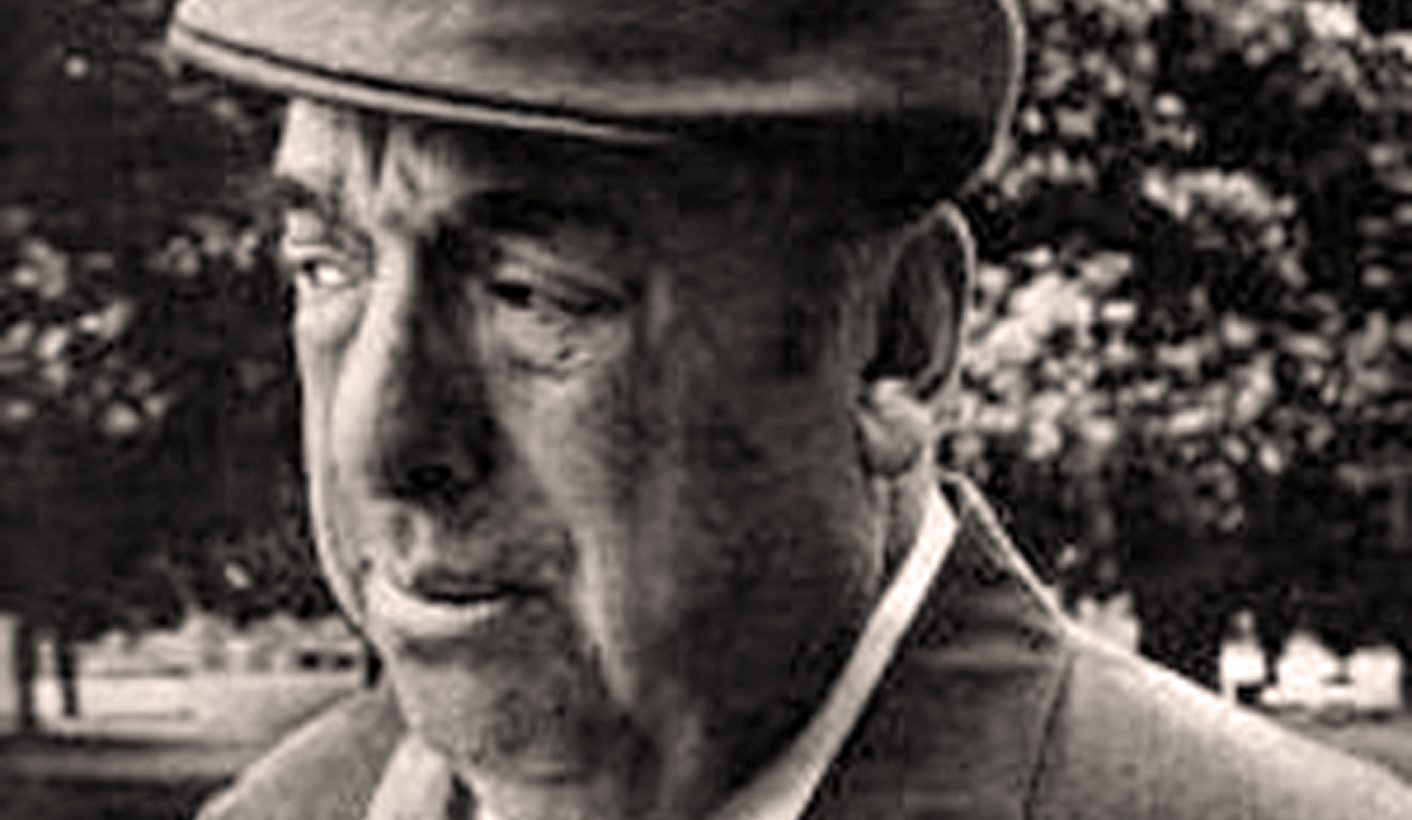 In Chile, the exhumation of the poet and Nobel Laureate Pablo Neruda has become a national moment. As the country tries to deal with its brutal past, its most beloved literary figure is once again stepping in to explain the world to us. By RICHARD POPLAK.

Once, it was dangerous to be a poet. To write poetry in Spanish, it seems, was to write one’s own death sentence. Frederico Garcia Lorca was killed at the outset of the Spanish Civil War, a conflict that also claimed his contemporaries Miguel Hernandez (exile, broken heart) and Antonio Machado (death sentence, tuberculosis). Of Lorca, killed by Franco’s regime for seemingly obscure reasons, a poet once wrote: “If one had searched diligently, scouring every corner of the land for someone to sacrifice, to sacrifice as a symbol, one could not have found in anyone or in anything, to the degree it existed in this man who was chosen, the essence of Spain, its vitality and its profundity.” The poet who wrote those words was Pablo Neruda. Substitute “Chile” for “Spain”, and the very same could be written of him.

For it has long appeared obvious to a sector of Chilean society that Pablo Neruda—love poet, poet-politician, Nobel Laureate—was murdered by the Pinochet regime shortly after it stole power 40 years ago. Neruda has long ceased to belong to Chile alone; if there was one poet in the 20th century who truly summed up the vocation’s ideal, its universal language, it must have been Neruda. Nonetheless, his political leanings, his boundless reserves of humanity, his passionate support of the disenfranchised, pitted him against the smallness, the conventional cruelty of a very real military junta with an agenda that did not include poetry or opposition politics. Neruda was murdered by poison, claim far too many Chileans to ignore. On Monday, to the strains of his work set to music, Neruda’s remains were exhumed. Soon, Chile will have an answer.

Photo: Rodolfo Reyes (L), grandnephew of Chilean poet and Nobel laureate Pablo Neruda, carries his coffin covered with the Chilean flag, inside the grounds of his house-museum after the exhumation of his remains in the coastal town of Isla Negra, about 106 km (66 miles) northwest of Santiago April 8, 2013 in this picture provided by the Communications Division of the Judiciary. The body of Neruda, dead nearly four decades, was exhumed on Monday after his former driver said the poet was poisoned under Augusto Pinochet’s dictatorship. Neruda, famed for his passionate love poems and staunch communist views, is presumed to have died from prostate cancer on September 23, 1973. But Manuel Araya, who was Neruda’s chauffer during the ailing writer’s last few months, says agents of the dictatorship took advantage of his illness to inject poison into his stomach while he was bedridden at the Santa Maria clinic in Santiago. REUTERS/Communications Division of the Judiciary/Handout

Disinterment has come into vogue of late. Here in South Africa, two coffins were recently pulled from the earth in order to shed some light on one of our own enduring mysteries – what exactly did Winnie Madikezela-Mandela have to do with the deaths of 20-year-old Lolo Sono and 19-year-old Siboniso Tshabalala. Said Sono’s uncle before an ANC cadre member shushed reporters away, “We are getting some relief because we know that we are closing the chapter of ‘we don’t know’ and we are opening the chapter of ‘here lies our son’.”

In Ramallah, Yasser Arafat was exhumed from his tomb under great secrecy, and his remains will be tested for signs of poisoning by two separate teams of Swiss and French experts. In 2011 in Chile, the democratically elected president Salvador Allende, who was said to have shot himself after the rise of the Pinochet junta, was also disinterred. The results of that exhumation were inconclusive, and as far as many Chileans were concerned, Allende’s death will always be an assassination.

Latin Americans have reached back further in time in order to test the strength of their historical narrative. As Ilan Stavans notes in a recent New York Times piece, Hugo Chavez exhumed Simon Bolivar’s remains in order to assess whether he had been poisoned. The results proved nothing either way.

There is something comforting in the knowledge that justice is willing to ferret out the circumstances of a death decades, centuries after the fact. History is not a stone tablet, but a palimpsest that can be scrawled over should new evidence, brought to bear by new technology, come to light. But in the case of Neruda, who remains one of the 20th century’s most important poetical voices, many wonder what more can be learned. Even if the exhumation and subsequent tests prove that Neruda died of prostate cancer as the Pinochet regime contended, will that lessen Pinochet’s manifest evils? Conversely, should it turn out that Neruda was indeed poisoned, will this make Pinochet’s countless crimes mean more? Does the death of a Nobel Laureate weigh heavier than the deaths of thousands of regular people? It was, of course, the Americans who supported General Augusto Pinochet’s coup, so it is perhaps unsurprising that history has been far kinder on the junta than it deserves. Allende shot himself/was murdered on 11 September 1973, and 12 days later, Neruda died. It seems far too perfect to conspiracy theorists that two of the regime’s greatest foes should pass away within two weeks of one another, leaving the road free of obstacles for the atrocities to come.

Neruda once ran for president as a Communist. He read poetry to a crowd of over 100,000 in Brazil, and to 70,000 screaming fans in Santiago shortly after receiving the Nobel. Few writers in history have been able to pull in those numbers. If he had had a Twitter account, it would’ve crashed the server. Even his pseudonym was loaded – he took his last name from the Czech poet, social realist (and rabid anti-semite) Jan Neruda. His fealty to the Communist party won him few friends – in 1948, after a warrant was issued for his arrest by the arch-conservative government of president González Videla, he hid in a basement for months, and then escaped into exile in Argentina. His life was wild, and wildly off centre. But when one starts digging into the poetry, the politics – while important – fade away. His pen was at its most lethal when he wrote about love.

Not love in the romantic sense – Rumi he wasn’t – but love in the earthy, sticky, bloody sense. There are few poets of the sensual as, well, sensual as Neruda was at his best. But there were always clues that love is always a political act, because nothing can be shorn from politics. As he wrote in And because Love battles:

And good, this danger

is danger of love, of complete love

and if this love brings us

the death and the prisons,

I am sure that your big eyes,

as when I kiss them,

will then close with pride,

with your pride and my pride.

Neruda’s power hasn’t faded at all. Young, amorous Latin Americans still give his books of poetry in order to sleep with one another. He’s no more dead than he was when he was living. Pulling him out of the ground to test his bones for signs of Pinochet’s brutality may amount to nothing. But one imagines he would have approved of the process. “History” is just a word to be used in a poem. Poetry is all that matters. DM