The curious case of Winnie, re-visited 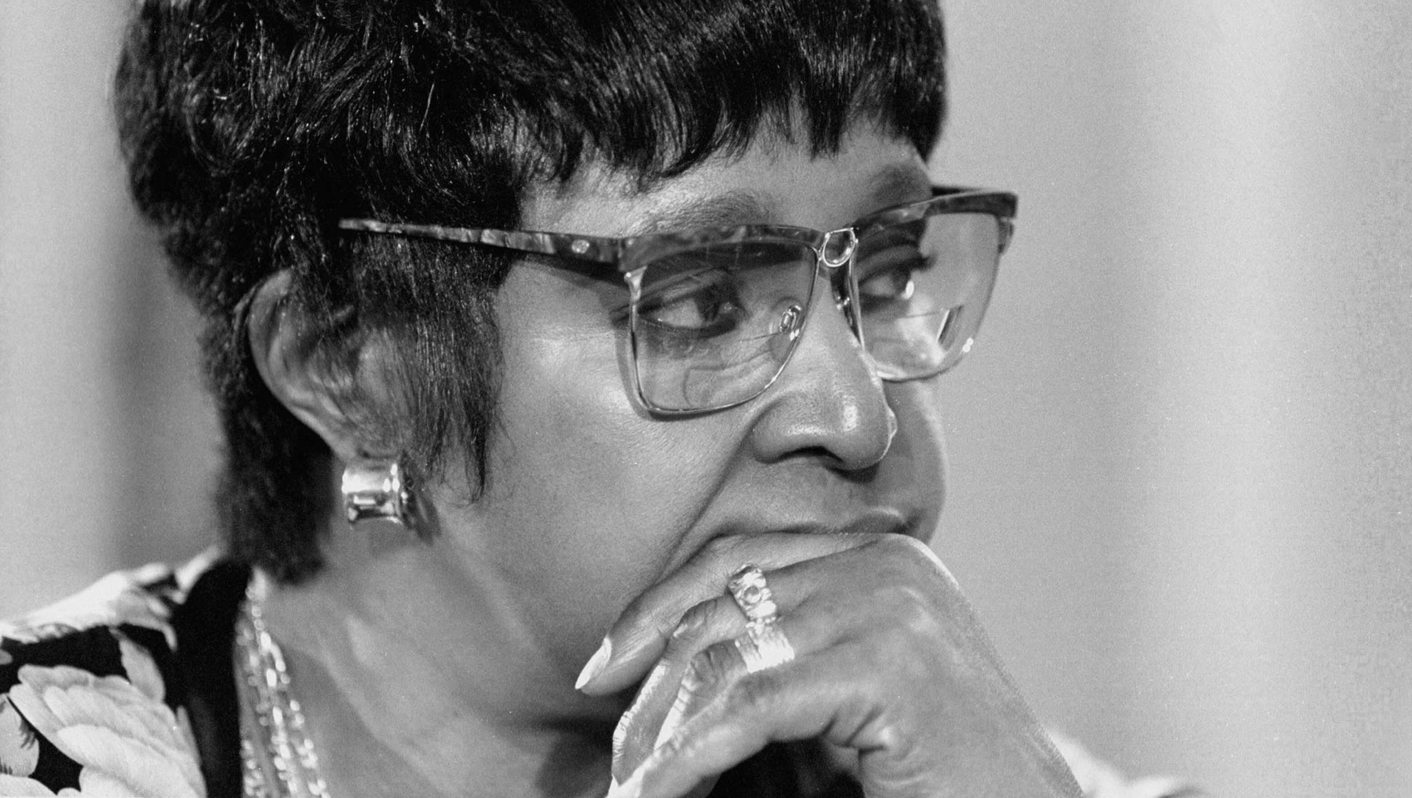 More than twenty years ago, Winnie Madikizela-Mandela stood trial on eight counts of kidnapping and assault, that followed the death of Stompie Seipei. Closer to twenty days ago, news broke that the bodies of two young activists were being exhumed and further charges considered for ‘the Mother of the Nation’, linked to their killings. We found this 1991 account by MILLARD W. ARNOLD in Baltimore Sun, just a day before Winnie appeared in court, both fascinating and worth reading again.

Nothing is more riveting than impending tragedy. Nothing is more wretched than a fall from grace. And so it is that Winnie Mandela, who for more than a quarter of a century has stood as a defiant symbol of strength and resistance to the evils of Apartheid, is scheduled to enter a Johannesburg courtroom tomorrow and stand trail as a common criminal on eight counts of kidnapping and assault.

The charges against her arise from the death of Stompie Moeketsi Seipei, a 14-year old political activist who was abducted by members of the “Mandela Football Club,” brought to Winnie’s home, beaten and was later murdered by the team’s coach. Her position is perilous; the press revelations are sensationally damning.

Her day in court will come, and the truth, or something approximating the truth, will be known. But whatever the outcome of Winnie’s trial, it will do little to explain this complex and evocative woman who has become a modern day Medea.

What greater irony can there be for a woman who not long ago was endearingly referred to as the “Mother of the Nation” to now find herself facing trial for assault leading to the murder of a child? What greater anguish can there be than a year after her husband’s release from prison she should go on trial and face the possibility of incarceration herself? What are the reasons for the stunning plunge to the depths of scorn and ridicule to which she has now descended?

When Nelson Mandela was imprisoned 27 years ago, he was not only physically removed from political activity, he was silenced as well. In an effort to eradicate his massive appeal, the South African government would not allow him to publish any writings or to be quoted. Winnie was determined that Nelson would not be forgotten. Through her, his name would live on, and the struggle would continue.

She became politically active and, in so doing, was constantly harassed by the police. With the exception of one 18-month period, she was banned from public life for 23 years. Once, she was imprisoned while pregnant, and later held in solitary confinement for nearly a year and a half. Inevitably, the cruelty to which she was subjected left a residue of bitterness that was as much a part of her as the name she cherished.

On June 16, 1976, Soweto, the large black ghetto outside of Johannesburg, erupted in rage as students protested against Apartheid. From that point on children would become the cutting edge of insurrection in South Africa, destroying all local authority and eventually rendering the townships “ungovernable.”

Winnie possesses an indisputable love for children. Authorities were aware of that, and believing she was – or could be – behind the unrest, Winnie was banished from Soweto to Brandfort, a desolate community some 300 miles away, a place where she could not even speak the language of the people. For eight years, she was exiled internally.

Within the townships during this period, parental and traditional authority had broken down, and the government-imposed town councils were not recognised. By 1984, the “Young Lions” and “comrades” were the governing forces. In response, elements within the government trained black gangsters, established hit squads and used black surrogates to squash resistance and regain control over the townships.

The clashes between the comrades and government vigilante groups led to sheer anarchy. There was no law and order, as the police permitted roving gangs of thugs to ravage homes, to terrorize the community and threaten or assassinate those political leaders who had not been jailed. Uncontrolled by the government and not trusted by the townships, the police were indelibly linked to the gang violence they condoned. It was a horrific struggle for survival; at the time, the worst recorded outbreak of unrest in South African history.

In retaliation, armies of young people roamed the streets, only to be gunned down or detained by the security police. Those who were detained were tortured. Many of those that were tortured became informants for the police.

As the community watched its children and friends decimated by police and marauding gangs, street committees were formed to dispense justice. Those who were founded to have betrayed the struggle by divulging information, even if under duress and police pressure, had effectively sided with the oppressors. The penalty for betrayal was swift and ghastly: the betrayer was summarily “necklaced” – trussed with automobile tires, doused with gasoline and set on fire.

It was undeniably repulsive, but the social fabric of the community has all but come unravelled. These were gruesome times, where the only authority was mob justice.

As the unrest swept the country, Winnie’s home in Brandfort was firebombed. Isolated and afraid for her life and that of her children, she simply “unbanned” herself and moved back to Soweto. It was now late 1985 and the height of the township turmoil. The police responded by dragging her from her home, barring her from Johannesburg and threatening her with detention.

She was not deterred. She returned to Soweto. There was an intense liberation struggle taking place in the township, and the name “Mandela” had to be associated with it.

By mid-1986, unable to control the violence, the government declared what was obvious to all: a state of emergency. With the breakdown in authority, anti-Apartheid organisations tried to provide community structure, but no one could control the youth. Principally as a result of her banishment, the major anti-Apartheid organisations had little contact with Winnie. It was unfortunate – and ultimately tragic. Had they been able to provide protection and support for such an important figure, she might not be on trial.

For Winnie, the only viable vehicle for change was her constituency, the youth who regarded her as “Mamawetu” – “Mother of the People.” Devoted to the struggle, and intoxicated by the role she had created for herself, Winnie failed to realise what was happening to her and around her. Carving out a political base of her own, she managed to reconcile two warring factions of youth, elements of which were subsequently to become the notorious Mandela Football Club.

In an effort to bring some stability to the community, she began to dispense justice arbitrarily through an ad hoc disciplinary committee made up of members of the team. Throughout the township rumours and accusations of cooperation with the system abounded. The football club, imbued with the mystical name of “Mandela,” saw itself as an unofficial police force and paramilitary wing. As the rumours were heard, people were rounded up the team and brought to Winnie’s home for the administration of “people’s justice.” Winnie often participated.

The brutality of the team, even under the brutal conditions of the township, became what would later be characterised as a “reign of terror.” It was beginning to slip away from Winnie, yet she refused to acknowledge the seriousness of the allegations. By mid-1988, Winnie herself had become an issue.

In one of South Africa’s other provinces, an astonishingly sophisticated 11-year-old had made a name for himself as the leader of an army, 1,500 strong, known as the “Under Fourteens.” He was Stompie Moeketsi Seipei, the “young general.”

Eventually captured, he became the youngest detainee in South African history. Under the unrelenting torture of the police, he apparently talked. Upon his release from detention, he eventually made his way to Soweto. Believed to have given the police information that led to the death of four comrades, Stompie was brought to Winnie’s home. There, she reportedly beat him and said that he was “unfit to live.” He was never seen alive again.

Winnie is charged with kidnap and assault. No one says that she killed Stompie. What is asserted is that she has lost the trust of the people, refused to accept the discipline of the anti-Apartheid organisations and, perhaps more seriously, has tarnished the name of “Mandela.” She acted alone, and, in the name of justice, injustice was done.

Throughout it all, she steadfastly maintains that she was a revolutionary, and that she was at war with a system that was viciously trying to maintain privilege and power by turning black against black. In the youth-led struggle for liberation, a juvenile is not a child but a soldier. For Winnie as “Mother of the Nation,” a soldier whose action leads to the death of other soldiers had to be punished. In a people’s struggle against oppression, people’s justice was the only alternative.

The reality is that Winnie is as much a victim as she is an accused. Although it will not become such, her trial is a trial of the entire system of Apartheid. For she is a product of a system which dehumanises and leads to the excesses for which she is indicted. It is against the system that she fought; it is the system which will try her.

In a country where no black person remains untouched by tragedy, no one has suffered more than this 56-year-old grandmother. For much of her life, she was a wife without a husband, a mother separated from here children, a leader forced into exile.

Today, when the fiery embers have cooled for most of her age, Winnie remains defiantly vulnerable, bitterly hurt and yet unbowed. The accusations, the rebukes, the trial, the possibility of jail or death, do nothing to shake her fundamental belief: in the township, she made “Mandela” synonymous with liberation; she fought for freedom. DM

Main photo: Winnie Madikizela-Mandela listens to the testimony of a witness during a special public hearing of South Africa’s Truth and Reconciliation Commission in Johannesburg November 25, 1997. Winnie Mandela is accused of a murder of Stompie Seipei, a 14-year-old activist who died in 1989. (REUTERS)