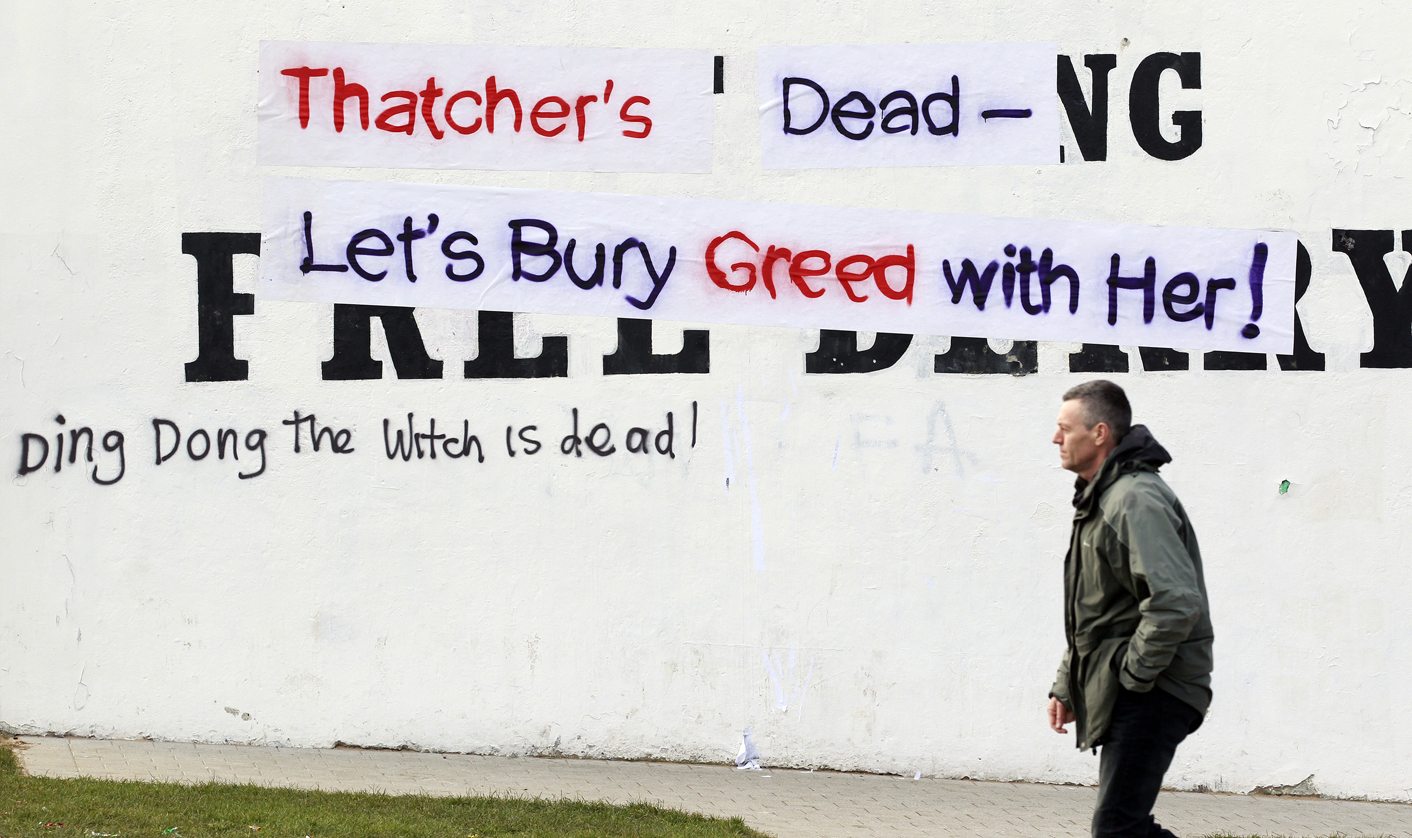 LONDON, April 9 (Reuters) - Admirers of Margaret Thatcher on Tuesday mourned the "Iron Lady" who as Britain's longest serving prime minister in over a century pitched free-market capitalism as the only medicine for her country's crippled economy and the crumbling Soviet bloc. By Guy Faulconbridge and Kate Holton.

World leaders past and present, from former Soviet leader Mikhail Gorbachev to U.S. President Barack Obama, led tributes to the grocer’s daughter who sought to arrest Britain’s decline and helped Ronald Reagan broker an end to the Cold War.

“The world has lost one of the great champions of freedom and liberty, and America has lost a true friend,” said Obama.

While world leaders praised the most powerful British prime minister since her hero Winston Churchill, the scars of bitter struggles during her rule left Britain divided over her legacy.

Opponents celebrated in London, the English city of Bristol and the Scottish city of Glasgow, cheering her death and toasting to the death of “the witch” with champagne and cider.

“We’ve waited a long time for her death,” said Carl Chamberlain, 45, unemployed, sporting a grey ponytail and sipping on a can of cider in Brixton, London, the scene of riots in 1981.

Tuesday’s newspapers told the story: “The Woman Who Saved Britain”, declared the Daily Mail while the Daily Mirror, led on “The Woman Who Divided A Nation” in an article which questioned the grand, ceremonial funeral planned for next week.

Thatcher’s body was removed overnight in a transit van with police escort from the Ritz Hotel where she had died on Monday morning following a stroke.

Thatcher’s final journey on April 17 will take her from a chapel inside the Palace of Westminster – where she deployed fearsome and forensic debating skills – to a St Paul’s Cathedral where she will arrive on a gun carriage drawn by horses from Queen Elizabeth’s artillery.

The Queen and her husband, the Duke of Edinburgh, will attend the funeral, which is likely to be the grandest funeral for a British politician since Churchill’s state funeral in 1965. Though accorded full military honours, Thatcher did not want a state funeral. She will be cremated.

Parliament will return from recess for a special session in her honour on Wednesday.

The unyielding, outspoken Thatcher led her Conservative party to three election victories, governing from 1979 to 1990, the longest continuous term in office for a British premier in over 150 years.

She struck up a close relationship with Reagan taking a hostile view of the Soviet Union, backed the first President George Bush during the 1991 Gulf War, and was the first major Western leader to discover that Gorbachev was a man she could “do business with”.

“Very few leaders get to change not only the political landscape of their country but of the world. Margaret was such a leader. Her global impact was vast,” said Tony Blair, whose term as Labour prime minister from 1997-2007 he acknowledged owed a debt to the former leader of his Conservative opponents.

Conservative Prime Minister David Cameron cut short a visit abroad and flags flew at half mast. “The real thing about Margaret Thatcher is that she didn’t just lead our country, she saved our country,” Cameron said.

Mourners laid roses, tulips and lilies on the doorstep of her house in Belgravia, one of London’s most exclusive areas. One note said: “The greatest British leader” while another said to “The Iron Lady”, a soubriquet bestowed by a Soviet army newspaper in the 1970s and which Thatcher loved.

But, in a mark of lingering anger at a woman who explained her belief in private endeavour by declaring “there is no such thing as society”, someone also left a bottle of milk. To many Britons she remained “Maggie Thatcher, Milk Snatcher” for scrapping free milk for schoolchildren when she was education minister in 1971.

Having retreated into seclusion after being deposed by her party, the death of her businessman husband Denis in 2003 and creeping dementia had kept her out of the public eye for years. She had been in poor health for months.

The abiding domestic images of her premiership will remain those of conflict: huge police confrontations with mass ranks of coalminers whose year-long strike failed to save their pits and communities; Thatcher riding a tank in a white headscarf; and flames rising above London’s Trafalgar Square in riots over a deeply unpopular “poll tax” which contributed to her downfall.

To those who opposed her she was blunt to a degree.

“The lady’s not for turning,” she told Conservatives in 1980 as some urged a “U-turn” on the economy in the face of rising job losses and crashing poll ratings.

She stuck to her plans to pare state spending but could thank victory in the Falklands – known in Argentina as Las Malvinas – in 1982 for helping her bounce back to re-election.

Argentinians were less moved to praise her than Falklanders who called her “our Winston Churchill”. In South Africa, too, there was a coolness after her death as its new, democratic leaders recalled her prevarication on apartheid.

In Europe, many in the east had warm words for her refusal to back down against Moscow and the inspiration of her reforms of a centrally planned economy. Among those were Chancellor Angela Merkel, a fellow chemist from East Germany who rose to become her reunited country’s first woman leader.

In western Europe, where the late French Socialist president Francois Mitterrand once grappled with a conundrum he described as having “the eyes of Caligula but the mouth of Marilyn Monroe”, there was respect for her achievements though never great fondness for her “handbagging” lectures on saving money.

Brought up in a flat with no hot water above the family grocery in the eastern English town of Grantham, Margaret Hilda Roberts learned thrift and hard work from her Methodist father Alfred before going to Oxford University to study chemistry.

She met her wealthy husband Denis, a divorcee a decade her senior, at a Conservative dinner party. They married in 1951 but the young Thatcher faced snobbery from the party grandees: she was female and far too lowly.

As Conservatives and Labour traded power and blame for an economic and diplomatic decline in the early 1970s, Thatcher was manoeuvring behind the scenes and surprised the party by winning the leadership from former premier Edward Heath in 1975.

She made her mark – after a makeover that changed her hair and her voice – by focusing on fiscal prudence and common sense – potent messages when made against the backdrop of the 1978-79 “winter of discontent” when strikes brought Britain’s economy to a halt with 3-day working weeks and power shortages.

But the struggles that followed left their mark on Britain.

“She absolutely decimated mining communities with her policies and we will never ever forgive her,” said Stephen Brunt, a former miner and union representative, told Reuters in the northern English town of Barnsley, the scene of pitched battles between striking miners and police in the 1980s.

“When I heard the news she had died, I shouted out ‘rejoice,'” Brunt said. “She is reviled around here.”

Her personal credo, founded on competition, private enterprise, thrift and self-reliance, gave birth to a political philosophy still referred to as “Thatcherism”.

Millions in Britain pay tribute to her radical policies, such as selling off of public housing to its tenants.

But many recalled past bitterness, including in Northern Ireland where republican leader Gerry Adams said she had caused “great suffering”. She took a hard line during a hunger strike in which 10 republican prisoners died in 1981, and three years later she survived a deadly Irish bomb attack on her party conference.

Thatcher relished her image and humiliated Geoffrey Howe, one of her most respected ministers, in front of the cabinet, helping to spur his resignation and her own downfall.

But behind the doors of her Downing Street residence she would insist on making tea for her ministers, take care over her impeccable outfits and relax with whisky and water after the 18-hour days which became the norm of her rule.

Thatcher’s combative opposition to greater European integration antagonised allies in Europe and her own ministers but which still strikes a chord with those in Britain today who fear being drawn into the troubles of the struggling euro zone.

In a few tense weeks at the end of 1990, Thatcher fell from power as some of her most senior ministers, including Howe, turned on her in what she said later was treachery. Thatcher never really recovered from her ousting.

“We are leaving Downing Street for the last time after 11 and a half wonderful years and we are very happy that we leave the United Kingdom in a very, very much better state than when we came here,” Thatcher said. For many, the tears she shed that day gave a shocking glimpse of human frailty behind the handbag.

Descending into dementia after years at the top table of world politics, Thatcher became almost a recluse, living out her life behind the white-stucco walls of her Georgian townhouse. DM

Photo: A man makes his way past graffiti daubed on the Free Derry Corner in the Bogside area of Londonderry, northern Ireland April 9, 2013. Britain and admirers worldwide are mourning Margaret Thatcher, who has died aged 87, as the “Iron Lady” who rolled back the state and faced down her enemies during 11 years as Britain’s first woman prime minister. REUTERS/Cathal McNaughton