Margaret Thatcher, The Iron Lady, mortal after all 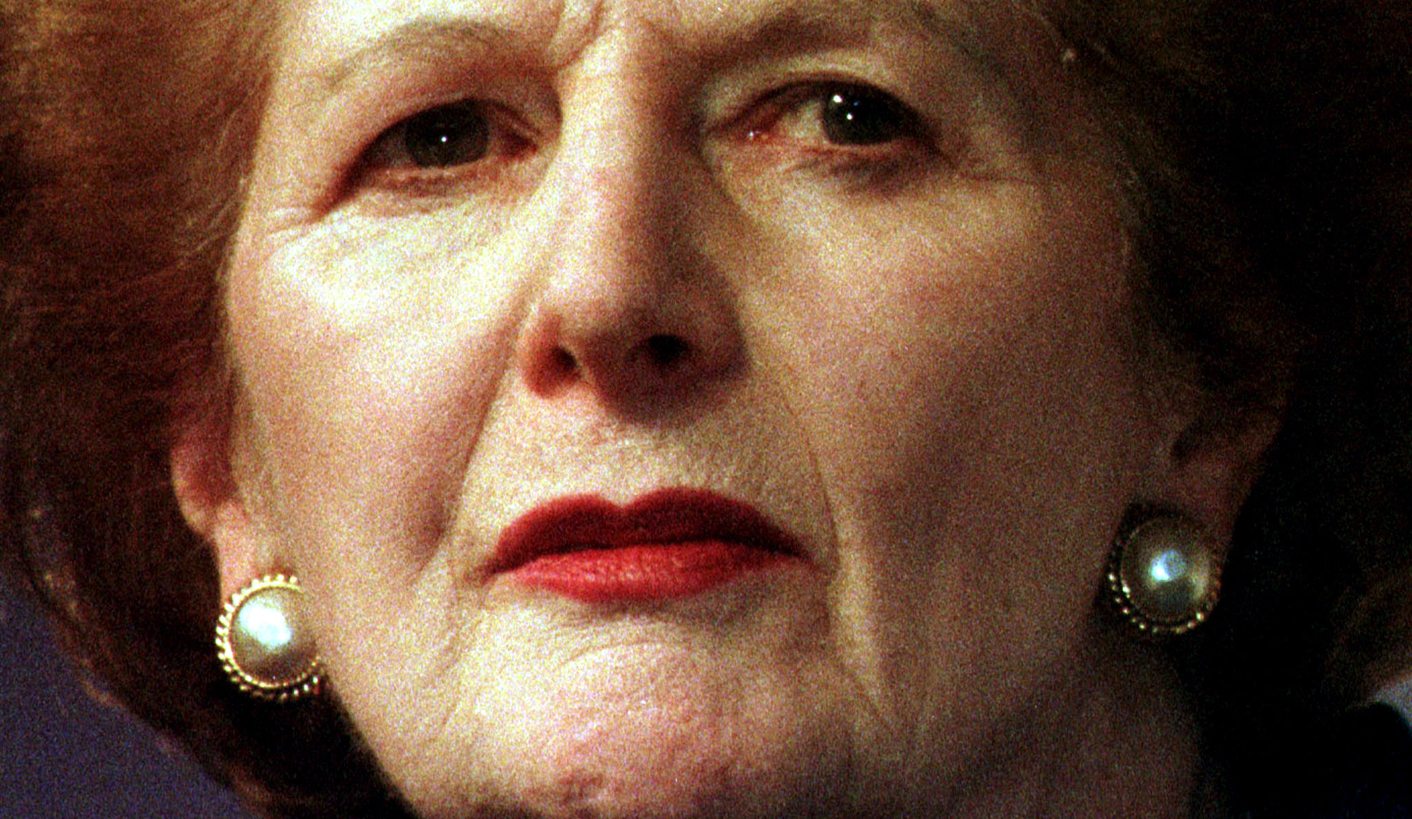 Margaret Thatcher is most widely remembered for ensuring that not an inch of British territory was surrendered in the Falkland Islands fracas to the bully boys of the Argentine military junta. But it was her passionate embrace of free market and its broader political implications that helped her start a global revolution in government economic stewardship. J BROOKS SPECTOR examines the legacies of the woman who put Britain back on the map.

By the time her political life had been fully led, she had become an instantly recognisable “ism” – unlike the impact of almost any previous British prime minister. “Thatcherism” was a blend of steadfast free market economics and trimming back hard at government subsidies and entitlements at home; forceful, assertive pro-Western alliance policies abroad; and a revolutionary approach to British politics – especially her own political home, the Conservative Party, when she brought in the techniques and ideas of American-style campaigning to the closed world of British electioneering.

Born the stalwart upper-lower-middle-class grocer’s daughter with conservative values to match, and groomed by her father to grasp for political leadership; after a university education in chemistry at Oxford, step by step she constructed herself into the perfect political animal (with the help and guidance of veteran politicians like Keith Joseph) with a deft, devastating turn of phrase used to skewer opponents. Thatcher frankly revelled in and was at her best when she was taking on a stubborn opponent – whether it was miners union’s head Arthur Scargill, Argentina’s authoritarian admirals and generals, the Soviet Union’s Mikhail Gorbachev – or even the  “wets” of her own, by-then-spineless, principle-less Tory Party.

By the time she was forced to relinquish the prime ministership after more than 11 years in office – more than any other 20th-century prime minister and, incidentally as the country’s first and only female prime minister – she had rebuilt British society, its economy and, most of all, its politics. While many believed then and still believe now that her influence was ruinous on Britain’s cradle-to-grave socialist environment, few will argue she was without a permanent impact on her nation.

Along the way, as she infuriated her opponents, she also created a political persona easy to lampoon – or underestimate at one’s political peril. But she also described, then inhabited, a place in British and global politics that has since been almost impossible to be occupied by anybody else. Along the way, Thatcher forged a partnership with US President Ronald Reagan that helped reconstruct the global landscape. Sometimes some people sniggered that she was the real backbone (and brains) in that partnership, but the US president always fervently embraced her ideas, her support – and her spirit.

Along the way, Thatcher’s boundless enthusiasm for this free marketeerism and its broader political implications – and her belief in its healing, cleansing values for restoring self-respect and vigour in a society – also helped create a global revolution in government economic stewardship. Summing up her impact, The Economist has already pronounced on her legacy, saying, “her willingness to stand up to tyranny helped to bring an end to the Soviet Union. Winston Churchill won a war, but he never created an ‘ism’.”

At its heart, Thatcherism stood in opposition to the status quo – in effect her “ism” bet the house on freedom. For some this could have seemed at cross-purposes with her political philosophy of exuberant conservatism, especially given her controlling management and personal styles. Nevertheless, she believed nations and individuals only truly became great – or returned to greatness – if they were set free. As a result, whatever she did was aligned to her fundamental belief that everyone had the right to run their own lives as free as possible from the interference of that dreaded nanny state.

Her domestic political battles helped give birth to the idea that she was some kind of suburban Boadicea, wearing a good string of pearls and sensible shoes, hammering away at the recalcitrant striking coal miners. But she was just as tough on her own team, mercilessly beating up on the old-style “wets” who reigned from their moneyed enclaves, dusty men’s clubs, and dustier political nostrums. Famously, when British unemployment had moved beyond 2 million persons, she had confronted her own in-house critics in a wickedly clever turn of phrase, “You turn if you want to, the lady’s not for turning.” Take that, you old fogies!

However, despite her success in reshaping her own party in her own image and holding onto the prime ministership for more than 11 years (winning three elections along the way), paradoxically, the impact on her own party was that it effectively stopped being a truly national entity. During her time in power and from the effects of her policies, as an active political force the Tories retreated back to the prosperous southern quadrant of the nation and the lusher suburban swathes; surrendering Scotland, Wales and the virtual expanse of all of the more northern cities to Labour (or smaller regional parties).

Thus, in an ironic turn, rather than John Major – the politician from her own party who had succeeded Thatcher when she was driven from office – Labour’s Tony Blair benefited most from Thatcher’s reconstruction of British politics. After the rancorous trade unions had been politically neutered, it was Tony Blair who could reconstruct his own party as the “third way” – and then sell it effectively to the vast political and social middle ground in the UK. Blair’s own big win in 1997 brought in 13 years of Labour rule (but it was a Labour as refashioned by Blair) until it was effectively undone by Blair’s embrace of George W Bush’s Gulf War II.

But rather than the old-style, fire-breathing, red flag-waving Labour Party of yore, this was a Labour Party whose leader, Tony Blair, could claim, “The presumption should be that economic activity is best left to the private sector.” This too was a legacy of Margaret Thatcher’s impact on the British political scene, long after she had left office.

Beyond her reshaping of the British domestic political world, years after her departure from the scene, her views continue to be felt internationally. Hers was a Britain that intellectually punched well above its weight class, measured by national GDP alone. Without doubt, she was the first UK leader since Churchill in World War II who was taken seriously by the heads of every major world power. Eastern European politicians and activists opposed to Soviet-style government and Russian domination idolised her approach, and her arm-in-arm, joined in common cause with Ronald Reagan thereby blocked the Soviet Union at nearly every turn – eventually helping force a change of thinking deep within the Kremlin itself. Even so, her view of Gorbachev as a man the West “could do business with” helped nudge the Cold War to a conclusion.

The Thatcherite revolution continued further. By the mid 1990s, Russia had privatised thousands of industrial institutions; India had begun to break down the “licence Raj” of nearly impenetrable, red-tape ridden bureaucratic control; and her impact helped generate a further wave of similarly free market activity across Latin America. And during Ronald Reagan’s presidency and extending well into his successors’ terms of office (even unto the terms of Democratic presidents), the predominant style of US government became one that drew back from expansionary government and regulation. Perhaps this pendulum is moving back towards governmental interventionism in the wake of the 2007-8 financial crisis, but, even so, this is in reaction to the Thatcherite revolution.

In the popular view, of course, Margaret Thatcher’s place in history is assured because of her insistence that not an inch of British territory should be surrendered to the likes of the thugs of the Argentine military junta. As a result, she chivvied her government and its defence establishment into carrying out an audacious – and successful – military counterstrike from the UK to the distant reaches of the Falkland Islands in the Southern Atlantic Ocean; this after the Argentine military had sent an occupying force to those same disputed islands in 1982. (Ironically, perhaps, Margaret Thatcher also agreed to the reversion of the British colony of Hong Kong to China to take place at the end of the 20th century.)

Closer to home, back in the 1980s, Margaret Thatcher had infamously characterised the ANC as a terrorist organisation that should never have a role in governing South Africa. In spite of that view, the South African government, in commenting on her passing (and mindful, perhaps of how a friendly nation will react to the passing of a major politician who dominated the political life of a nation over the course of a generation), announced on Monday: “President Jacob Zuma has, on behalf of the government and the people of South Africa, expressed his heartfelt condolences to the government and the people of the United Kingdom, as well as to the family of former Prime Minister Thatcher following her death earlier today at the age of 87. President Zuma said: ‘Our thoughts and prayers are with the family of Lady Thatcher and the people of the United Kingdom during this difficult time.’” Given her comments about South Africa’s liberation movements, that seems a rather magnanimous statement of solicitude from the South African government.

Doubtless, in the coming days and weeks ahead, and certainly during the official state funeral that will take place, there will be encomiums from many quarters on the continuing impact of Thatcher’s ideas and the force of political personality. And many people too will find the elements of their own image of Thatcher drawn from Meryl Streep’s astonishing portrayal of  “The Iron Lady” in a recent film bio-pic.

But perhaps a defining moment of her own softer side can also be remembered from her eulogy at Ronald Reagan’s funeral – her friend and fellow traveller on ideological and geo-political battlefronts for a decade. These comments, her final moment in the global spotlight after she had suffered a stroke in 2002, came two years later. At that service, she was seated behind Nancy Reagan and adjacent to Mikhail Gorbachev in Washington’s National Cathedral – her prerecorded words coming from a giant video screen as she sat very quietly and reflectively in her pew. DM

For more, read, among the thousands of stories that will be published about her in the days ahead: