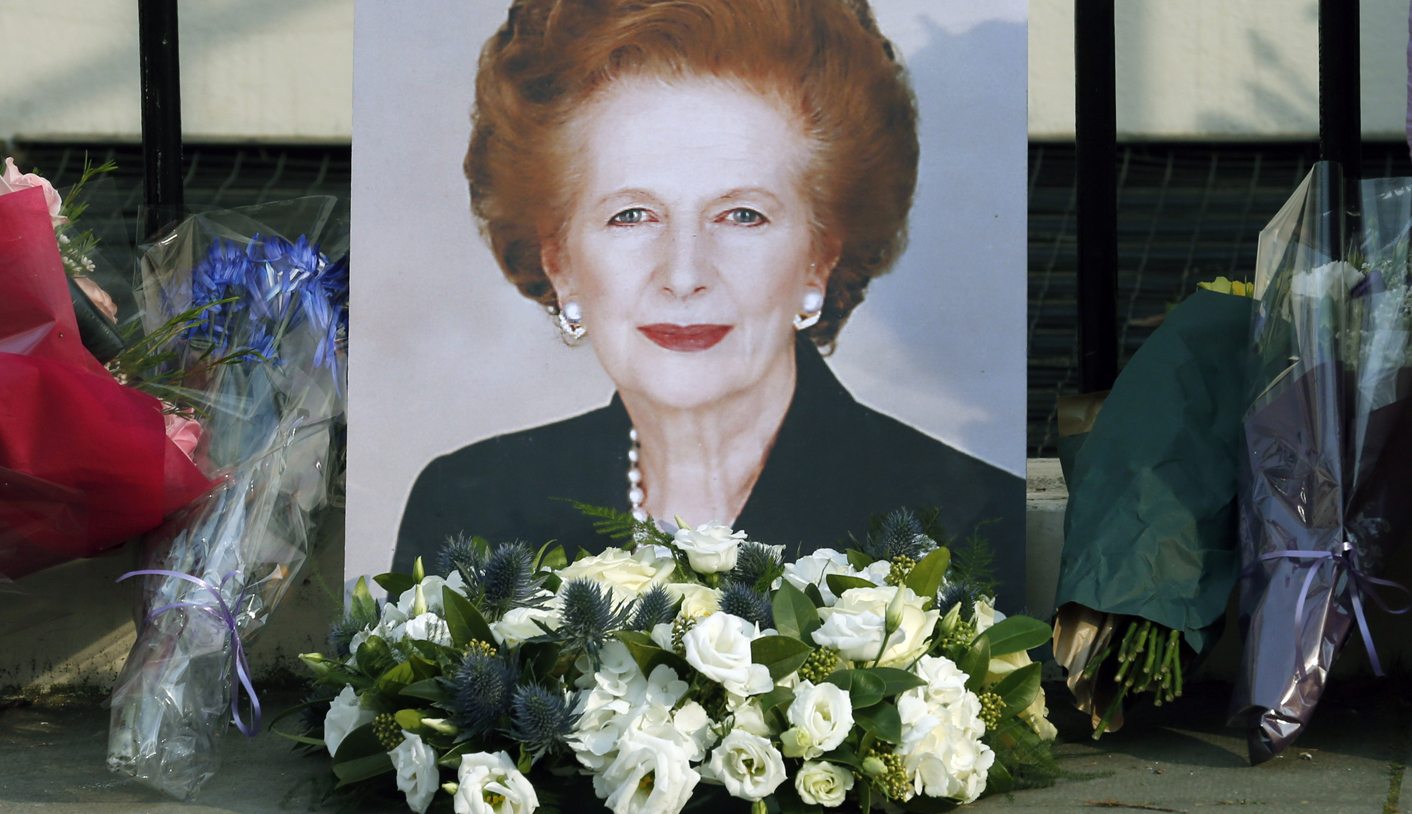 My immediate and lasting memory of Mrs. Thatcher - Maggie as we called her - is sitting next to her in the late 1960s at a dinner table as she scorched a bunch of City of London financial types. I was astonished. She wasn't yet the Iron Lady. She wasn't in government. Labour was in power. She was an obscure back bench Conservative MP, elected only in 1959, noticed in those sexist days as much for her hats and aggressive hair style as for her passionate defence of grammar schools under threat of closure from Labour. By Sir Harold Evans.

What she did with the City of London men was later characterised as a “hand-bagging.” A black Asprey bag she always carried was metaphorically wielded against people she saw as standing in the way of the greatness of Britain, as Boudica, the leader of a British tribe, wielded a lance against the Roman occupiers. I suppose that as the new national editor of The Sunday Times of London, and with normal male presumption, I had expected to lead the questioning of the ten or so big names and the table. I didn’t stand a chance.

Maggie pounded and pummeled them all by herself for an hour. I can’t pretend this is verbatim but it went something like this: “All you people are interested in is moving paper around, making money not things. What are you doing for British industry? When are you going to help business stand up to the unions?”

They murmured, they shuffled, they were outclassed. British elections – six weeks to a vote and no paid television ads – have never been as corrupted by money as much as those in America, so she was not turning off a potential source of funding as an American candidate would fear to do. Still these were men – all men of course – who were influential and articulate and used to reverence not rebuke.

Maggie could be seductive in private conversation one on one, more so as she matured, the strident voice of the public halls giving way to a softer, more seductive style, hand on an arm, intent eye to eye in persuasion.

She was afraid of nobody, respecter of no convention she considered archaic. The British custom at dinner parties was always for the host to murmur “coffee?” which was signal for “the ladies” to leave for the powder room while the men, over cigars and port, got down to serious business. It was a small sensation, regarded in some circles as a grave breach of etiquette, when at a dinner party I attended thrown by her egregious confidante Woodrow Wyatt, Maggie stayed in her seat unabashed, uninvited, and unfazed by the arguments over the cigars – in this case by a couple of captains of industry who wanted to be part of Europe while she defiantly raised the Union Jack.

The trade unions in Britain at the time were busy wreaking havoc on industry. The far left had infiltrated Labour constituencies. Labour candidates were as scared of the militants then as primary Republicans are of the Tea Party candidates today. Local union chiefs called wildcat strikes and disrupted production.

The union movement, with some Labour ministers in support, threatened a closed shop in the press which would have curtailed free speech. I’d spoken out against it as had the then editor of The Guardian, Alastair Hetherington. At another of those endless London dinners where Maggie was the speaker and still not in government, she referred to me as “one of us.” I wasn’t.

I was just expressing a view on an issue. We had many things in common, both from the north, both educated in state schools, both brought up in a grocer’s shop, in my case one my mother started, in hers one her father ran. I admired her. I was one of the millions of voters in the 1979 general election which put her into power as the first woman prime minister. The country was in dreadful shape, fearful and anxious during a winter of discontent in which trade union militants blocked cancer patients getting treatment and garbage piled up in the center of London.

She saved Britain from anarchy and immediately restored a sense of purpose. She could be rough. As Prime Minister, she had a limited tolerance for dissent and an infinite regard for personal loyalty. If you were not with on her everything, she regarded you as disloyal, as unreliable, lacking conviction. I suppose it was the reverse mirror of her indomitable courage.

How valiant she was when the IRA terrorists blew up her conference hotel. They tried to murder her and almost succeeded. She was often vindicated. She was impatient with excuses for inertia and woolliness – vividly represented in Meryl Streep’s representation of her cutting off a Cabinet member in mid speech.

I disappointed her by giving space in The Times to critics, especially one of them, Edward Heath, whom she’d ousted as Prime Minister. The imperatives of news meant we published news stories she didn’t like. She’d sunk in the polls and recession deepened. Relations became a little chillier. As an editor, I’d never sought to cosy up to political leaders, but I now understand more of what she was up against – the Tory snobs in the counties, the plotters in the party who eventually betrayed her, the “wets” and the “wimps” who would yield on a principle she considered vital.

When she became Prime Minister I was editor of The Times. We backed her a hundred per cent on trade union reforms, on holding the line on pay, especially in the public sector and on advocating more competition in the banking industry, on free trade, on resisting terrorism in Northern Ireland. I told her I thought she moved too slowly against trade union anarchy, but she bided her time and planned well. She won a famous victory against the coal miners, badly led by a firebrand who took money from Gaddafi, and it was thanks to her stalwart support of Rupert Murdoch, whom she admired as a free-booting entrepreneur, that he was able to win the battle of Wapping which ended the guerilla warfare of the print unions.

Margaret Thatcher, whatever the missteps, will take her place in the pantheon of heros – sorry, heroines – who enlarged British freedom. DM

Photo: A portrait left by mourners is seen outside the home of former British prime minister Margaret Thatcher after her death was announced in London April 8, 2013. Margaret Thatcher , the “Iron Lady” who transformed Britain and inspired conservatives around the world by radically rolling back the state during her 11 years in power, died on Monday following a stroke. She was 87. REUTERS/Suzanne Plunkett