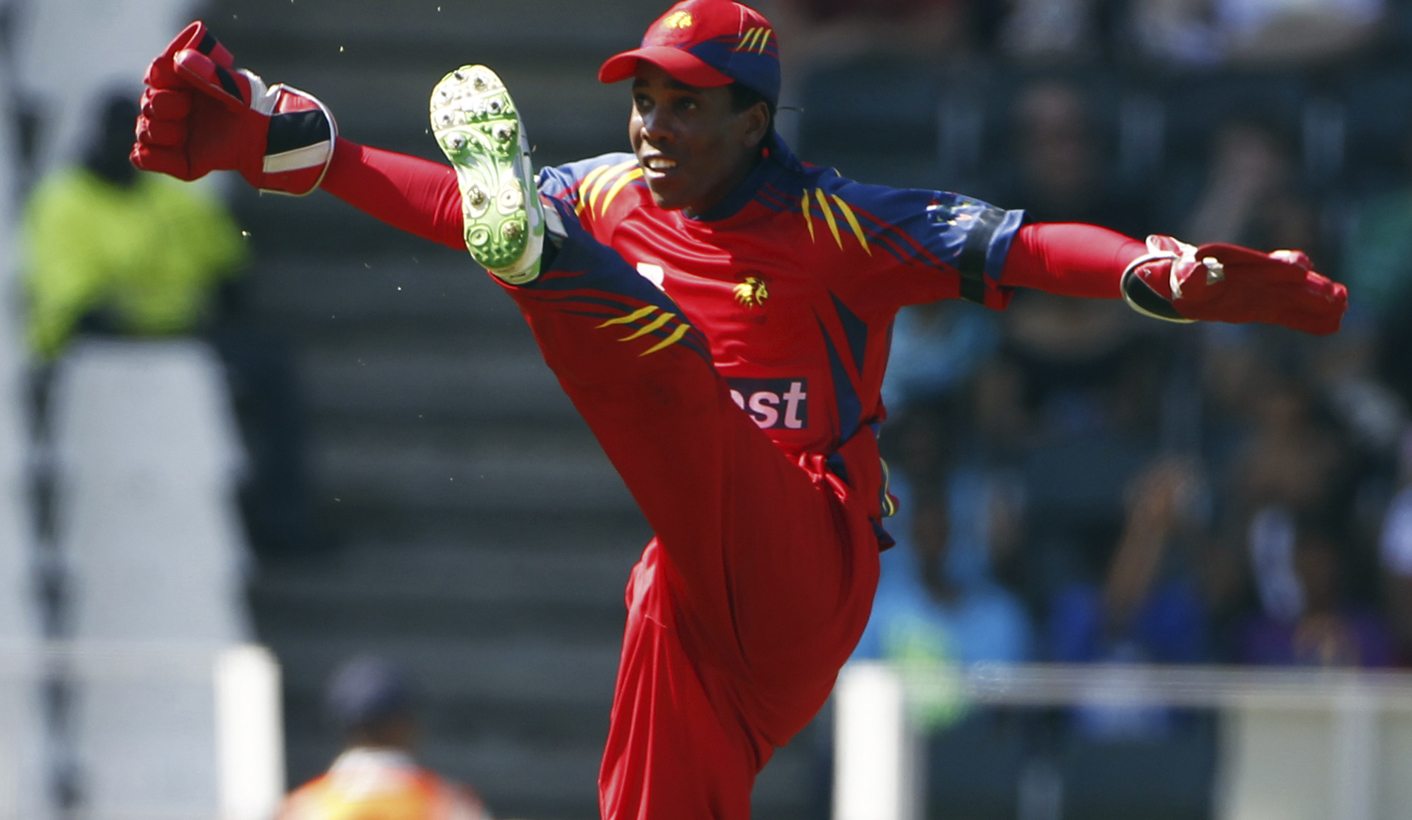 It’s taken the Lions seven years to win a trophy outright, but they’ve finally done it. Under the guidance of new coach Geoffrey Toyana, the Johannesburg franchise has had a superb season. They put the cherry on top with a victory in South Africa’s T20 competition on Sunday. By ANT SIMS.

With a hop and a skip through the Jukskei on a sunny Sunday afternoon, South Africa’s cricket season saw the curtain drop as the Lions were crowned SA’s T20 domestic champions with a 30-run win over the Titans.

It was everything you’d expect from a final: fiercely contested, high-quality entertainment; uncalled-for innuendos from a few select commentators; and the final ball of the match being questioned, leaving the victory in suspense.

With the Indian Premier League in full swing elsewhere in the world, a number of juicy clashes happening in the English Premier league and possibly a few rugby hangovers still being nursed across South Africa, possibly only a select few fans tuned in, but those who did were once again reminded of the strength of the South African domestic set-up as the Lions ended their seven-year wait for winning a trophy outright.

It was also another notch in the belt of Geoffrey Toyana, the young coach who took charge of the Lions at the start of the season. Under his guidance, the Johannesburg franchise finished second in the four-day competition, shared the trophy in the one-day competition and now claimed the honours in the T20 format.

His efforts haven’t gone unnoticed, and Toyana will be in charge of South Africa’s emerging squad to play in a quadrangular T20 tournament in Namibia later this month. The competition will involve the host country, South Africa, Kenya and the Netherlands. It all forms part of a longer strategic plan, where Cricket South Africa is looking to involve franchise coaches at national level to help them gain experience at the highest level.

Toyana has doubtlessly collected an age of experience over the season, in a number of games which most likely left him with his nails a little bit shorter and his hair a shade or two lighter. Sunday was no different: the Lions had to defend just 156, and thanks to some wizardry from Aaron Phangiso and Imran Tahir, they did.

Winning the toss and choosing to bat first, the hosts got off to blitzkrieg start. Quinton de Kock was his usual self – a real domestic bully – hammering a ferocious 44 off 31, after little-known Rassie van der Dussen was dismissed cheaply for 12.

De Kock was unforgiving and once again proved that, at least on the domestic circuit, he has the skill and talent to be one of the most destructive batsmen up front, but his impatience and perhaps immaturity cost him. The youngster eventually succumbed to a full toss from Henry Davids.

It was a reminder that perhaps the young keeper still needs to pay his dues on the domestic circuit a little while longer before he can make the step up to international cricket.

Wickets continued to tumble at regular intervals, and while Neil McKenzie played another fine knock of 39 off 32, nobody else managed to pass 20. The home-side posted what looked like an under-par 155-5 in 20 overs.

The 58-run partnership at the top of the order would prove to be the difference between the two sides, as the Titans simply couldn’t manage the same. While it was Hardus Viljoen who got the initial breakthrough when he had opener Henry Davids caught in the fifth over, it was some crafty spin bowling from Phangiso and Tahir, who picked up four wickets between them, that strangled the Titans. The architects of pressure ensured that the Titans never got ahead, and the extra pressure of the visitors knowing that Albie Morkel would have to bat lower down the order led to their own demise. Morkel twisted his ankle while bowling, and while he did bat, he was nowhere near his destructive best. Even a one-footed Morkel couldn’t save the Titans from their inability to craft an innings, and they succumbed to the clinical approach of their neighbours.

Tensions reached a crescendo as Morkel became the last wicket to fall, but umpires briefly put celebrations on ice to check for a height no ball. The third umpire deemed the delivery legal, and the celebrations started to spill over from the sidelines onto the pitch as a seven-year wait finally came to an end.

The Lions looked like a team, they played like a team and they backed each other up. Part of that culture was most likely instilled by Toyana, and it’s something they’ll have to carry with them when they head to the Champions League T20 later this year. Skipper Alviro Petersen said that the coach had brought a new sense of professionalism to the team and has ensured that there are no short cuts taken when it comes to putting in the hard yards. Under such a champion coach, the Lions are deserving winners, and while it’s all over for the season, it’s almost certainly not over for this generation of star-studded Lions players.

But with the good also comes the sad, and the runners-up had to bid farewell to their coach Matthew Maynard, who decided not to renew his contract with the franchise for personal reasons. He  will return to the UK at the end of the season to take some time off and concentrate on running the Tom Maynard Trust, a foundation set up for his late son.