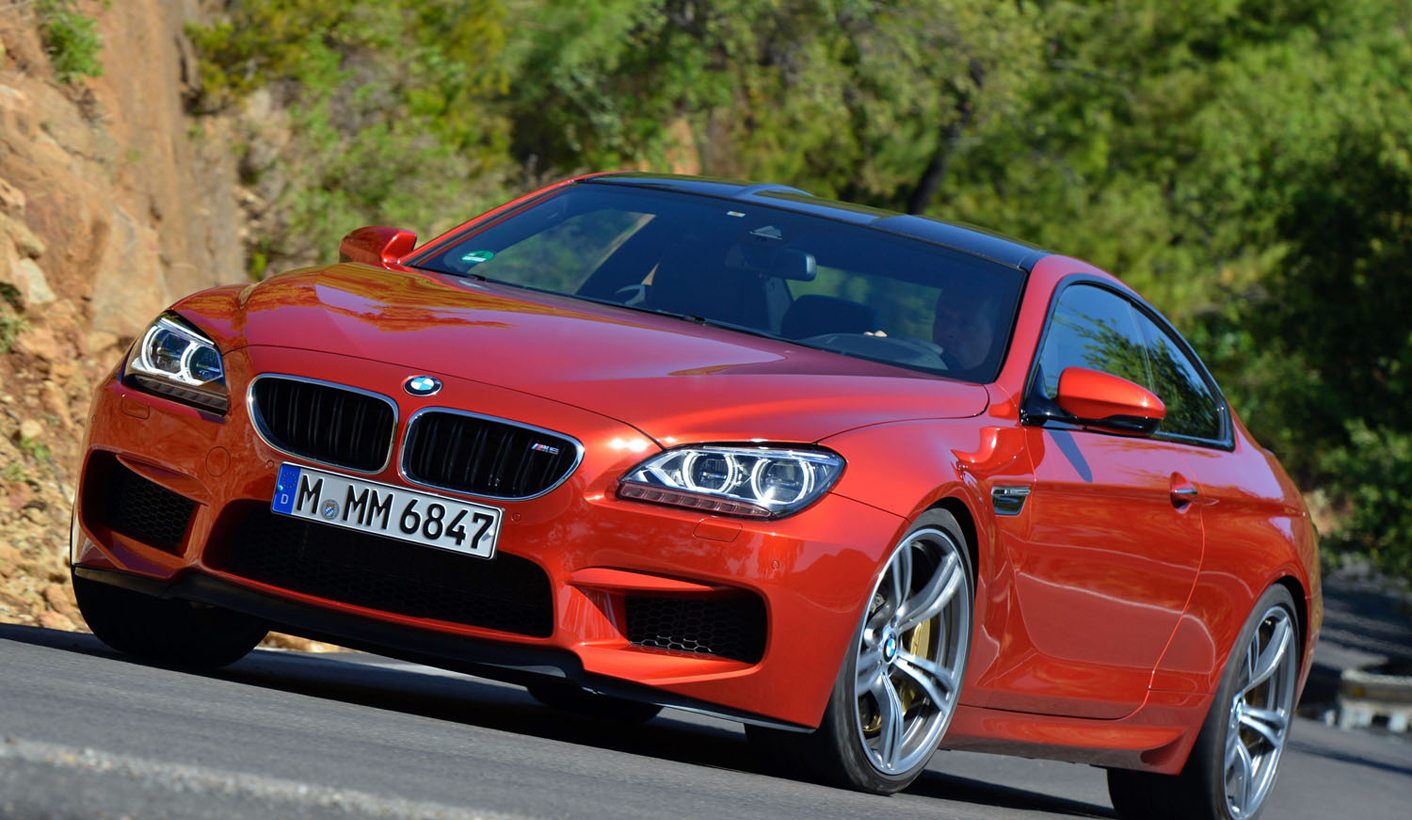 BMW’s M-cars are a breed apart: bespoke and finely fettled versions of production models built in relatively small numbers and created with an unwavering focus on performance. The 6-Series is a large and even cumbersome coupé with room for two, a boot that can swallow two golf bags plus designer DW luggage, and an ability to cruise cross-country with bombastic ease. Does an M-version of this car make sense? By DEON SCHOEMAN.

To call the BMW M6 a sports car is to ignore its size and girth. At almost five metres long and 1,9 metres wide, this is a big two-door – and huge by 2+2 standards. Which begs the question whether a coupé as large and as heavy as this one can also deliver the M-car magic.

I suppose that depends on your definition of a sports car, and the individual’s expectations of what an M-car should provide. M-badged BMWs are typically based on normal, mass-produced models, but are transformed into extremely rapid, highly athletic performance machines capable of embarrassing far more fancied, pure-bred sports cars.

No other M-car epitomises this ability better than the M3. Over three successive generations, the M3 has flown the M-car flag by delivering a motoring experience as intense as any pedigreed sports car, despite a shape not that much different from its mainstream production car origins.

It’s never been an easy car to pilot – but then, real performance cars never are. Owning a thoroughbred sports car is less about owning it, and more about being challenged to explore its hopefully lofty dynamic capabilities.

Even the most recent, and most sophisticated, M3 was the kind of car that could catch out the unwary (or untalented) driver to sphincter-loosening effect…

So, what does all of this have to do with the BMW M6? Well, let’s put it this way: does the world need an M6? And if it does, who would buy such a car?

Let’s start this discussion by considering where the normal 6-Series fits in. As I’ve already pointed out, it’s a big and ostentatious coupé, employing a lot of sheet metal, plus a long list of luxury and convenience features, purely for the benefit of two people.

Yes, I know: those barn-sized doors open wide enough to allow the brave and agile to squeeze past the front armchairs and wedge themselves into the sculpted rear seating positions. But really, they’re best left vacant, or if need be, occupied by pre-schoolers.

And frankly, the typical 6-Series buyer is likely to be young, ambitious, single and wealthy … or a mature, wealthy empty-nester. Either way, 6-Series drivers will be drawn to the car because of the combination of space, comfort and pace it offers. But will they really need the dynamic transformation the upgrade to M-specification entails?

Put it this way: at constant cruising speeds on the open road, there would be very little need to spend the extra R200k or so separating a 650i from an M6. In fact, the “lesser” 650i may in fact be the smoother, more docile, more user-friendly offering.

For committed enthusiasts, or those with a motorsport trophy cupboard filled to the brim with silverware back home, the appeal of the M6 will rely very much on accepting that challenge. For most lesser mortals, the effect will be … intimidating, even downright scary.

So, let’s examine just what the M6 has to offer. Like the much more practical M5 sedan, the two-door is powered by a 4.4-litre V8. The twin-turbo unit may be a version of the same powerplant under the bonnet of the 650i, but it has been completely re-engineered to provide the kind of muscle only exotics with stratospheric price tags can muster.

Thus, the surprisingly compact V8 now pumps out a prodigious power maximum of 412kW, coupled to an equally mind-numbing 680Nm torque peak. That’s enough urge to make even a flabby coupé go like the clappers: 223kW/ton is the kind of power-to-weight ratio usually associated with the supercar league.

But sports cars don’t rely on muscle alone. In fact, without the underpinnings to actually apply all that power, the M6 would be a lost cause. And thus, perhaps the most impressive aspect of the coupé, and also by far the most important differentiating factor when compared to the 650i, is the chassis and suspension.

Adaptive air suspension allows the damping of the car to be fine-tuned in three steps. A so-called active differential benefits tracking by varying the power between the two rear wheels, limiting wheel spin and boosting traction – after all, the M6 is a rear-wheel drive car.

The level of assistance for the variable-ratio power steering can also be adapted to suit personal preference and driving conditions. And just how swift and incisive the gear changes are, can also be changed at the push of a button.

Talking of gearboxes, the M6 gets the same seven-speed dual-clutch gearbox as the M5. Dubbed M-DCT, the motorsport-tweaked, paddle-activated transmission feels more race car than road coupé, thanks to a short, sharp and ultra-quick change action that seems too rapid-fire and percussive to be road-legal.

Add massive brakes, with the kind of stopping power good enough to halt a Boeing, as well as huge, lightweight alloy wheels with sticky, specially designed tyres, and the M6 picture becomes a little clearer: yes, it may not look all that different at first glance, but what’s under the body is an altogether different issue.

Have I mentioned that the M6 is also significantly lighter than the more mundane Sixes, thanks to a weight-loss regimen that includes using a carbon fibre-reinforced roof, composite front fenders, and doors and a bonnet fashioned from lightweight aluminium?

Even armed with all that knowledge the sheer get up and go of the M6 comes as a real surprise. It’s best to gently lean on the loud pedal at first – at least until you get used to the crisp edge of the throttle, and the way the big BM catapults itself off the line.

With speed building in an urgent drum roll of acceleration, the snappy gear changes are a blessing, allowing precise, incisive cog swaps in a less time than the blink of an eye. And this is where things get interesting: even in full cry, the M6 feels too easy, too effortless.

It’s an illusion that’s very abruptly shattered when you have to brake, or turn. Newton’s laws of gravity are suddenly brought into sharp and even dreadful focus as the big car’s mass becomes apparent. Those beefy brakes become lifesavers, as does the sheer competence of the chassis – but the experience will unequivocally expose any shortcomings on the driver’s side.

Those with the courage and the experience to explore the M6’s capabilities will find it gloriously agile and responsive, with a devastating midrange grunt, and the ability to carve through a series of corners with slick and fluid precision.

But nothing, not even the M-chassis, can disguise the inertia of the car’s mass, and then faster the pace, the more apparent its bulk becomes – a reminder that the M6’s heritage is rooted in grand tourer tradition, rather than blue-blooded sports car heritage.

The stats make for impressive reading; 0-100km/h in 4.2 seconds, a top speed limited to 250km/h, but capable of reaching 305km/h if ordered with the optional M Driver package.

However, BMW’s assertion that the M6 is also relatively economical is difficult to take seriously: I’m sure the claimed 9.9 litres/100km/h in mixed driving conditions is attainable, but nobody who’s paid good money for this car is going to drive with economy run-style circumspection. Expect 16 to 17l/100km.

The M6 exists because it demonstrates just how effective that M-division magic wand really is. However, its girth, its presence and its weight all mitigate against the M-transformation.

If we accept that the 6-Series shines brightest in a grand tourer, cross-country role, then adding the M-treatments extra verve and dynamics does more harm than good. In other words, too much of a good thing becomes too much.

Yes, in pure performance terms, it can run with the big guns from much more exotic marques. And in that context, the R1,4-million asking price represents decent value. But I prefer my M-cars more compact, more nimble, and more involving. Bring on the next-gen M3 – or should I say, the new M4? DM