The Brics Summit ends… but where’s the bang? 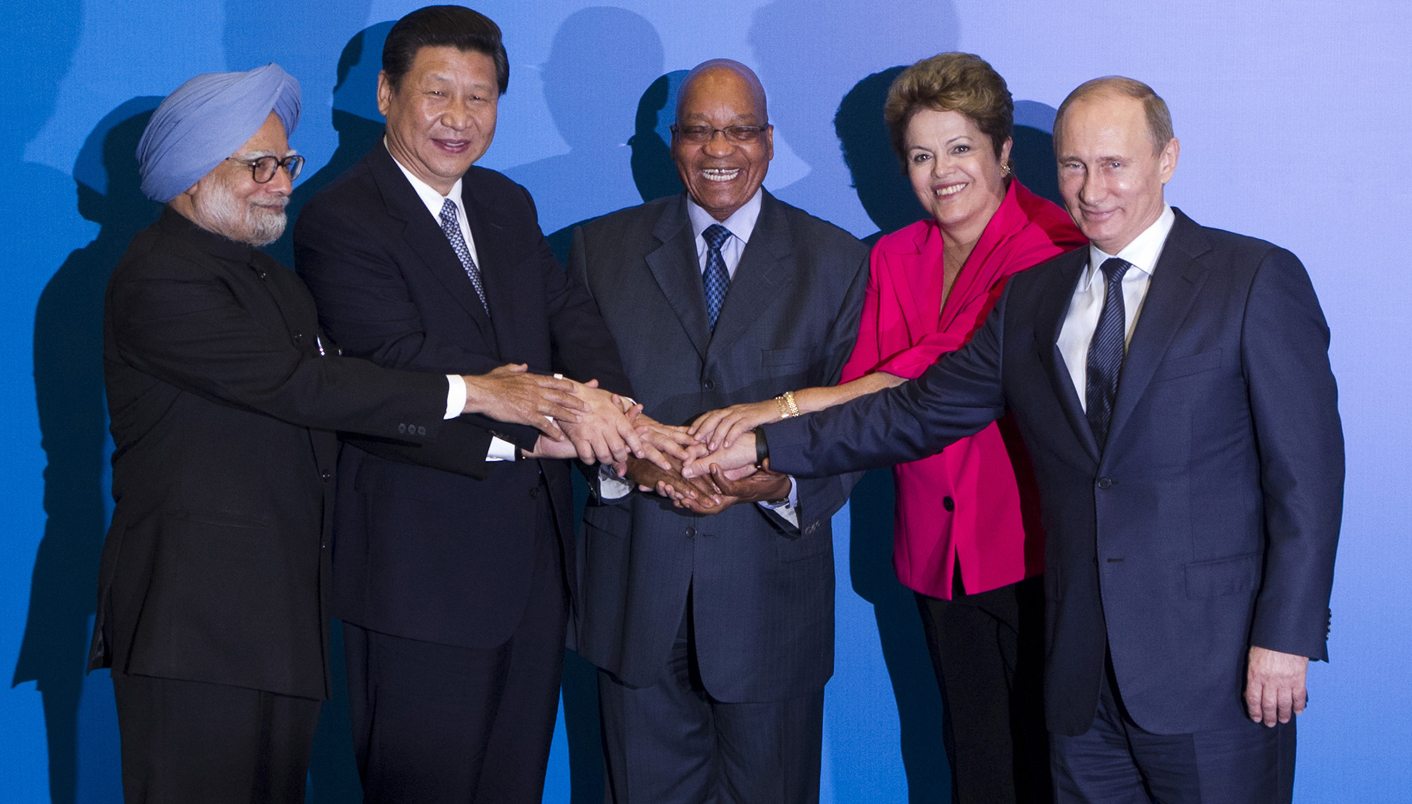 By the time the five-leader Brics summit had effectively come to its close, the news out of the meetings had already gone through virtually a full cycle of growing, unrealistic expectations, on through to deflated trial balloons, and then finally to a grudging sense that at fortunately they pretty much ended on the same page. In fact, that’s just about all there was – the same one-pager of an outline for future developments. Kind of a “watch this space” type of announcement, rather than a detailed road map. By J BROOKS SPECTOR.

So what has been achieved? In one sense the biggest achievement has simply been the fact that this collection of five emerging market economies – China, Russia, India, Brazil, and South Africa that together represent a major chunk of the world’s population and a significant amount of the global economy and a rising share of its trade – agreed, at least in principle, to aim for concrete results down the road. The key, of course, is when all of these ideas begin to take shape and real meaning.

Announced before the summit had actually begun was agreement of a Brics coalition of think tanks to tackle issues of joint, mutual interest. In South Africa, the lead will reside with the government’s Human Science Research Council, however, rather than with any of the country’s more independent non-governmental research institutions. Regardless, handled properly, this kind of link-up could conceivably contribute to improved data collection analysis on comparative economic circumstances. There is also a Brics academic council to do whatever it is multilateral councils do.

Additionally, the Brics business council, also announced before the actual summit, was formally launched with announcement of the various national committees that will participate. South Africa’s committee chair is the almost inevitable choice of mining magnate Patrice Motsepe. The idea here is that the whole body will convene twice yearly “to ensure synergy in our respective endeavours” – again whatever that means precisely.

Then there is the Brics contingent reserve agreement that once funds are formally pledged or deposited and proper mechanisms are defined, established and caused to come into being will do about the same thing as one of the key functions of the IMF. The key here seems to be to wriggle out from under the wing of that sometimes-maligned Bretton Woods institution that effectively is the window of last resort to cope with currency mood swings and runs on exchange rates. All the concrete decisions on this front remain to be ironed out in the future, however.

The final part of this Brics heads-of-state meeting in Durban was the so-called Brics bank. The idea seems to be that national infrastructure spending – and particularly infrastructure spending that transcends a single African state ­– is a real opportunity for a international development bank guided and funded by the five Brics nations in cooperation with each other. If the World Bank and other similar institutions insist on strict accountability and adherence to the conditionalities of that Washington consensus, then a new financial institution that focuses more on job creation-style infrastructure development represents an opportunity and an opening for the grouping.

It seems, however, that the intention was conflated with its creation in the minds of some of its sponsors and this enthusiasm was buoyed even further in the media by reports that Finance Minister Pravin Gordhan had, speaking of the deal, said, “that it’s done!” By the time the summit had gone into its second day, however, Gordhan had moved on to more restrained comments to reporters, saying that such a bank was both “feasible” and “viable”.

At the final plenary session, Jacob Zuma told the gathering: “In terms of our earlier deliberations, we have decided to enter formal negotiations to establish a Brics-led new development ank based on our own considerable infrastructure needs, which amounts to around $4,5 trillion over the next five years, but also to cooperate with other emerging markets and developing countries in future.”

But the plan for this bank will still need an enormous amount of work to flesh out this vision – just for starters on everything from where it will operate from, how it is going to be managed, who will fund it and how voting shares will relate to funding. As such, the operations manual remains pretty much a one-page memorandum with blank spaces where all the key verbs need to go.

And so, rather than announcing that doors were open and lending windows were open for business, the leaders’ more tentatively phrased joint statement read: “In March 2012 we directed our finance ministers to examine the feasibility and viability of setting up a new development bank for mobilising resources for infrastructure and sustainable development projects in Brics and other emerging economies and developing countries, to supplement the existing efforts of multilateral and regional financial institutions for global growth and development. Following the report from our finance ministers, we are satisfied that the establishment of a new development bank is feasible and viable. We have agreed to establish the new development bank. The initial capital contribution to the bank should be substantial and sufficient for the bank to be effective in financing infrastructure.”

Indeed, the strong talk about greatly strengthening trade and investment links between the five nations has run into some hard truths about the realities of current financial flows. As the New York Times commented the other day, “The developing countries in the bloc hardly invest in one another, preferring their neighbours and the developed world’s major economies, according to a report released Monday by the United Nations Conference on Trade and Development. Just 2.5% of foreign investment by Brics countries goes to other countries in the group, the report said, while more than 40% of their foreign investment goes to the developed world’s largest economies, the European Union, the United States and Japan. Africa, home to several of the world’s fastest-growing economies, drew less than 5% of total investment from Brics nations, the report said. France and the US still have the highest rate of foreign investment in Africa. Despite China’s reputation for heavy investment in Africa, Malaysia has actually invested $2 billion more in Africa than China has.”

As a result, a crucial task for the grouping – even more than creating brand new, purpose-built financial institutions for its group – seems to be finding ways to put real heft onto the outlines of their international economic ties. This is paralleled by the group’s inability so far to find political positions it can jointly espouse, beyond more anodyne expressions of support for democracy, independence, freedom of national decision-making and freedom from outside interference from other meddling nations – whatever those kinds of things may mean to individual members in practice.

As a consequence, their joint communiqué avoided much more than a plea for peace in Syria, even though the International Civil Society Coalition active on Syria, said it had welcomed the Brics communiqué’s “call for all parties in Syria” to “allow and facilitate immediate, safe, full and unimpeded access to humanitarian organisations to all in need of assistance”.

The coalition went on to plead that to make such a call “meaningful for suffering Syrian civilians, Brics states must now press the Syrian government to address the greatest barrier to that access by allowing the UN to cross Syria’s  border with Turkey to assist people in need in opposition-held areas. The test of the Brics’ resolve will be whether or not Assad grants immediate permission to the UN to cross Syria’s borders to meet the escalating needs.”

After the five-nation meeting, the heads of government were whisked off to the plush Zimbali resort north of Durban, along the Indian Ocean coast. They were there for a meeting with 15 African heads of state who had joined for this “after party”, along with representatives of various African regional economic groupings, all for an opportunity to talk about how Brics’ financial clout could assist African economic needs. In this Brics was taking a leaf out of the G-7/G-8 meetings of the world’s leading economic powers that has, over time, added countries at the margins at their various meetings – a format that has become formalised into the G-20 gathering instead of the smaller, more intimate grouping.

While all of these meetings and statements were happening, there was also an exhibition of economic and development agencies, corporations involved in financial affairs, and even representatives of the Square Kilometre Array – all eager to tout their efforts. Among the exhibitors were financial risk analysis and audit firms. Speaking with the people at that booth, the writer ended up speaking with one staffer who was responsible for, perhaps inevitably, risk and investment advisory services for Chinese investment and trade with Africa. The individual just happened to have been a research cardiologist in a previous career and so the writer got a promise of a more thorough briefing on Chinese investment trends in Africa over a good meal, as well as advice on new Chinese restaurants in Johannesburg – and a quick consultation on diabetes-related dietary issues. Now who says there is no such thing as a free lunch? DM