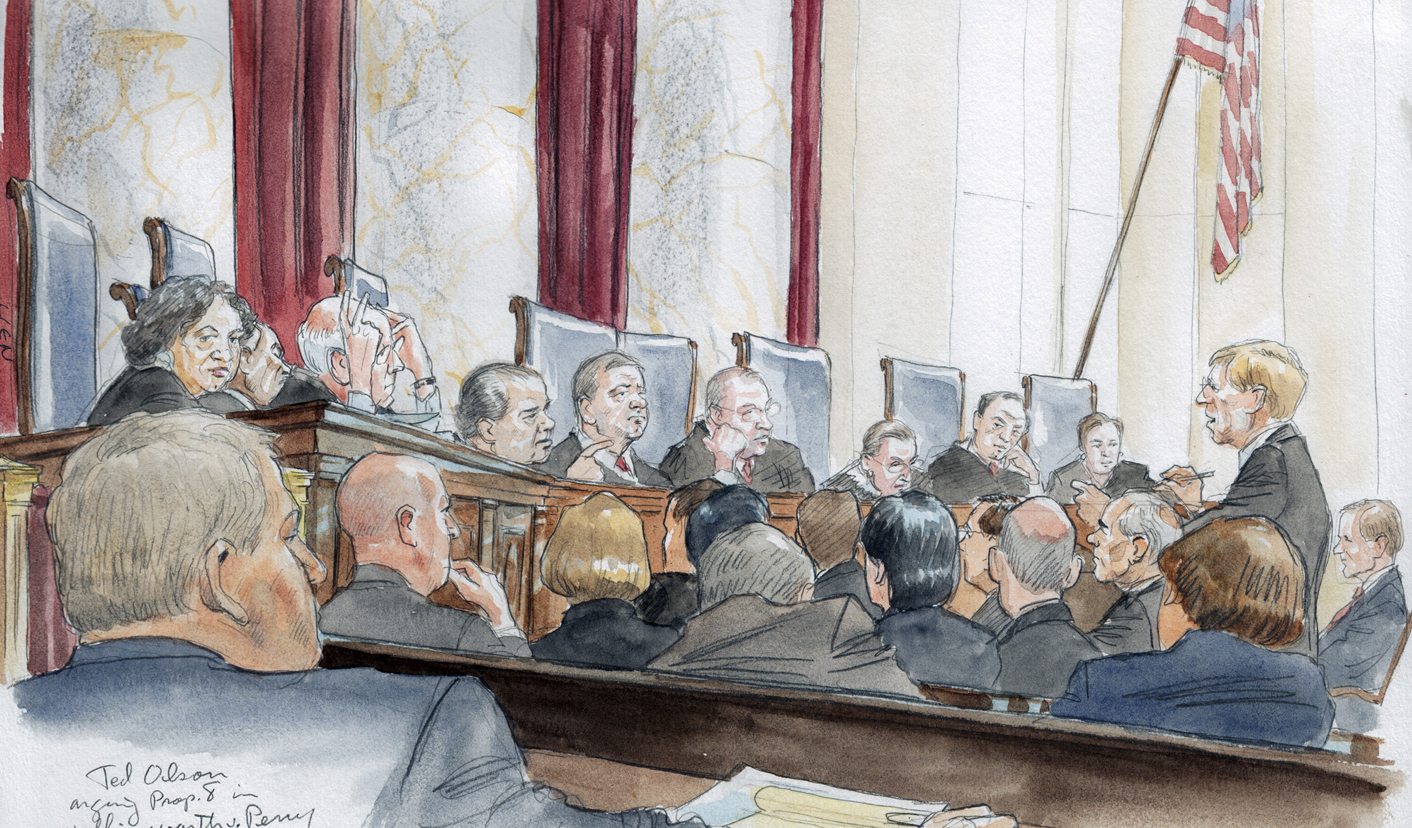 The U.S. Supreme Court signaled reluctance on Tuesday to rule broadly on the question of the right to marriage for gays and lesbians as the justices heard arguments on same-sex marriage for the first time. By Lawrence Hurley and David Ingram.

As thousands of demonstrators on both sides of America’s long-standing gay rights divide rallied outside, the court heard a spirited, 80-minute oral argument on whether to let stand a California ban on same-sex marriage.

Despite the case being one of the most eagerly anticipated legal showdowns of the year, some of the nine justices showed an unwillingness to dive headfirst into the delicate and divisive issue.

Though polls show growing support among Americans for gay marriage, only nine states recognize it, while 30 states have constitutional amendments prohibiting it.

Justice Anthony Kennedy, a potential swing vote, gave a clear indication of where he stood when he warned of the court entering “uncharted waters.”

It was the first of two days of arguments. On Wednesday, the court will consider the related question of whether the 1996 federal Defense of Marriage Act (DOMA), which denies federal benefits to married same-sex couples, should be struck down.

Rulings in both cases are not expected until June.

In making his antipathy to a broad ruling clear, Kennedy even raised the prospect of the court dismissing the case altogether, a relatively unusual move that would leave intact a federal appeals court ruling that had earlier struck down the California law, known as Proposition 8.

If dismissal were the outcome of the Supreme Court’s consideration of Proposition 8, gay marriages in California could proceed, but the case would have no impact on other states, as gay rights activists had hoped. It would also mean that the high court could stay silent on the issue, at least in the short term.

Kennedy was not the only one with reservations. Justice Samuel Alito also urged caution, noting that gay marriage, as a concept, is “newer than cellphones and the Internet.”

None of the justices indicated support for the Obama administration’s compromise solution, which would strike down Proposition 8 and require the eight other states that already recognize civil unions or domestic partnerships to allow gays and lesbians to marry.

Outside the court, demonstrators did not share the justices’ reluctance to take a clear stand, with hundreds gathered representing both sides. Anti-gay marriage protesters marched past the imposing Supreme Court building accompanied by police on motorcycles, drawing jeers and shouts from a pro-gay marriage rally, but there were no physical confrontations.

“No hate – we just disagree!” yelled one marcher, holding a sign that proclaimed children do best with a mother and father.

Jay Golon, a New York City educator who was at the pro-gay marriage rally, said he has many students with same-sex parents.

Inside the hushed courtroom, filled to capacity with lawyers and spectators, some of whom had waited for days to get a seat, it quickly became apparent that the justices were more interested in legal technicalities than flowery rhetoric.

One key issue is whether California opponents of gay marriage even had a right to be heard in federal court.

If the court were to find the proponents did not have standing, then it would not reach the merits of that case. That would mean that an earlier federal district court ruling that struck down Proposition 8 would be left intact. Further litigation would ensue over whether the district court rule would apply statewide.

U.S. citizens, in general, do not have a right to sue to enforce laws they favor. Chief Justice John Roberts pressed lawyer Charles Cooper, who represents gay marriage opponents, on why his clients are any different as they seek to enforce Proposition 8.

“I don’t think we’ve ever allowed anything like that,” Roberts said.

On the broader question of same-sex marriage, pressed by attorney Theodore Olson on behalf of two California same-sex couples, some conservative justices seemed eager to raise objections to the court making a definitive statement, citing a lack of scientific data on same-sex couples raising children.

Justice Antonin Scalia said there is “considerable disagreement” about whether gays and lesbians should be able to raise children.

Kennedy agreed that there is “substance to the point that sociological information is new.”

On the liberal wing, justices probed Cooper on his assertion that the government’s interest in promoting procreation is a primary reason for limiting the definition of marriage.

Both Justice Elena Kagan and Justice Stephen Breyer questioned Cooper on how his definition of marriage squares with the fact that infertile opposite-sex couples can marry.

“There are lots of people who get married who can’t have children,” Breyer said.

The court will reconvene on Wednesday morning to weigh the DOMA statute.

Unlike Proposition 8, that case does not give the court the opportunity to issue a broad ruling for or against gay marriage because the case relates only to a federal law that limits the definition of marriage to opposite-sex couples for the purposes of federal benefits. DM

Photo: Attorney Ted Olson argues in front of the U.S. Supreme Court about California’s Proposition 8 in Washington, March 26, 2013. U.S. Supreme Court justices signaled on Tuesday that they are reluctant to embrace a broad ruling finding a fundamental right to marriage for gays and lesbians across the United States. REUTERS/Art Lien