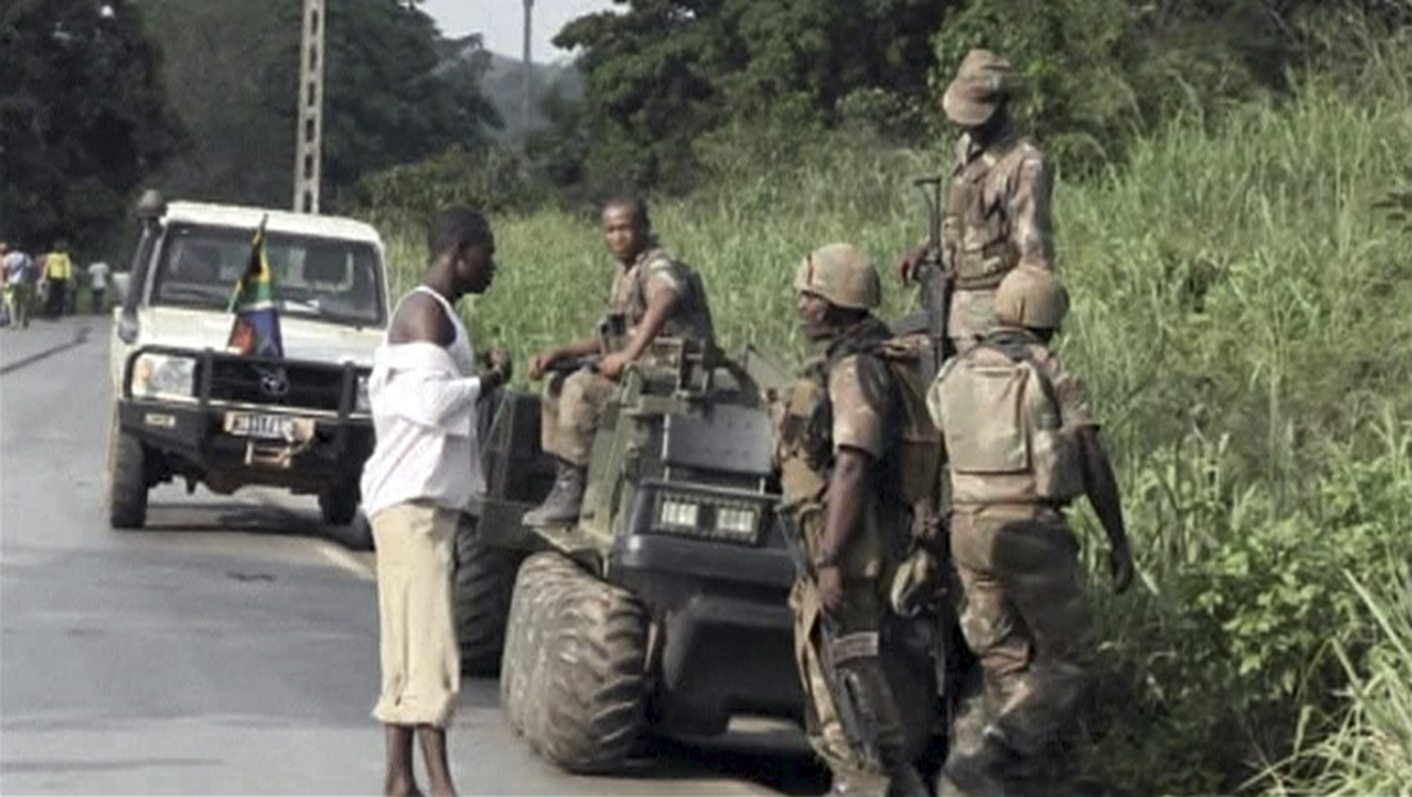 South Africa’s beleaguered troops in the Central African Republic are looking to catch the next flight out of Bangui. Defeated in combat and resented by the rebels who have taken over the country, they have already lost at least six of their colleagues. And to what end? By KHADIJA PATEL.

It’s been a weekend of great turmoil in the Central African Republic. President Francois Bozize fled the capital to the neighbouring Democratic Republic of Congo; rebels have control of the presidential palace, the public broadcaster and other state institutions; and up to ten South African soldiers have been killed.

Spokesperson for the South African National Defence Force, Brigadier General Xolani Mabanga, said the armed forces could not confirm the number of South African casualties in the battle for control of the capital, Bangui. “We are not yet in a position to say how many troops we have lost and how many were injured,” he said, adding that SANDF was still verifying the information it had received, assessing the situation and informing the next of kin of the deceased troops.

In the clashes that ensued, at least six South Africans are said to have been killed.

“I saw the bodies of six South African soldiers. They had all been shot,” a Reuters witness said. Later, he said he saw three more bodies in burned-out South African military vehicles. Still other reports put the number of South Africans dead at ten.

The number of dead is a lesser detail of a greater, more heinous fact that South African lives were lost in combat; analysts say South Africa’s reaction to the ousting of Bozize and the killing of troops will be crucial to determining what happens from this point.

Mabanga said it was too early to tell what South Africa’s reaction would be or if indeed the troops would remain in Bangui now that Bozize, who was an ally of South Africa, had been ousted.

The troops themselves seem to have little inclination to continue their stay in Bangui.

United Nations sources have reported that the South African troops are looking for safe passage to the airport. “They took substantial losses and have asked for French support to load their troops and take off,” one UN source told Reuters.

“The employment of members of the SANDF to CAR is one of the efforts that South Africa is making to bring about peace and stability in the region,” the presidency said in a statement in January this year.

At a press conference organised by the Department of International Relations and Co-Operation in late January, deputy minister Ebrahim Ebrahim  contradicted the presidency’s explanation of the deployment of South African troops to the Central African Republic.

The presidency said, “The employed members of the SANDF will assist with capacity building of the CAR Defence Force and will also assist CAR with the planning and implementation of the disarmament, demobilisation and re integration processes.”

Ebrahim explained that South Africa’s deployment of 200-odd troops to bolster the South African military presence in CAR stems from an agreement dating back to 2007. South Africa had agreed then to assist the CAR with military training and offer protection to Bozize.

“We have assets there that need protection,” Ebrahim said, without further explaining what exactly those assets were that rendered it necessary to send yet more troops to a country embroiled in conflict.

“The point is: government is very weak, the country is very poor,” Ebrahim admitted.

He added, however, that the Central African Republic was richly endowed with mineral resources and South Africa sought to ‘assist CAR’ to benefit from its mineral wealth.

The move to bolster the South African military presence in the Central African Republic in the face of a rebel insurgency was interpreted in some quarters as a move to assert dominance over a weak African state. Ebrahim insisted that South Africa harboured no hegemonic intentions over the rest of the continent. “There is no intention for us to try to boost our profile,” he said.

And yet President Zuma refused repeated requests from rebels negotiating peace with Bozize for South Africa to withdraw its forces from Central African Republic. Certainly Bozize had faced several requests for him to ask South African forces to leave. Last week, he was asked to free political prisoners, integrate the rebels into the country’s armed forces, and ask the South Africans to leave.

He chose to cling to the South African forces for protection.

How, then, did the good people driving our foreign policy get it so wrong that they backed Bozize to the point of risking the lives of South Africans? It was clear as far as back as December last year that Bozize’s regime was in serious trouble. The rebels were busy closing in and in January his regional partners did the unthinkable, forcing him to accept a deal with the rebels.

Rebels insist Bozize had not implemented the details of that deal.

Was our government aware of Bozize’s apparent lack of implementation of the agreement he had reached with rebels in January? Or were we oblivious to those facts?

The South African National Defence Force Union certainly does not believe South African troops should have been in Bangui this weekend. In a statement released on Sunday night, the union lambasted government for supporting a regime “notorious for its corruption, nepotism and maladministration”. The union’s general secretary JG Greef said in the statement that South African troops ought to have been withdrawn from the Central African Republic as soon as it became apparent that Bozize was not honouring the January agreement.

“The President of South Africa, Jacob Zuma, should have withdrawn our troops at the very moment Bozize dishonoured his obligations in this respect,” he says.

And yet the troops are still in Central African Republic.

“Now that Bozize has jumped ship like a coward, our troops are left in his mismanaged capital, under-staffed and under-equipped against the onslaught of rebels who by far outnumber and outgun our soldiers,” Greef says.

Outgunned, outnumbered, poorly trained and stuck in the middle of a situation in which they should not have been in the first place.

“President Zuma is called upon to withdraw our troops with immediate effect, even if it entails launching a military offence to relieve our troops in distress.” DM

Photo: Armed South African soldiers chat with a man in Begoua, 17 km (10 miles) from capital Bangui, in this still image taken from video, March 23, 2013. Rebels in Central African Republic seized control of the riverside capital Bangui after fierce fighting on Sunday, forcing President Francois Bozize to flee and raising fears of instability in the mineral-rich heart of Africa. REUTERS/Reuters TV