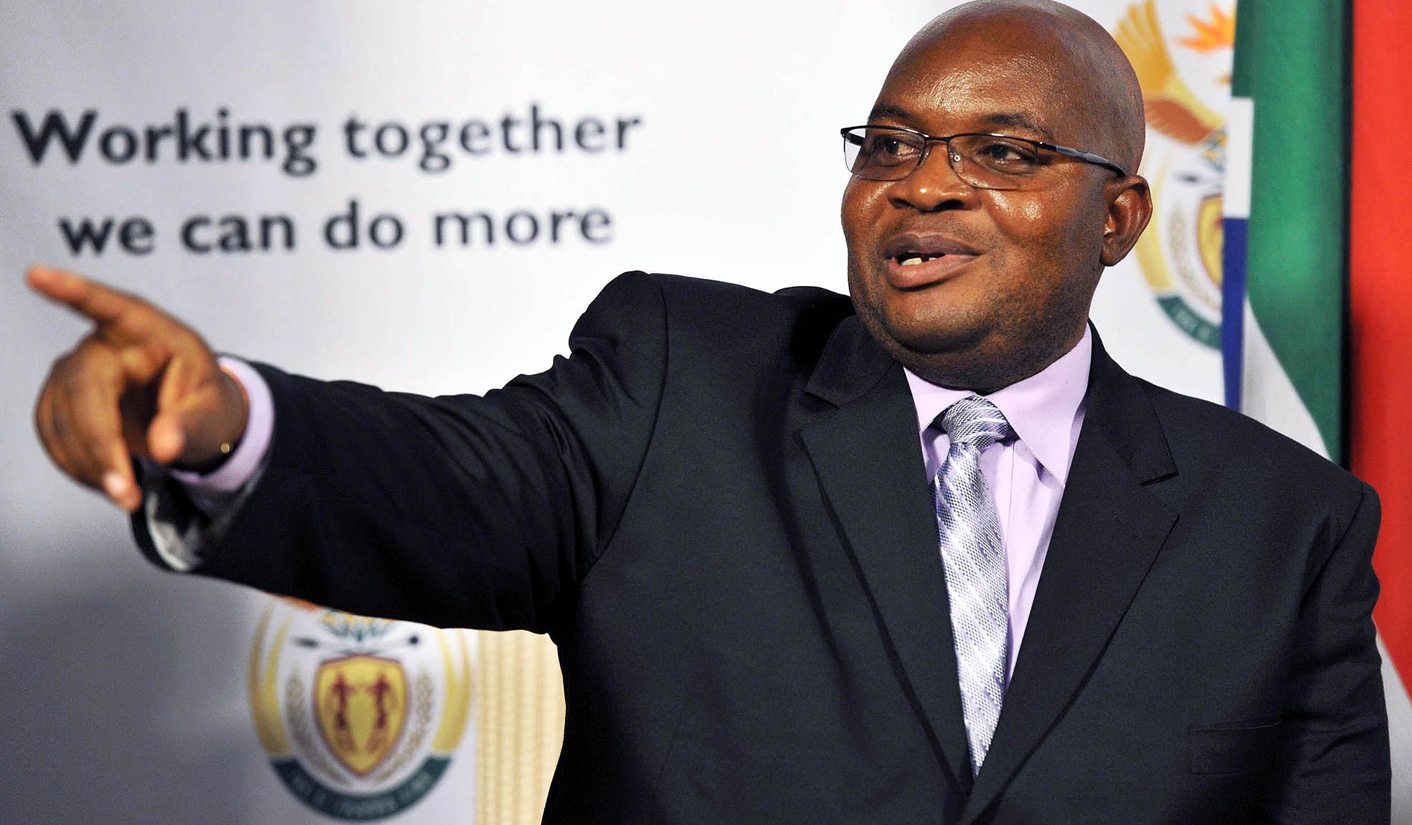 First there was silence, then denial... Finally, Minister of Cooperative Governance and Traditional Affairs Richard Baloyi has taken ownership of the Mvula Trust scandal and what it says about government’s multi-billion rand Community Work Programme. There’s now a full-scale investigation, big promises and, for good measure, a bit of Shakespeare. By ALEX ELISEEV.

It took almost two months and a PR disaster, but cooperative governance and traditional affairs minister, Richard Baloyi, has finally broken his silence. And not in the arrogant “I’m not a minister of Mvula Trust?” kind of way, but with some serious undertakings and promises of transparency along the way.

In an exclusive interview, Baloyi revealed that an investigation is now underway into whether any collusion or corruption took place in the Community Work Programme (CWP) and that this may result in criminal charges against those involved in the department. Also, although not willing to cancel any current contracts, Baloyi has also requested an institutional review of the multi-billion rand programme with a view to changing the structure (and hopefully fixing some bureaucratic snags) next time around.

Baloyi has further promised to make the findings of the review and investigation public and has opened his door to Corruption Watch and any other whistleblowers. We’ll monitor whether he stays true to his word and whether this is a minister determined to steer an important and successful programme back on course or a man out to sweep all kinds of damning allegations under the carpet.

For background on the Mvula Trust story, see “Read more” at the end of this article. In essence, the CWP is a major government initiative to provide part-time work for community members. At present, the project has about 170,000 participants. Government has partnered with three NGOs – Mvula Trust, Lima and Teba Development – to channel billions of rand down to those doing the work. The CWP is designed as a “safety net” to catch and offer some employment to the poorest of the poor.

Mvula Trust and the R30-million tender it was awarded was the subject of a four-month Corruption Watch investigation and is now being probed by the police. There are allegations the respected NGO fronted for a private company owned by one of its trustees. The scandal escalated when CWP workers from Randfontein, on the West Rand, took to the streets after not being paid their wages. Workers in central Johannesburg are in a similar fix, saying they can’t afford to eat or pay rent because the money is not filtering down.

Baloyi does not hide from these problems. Interestingly, he says they are not limited to Gauteng and that protests have flared up in several other provinces. He says glitches are being reported across the entire country and all three lead agents (NGOs) have raised various concerns. A meeting was held recently to try and work through some of these issues and the main problem appears to be the long chain of red tape between the wallet (government) and the workers. Each of the NGOs have provincial and local level partners.

Baloyi stresses that despite the problems, the CWP has been highly successful and is being expanded to meet demand. The plan is to see one million people benefit from it in the next few years. He calls the project a “low lying fruit” which must be picked. In other words it’s a fairly simple way (at least in theory) to help out with one of government’s main priorities: fighting unemployment. He says there are ambitious plans on the go, ranging from partnering with academic institutions to teach those employed by the CWP, to teaming up with businesses.

The review will look at how to improve the system and the possibility of getting rid of some of the role players. This would scrub out the pipeline and allow the money to flow better. Baloyi says it will also look at how payments are made; whether the lead agents comply with the terms of their tenders; communication between them and the department; and whether money is being lost or stolen along the way (through ghost workers/projects).

The promise is that the investigation will “dig to the bone” of the CWP programme and incorporate the concerns raised by Corruption Watch.

Baloyi says the reason his department has remained so quiet (and has not replied to Corruption Watch since December) is that it doesn’t want to alert anyone that may be involved. In other words: silence and stealth.

“Better look like a flower but let there be a serpent underneath it,” he says, quoting Shakespeare’s Macbeth. “The serpent is a very dangerous snake.”

That still doesn’t explain why the department could not let Corruption Watch know (privately) that it information was in good hands but Baloyi says his door is now open. The minister says the investigation will examine everything, including who in the department awarded the Mvula tender.

Despite warnings from municipalities that anger from unpaid workers could escalate into a full-blown crisis, Baloyi denies that is where the CWP is heading. He tries to pull the focus away from Mvula and to the wider programme, which he believes is in need of some surgery, but not a quadruple bypass.

His comments are a step in the right direction. They are better than storming off from an interview or passing the buck. Our hope is that he’s not underestimating the problems besetting the CWP. If one looks at the situation at Mvula, the country-wide protests and the concerns raised by Corruption Watch about all other tenders awarded, it seems that – to borrow from Macbeth again – what is fair may well be foul. Baloyi and his investigation need to cut deep, look under the skin and be brave enough to chop out any cancers. Nothing less than the health and life of the Community Work Programme is at stake. DM