Cyprus In Last Ditch EU Talks To Save Economy 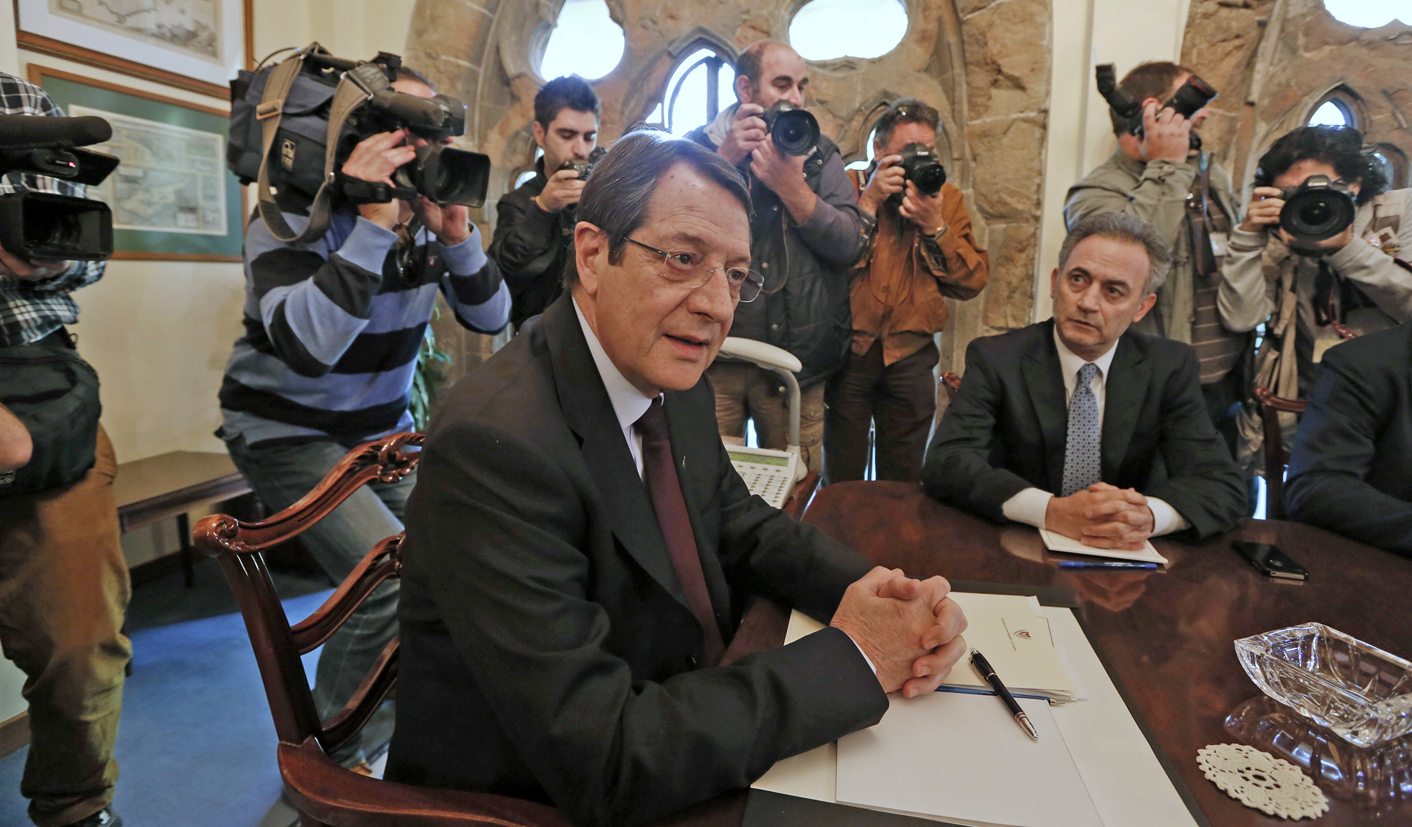 Cypriot President Nicos Anastasiades held last-minute talks with international lenders on Sunday in an attempt to save the Mediterranean island from financial meltdown and possibly becoming the first country to leave the euro zone. By Michele Kambas and Annika Breidthardt.

With Cyprus facing a Monday deadline to avert a collapse of its banking system, Anastasiades met the heads of the European Union, the European Central Bank and the International Monetary Fund to try to craft a deal on a 10 billion euro ($13 billion)bailout after a first attempt collapsed last week.

His government and Cypriot political parties remain divided, and late night talks in Nicosia broke up without a result after angry bank workers demonstrated to save their jobs.

Anastasiades flew to Brussels in a private jet sent by the European Commission ahead of a crunch meeting of euro zone finance ministers, which was put back to 8 p.m. (1900 GMT).

The key unresolved issues were how Cyprus should raise 5.8 billion euros from its banking sector towards its financial rescue, and how to restructure the island’s overgrown banks.

The president and his team have a “very difficult task to accomplish to save the Cypriot economy and avert a disorderly default,” a Cypriot government spokesman said.

The EU’s economic affairs chief Olli Rehn said there were no good options but “only hard choices left” for the latest casualty of the euro zone crisis. With banks closed for the last week, the Central Bank of Cyprus imposed a 100-euros per day limit on withdrawals from cash machines at the two biggest banks to avert a run.

French Finance Minister Pierre Moscovici rejected charges that the EU had brought Cypriots to their knees, saying it was the island’s business model as an offshore financial centre that had failed.

“To all those who say that we are strangling an entire people … Cyprus is a casino economy that was on the brink of bankruptcy,” he told Canal Plus television.

Analysts say failure to clinch a deal could cause a wider financial market selloff, but some say the island’s small size – it accounts for just 0.2 percent of the euro zone’s economic output – means that contagion would be limited.

German Finance Minister Wolfgang Schaeuble said there had been little progress since last weekend’s attempted bailout deal involving a levy on all bank deposits, which the Cypriot parliament overwhelmingly rejected, but he hoped people in Cyprus now had “a somewhat realistic view of the situation”.

Schaeuble said the financial numbers had got worse, if anything, in the intervening week of uncertainty. Asked what a solution would look like, he said: “What we agreed last week.”

A French government source said French President Francois Hollande and German Chancellor Angela Merkel were being briefed on the talks and were on standby if needed.

The levy on bank deposits represents an unprecedented step in Europe’s handling of a debt crisis that has spread from Greece, to Ireland, Portugal, Spain and Italy.

In the Cypriot capital, Nicosia, the mood was anxious.

“I haven’t felt so uncertain about the future since I was 13 and Cyprus was invaded,” said Dora Giorgali, 53, a nursery teacher who lost her job two years ago when the school she worked at closed down.

“I have two children studying abroad and I tell them not to return to Cyprus. Imagine a mother saying that,” she said in a central Nicosia square. “I think a solution will be found tonight but it won’t be in the best interests of our country.”

Cyprus’s banking sector, with assets eight times the size of its economy, has been crippled by exposure to crisis-hit Greece.

Without a deal by the end of Monday, the ECB says it will cut off emergency funds to the banks, spelling certain collapse and potentially pushing the country out of the euro.

Conservative leader Anastasiades, barely a month in the job and wrestling with Cyprus’ worst crisis since a 1974 invasion by Turkish forces split the island in two, has been forced to back down on his efforts to shield big account holders.

“Negotiations continue. We are doing our utmost for #Cyprus,” he tweeted from Brussels.

Scrambling to find the funds, officials said Cyprus had conceded to a one-time levy on bank deposits over 100,000 euros, a dramatic U-turn from five days ago when lawmakers threw out a similar proposal as “bank robbery”.

A senior Cypriot official said Nicosia had agreed with its lenders on a 20 percent levy on deposits of more than 100,000 euros at the island’s largest lender, Bank of Cyprus, and four percent on deposits above that level at other banks.

Anticipating a run on banks when they reopen on Tuesday, parliament has given the government powers to impose capital controls.

About 200 Cypriot bank employees protested outside the presidential palace on Sunday chanting “troika out of Cyprus” and “Cyprus will not become a protectorate”.

In a stunning vote on Tuesday, the 56-seat parliament rejected a levy on depositors, big and small. Finance Minister Michael Sarris then spent three fruitless days in Moscow trying to win help from Russia, whose citizens and companies have billions of euros at stake in Cypriot banks.

Rebuffed by the Kremlin, he said the levy was back “on the table”.

On Friday, lawmakers voted to nationalise pension funds and split failing lenders into good and bad banks – a measure likely to be applied to the second-biggest lender, the largely state-owned Cyprus Popular Bank, also known as Laiki.

Cypriot media reports suggested talks were stuck on a demand by the IMF that Bank of Cyprus absorb the good assets of Popular Bank and take on its nine billion euros debt to the central bank as well. The reports said the Cypriot government was resisting.

A Cypriot plan to tap pension funds had already been shelved, a senior Cypriot official told Reuters, under opposition from Germany.

It was far from certain that a majority of lawmakers would back a revised levy, or whether the government might even try to bypass the assembly.

Cypriot leaders had initially tried to spread the pain between big holdings and smaller depositors, fearing the damage it would inflict on the country as an offshore financial haven for wealthy foreigners, many of them Russians and Britons.

The tottering banks hold 68 billion euros in deposits, including 38 billion in accounts of more than 100,000 euros – enormous sums for an island of 1.1 million people which could never sustain such a big financial system on its own. DM