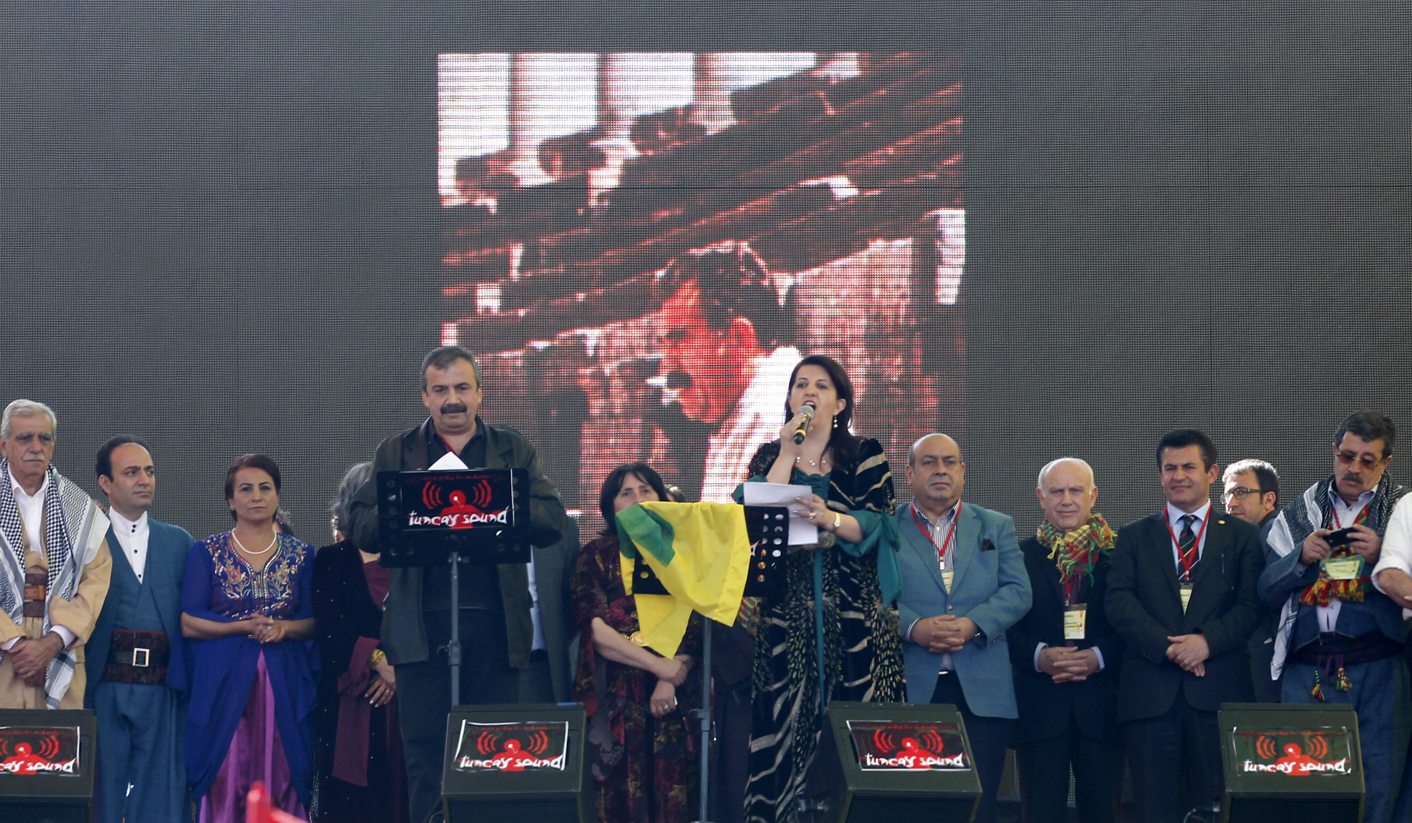 Jailed Kurdish rebel leader Abdullah Ocalan ordered his fighters on Thursday to cease fire and withdraw from Turkish soil as a step to ending a conflict that has killed 40,000 people, riven the country and battered its economy. By Ayla Jean Yackley.

Hundreds of thousands of Kurds, gathered in the regional centre of Diyarbakir, cheered and waved banners bearing Ocalan’s moustachioed image when a letter from the rebel leader, held since 1999 on a prison island in the Marmara Sea, was read out by a pro-Kurdish politician.

“Let guns be silenced and politics dominate,” he said to a sea of red-yellow-green Kurdish flags. “The stage has been reached where our armed forces should withdraw beyond the borders … It’s not the end. It’s the start of a new era.”

Prime Minister Tayyip Erdogan has taken considerable risks since he was elected in 2002, breaking taboos deeply rooted in a conservative establishment, not least in the military, by extending cultural and language rights to Kurds. But Kurdish activists demand greater freedom from Ankara.

Erdogan, talking in the Netherlands, welcomed the ceasefire call but said the real test would be putting it into action. Military operations would stop if the rebel guns fell silent.

“From the time it is implemented, the atmosphere in Turkey will change. I believe in this,” he said. But he condemned the absence of the red Turkish flag with star and crescent moon at the Diyarbakir rally.

Erdogan must carry a sceptical conservative establishment, just as Ocalan from his prison island must marshal and keep the obedience of fighters ensconced in the remote mountains of Qandil, northern Iraq, some harbouring doubts about the process.

Ocalan gave no timetable. All rebels would withdraw to bases in Qandil, which they have used as a springboard for attacks in Turkey and which themselves have been bombed by the Turkish air force.

At the bottom of a wide valley below the snow-capped Qandil mountains, thousands of people including fighters, men and women dressed in combat fatigues and carrying rifles, listened to music and grilled kebabs as they celebrated Kurdish new year. Civilians wore brightly coloured Kurdish costume. Children threaded around the gathering trailing kites.

“We are 100 percent behind our leader,” said PKK official Roj Welat. Songs were sung glorifying “Apo” as he is known and calling for his release from prison.

The Kurdistan Workers Party (PKK), regarded by the United States, European Union and Turkey as a terrorist group, launched its campaign in 1984, demanding an independent Kurdish state in the southeast of Turkey. It has since moderated its demands to political autonomy and broader cultural rights in an area where the Kurdish language was long formally banned.

“There is a strategic shift happening,” said Ertugrul Kurkcu, a parliamentarian from the pro-Kurdish BDP party. “The Kurdish liberation movement is moving from an armed campaign to a cultural one. And the PKK accepts this.”

Ocalan, isolated from his fighters for over a decade, has won public backing for a truce from field commanders over the last week; but there have been signs of scepticism in their ranks. Last month, at a meeting with Kurdish politicians he accused them of unwarranted pessimism over peace talks.

“I’m angry with them,” Ocalan said, voicing opposition to their “war system”, or strategy.

Beyond the ceasefire there are still dangers of division over the terms of a deal or between the PKK figures negotiating it. The process could also be complicated by the ambitions of other Kurdish groups across the border in Syria, Iran and Iraq.

In Diyarbakir, on Thursday, Ocalan’s authority was unchallenged, his image flashed on a giant screen and a video montage of his interviews and speeches played over loudspeakers.

The live broadcast on national television of the scenes would have been unthinkable even a few months ago. Throughout the conflict, insignia of the outlawed PKK has been strictly banned and police have intervened wherever they appeared.

“War happens, but at some point you have to dress your wounds. This is our chance now,” said Bedri Alat, 73. “I remember peace. My grandson does not. He does not remember when Kurds and Turks lived as brothers. This is a last chance.”

A settlement would lift a huge burden off Turkey, though it would be viewed with deep suspicion by hardline nationalists who fear Kurds would resume a drive for independence.

“The PKK is challenging the state and this is a display of power by them,” said Ozcan Yeniceri, a parliamentarian from the MHP, Turkey’s main nationalist opposition party.

“In place of a Turkish Republic, the road is being paved for formation of a federal independent Kurdish state.”

The war has drained state coffers, stunted development of the mainly Kurdish southeast and scarred the country’s human rights record.

A peace would bolster the NATO member’s credibility as it seeks to extend influence across the Middle East, and remove a stumbling block from its path to join the EU. It would also ease a burgeoning relationship with the autonomous Kurdish region of northern Iraq, which is yielding strong economic benefits.

Truces have been declared and secret talks held with the PKK in the past, but expectations this time have been fuelled by the openness with which the talks have been conducted.

Leftist militants launched bomb and missile strikes on Turkish government and ruling party offices on Tuesday night in attacks which Erdogan said were aimed at derailing the peace process.

“We stand behind our leader but I worry about the sincerity of the other side,” said Hasan Celik, 47, a retired farm labourer, as a fighter jet roared overhead, a reminder of the heavy military presence Turkey maintains in the region.

“It is still hard for Turks to accept that Kurds exist. There has been so much hate.”

An upsurge in violence last summer appeared to lend momentum to the nascent peace process. Turkish intelligence officers began meeting Ocalan in October on his prison island in the Marmara Sea. In November, he proved his continued authority by ordering the end of a hunger strike by hundreds of jailed Kurds.

Growing Kurdish assertiveness in war-torn Syria have added to the sense of urgency.

“We are ready for both peace and war,” a group of PKK youths in militant fatigues, their faces wrapped in headscarves, said from the stage, their statement a reminder of a widely-held view that the conflict could flare up again if this peace bid fails.

Abdullah Demirbas, a Diyarbakir district mayor, spoke of a last chance for peace.

“The next generation is like a storm. It is more radical. It has never known peace between Kurds and Turks. Now you can still convince many of them, we can still win them over. But if we lose them this time, they will never listen to us again. DM

Photo: Pro-Kurdish politicians Sirri Sureyya Onder (3rd L) and Pervin Buldan (6th R) read the statement of jailed Kurdish rebel leader Abdullah Ocalan as they are flanked by other Kurdish politicians during a gathering to celebrate Newroz in the southeastern Turkish city of Diyarbakir March 21, 2013. Ocalan ordered his fighters on Thursday to cease fire and withdraw from Turkish soil as a step to ending a conflict that has killed 40,000 people, riven the country and battered its economy. Hundreds of thousands of Kurds, gathered in the regional centre of Diyarbakir, cheered and waved banners bearing Ocalan’s moustachioed image when a letter from the rebel leader, held since 1999 on a prison island in the Marmara Sea, was read out by a pro-Kurdish politician. REUTERS/Umit Bektas