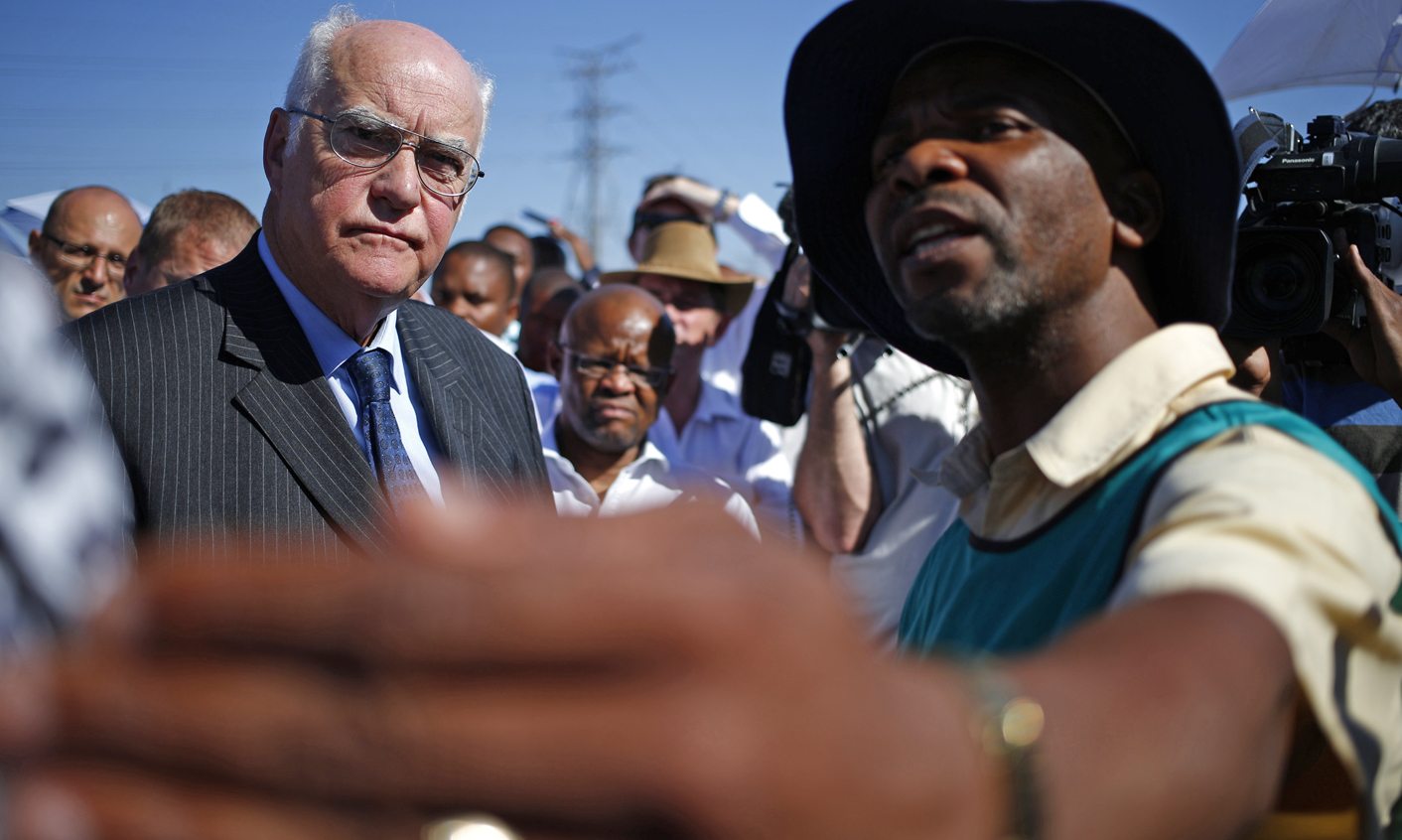 With national police commissioner Riah Phiyega unavailable to testify on Wednesday at the Marikana Commission of Inquiry, the chairman, Judge Ian Farlam, spent the day inspecting an area where police and miners clashed prior to the massacre. One of the visit’s key objectives, it appears, was to remind the public who the commission was trying to serve. By SIPHO HLONGWANE.

When the commission was first announced last year, one of the concerns was travelling arrangements for the families of the deceased, from their homes in the Eastern Cape to Rustenburg. The Department of Justice and Constitutional Development, tasked with running the commission’s infrastructure, was first put in charge of transport. Then, at the end of October, a spokesperson announced that the department would not be footing the bill because there was no legal basis for the state to carry the cost. While technically correct, the insensitivity of the statement sparked an outcry.

The Socio-Economic Rights Institute (Seri), which represents the families of 25 dead miners at the commission, captured the essence of the commission. After complaining that it had not been consulted before the decision was taken, the organisation reminded the state of its duty to justice.

“Our clients are distraught. They want to know the truth about what happened to their loved ones on 16 August. They want the opportunity to see the evidence unfold. They particularly want to see and hear for themselves what the police have to say about their conduct on 16 August. Our clients also want to hear the eyewitness accounts of those who were with their loved ones when they died,” Seri said.

A few days later, the state said that it would find a way to make the travel of the families its responsibility.

That subtle acknowledgement by the government, that the point of the commission is to find the truth to allow closure for the families of the deceased, is something that commission chairman Judge Ian Farlam has had to struggle with. There are several barriers. The nature of the case is gruesome, often leading to distressing scenes of distraught family members recognising their loved ones in police photos and videos that are broadcast at the commission. The relatives often struggle to understand the process, mistaking testimony from the police as the final version that the judge will accept. (I’ve had to console at least two relatives who phoned to ask why the judge was not stopping the police from lying.) Then there’s the distance – more than the one from the Eastern Cape to the North West is the one between the lived reality of Marikana and the air-conditioned auditorium at the Rustenburg Civic Centre. If justice is being done in the name of the families of the dead, then the process has to help them keep apace.

Farlam’s site visit this week may have been inspired more by a need to be seen by the Marikana community to be serving justice than strict fact-finding. When the commission began last year, one such visit was made to the area. There is the mountain of evidence from a number of sources that the commission has received.

The visit focused on the area at Lonmin’s K3 Shaft where North West deputy police commissioner General William Mpembe spoke to workers on 13 August, and where two police officers and three miners were killed in a confrontation. The judge was shown the area by Mpembe and some of the miners that were there, prior to the commissioner’s testimony.

Some 10 people were killed prior to the 16 August massacre, some of them by striking miners.

A lawyer at the commission, speaking on condition of anonymity, said that in criminal cases it wasn’t usually necessary for the judge to visit the site of an alleged crime. “The information needed to make a decision can actually be got from documents presented in trial. But in this case it is very important to make sure that the people of Marikana see him to be doing the work. Otherwise the families just see lawyers arguing and they don’t see how that will bring justice,” he said.

Peter Alexander, an academic and author of Marikana: A View from the Mountain and a Case to Answer, has criticised the commission for losing touch with the people most affected by the massacre.

“The inquiry is a lawyers’ paradise. The torture on the workers, their pain and suffering is not being brought to the commission’s chairman. It is not neutral,” he said.

The scenes at K3 could not be dismissed as a lawyers’ paradise with no connection to the human element. As the men leading Farlam around the area showed where one police officer was hacked to death by miners, a woman began to weep. It was the deceased’s sister.

Of course, the outcomes of the commission will not be determined solely by how satisfied the relatives are by the process, but their satisfaction is an important duty that must be discharged. DM

Photo: Police investigators show retired judge Ian Farlam (L) where bodies were found during a site inspection by the judicial commission of inquiry into the shootings at Lonmin’s Marikana mine October 1, 2012. REUTERS/Mike Hutchings