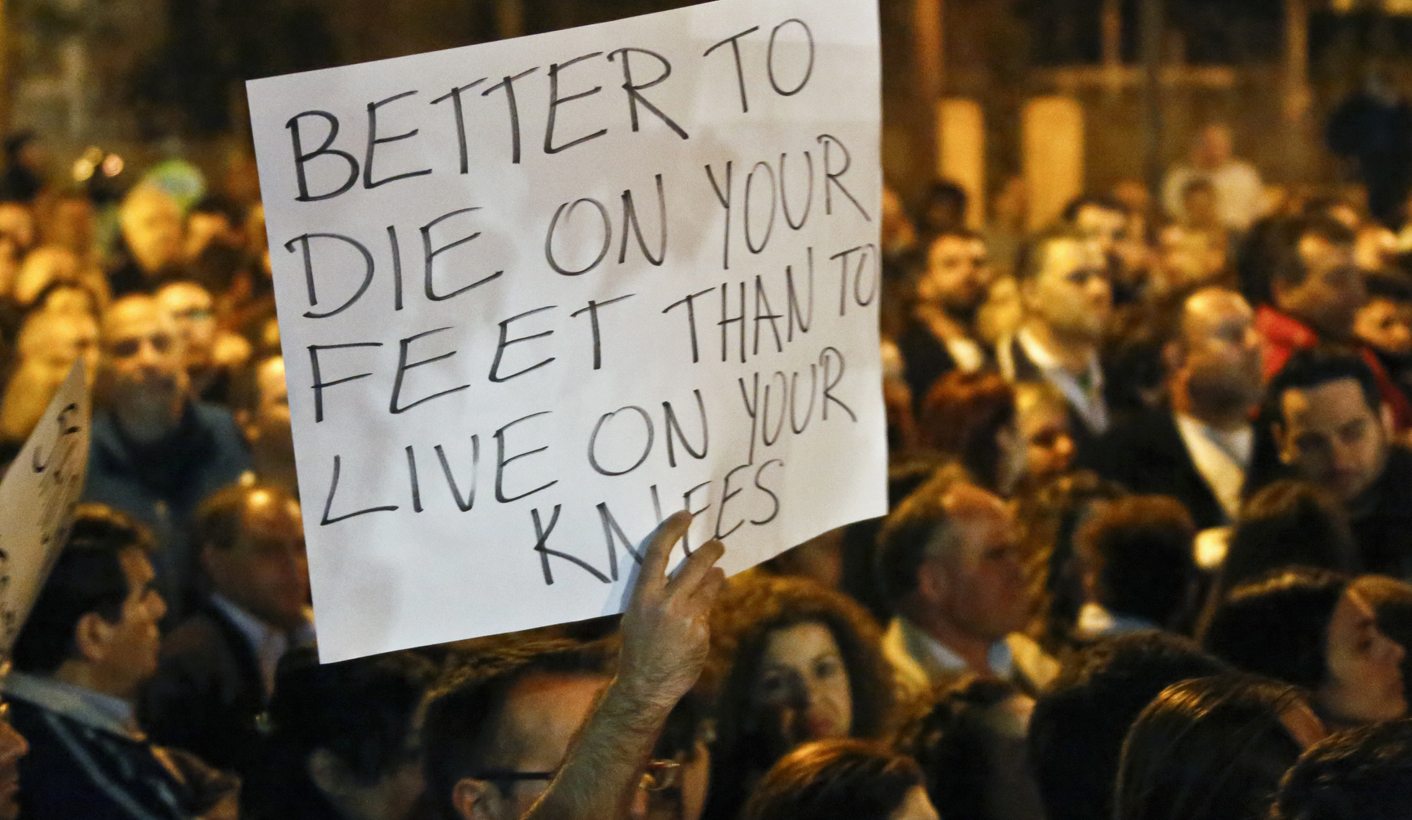 The European Union gave Cyprus till Monday to raise the billions of euros it needs to secure an international bailout or face a collapse of its financial system that could push it out of the euro currency zone. By Michele Kambas and Matt Robinson.

In a sign it was at least preparing for the worst, the Cypriot government sought powers on Thursday to impose capital controls to stem a flood of funds leaving the island if there is no deal before banks reopen following this week’s shutdown.

In stark warnings earlier in the day, the European Central Bank said it would cut off liquidity to Cypriot banks and a senior EU official made clear to Reuters that the bloc was ready to see the bankrupt island banished from the euro in the belief it could then contain damage to the wider European economy.

The ECB ultimatum came as the island’s leaders struggled to craft a “Plan B” to raise the 5.8-billion euro contribution demanded by the EU in return for a 10-billion euro ($13-billion) bailout from the EU and IMF; angry Cypriot lawmakers threw out a tax on deposits, calling the EU-backed proposal “bank robbery”.

In a mark of strained relations and confusion, euro zone officials conceded during a conference call on Wednesday which Cyprus refused even to join that the situation was “in a mess”.

Zone finance ministers held more talks on Thursday evening on a crisis that has unsettled the entire continent and not just put the Cypriot economy in jeopardy but billions of euros held on the island by foreigners, notably from Russia.

The Cypriot government said party leaders had agreed to create a “solidarity fund” that would bundle state assets as the basis for an emergency bond issue, but the speaker of parliament, Yiannakis Omirou, insisted a revised levy on uninsured bank deposits was not on the table.

The governor of the central bank said it would impose a plan to avoid bankruptcy at the second biggest lender, Cyprus Popular Bank, but it remained unclear how measures would work.

As parliament prepared to sit on Thursday evening, the government submitted a bill seeking the power to impose capital controls on banks, a type of measure unseen since before the country joined the EU single currency bloc five years ago.

“The purpose of this law is, in case of an emergency for purposes of public order or security, to assign powers to the (finance) minister, or the (central bank) governor to take and impose temporary restrictive measures, including restrictions on capital controls,” read the bill.

The European Central Bank, which has kept Cyprus’s banks operating with a liquidity lifeline, said the government had until Monday to get a deal in place, or funds would be cut off.

“Thereafter, Emergency Liquidity Assistance (ELA) could only be considered if an EU/IMF programme is in place that would ensure the solvency of the concerned banks,” the ECB said.

In Brussels, a senior European Union official told Reuters that an ECB withdrawal would mean Cyprus’s biggest banks being wound up, wiping out the large deposits it has sought to protect, and probably forcing the country to abandon the euro.

“If the financial sector collapses, then they simply have to face a very significant devaluation and faced with that situation, they would have no other way but to start having their own currency,” the EU official said.

Bank branches have been closed all week and are not due to reopen until Tuesday, though ATMs have continued to issue cash.

Several hundred protesters, many of them bank employees, rallied outside parliament after rumours Cyprus Popular Bank was to be wound up. Demonstrators chanted “Hands off the bank!” and several jostled with riot police, briefly breaking through a cordon. Cyprus has so far avoided the kind of unrest seen in neighbouring Greece, the epicentre of the euro zone debt crisis and the origin of many of the losses undermining Cypriot banks.

Until this week, the expectation in Brussels and on financial markets had been that the election of a new Cypriot president in February would smooth the path to a bailout deal.

But although conservative President Nicos Anastasiades struck a deal last weekend in Brussels, it was unanimously rejected by parliament on Tuesday. While EU lenders, notably Germany, wanted uninsured bank depositors to help ease banks’ debts, Cyprus feared for its future reputation as an offshore banking haven and planned to spread the tax also to small savers whose deposits under 100,000 were covered by state insurance.

Cyprus’s central bank governor said he expected to clinch a financial support package by Monday. He did not say how.

Bank of Cyprus , the country’s largest lender, issued a statement pleading with the political leadership to strike a deal “to save the Cypriot economy”.

In Moscow, Cypriot Finance Minister Michael Sarris said he was discussing possible Russian investments in banks and energy resources to reduce its debt burden, as well as an extension of an existing 2.5-billion-euro Russian loan.

“The banks are the ultimate objective in any support we get, so it’ll either be a direct support to the banks or the support that we get through other sectors will be channelled to the banks,” Sarris told Reuters during a second day of talks with his Russian counterpart, Anton Siluanov.

He said Cyprus had no plans to borrow more money from Russia and add to its debt mountain. The Russian Finance Ministry had said on Monday that Nicosia sought an extra 5-billion-euro loan.

The chairman of euro zone finance ministers, Dutchman Jeroen Dijsselbloem, told the European Parliament in Brussels that Moscow had informed the EU it had no intention of ploughing more money into Cyprus beyond the existing loan.

“Any other options, to go further, another loan or an investment in the banks, the Russians let us know that they are not willing to do that,” he said, adding that that might change.

But Dijsselbloem said new loans from Russia would in any case not solve the country’s debt problem, and that a revised levy on larger bank deposits was also still a possibility.

“I’m not sure that this package is completely gone and failed, because I don’t see many alternatives,” he said.

Senior euro zone officials acknowledged in a confidential conference call on Wednesday that they were “in a mess” and discussed imposing capital controls to insulate the currency area from a possible collapse of the small Cypriot economy.

Cyprus itself refused to take part in the call, minutes of which were seen by Reuters. Several participants described its absence as troubling and reflecting the wider confusion surrounding the island’s predicament.

EU officials believe at least some of the 5.8 billion they are demanding should come from the 68 billion euros in Cypriot banks, 38 billion of which are in large deposits of more than 100,000 euros, mainly from Russians and other foreigners.

Hitting small savers caused visceral outrage, but the Cypriot government fears that foisting too big a burden on large depositors would wreck the offshore financial industry that accounts for much of the country’s economy.

Among the other options, nationalising pension funds of semi-public companies could yield between 2 billion and 3 billion euros. Issuing bonds linked to future natural gas revenue is problematic because pumping any gas is years away.

Doubts about the fate of the small nation of just 1.1 million people has shaken confidence in the euro zone and raised geopolitical tension between the EU and Russia.

Russian Prime Minister Dmitry Medvedev said the bloc had behaved “like a bull in a china shop”.

Tuesday’s parliamentary vote marked a stunning rejection of the kind of strict austerity accepted over the past three years by crisis-hit Greece, Portugal, Ireland, Spain and Italy.

Photo: A protester holds a placard during a rally by employees of Cyprus Popular Bank outside parliament in Nicosia March 21, 2013. The Cypriot central bank denied reports and frantic rumours on Thursday that stricken Cyprus Popular Bank, the island’s second-largest lender, is to be closed down. REUTERS/Yannis Behrakis