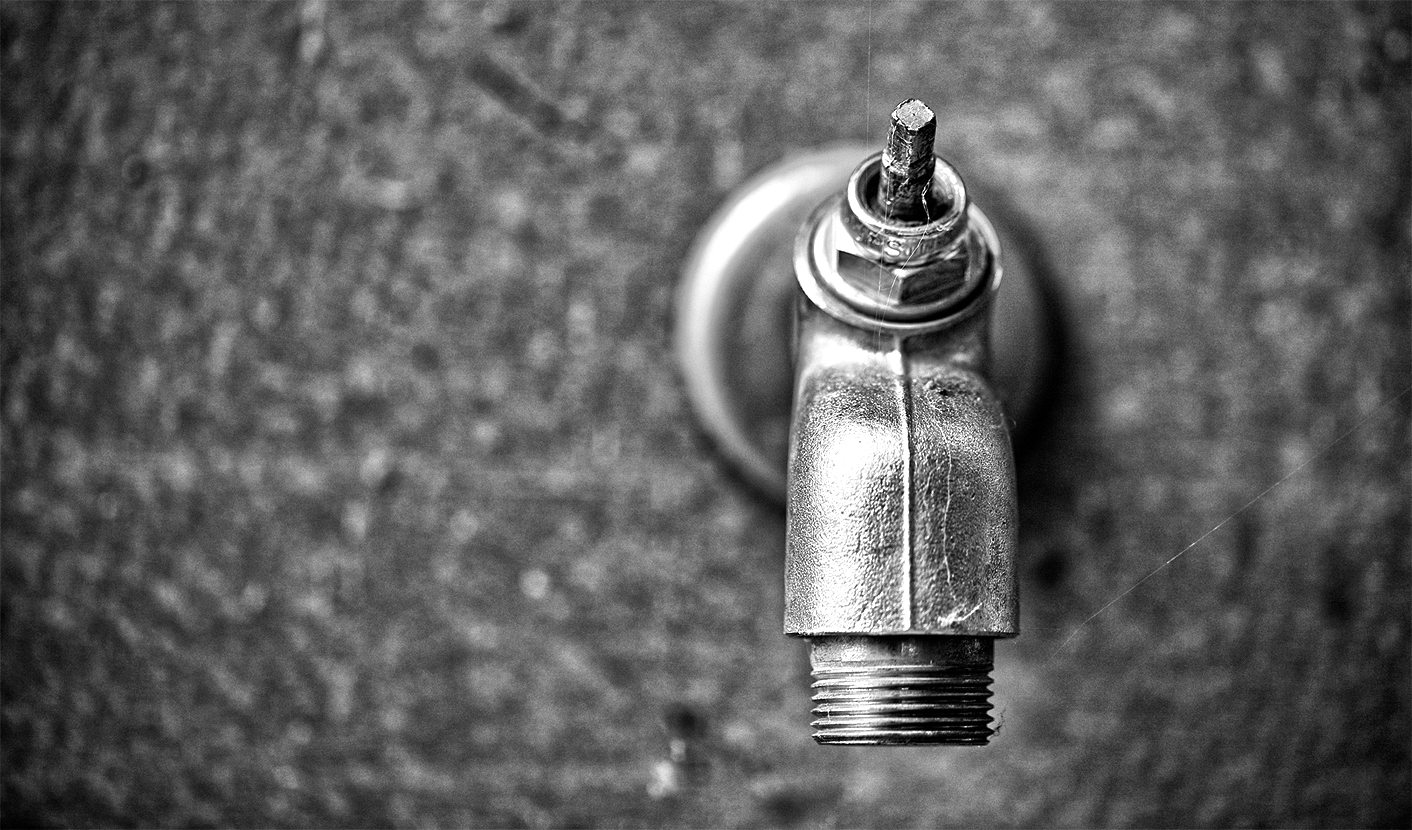 As South Africa marks National Water Week, news stories and studies show that our country’s water affairs is in a deep crisis... and things won't be getting better any time soon. By MANDY DE WAAL.

Thirty-four-year-old David Makele and his neighbours had been without water for days on the weekend beginning Friday 8 March 2013, and so the young man walked from his home in Hlalani to another area in Makana, which encompasses twelve municipalities, including Grahamstown. It was during the return journey, having collected water from a municipal truck during the outage, that Makele collapsed and expired.

“It is indeed sad news that a member of the community died,” Municipal spokesman Mncedisi Boma told Grocott’s Mail. “It is unfortunate that at the time of his death he was looking for water and that as the municipality we were providing water through our trucks.”

The desperate irony is that Makele’s death happened on the eve of National Water Week, being promoted by the Department of Water Affairs from March 18 to 24 2013, to reiterate “the value of water, the need for (the) sustainable management of this scarce resource and the role water plays in eradicating poverty and under-development in South Africa.” World Water Day will be marked across the globe on 22 March 2013.

The terrible tragedy is that it is likely this deadly scenario could be repeated in towns and cities across the country that are struggling to deal with water outages, contaminated water and other disasters that affect their supply of the life-giving necessity. Crises which often boil over in service delivery protests and riots.

This has been the case in the North West, where protests erupted at the end of February in Hammanskraal and Steve Bikoville, after residents there suffered without reliaable, clean drinking water for two months. Pretoria News reports that angry protestors claimed not to have access to clean water since January.

“We have a very big problem with water in the area. The water does not reach us,” a member of the public told the newspaper.

“No water comes out when taps are opened. When toilets are flushed, no water comes out,” said another person, while one resident said she had consumed water from a nearby stream and got very ill.

“We get sick from the water. We develop stomach cramps and diarrhoea. Sometimes I even bleed when I have diarrhoea,” the protestor said.

Across the country in KwaZulu-Natal, there’s another water crisis – but this time the disaster is wastage. In this province, the eThekwini Municipality declared that it was losing more than 237 million litres a day. The shocking waste of water was revealed when the municipality tabled its quarterly financial results in Durban on the advent of National Water Week, Monday 18 March 2013.

The Daily News reported that this water loss was mainly caused by “burst water pipes, theft, leaks and overflows in the city’s 13,000km of pipes”, and that this loss had increased by 3.467 million litres every day in comparison to the 2011/2012 financial period. The reason for this massive water wastage? Essential equipment that should have been purchased by the municipality had not been bought.

There’s an old saying that a fish rots from the head first – which is apt for the Department of Water Affairs. The DG of this department, which governs a crucial national service, was suspended five weeks ago, but has yet to be charged. Business Day reports that Maxwell Sirenya has still to be put through a disciplinary procedure, even though he was “marched out of his office by security officials”.

“Mr Sirenya is the second administrative head of the department to be suspended in the past five years. Before hiring him, the department went 30 months without a permanent head.

“Hardly a year into the job, Mr Sirenya was suspended by Water Affairs Minister Edna Molewa, who told the Cabinet this was due to a ‘labour dispute’,” the business newspaper reads. “The fallout threatens to hobble a key department meant to deal with infrastructure backlogs, at a time when water experts warn that South Africa faces a water crisis akin to the energy problems in 2008, which slowed the economy and damaged the country as an investor choice.”

Sirenya is suspected of corruption that relates to procurement processes at the water affairs department, which the newspaper said is “notorious for outsourcing services and dodgy staff reimbursement claims. In the financial year that ended March 2012, the department spent R2 billion on consultants and staff travel claims — enough to eradicate South Africa’s water infrastructure maintenance backlog.”

As Harold Smook, founder of a sustainable community called Urban Roots, says, South Africa might have the most progressive policies in the world, “but when it comes to implementation we have nothing to celebrate. South Africa’s poor performance is mostly because of the environmental devastation caused by the overexploitation of our limited water supply,” says Smook.

“Acid mine drainage, water system losses and pollution, a lack of holistic approach to water security, poor demand management, unchecked mining activity and our continuous hunger for coal-fired power plants has resulted in 84% of South Africa’s 112 unique river ecosystems being classified as threatened and a disturbing 54% [becoming] critically endangered,” he adds.

Smook believes that the problem should be approached far more holistically. “The interrelatedness of water, energy and food has to form part of any attempt to improve water security. Once water-stressed conditions arise there are significant trade-offs resulting from the water-food-energy nexus. In South Africa the conditions of our natural ecosystems, combined with the increase in coal fired power plants and increased mining activities, is an indication that government is focused on economic growth at all costs rather than the basic human needs of the people: water and food security,” he says.

Smook, who will be talking at African Utility Week in Cape Town in May 2013, reckons that South Africa has a massive water budget deficit and that R670 billion is needed over the next ten years to offer access to previously unserviced communities (17%), grow and maintain water infrastructure (34%), and rehabilitate existing infrastructure (49%). But government only has a budget of R332 billion, which means a deficit of R342 billion.

The human impact of the water crisis was driven home by the South African Human Rights (SAHRC) Commission on Tuesday 19 March 2013, when it tabled a damning report on this country’s water catastrophe, after receiving a deluge of complaints about shortages, irregular supply and bad water quality during the past two years. The commission chose to commemorate Human Rights month with a National Water and Sanitation hearing, to hold the government accountable for realising rights in poor communities.

The commission is waiting for a  government response to its large-scale study, and will release the full report in about a month’s time. An extract of the report shown by the SAHRC to Daily Maverick indicated that SA’s water and wastewater treatment plants are in a dire state of disrepair; and that many households have access to infrastructure that was either never functional or was functional but has since broken or has not been maintained. The commission added that water and sanitation infrastructure in communities is in poor condition due to poor original workmanship and a lack of maintenance.

The study showed that many households still used buckets and fields to meet their sanitation needs, and the SAHRC said this impacted on personal hygiene; created health problems that spread through marginalised communities; and exposed women and young girls to sexual assault when they used fields for sanitation, particularly in outlying areas.

Back in Hammanskraal and Steve Bikoville, the link between SA’s water crisis is clear for all to see. After being deprived of their basic human right – access to water – communities erupt into rage. And as the mismanagement of this country’s water resources intensifies and more communities face life with an uncertain water supply, or water that’s not fit for consumption, this country increasingly begins to look like a dry tinderbox waiting for a match. DM