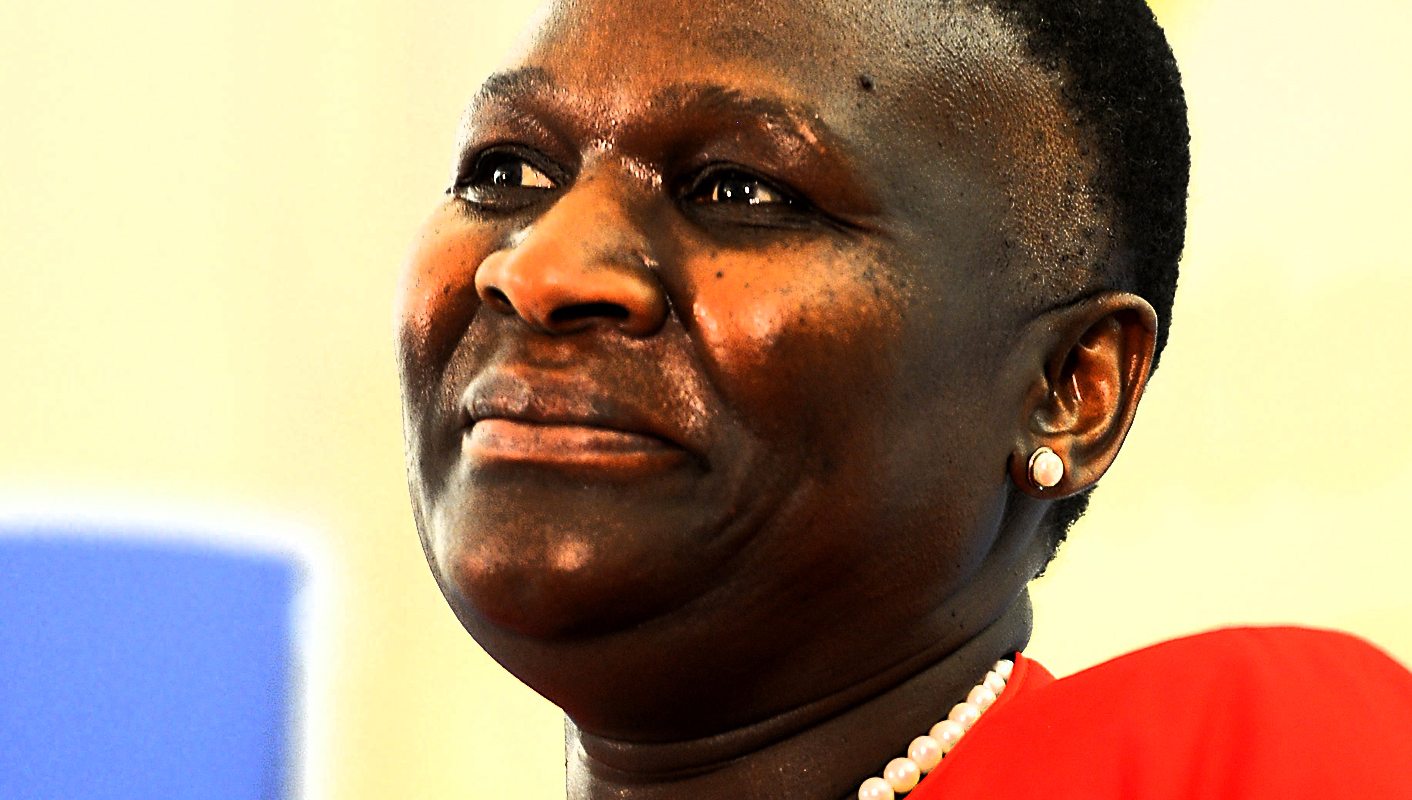 No matter how hard police commissioner Riah Phiyega tried to wriggle out of answering the Farlam Commission’s questions, one thing is clear: The police general does, at very least, know for certain that one of the policeman at Marikana reported seeing another policeman shooting an injured miner in cold blood. Her testimony also revealed more starkly than ever that she is a pawn in a massive cover-up. By GREG MARINOVICH.

On a hot autumn day, the remarkably obdurate police commissioner General Riah Phiyega, ducked and dived the questioning of the head evidence leader at the Marikana Commission, advocate Mbuyiseli Madlanga.

Question after question was evaded by the visibly uncomfortable police boss, as she sought to respond with one-word answers to questioning from an increasingly frustrated Madlanga.

Throughout the morning, the social network Twitter was alive with how ignorant and arrogant Phiyega sounded, and how she is unlikely to keep her job, given her performance under oath.

Some reporters tweeting seemed to feel she was being grilled, while others thought she was simply avoiding any tough answers. The sense of anger at her hindrance of a process that is meant to get at the truth of the Marikana massacre was quite palpable.

Yet it was just before lunch that Madlanga dropped a bomb. He had spent the morning weaving a web of her making to ensure that she was indeed standing by her initial statement of 17 August, 2012, the day after the massacre. In that statement, she presented the line that police were acting in self defence, and were upholding public safety. The police commissioner insisted that she had been told nothing, and seen nothing, to change her mind on that matter.

Then Madlanga read from a statement by a policeman in the dog squad, Warrant Officer Hendrich Wouter Myburgh. In that statement he tells of being under the command of Major General Ganasen Naidoo, who ordered him and others to follow the National Intervention Unit policemen and to search for weapons and firearms at the “koppies”.

Myburgh says that they were being shot at by miners as they approached Scene 2, or Small Koppie – Thaba Nyana, and so stopped, finding cover. When the gunfire had quietened down, he advanced into the “koppies” and “found 3 injured people lying down and (I) turned away from them, searching for other suspects. I suddenly heard a gunshot behind me, as I turned I saw a NIU constable who is unknown to me putting his side firearm in his leg holster while he was standing next to the injured I first met ,who was having a jersey wrapped around his arm. I asked the NIU constable what is going on, he replied by saying ‘they deserve to die’ and he moved away.”

As appalling as that statement is, what follows is equally startling. At this point that he simply stops his narration of events on 16 August, and the affidavit then skips to 1 October, some one-and-a-half months later. Myburgh says that on 1 October, he reported the incident of the miner being killed to a colonel, and then later that same day to his then commander, Gen Naidoo. He says that these were the only two policemen he had, until then, told of the incident.

When Madlanga questioned Phiyega on this, she replied that she was aware of the statement, but that Myburgh had just made an allegation. On being quizzed further on what she had done about it, she said that the incident had first been reported to Myburgh’s commanding officer, Naidoo, and then, the following day, Myburgh repeated his tale to Phiyega, Naidoo and deputy police commissioner for the North West, Lt Gen Mbombo. After this meeting, Phiyega said it was the responsibility of Naidoo and Mbombo to investigate further. The only result was that a statement was taken from Myburgh and sent to the Independent Police Investigative Directorate (IPID).

It seems that everyone was rather relieved by the fact that Myburgh said he could not recognise the face of the NIU constable, and had not seen his name tag. Conveniently, it would seem, the police did not pursue this further. Phiyega said it was very difficult to pursue the enquiries further.

It appears that the evidence leaders of the commission had no such difficulty.

The commission evidence leader, Madlanga, then introduced SAPS records of which policemen discharged what type of weapon. The records indicate that there were only four NIU members who fired 9mm pistols at Scene 2, Small Koppie.

Of those four NIU policemen who discharged their 9mm pistols there, only two were constables, Mkhululi Halam and Sebenzile Thafeni. Halam is said to have fired three 9mm rounds, and Thafeni to have fired two.

Interestingly, in Naidoo’s statement referring to the same day, he says that he formed the men under his command into a line, and describes how they took cover while under fire at one stage. It reflects all that Myburgh says of the event, with some further embellishments about who was firing at the police. Yet Naidoo does not report on an incident similar to Myburgh’s. In fairness, and in the chaos of the day, they might have not shared all the same experiences.

What is even more astonishing in Myburgh’s affidavit is that he states: “I did not inform anybody immediately after the shooting incident as I did not regard this shooting incident as that serious; as I only became aware that it is serious after we were briefed that all bodies found on the hill were to be accounted for by all responsible. I then decided to report all that I witnessed on that day.”

Myburgh did not consider the cold-blooded murder of a wounded man as “that serious”? Does this insight into his state of mind reflect that of the other policeman at Marikana that day? That murder is okay? Did they think it was a hunt, and there were to be no consequences? If they did believe this, what led them to think that?

So, as the commission closed the police commissioner’s testimony for the week, she stood by her statement that her cops were acting in self defence, based on what she knew at the time. That time being 17 August. Yet by her own evidence, on 2 October, she heard from a warrant officer in the SAPS that he had witnessed another policeman murder a wounded miner lying on the ground. This has never entered the narrative of the police, nor has the police commissioner ever changed her stance.

Let us not forget that Poloko Tau’s superb report in The Star of September of last year when told us of witnesses seeing policemen executing wounded miners. Let us not forget the DM’s own articles about the murder, in August and September of 2012, or the Carte Blanche programme on the murders at Small Koppie. There is no shortage of material that the commissioner could have used to fully inform herself.

If her answers continue in this vein, if she remains resolute that police acted only in self defence, even when she was in possession of facts that might indicate otherwise, even the most ardent police supporter would have to agree that the commission can only find Phiyega unfit to hold office.

Let us look at her statements to the commission. Her first, unsigned statement does not mention Police Minister Nathi Mthetwa at all. Her second, official statement, says that when it was decided by the operational command to go to stage three (the so-called “tactical phase”), she immediately informed the minister. Her final word on this was when she amended the submitted statement by hand, on the stand, today. There, she says that she only informed the minister afterwards. She further amended that statement from saying that the minister ordered her to Marikana, to that she had told the minister she was going to Marikana.

There is a clear and orchestrated cover-up, from the national police commissioner, to the provincial police commissioner to the operational commander, of the fact that at least one member of the SAPS said that he witnessed a murder. Besides not opening a murder docket, none of these people we are meant to entrust with our safety informed the Farlam Commission or veered from the line that all, all, the miners’ deaths at Marikana were because police had to defend themselves.

General Riah Phiyega is acting like a spokeswoman for whatever line her career police officers tell her to toe. She is a cheerleader for the “boys in blue”, as opposed to their leader. She has swallowed hook, line and sinker the porridge fed her by the cops investigating the Marikana massacre, the very same cops who were in command on the day.

Her neo-silence tells us more than she, and the state that stand behind her, ever openly will. She was clearly acting on orders from above, and she has been told to hold the line, to not let the dirt of the death of 34 miners besmirch her political masters. DM