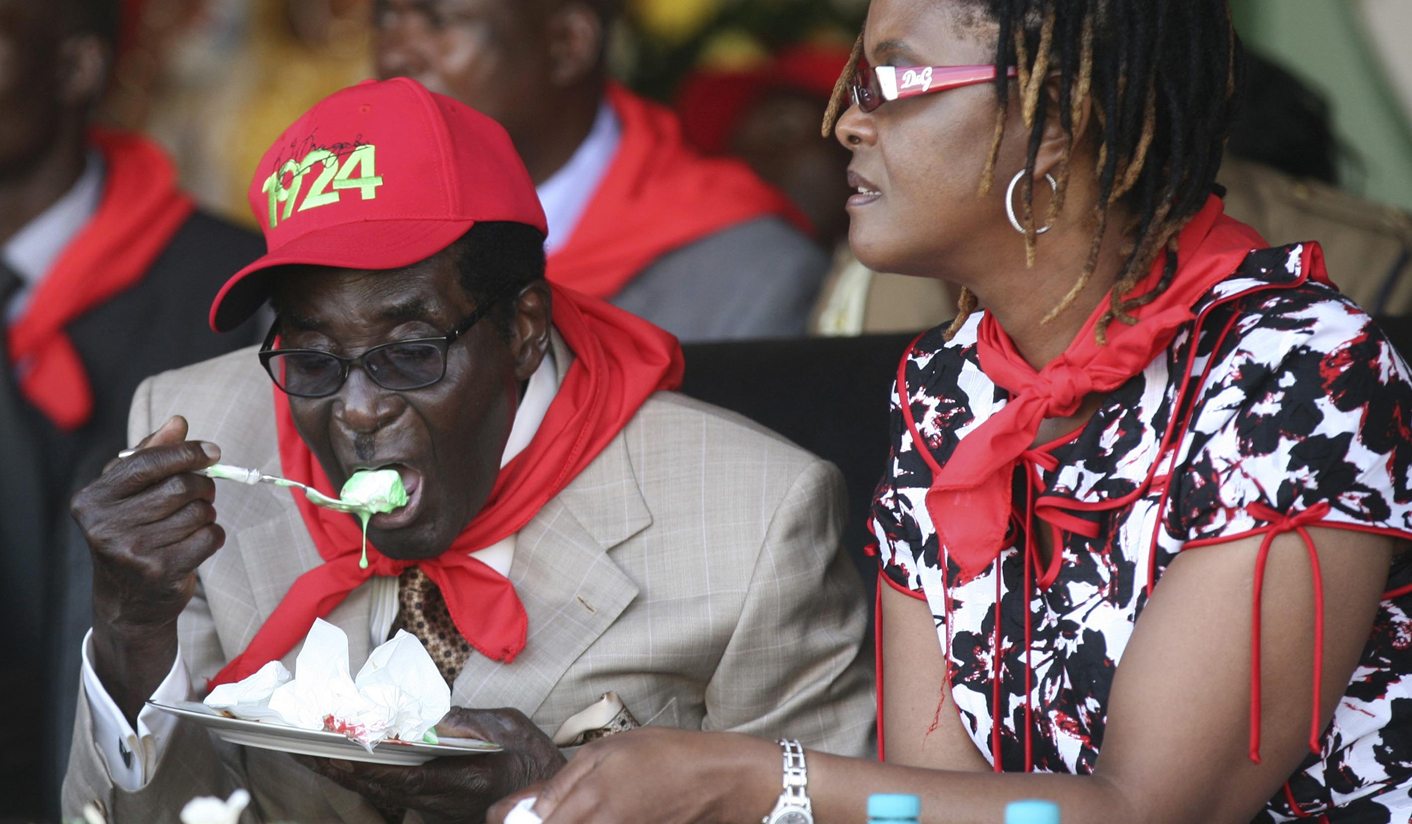 As the ballots are being counted after a one-day referendum that will decide whether Zimbabwe votes for reform and brings in a new constitution, that country’s treasury is begging minerals companies to pay what they owe to government coffers. But a shady diamond company, reportedly linked to Mugabe, continues to funnel funds out of Zimbabwe thick and fast through opaque business networks with strong SA links, as a Nkandla-sized homestead called ‘Mugabe’s mansion’ nears completion on KwaZulu-Natal’s mink and manure belt. By MANDY DE WAAL.

In Pretoria, Davison Mavanyana, a Zimbabwean national who fled to South Africa some three years ago, takes time out from his job as a car guard to speak about the referendum on a new constitution that is being held in his home country. “Voting on this is important because we want new laws that are more strict and which will bind democracy more closely to the running of the country. If we have these new laws it will be much better,” says Mavanyana, who works in an upmarket shopping centre in Centurion.

A farmer who used to grow vegetables in the south-eastern Zimbabwe’s lush, humid region of Chipinge, Mavanyana was forced to take flight from his home and business after being driven out by ruling party loyalists. “I am a supporter of the Movement for Democratic Change, and because of this the Zanu-PF (Zimbabwe African National Union – Patriotic Front) destroyed my family home in 2009, which was incredibly painful,” he says.

“I was a farmer. I grew beans, tomatoes and other vegetables which we used to sell in Mutare,” Mavanyana says. Situated some eight kilometres from the Mozambican border, Mutare is the third largest city in Zimbabwe. “It was a good life and I made fair money, but the issues with Mugabe eventually saw things becoming more and more difficult for people like me,” he adds.

“The end came after Zanu-PF set fire to my house and I was forced to go and live with my father. I came down south to be safe and make a living, but it is so difficult to find work here. I have a matric and a good education, yet I must look after people’s cars and then beg them for money,” says Mavanyana.

The Zimbabwean national says that if his countrymen and women vote “yes” to a new constitution, 89-year-old Zanu-PF leader and president Robert Mugabe would see his powers curtailed.

After a campaign of violence during the 2008 general elections, Mugabe was forced into a power sharing government with his key rival Morgan Tsvangirai, who heads a faction of the MDC, which split into two in 2005.

The new constitution seeks to limit presidential powers by curbing the ability to pass dictatorial decrees and restricting presidential terms to two five-year periods. The draft constitution would augments the powers of Zimbabwe’s parliament and cabinet; prepare the way for the next general election; and see the introduction of the country’s own ‘truth and reconciliation’ process – to be called the a National Peace and Reconciliation Commission. Importantly, a “yes” vote would help bolster the bill of rights and realise a partial devolution of centralised power.

“What we want to do to is cut back the president’s powers because currently he has way, way too much power. Mugabe is very clever when it comes to robbing the country and the opposition party, and we need stricter laws to make sure this doesn’t happen,” says Mavanyana.

“If the outcome of the referendum is positive, I believe that life will change, and things will improve,” he adds, as a fellow Zimbabwean national called Mtepo Dhibi joins in the interview.

“Look, the new constitution won’t be perfect, but it will be a lot better than what we have in Zimbabwe now. I am hoping that this will eventually lead to a change in the government which will see more investment flowing in, instead of more of the same which is oppression and police beating people. If the economy improves there will be jobs and people can eat instead of poverty and unemployment,” says Dhibi, who worked at a tobacco processing plant before land invasions saw that industry brought to its knees.

In Zimbabwe, both Mugabe and Tsvangirai pushed for a “yes” vote in the one-day referendum which took place on Saturday 16 March 2013, the outcome of which is expected towards the weekend. “We shall not brook with anyone who interferes in our country and those who want to encroach in our country,” Mugabe was quoted in Bloomberg BusinessWeek after casting his vote at a primary school in the capital of Harare. “We have a right to defend ourselves. We shall not brook with those people who want to steal our country, our natural resources, minerals,” the autocrat stated.

On the same day that the authoritarian octogenarian placed his cross, South Africa’s Independent on Saturday reported that a homestead it called the “Mugabe mansion” was near completion on KwaZulu-Natal’s mink and manure belt. Situated next to uber wealth play place, Zimbali, and built by Mugabe crony-cum-diamond-mogul Robert Mhlanga, the Nkandla-sized development is estimated by Independent on Saturday to be worth R200 million. It sports Balinese-type buildings, man-made dams, lush vegetation and rolling, manicured lawns as well as underground bunkers.

Mhlanga, reports amaBhugane (Mail & Guardian’s investigative arm), is a rich Zimbabwean businessman who is at the centre of an “opaque network of companies set up to cash in on the Marange diamond fields with the help of the Zimbabwe government”; and is also the business representative of the Mugabe family. Mhlanga wholly owns an SA company called Liparm, situated in The Forum on Maude Street, Sandton, which has a commercial relationship with another local company called the New Reclamation Group (Reclaim). Mhlanga’s Marange diamond field business, Mbada Diamonds, owns shares in Reclaim through Groundwell Holdings, a Mauritian based business, of which Mhlanga is a director.

An investigation into the Marange diamond business was done recently by Global Witness, a UK-based non-governmental organisation that investigates the role of natural resources in funding conflict and corruption around the world. In its report ‘Diamonds : A Good Deal for Zimbabwe?’, Global Witness states that the Zimbabwean army seized the Marange diamond fields in 2008, killing and wounding many small-scale miners in the process. This was the same year that Zimbabwe’s power-sharing government wrestled control of that country’s government treasury out of Mugabe’s hands.

Since the bloody appropriation of the diamond fields, the resource watch organisation says: “Diamond mining concessions have been allocated to several companies in questionable circumstances.” Mhlanga’s Mbada Diamonds is one such company. “[A total of] 25% of Mbada was passed to a third party, Transfrontier, which has an opaque company structure based in secrecy jurisdictions and tax havens. The beneficial owners of Transfrontier are unknown. However, the firm is named as a ‘sister company’ by a South African firm, Liparm Corporation, whose sole director is former Air Vice Marshal Robert Mhlanga, who is also the chair of Mbada,” reports Global Witness.

“Mr. Mhlanga was a prosecution witness in the 2003 treason trial of then MDC opposition leader Morgan Tsvangarai. Mhlanga is reported to have been Chief of Staff Operations at the National Command Centre which controlled the announcement of poll results in the disputed 2002 presidential election,” the report continues.

The investigation questions where Mbada and Transfrontier and its associated companies registered in tax havens pay their taxes. “Complex legal structures and secrecy jurisdictions can be used to hide who benefits from natural resources. Such secrecy is inappropriate for national assets and has the potential to conceal corruption, tax avoidance or off-budget government spending,” the investigation states.

Earlier this year, Mbada Diamonds announced that it had built offices for Zimbabwe’s Civil Aviation Authority while at the same time securing more operating space at Harare International at a cost of half a million dollars. Zimbabwean Transport Minister Nicholas Goche announced he had no problem doing business with Mbada, and that buildings were “paid for” by giving the diamond company land at the airport.

“My ministry had no reservations with granting Mbada Diamonds space at Harare International Airport to carry out its commercial activities,” Goche declared, while Mhlanga said the move was all about “protecting” the diamonds. But political analysts and economists say that the move is to add to the shroud of secrecy that cloaks Mhlanga’s empire.

Meanwhile, AFP reports that the country’s finance minister, Tendai Biti, was pulling his hair out and begging diamond companies to deposit funds in the national treasury so that the government could fund the referendum on the constitution.

Biti told AFP that total diamond sales for 2012 amounted to $800 million, but that the state had received a scant $45 million so far, and that diamond companies owed the state more than that in taxes alone. “I will be appealing to both the president and prime minister to make these companies pay. We are beginning to lose our patience. It is irresponsible and unpatriotic and a breach of our laws,” Biti exclaimed, calling the actions of companies like Mhlanga’s “criminal”.

Despite this, and as Zimbabweans were readying to hit the ballots, the ANC echoed its support of Mugabe’s Zanu-PF. ANC spokesperson Keith Khoza told Mail & Guardian: “Zanu-PF has been governing Zimbabwe since 1980, and we feel they have gained the necessary experience and wealth of knowledge over that time to benefit the people of that country and govern again.” The investigative weekly reports that in late 2011, Gwede Mantashe, the ANC’s secretary general told Mugabe loyalists at a party conference in Bulawayo that the congress would support Zanu-PF’s “mission to retain power”.

Ballots are now being counted in Zimbabwe to see if the country will adopt a more progressive constitution. “I want a positive outcome because the country will change, life will change, and things will improve. Everything in Zimbabwe has been in decline – the education has gone downhill with the economy and social services – because of Mugabe’s rule. Hopefully a new constitution will bring a stronger democracy and we can be free – it is important for a person to be free in their own country,” Mavanyana tells Daily Maverick.

Will Mavanyana ever be able to go back to a Zimbabwe that creates wealth, value and delivers sound social services to its electorate, a country where he won’t feel like an outsider – that he can call home? As long as ‘leaders’ and their business associates are stripping Zimbabwe of its resources, it seems unlikely. DM