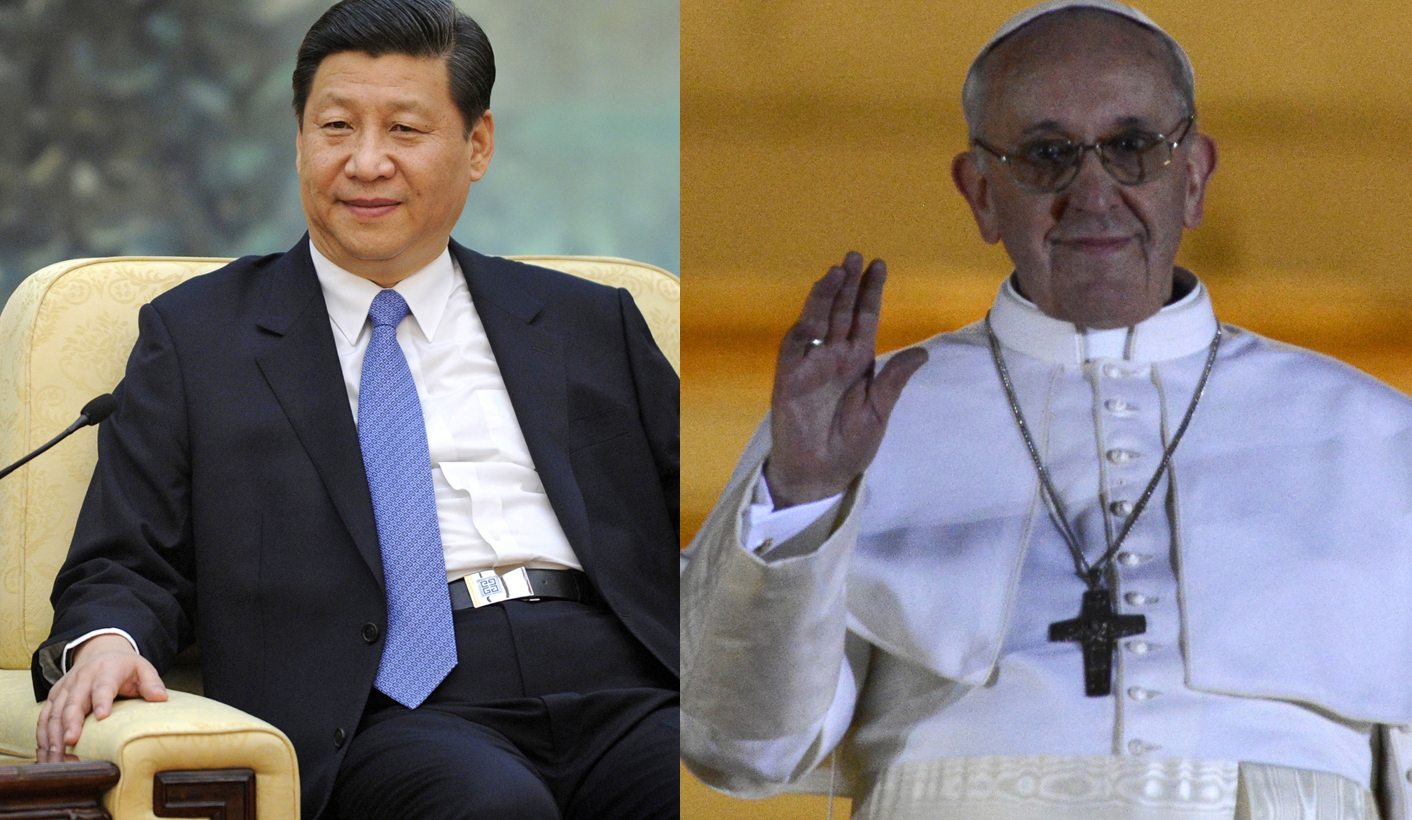 While all eyes were on chimney in Rome, another major power shift was happening in another ancient capital, Beijing. Collectively, the two events could impact the lives of 2.5 billion people, and there are a few strange parallels between them. SIMON ALLISON takes the chance to ponder which new leader would win in a bare knuckle fist fight for the future of the modern world.

Beijing and the Vatican City are about as far away from each other as it is possible to get in this globalised world of ours. The two cities, both capitals (actual or religious) to vast chunks of this planet’s population, are poles apart geographically, diplomatically, philosophically, politically and even culinarily.

And yet, over the past couple of days, they’ve both been going through remarkably similar processes. In a grand, ceremonial building (The Great Hall of the People and the Sistine Chapel, respectively), the future of approximately one-fifth of the world (1.3 billion Chinese, 1.2 billion Catholics) was being determined by a tiny, unrepresentative sample of that population (the National People’s Congress and the College of Cardinals) while adoring crowds waited outside in a huge, historic public space (Tiananmen Square and St Peter’s Square).

The result of these processes was, of course, the appointment of two of the most influential men in the world: new Chinese President Xi Jinping, and new Pope Francis (Popes, incidentally, are cool enough to go by one name. Like Ronaldo, or Madonna).

Before we get down to business, it’s worth taking a small diversion to marvel at the near complete lack of transparency, democratic values or gender equality which accompanied the selection of these two global heavyweights. In China, the new president was confirmed by the most pliant legislative body east of our very own rubber-stamp specialists, the National Council of Provinces. Essentially, the National People’s Congress exists to nod their heads whenever the China Communist Party tells them to. In that sense, it doesn’t really matter that there is but a smattering of ethnic diversity in the council’s ranks and just the few token female representatives. A few men in suits told another few men in suits to select one particular man in a suit. And they did.

The papal selection process is more competitive, but not much more representative. Another bunch of men, most of them white, most of them European, gathered together to slug it out between themselves for the privilege of putting on that great big pope’s hat. No women were eligible, and even though a landmark decision was made to place a South American (of Italian extract, obviously) at the head of God’s earthly table, it’s still a blatantly obvious example of tiny elites keeping power within their own ranks. In defence of the College of Cardinals, their outlandish red robes and skull caps made a far more colourful spectacle (just be patient, cardinals; everything comes back into fashion eventually).

So this is where we are, as a global society. Two leaders representing two-fifths of the world (that’s 2.5 billion people) are chosen by a few privileged men. Age of Enlightenment this is not.

The two new leaders do, however, represent two very different kinds of power, and it’s interesting to ponder which is more influential in the modern world. Interesting and relevant, because the two institutions they represent have diametrically opposed views of the ideal future; a difference which manifests itself at its most very basic in China’s official intolerance of any form of religion.

Let’s take China first. Its influence is very much of this world, and in terms we can grasp without too much trouble: money, people, soldiers, tanks, nuclear weapons. It is a military force to be reckoned with – the second largest in the world – although we’d recommend not reckoning with them if at all possible. Economically, it is a powerhouse, with a swiftly growing GDP, a healthy foreign currency surplus and monster investments in countries all over the world. China has a veto on the United Nations Security Council, and its foreign policy is a factor in the geopolitical calculations of every strategist in the world. China is a superpower, able to influence and at times dictate global politics, and looks to be getting stronger every year.

The pope can’t compete in this arena. His army amounts to a decorative force of Swiss Army guards in those absurd uniforms, designed by Michelangelo himself to provide effective camouflage for battles fought in peacock sanctuaries (he’s also supposed to have an invincible army of angels by his side, but we’re not convinced they’re real). The Vatican has a lot of money, as far as religions institutions and even some major corporations go, but it’s hardly on the same page as a major industrial country.

The pope’s influence is not political or economic, but it is perhaps more pervasive: it is social. The new pope, like all of his predecessors before him, is against such things as gay rights and abortion. This attitude, along with plenty of other positions both good and bad held by the Catholic Church, has coloured the policies of countries all over the world where there is a significant Catholic presence, and there are a lot of them: Catholicism is the most widely practiced religion, and the Catholic Church the largest single religious institution. The pope might not have a veto on the security council, but chances are he’ll win the global battle for hearts and minds – he does, after all, speak for God, and a lot of people find God very persuasive (even if He’s a bit socially regressive at times).

China, for all its military and economic might, can’t match the pope’s soft power, his influence on the way individuals think and act. This is something Chinese officials are very conscious of, and are trying to rectify with expensive programmes designed to improve China’s image and export Chinese culture to the world (take the proliferation of Confucius Institutes, for example, or the vast government scholarship programme). Yes, China’s president – in conjunction with his Politburo – can set the agenda for 1.3 billion people, but their social impact is still not felt far beyond China’s borders.

So, which one of these two men will have a greater influence on the world’s future? I’m going to go with Mao Zedong on this one, a man who himself knew a few things about power and who President Xi might find it difficult to contradict. “Ideas,” he said, “Turn into a material force which changes society and changes the world.” Round one to the pope. DM