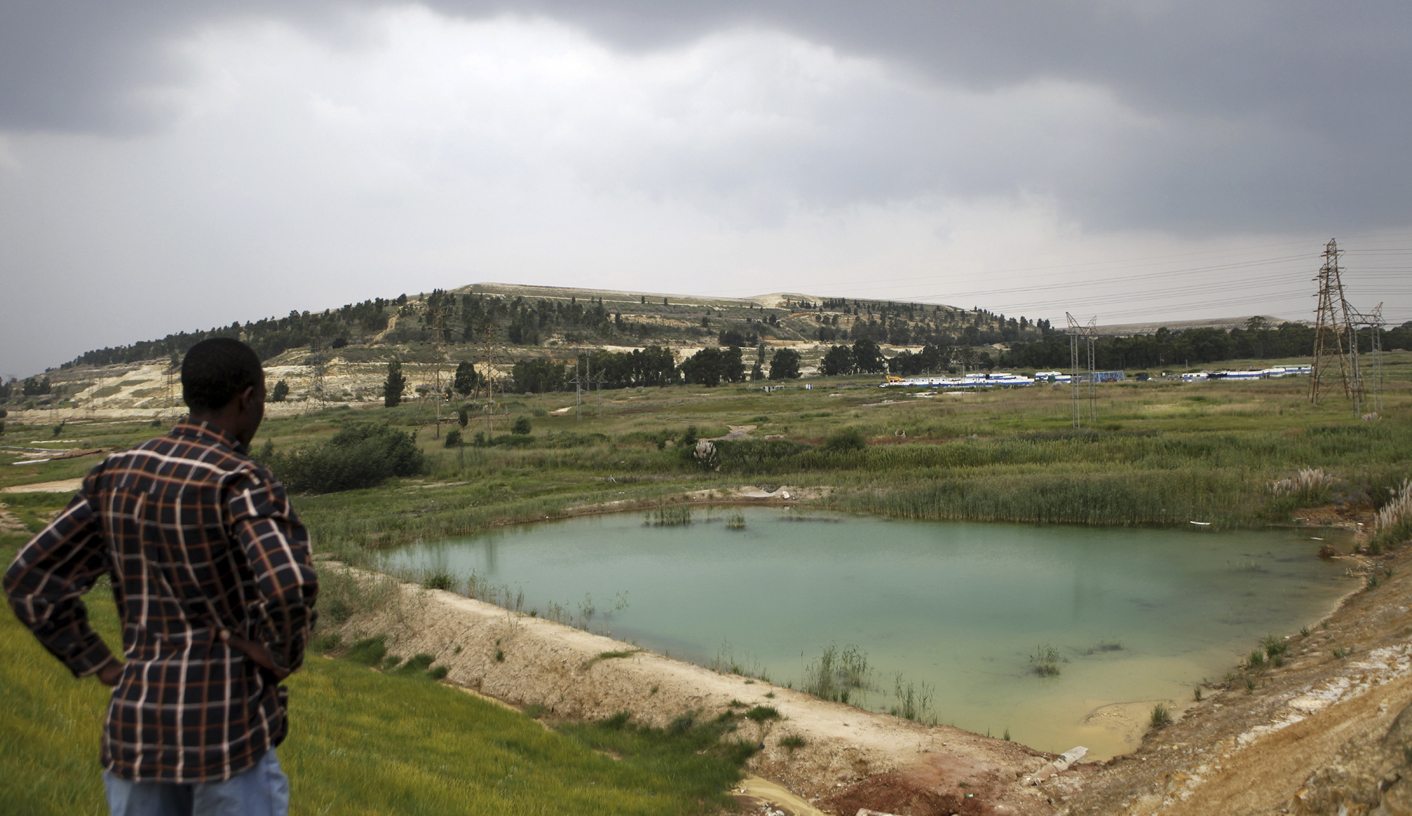 More than two years since government started to care about acid mine drainage, it has been working with key stakeholders to address the ugly sludge of an issue. The response, however, has only scratched the surface while creating other problems, such as putting the river systems at enormous risk. Though the issue might be water and how long we can use it for, the solution is money and a plan. By GREG NICOLSON.

Department of Water Affairs spokesman Sputnik Ratau on Thursday distanced himself from reports claiming mining companies responsible for acid mine drainage dating back to the early 1900s could be criminally charged for causing the problems in Gauteng. Ratau said the long-term feasibility plan that is to be submitted to Water and Environmental Affairs Minister Edna Molewa is still being finalised and the department is considering a range of solutions to rising acidity in the water caused by abandoned mine shafts.

“In the report – which is part of a long-term solution to acid mine drainage – officials have tried to trace the ownership of mines in the area up until the 1940s. The goal is to determine who is responsible for polluting the water in the area and to what extent they can be held liable,” reported The Times on Thursday. Ratau said at this stage it was not known what the report will recommend and called the article “not true” and “incorrect”. The spokesman said half of the work the department is doing concerns establishing partnerships with mining companies and other stakeholders to arrest the crisis.

After decades of reports and warnings from the Chamber of Mines and others, the government finally acknowledged acid mine drainage was a serious issue when it appointed a team of experts to investigate the problem in 2010. In 2002, acid mine drainage started pouring out from an abandoned mine near Krugesdorp and spilling out from mines across the area at a rate of about 15 million litres a day. When the task team finally submitted its report it warned of contaminated groundwater used for human consumption and agriculture, flooding of underground infrastructure, increased seismic activity, serious geological impacts, harm to the river system and local flooding.

“There is work ongoing and we are not waiting for the long-term strategy,” Ratau told Daily Maverick on Thursday. He addressed the three most concerning areas – the Western, Central and Eastern basins. The approach to the Western Basin problem has gone “quite well”, with most of the heavy metals in the water having been taken out. He said the partnership with Central Rand Gold (CRG) has helped and water is being pumped out of the unused mines to keep the situation stable. In the Central Basin, he said there is no discharge but agreements are in place to establish pumping stations which should begin operating in November. In the Eastern Basin, Ratau said there is no threat.

A recent CRG statement, however, shows that acid mine drainage in the Central Basin remains a problem. “The crisis for CRG is that while other parties are mainly interested in maintaining water levels below environmentally prudent levels, there is still some time before these are reached. CRG’s current and future workings are below that level and are already threatened,” it read. “There is much to be done to close the gap between the general commitments of the South African government and the company’s specific needs. Whilst there is no doubt that this will all be resolved, everything depends on the timing, which is disappointingly uncertain. In the face of these uncertainties concerning depth, the normal response of a mining company would be to maximise development and mining in the upper levels.”

Mariette Liefferink, CEO of the Federation for a Sustainable Environment and one of the leading activists who got the issue on the government agenda, said it was “heartening” that the state finally took notice of acid mine drainage but she is disappointed with its “knee-jerk” reaction. She said the focus so far has been on neutralising the water of contaminated metals but, despite tens of millions of litres of water being pumped into the river system each day, there’s been no environmental risk impact study completed on the effects of releasing the water.

Liefferink said the government has to some extent addressed the issue but she remains “very concerned” that there has been no alternative offered to pumping and treating the water to maintain the water levels, no public participation and no risk assessment done while the government addressed the issue. She said there needed to be a two-stage response: firstly, focus on neutralising the high-density sludge; secondly, remove the sulphur from the water. The first is being completed but the second has so far been ignored because of a lack of funds, Liefferink said.

In the Federation for a Sustainable Environment’s appeal to the courts to prompt the Department of Water Affairs to conduct a risk assessment, it stated its concern about the high levels of salt being deposited into the river systems, claiming that 30-million litres of neutralised acid mine drainage water will release about 70 tons of salt into the Tweelopiespruit a day and 500 tons of salt a day into the Vaal River system. Liefferink said that unless there is a desalination process by 2014 the Vaal and Orange river systems would be so significantly harmed that the mining, agriculture and energy industries will suffer immensely.

She said the response from government has thus far been “laudable, praiseworthy” but said, “There are too many gaps in this process.” Liefferink is part of the long-term feasibility plan team, but is not confident it will be able to arrest the crisis that’s developing. She said she had not seen the draft report yet and questioned why the media got the information before her. Funding, however, is the key issue.

“The planned expenditure on AMD (acid mine drainage) from the 2013 budget is R150 million. This is short of the R30 billion estimated by the auditor general in 2009,” said Deon Nel, the head of the World Wildlife Fund’s South Africa biodiversity unit in response to Finance Minister Pravin Gordhan’s budget, to The Mercury. “There are currently nearly 6,000 derelict mines in the country. The longer we wait to address this issue, the more it is going to cost the South African taxpayer in the long term.”

The long-term feasibility study is expected to be completed in June and will likely consider taking mining companies to court, if not for any other reason than that there is simply not enough money being allocated in the state’s budget to fully address the issue of acid mine drainage. The government’s response has tackled the surface, but like all issues relating to mining in South Africa, the problems run long and deep. DM

Photo: A man looks at acidic water flowing from the old mines in Riverlea, south of Johannesburg, February 8, 2011. Johannesburg may soon start being eaten away by acidic water flowing from the mines that created its astronomical fortunes. Mines dug more than a century ago stretching about 40 kms (25 miles) along one of the world’s largest gold deposits have reached their water storage limit and will start leaking a toxic cocktail of chemicals in the coming months, independent experts and government have said. REUTERS/Siphiwe Sibeko