The Israeli-Palestinian conflict, now at a university n...

The Israeli-Palestinian conflict, now at a university near you 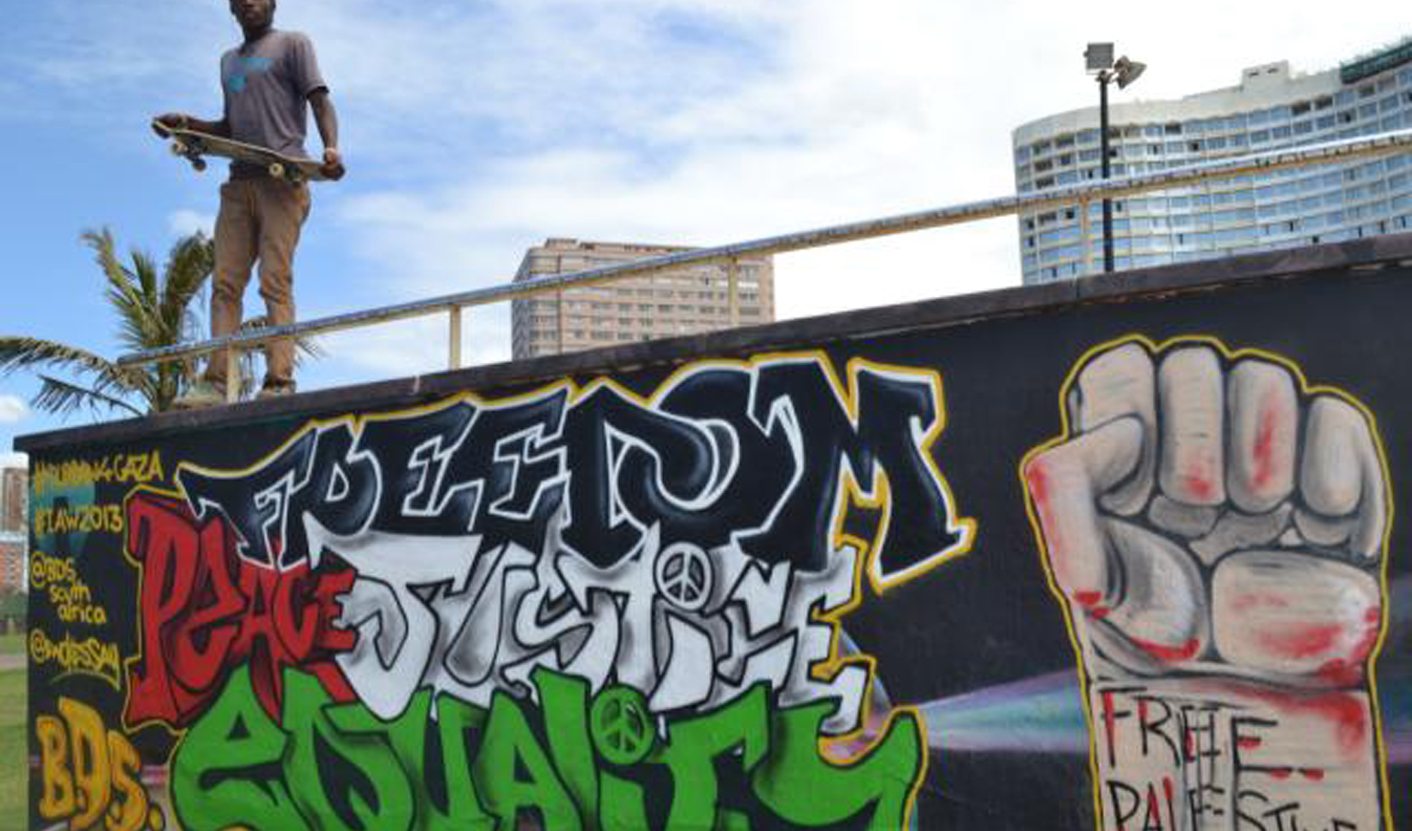 Universities across the country are commemorating “Israeli Apartheid Week” this week. Organisers say it is an opportunity to draw attention to the human rights violations endemic to the conflict in the Middle East. In Durban, however, observance of Israeli Apartheid Week has turned sour as activists accuse the Democratic Alliance of obstructing free speech. By KHADIJA PATEL.

“There will be no attempt to get the mural removed, and the DA supports freedom of expression. [The] councillor supports this freedom,” Democratic Alliance leader Helen Zille said on Monday, after activists in Durban had responded with fury to the DA councillor’s stated opposition to graffiti artwork linked to the observation of Israeli Apartheid Week in Durban.

The councillor, Avrille Coen, told the Durban-based Daily News the graffiti at the Durban skate park was offensive.

“What proof do they have that Israel is an Apartheid state?

“This painting is telling half of the story of what is happening in the Middle East.”

She said that last year, the same illustration created similar controversy and had to be removed by the municipality.

“We can’t have a painting in a public space like a beach that is so offensive to people of Jewish background.

“This is hate speech, calling a democratic country like Israel, which has people of Palestinian descent in parliament, an Apartheid state.

“The painting must be removed,” she said.

Khadeeja Manjra, an activist from the University of Kwazulu-Natal, said Coen was called to the skate park after a passer-by complained to Metro police officers. Coen made her remarks at the park, in the presence of journalists.

The DA in Kwazulu-Natal sought to distance the party from the councillor’s remarks.

“As the Democratic Alliance, we will not get involved with this dispute and will not take any action, which will favour either side and regret the controversy that this matter has captured,” Hanif Hoosen, the DA’s chairman in Kwazulu-Natal, said in a letter to the South African Muslim Network (Samnet).

And yet on Tuesday afternoon, the wall hosting the mural had been repainted. The mural had disappeared under a coat of black paint.

Photo: A mural painted by Ewok for IAW 2013 at the Durban North Beach Skate park, repainted.

Coen told Daily Maverick she knew “not a thing” about the repainting of the wall.

“It was definitely not from me or the municipality,” she said.

While it is unclear who exactly is responsible for blacking out the mural, the controversy over the mural does expose the highly charged atmosphere around the observance of Israeli Apartheid Week in South Africa.

The South African Union of Jewish Students (SAUJS) has been particularly vociferous in its criticism of the observance of Israeli Apartheid Week in South African academic institutions.

“A one-sided and extreme viewpoint has been communicated to students on campus about the Israeli-Arab conflict, the prototype being Israel Apartheid Week,” the national political/liaison officer for SAUJS, Harry Hoshovsky, said in a statement last week.

“By framing the Israeli-Arab narrative in controversial and extreme terms, the end result is that an incredibly complex political conflict has been reduced to a simplistic paradigm where Israelis have been labelled solely as aggressors and Palestinians exclusively as victims.”

Israeli Apartheid Week, held in South Africa this year from 11-17 March, is an annual series of lectures, rallies and documentary screenings dealing with the conflict held in academic instructions across the world. Activists say the aim of Israeli Apartheid Week is to educate people about the nature of Israel as an Apartheid system and then build support for the Boycott, Divestment and Sanctions (BDS) campaign against Israel.

Israeli Apartheid Week was first held in Toronto in 2005 and has since been held in academic institutions across the world.

“We wanted to inform students about a forgotten and largely ignored chapter of Jewish history – namely the forced expulsion of 850,000 Jewish refugees from nine Arab countries after Israeli independence in 1948,” Hoshovsky says.

Irene Calis, a Palestinian activist and a visiting lecturer in the Department of Political and International Studies at Rhodes University, believes invocations of Jewish history in campaigns countering Israeli Apartheid Week miss the point.

“This is not about Jewish history,” she said. “This is about structural issues surrounding the [Israeli-Palestinian situation].”

“No one in the movement would deny the persecution of Jewish people in history but this does not detract from the current suffering of Palestinians,” she said.

“One has to draw a distinction between anti-Semitism and criticism of human rights violations by a state,” she says.

Calis believes that the observance of Israeli Apartheid Week around the world is not a mere commemoration but a “political awareness campaign”.

“It’s about making connections between the political processes and the social conditions,” she says.

“The aim here is to draw attention to the structural, systematic policies of the state [of Israel] and not the Jewish people.”

Calis believes it is crucial to reframe an understanding of what is happening between Israelis and Palestinians as a “human issue”. She calls for a sense of humanity to be brought back into conversations about the conflict in the Middle East.

The effects of activism in South African academic institutions on either side of the conflict will, however, not be restricted to this week.

On Tuesday, Dr Salim Vally, director of the Centre for Education Rights and Transformation at the University of Johannesburg, and a prominent Palestinian solidarity activist, was denied entry to the West Bank by Israeli security forces.

Vally was invited by the Friedrich Ebert Stiftung, a German foundation, to deliver a series of lectures in the West Bank focusing on the right to education and curriculum development. He left Amman, Jordan, this morning on his way to Palestine but was stopped at the border and detained for five hours by Israeli border security where he is reported to have been “interrogated, body-searched and humiliated before being ejected back to Jordan”.

“The most painful thing about the whole episode,” Vally said in a statement released by the Palestinian Solidarity Committee on Tuesday night, “was to witness the manner in which Palestinians returning to their homes – many older than my parents – were mistreated, harassed and humiliated by teenagers young enough to be their grandchildren. Even if I had wanted to, I could not prevent memories of the Apartheid days overwhelming me with a vengeance.” DM

Main photo: A mural painted by Ewok for IAW 2013 at the Durban North Beach Skate park, before it was repainted.