Among School Children in the Transkei

Among School Children in the Transkei 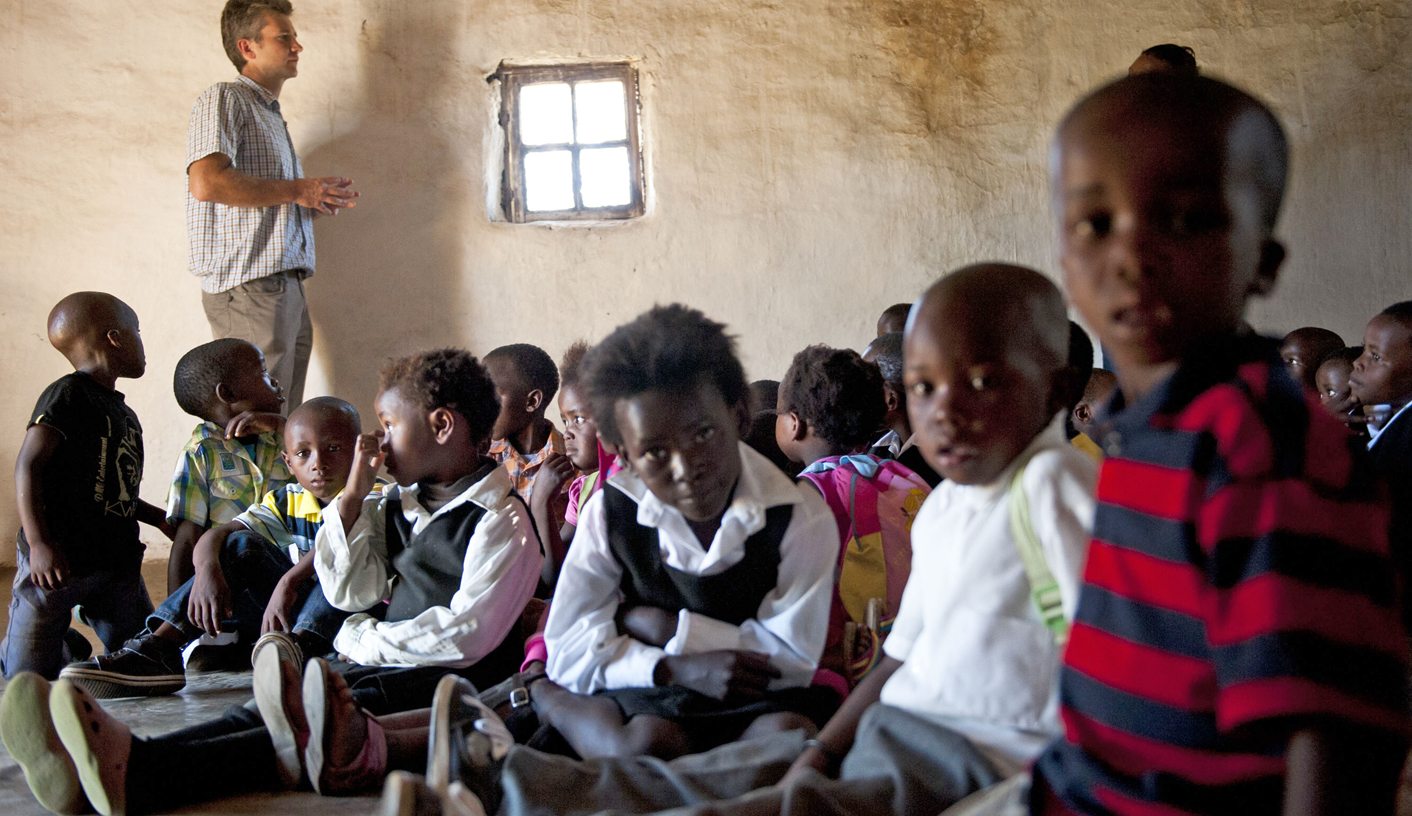 In the last week of February 2013, I and other lawyers and volunteers at the Legal Resources Centre (LRC) in Grahamstown conducted a tour of 11 rural schools in the Transkei, where we witnessed first-hand the harsh reality faced daily by thousands of learners in the region. Each school invariably presented us with a depressing cocktail of all or a number of the following problems: a lack of basic furniture, intolerably overcrowded classrooms, crumbling buildings, teacher shortages, and filthy or non-existent toilet facilities. By ARAVIND GANESH.

At Samson Senior Primary School in Libode District, we found that the local community had abandoned the dilapidated mud buildings that were perched on a hilltop far away from the children’s homes. Instead, the school had taken up residence in community-built church buildings and unused rondavels in the village, where there was precious little lighting and few desks or chairs. If it rained, the school would close. This was preferable, said the parents of the learners, to sending their children on a daily expedition to the old school building where they might be injured or raped on the way, or to a school in another village where they would be bullied as outsiders.

At Gwebityala Senior Secondary School, Dutywa District, the LRC found classrooms so completely bulging at the seams with learners that there was no space for desks. In the Grade 12 classroom, there were 72 learners. In Grade 11, there were 94. The Grade 10 classroom housed a breathtaking 167 learners. In addition, although the school was supposed to have been allocated ten educators, there were only nine present, six of whom held temporary posts. None of the temporary educators had received a salary this year.

The LRC found similar problems at Gengqe Senior Secondary School in Mthatha District, which had seen the number of teachers allocated to it drop from 16 in 2012 to eight this year, a reduction which forced the remaining teachers to stop offering certain subjects and to teach for up to 10 periods a day instead of the standard seven periods. As for the provision of basic furniture, the principal informed us that he had had to break up a fight between four girls over a desk minutes before we arrived. Naturally, the impact of these factors was reflected in the matric pass rates that had plummeted from 82% in 2010 to 34% in 2012.

In nearly all the schools we visited, new toilets were desperately needed to replace the rudimentary latrines that were so filthy and repulsive that the students would rather relieve themselves in the bushes. In addition, the vast majority of the schools we encountered had not been informed about a furniture audit and verification exercise that the EC Department of Basic Education was supposed to have completed by February 28, 2013. This was despite the fact that the Department was ordered by the Mthatha High Court in November 2012 to publish and distribute a circular to all schools in the province informing them of the audit by 16 January 2013.

It is difficult to imagine the damage that has been and continues to be done to these learners as a result of these conditions. A simultaneous algebraic equation is already a rather intimidating and unsympathetic thing, but how much harder must it be to solve, if your “desk” consists of a couple of planks scattered promiscuously across some metal tubing? Or if you have a crate for a chair? Leave aside for the moment these and other harms the children will comprehend only in the future. What must it be like – in the here and now – for a young female learner to have to search out a spot in the long grass, suitably far away from teenage boys, every time she needs to go to the bathroom?

Although the words have been much cheapened by flabby and careless overuse, this is, at bottom, about human dignity. The LRC is, for its part, doing its best to ensure respect for the learners’ dignity by bringing more litigation, demanding that all schools are on publicly available lists which are then are publicised for public scrutiny, and calling for emergency interim measures such as prefabricated classrooms and toilets while permanent structures are being built. However, we recognize that litigation is not and cannot provide a panacaea for all the province’s ills – government by lawsuit is not a sustainable solution.

W.B. Yeats once described a school inspection he made as an elderly Irish senator in a celebrated poem entitled “Among School Children”. In the poem, Yeats wondered if his mother, seeing her son “with sixty or more winters” on his head, would consider his life and accomplishments “a compensation for the pang of his birth, or the uncertainty of his setting forth.” Yeats ended the poem with a reflection on how the success of his life – his dignity – was inextricably linked with the experiences and frustrations of his youth:

How can we know the dancer from the dance?”

One cannot help but wonder about the “uncertainties of setting forth” that will greet the lovely and impeccably well-spoken children we met, and whether the education they are currently receiving is doing anything to prepare them to meet those challenges. We have a duty to those children to equip them to make of their lives as brilliant a dance as can possibly be. In that respect, the measures taken so far by the provincial government have been an abject failure. DM

* Aravind Ganesh is a Volunteer Lawyer at the Legal Resources Center, Grahamstown

All photographs courtesy of Madelene Cronje of Mail and Guardian.