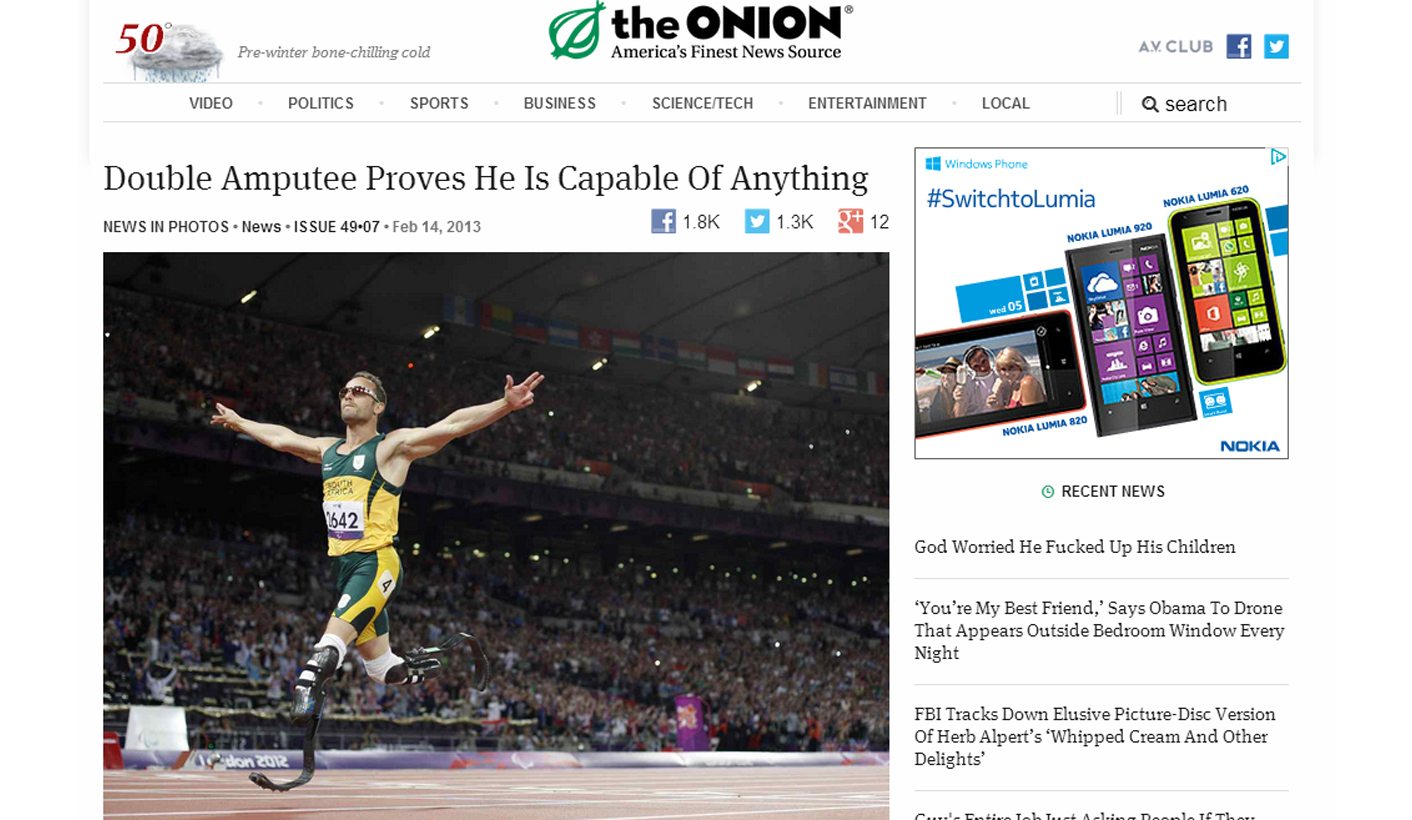 The US satirical publication that calls itself “America’s finest news source” caused a major upset recently when it called nine-year-old Quvenzhané Wallisa a word that rhymes with bunt. The world collectively winced, but is its coverage of the Oscar Pistorius murder just as sick, or is it slick satire? MANDY DE WAAL weighs in with local humourists.

“Let’s Talk About How Fast I Can Run,” harangues a column above a photograph of a sort-of-smiling Oscar Pistorius. The sub-text appears to plead: “Enough with the murder drama and violence against women publicity and all those other downer headlines; let’s chat about something more positive like my ability to dash double-time on blades or overcome adversity.”

Featured in The Onion, the column sits alongside an article from a father-figure of a God blathering regretfully about how absent he was during mankind’s formative years, and a photo of US president Obama looking adoringly at a drone parked outside his bedroom window. There’s also a video report that declares that the US nation agrees – “Justin Bieber’s inevitable meltdown could be interesting to watch”.

The world-famous gold medalist, out on bail after being charged with the premeditated murder of his girlfriend Reeva Steenkamp, has provided ample fodder for the US-based news satire operation. The Onion was parodying Pistorius long before he was charged with the murder of Steenkamp.

A profile on the sprinter – who has dominated both able-bodied and Paralympic events – says that Pistorius “has been taking steroids openly since 2009, but no one has the heart to disqualify him” and that “Pistorius’ childhood doctor, Gerry Versfeld, is really good at amputating little boys’ legs and enjoys it very much.” A 2008 sports piece states: “Olympic Runners Feeling Stupid For Cutting Off Legs Before Finding Out About Prosthetic Ban”.

But on Valentine’s Day 2013, The Onion’s writers sharpened their quills to draw blood and broke the Pistorius story with: “Double Amputee Proves He Is Capable Of Anything”. This was followed by a rapid slew of stories featuring The Onion’s usual double punch headers which pack the set up and the climax of the joke into the titles – “Oscar Pistorius Swears Bloody Cricket Bat From Different Murder”; “Burglar Hiding In Pistorius’ Bathroom Figures Now Probably His Best Chance To Escape”; and “Funeral Held For Door Shot 4 Times By Oscar Pistorius.”

“Recently I’ve begun to wonder if The Onion might be starting to disappear up its own arsehole, making the mistake of thinking that ‘edgy’ laughs are valid satire. The Pistorius stories have just been foul,” says Tom Eaton, founder and lead writer of the ground-breaking (but now defunct) satire site, Hayibo.

“I think I know why they thought it was a good idea: the OJ Simpson trial dragged the US into a new and ugly space, a space that still needs to be satirised, and I suspect The Onion people felt that they were back in that space. But they unwittingly became part of that news cycle themselves. And of course, like the media they love slagging off, they trampled merrily all over the grief of real people who never wanted to be news fodder. Perhaps they were even worse than straight news networks, because they were exploiting Reeva Steenkamp’s death for comedic purposes rather than to inform,” says Eaton.

Author and sometime satirical writer, Gus Silber, says that The Onion’s Pistorius headlines have been sharp and savage. “They reveal the extent to which Pistorius has become a punchline in global media. We’re more circumspect in SA, for obvious reasons, but there has been no holding back across the waters. I read these sorts of things with a wince. It’s a myth that you have to laugh at satire. If it just makes you think and rethink, that’s often enough.”

Pushing boundaries is what great satire does best, but The Onion was widely attacked a couple of weeks ago when one of its tweets on the Oscars went well beyond the limits of social acceptance. The stage was The Academy Awards, and Seth MacFarlane, the so-so but smug host of Hollywood’s big backslapping affair, had just cracked a crude joke about 9-year-old Quvenzhané Wallis, nominated for “Beasts of the Southern Wild.” MacFarlane jibed: “To give you an idea how young she is, it’ll be sixteen years before she’s too old for (George) Clooney,” as the audience winced.

The Onion picked up the baton on Twitter, but didn’t run with it. Instead it fell flat and squirmed as the world expressed its outrage to the satirists’ tweet which read: “Everyone else seems afraid to say it, but that Quvenzhané Wallis is kind of a cunt, right? #Oscars2013.”

“Calling a little girl a cunt is not clever, smart, witty or anything like that,” says stand-up comedian Melt Sieberhagen. “If they wanted to make a point about the girl looking a bit smug every time the camera was on her, I reckon there might have been a multitude of different ways (like maybe saying she seems to be auditioning for a part in Million Dollar Baby 2 or something like that). Calling a little girl a cunt is just not funny – to me, at least, and seemingly also to most of the rest of the world,” he says.

Eaton agrees. “I don’t know of the Twitter fiasco was a genuine attempt at satire – to me it smelled like a drunken Tweet,” he says before explaining the difference between parody that engages the absurd and tests the boundaries to make a point, and a pathetic low blow. Eaton states that wit works as a weapon to make a point if it pushes the boundaries of what the patriarchy or political hegemony dictates.

“However, a lot of young comics are growing up confusing offensiveness with activism. They’re insulting people – often, powerless or misunderstood people – and misinterpreting the outrage or nervous giggles as having struck a blow against ‘The Man’. Basically, you’ve got a lot of middle-class boys (and a few girls) finding witty ways to say cruel things to other middle-class boys (and a lot of girls), and thinking that simply articulating these things makes them Che Guevara or Malcolm X. As for which lines shouldn’t be crossed, with Hayibo I had a simple rule: don’t make fun of people’s pain. Generally that meant staying away from celebrity deaths,” Eaton says.

Silber says he’s not sure whether The Onion’s tweet bombed. “The whole fuss broke out, and people with pitchforks and blazing torches were hounding The Onion out of town, but I’m not sure whether that tweet actually bombed. It certainly succeeded in making people think about the limits of satire and free expression, and the bizarre spectacle of bitchiness and self-congratulation that is the Oscars. Of course it was cruel and thoughtless and stupid, but then that was the very point of it,” the best-selling author says.

But The Onion saw the lynch mob coming from far off and hurried a hasty apology on Facebook. “On behalf of The Onion, I offer my personal apology to Quvenzhané Wallis and the Academy of Motion Picture Arts and Sciences for the tweet that was circulated last night during the Oscars,” wrote Steve Hannah, the parody operation’s chief executive. “It was crude and offensive — not to mention inconsistent with The Onion’s commitment to parody and satire, however biting.”

It is the apology that Silber thought was off. “The only thing a satirist should never do is apologise for offending anybody, because no matter how hard they may try, the apology will always sound more offensive than the original offence. Leave the apologising to the politicians. They’ve got a lot more to be sorry about,” says Silber. But then who draws the boundaries of what taboo and what’s acceptable when it comes to ridicule that’s intended to expose or deride?

“It is the job of the audience, not the satirist, to draw the boundary-lines and decide what makes them feel offended. This then gives the satirist a useful springboard from which to attempt to outdo their offensiveness next time round,” Silber points out.

A modest Eaton says satire’s subjective and adds he’s got it wrong often enough to know that ultimately, good satire is anything that makes people question their own assumptions. “In terms of personal taste, I think the difference is one of intelligence, a range of references, and pace of delivery. If I’m struggling to keep up, but hugely exhilarated by what I’m hearing or reading, then I know I’m in the presence of something really good. If the jokes are landing like water balloons, and I’m looking at my watch and planning my shopping list, then that is piss-poor satire for me.”

The screenwriter and best-selling author of the spoof The De Villiers Code explains that satire is always a weapon, because its primary purpose is to ridicule. “Northrop Frye (one of the most influential critics of the 20th century) said that in satire, irony is militant. For me, this means that satire is only truly satire – rather than cruel comedy – when it attacks a dominant power. That might be a political or ideological system, or it might just be a particularly annoying zeitgeist. But it is a tricky line to tread,” says Eaton.

“Once you start aiming satire at people who are effectively powerless (even though they live in Dainfern and drive luxury tanks), you can easily step over the line into plain old-fashioned name-calling. When you go after the middle class – and the middle class NEEDS to be gone after, in the hope that it will slowly wake up – you must stay very conscious of your motives. Are you doing this because you feel it’s true, or are you jealous and bitter? It’s sometimes hard to know. I also think that a lot of people aren’t really sure what satire is, but use it as a justification for engaging in more ‘edgy’ (read ‘cruel’) kinds of humour.”

Says Sieberhagen, the Afrikaans comic who’s doing more and more work in English these days: “I think satire is only limited by how relevant it is. And then of course by the audience it is presented to. Unless it is just piss-poor, but then it stops being satire and just becomes kak jokes.”

Satire’s in the eye of the beholder, and while many felt that The Onion’s Quvenzhané Wallis tweet was vile, no less than David Carr, the media columnist for The New York Times thought it was brave. “Onion to writers: Tweet incredibly edgy, funny stuff. If you go over the line, we’ll just slide you under the bus,” Carr tweeted, after The Onion apologised. Perhaps there’s only one true edict when it comes to satire, then – never, ever say you’re sorry. DM