DRC coup plot: Rebels claim they have access to weapons stashed by ‘Merchant of Death’ 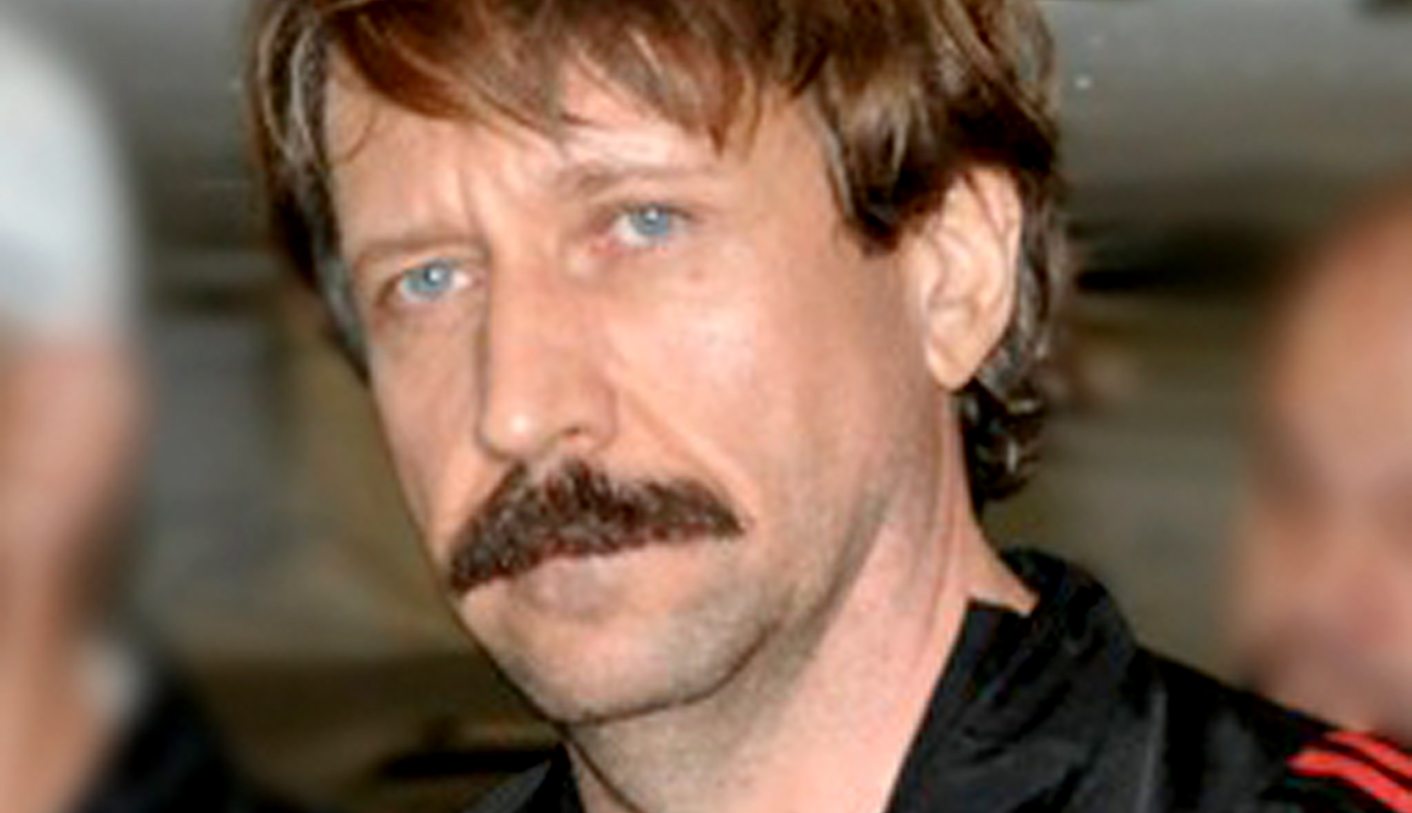 Echoes of the bloody legacy of one of the most notorious international dealers in weapons of war on the African continent – the former Red Army officer Victor Bout, also known as the “Merchant of Death” – rang through the Pretoria Magistrates’ Court on Monday in the bail hearing of 21 Congolese men charged with planning a coup against the government of the Democratic Republic of the Congo. In opposing bail, state prosecutor Shaun Abrahamson said members of the group had told undercover agents they have access to weapons arsenals stashed by Bout in the DRC. The weapons were shipped by Bout in the 1990s from Bulgaria and Romania to Hutu forces in the DRC who were fighting the government of Rwanda at the time, writes DE WET POTGIETER.

Reading from the statement of the investigating officer, Lieutenant-Colonel Noel Zeeman, state prosecutor Shaun Abrahamson yesterday spent the whole day in court meticulously pinpointing all the reasons for the state being determined to keep the 21 Congolese coup plotters behind bars.

He told magistrate Solly Mkhabela during the official bail application hearing that the ringleaders of the rebel group told agents they have 3,000 rebels deployed inside the DRC and a further 4,000 men in Rwanda and Uganda, as well as loyal supporters in other foreign countries including the United States,Canada and France.

Members of the rebel group also told agents they regarded the M23 group in the DRC as enemies being supported by the Ugandan government.

The alleged coup plotters were arrested last month in a raid on a game farm in Limpopo. The raid was the culmination of a six-month undercover operation by the South African Police Service’s crime intelligence counter-terrorism division, and was was executed with little fuss by members of the SAPS special task force, crime intelligence and the crimes against the state units (the Cats).

Abrahamson told the court the rebels were not interested in any negotiations with the government of President Joseph Kabila and were adamant that the president be arrested and stand trial. “If he was killed by a stray bullet, so be it,” the rebels told the undercover agents.

“A full scale war was their only solution,” said Abrahamson. “They wanted to take over the DRC within 90 days.”

In a startling revelation Abrahamson said the rebels knew where arsenals of weapons of war lay hidden in the Great Lakes area and intimated that they had access to arms caches of Viktor Bout.

Bout, a former Red Army lieutenant, was sentenced to 25 years in prison in 2012 in the United States, following his conviction on terrorism charges resulting from a US sting operation. He was arrested in Thailand five years ago, and held there until his extradition to the US for trial in late 2010.

The notorious arms smuggler rose to stardom a few years ago when Nicholas Cage played a character based him in the Hollywood movie, Lord of War. Although the producers never officially admitted that the movie was Bout’s life story, the biographical link was common knowledge.

Bout’s successes as an international arms smuggler resulted in close ties with the South African contraband market and it was one of his South African partners who hammered home the final nail in his coffin, sending him to jail last year.

The former Russian lieutenant became one of the world’s biggest dealers flying his ageing and battle-worn Soviet planes from one theatre of war to another, providing the armaments to fuel wars in places as far apart as Liberia and Afghanistan.

He did business with the US government, the Taliban, African warlords and even flew humanitarian relief flights for the UN to Somalia and to Sri Lanka after the 2004 tsunami.

He started off offering cheap flights to anybody prepared to pay – be it the Angolan government or Unita rebels, the Northern Alliance in Afghanistan or the Taliban harbouring al-Qaeda terrorists.

He even transported humanitarian supplies to the war zones where his weapons and attack helicopters were used in the same bloody conflicts.

It was in Africa that Bout built his aviation empire. After only eight years, by 2000 Bout had expanded his aerial armada from three to nearly 60 aircraft, operated under the guise of a massive array of shell companies.

In 1996 UN experts claimed Bout was shipping arms from Bulgaria and Romania to Hutu forces in the Democratic Republic of Congo (DRC) who were fighting the government in Rwanda. No action was taken because Bout’s activities were deemed extra-territorial.

Between 1997 and 1998, Air Cess shipped S$14 million of weapons from Bulgaria via Togo to Angolan rebel group Unita and the Liberian-backed Revolutionary United Front of Sierra Leone, violating UN embargoes.

More than 50,000 people died in the Sierra Leone conflict while the Angolan civil war claimed the lives of more than 500,000 people.

Expanding his operations in 1997, Bout registered a company called Air Pass in South Africa. Air Pass began operating in conjunction with Norse Air and Pietersburg Aviation Services and Systems, but later that year Bout transferred his base of operations to Swaziland. Bout’s African client list would eventually expand beyond Angola to include Cameroon, the Central African Republic and Sierra Leone.

Bout’s pilots knew how to evade radar, used false identification markings and observed radio silence, flying with their aircraft navigation lights turned off. African clients would set up temporary airstrips, deceiving American satellites by only cutting down underbrush to slightly below wing level rather than clear-cutting an identifiable runway for the rugged former Soviet military aircraft.

Bout’s pilots specialised in precise parachute cargo drops onto pre-arranged coordinates. For such services the money in the early 1990s was, in Russian terms, extraordinary.

In 1998, as South African authorities moved to indict Bout with 146 breaches of civil aviation regulations, he moved his operations to Swaziland. When authorities there subsequently grounded 43 of his aircraft because of inadequate documentation, the aircraft magically reappeared in Bangui in the Central African Republic.

In 2000 and 2001, Bout shuffled dozens of flights through South Africa using front companies.

After the December 2000 publication of two UN reports on African gun-running, many European diplomats expressed outrage during UN meetings that Bout was working so openly in Africa’s war zones, causing him yet again to relocate his Air Pass organisation.

A former South African spy, who is also a former business associate of Bout, described to the Daily Maverick business dealings with Bout and the South African wheeler and dealer who testified against him in the US.

Bout ran his international arms bazaar in the 90s from lavish offices in Sandhurst, Sandton (now the Chinese Consulate).

According to the former spy, he met Andrew Smulian, the main witness in the Bout trail, in the 1980s while he was the manager of Lanseria Airport, west of Johannesburg.

“Smulian had a long history of involvement in African conflicts and was also involved in the Biafra conflict arranging flights into the war zones,” the spy said.

“When I met him at Lanseria, he was also wheeling and dealing in various aircraft charter schemes as well as having deep interests in the weapons trade.”

At the time he got mixed up with another arms dealer, the Frenchman Jean-Bernard Lasnaud, whom he got to know under one of his various operational pseudonyms, François Laroche.

Lasnaud has been in the arms trafficking business since 1978 and was convicted in absentia in Belgium in May 1983 on charges of illegal arms dealing.

According to the spy, he used his wife as a front to set an arms company called Acromar in Johannesburg and through Smulian they managed to deal with Armscor, supplying specialist weapons to the then Transkei Defence Force’s controversial Special Forces unit, which was run by the late Charles Sebe.

Included in the deals were special sniper rifles fitted with silencers.

Through the connections of Smulian with Lasnaud (aka Laroche), Acromar proposed a deal with the French arms dealer to supply arms on behalf of Armscor for the conflict in Uruguay. The deal never went through.

When Bout moved his operations from Maputo to South Africa, Smulian started working for him as a kind of “Mr Fix-it”, sorting out problems with permits and visas relating to flying the huge cargo planes initially from Lanseria and later on from the Pietersburg air force base outside Polokwane.

A former business associate of Smulian in Tanzania, “Stonehunter”, told the Daily Maverick they started a diamond company, Dolorite Resources, in Tanzania in 2006.

“Smulian, whose nickname is Axel, introduced me to Viktor Bout,” said “Stonehunter”, who spoke on condition of anonymity. When they parted ways, Smulian left for the Dutch Antilles. “Stonehunter” last heard from Smulian two years ago when he phoned from Thailand saying that he was going to make big money because the “Russian” (Bout) was due to meet him in Thailand for a business deal.

That was the CIA sting operation that lured Bout to Thailand, the rest was history.

The bail hearing of the 21 rebels was postponed to 15 March. DM