Analysis: Somali’s new government is not Al-Shabaab, not yet 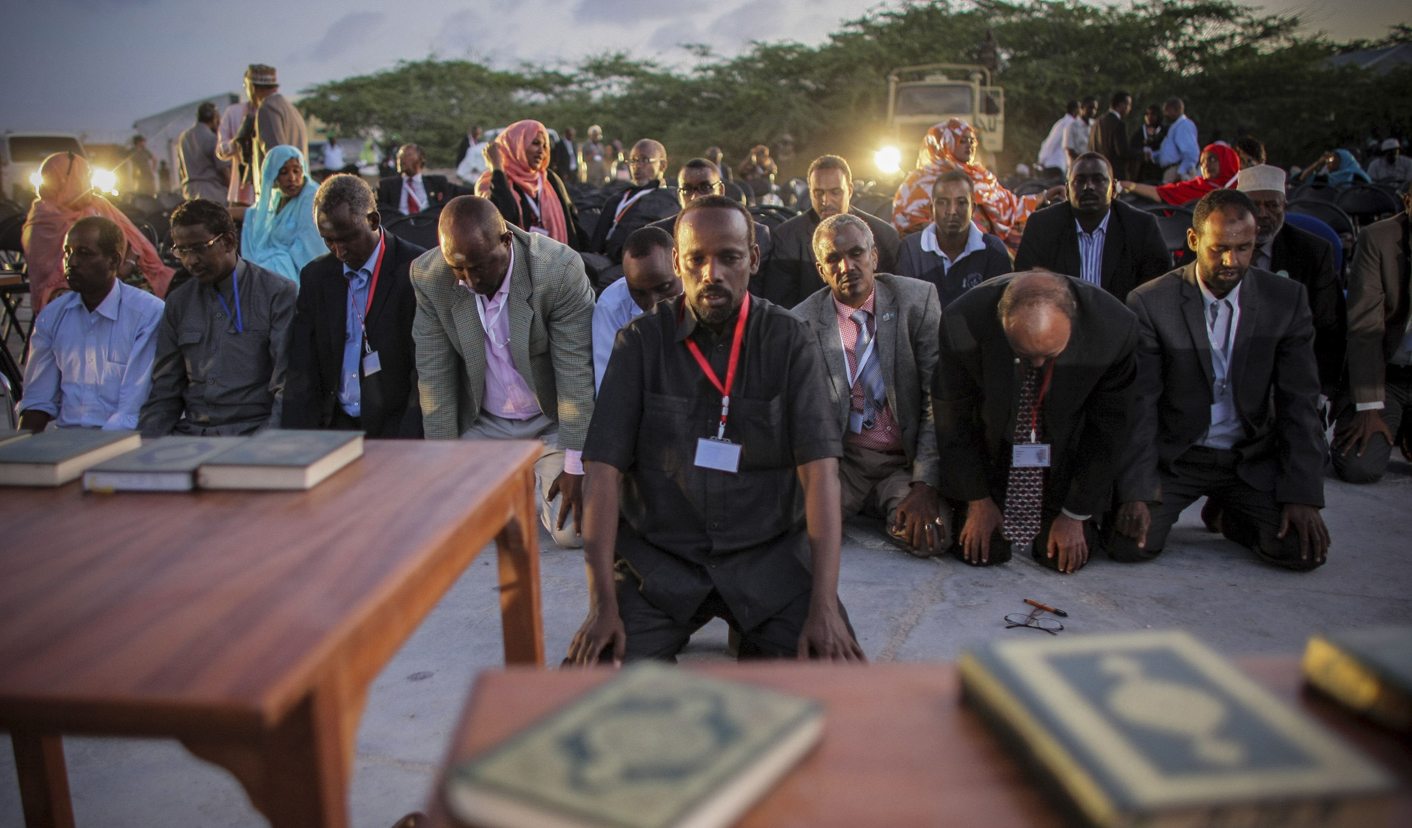 Recent coverage of Somalia has been dominated by the horrific case of a woman who was prosecuted and sexually assaulted after reporting her rape by government security forces to the police. Cynics are starting to wonder: is the new government any better than Al-Shabaab? SIMON ALLISON thinks it is too early to tell.

It’s hard to find anyone who’s too upset with Islamist militant group Al-Shabaab’s gradual but definite fall from power in Somalia. It was kicked out of its Kismayo stronghold last year by Kenyan troops, and slowly but surely the central, civilian government in Mogadishu has been restoring its tenuous authority over the country (some of it, at least). This is a long and complicated process, with plenty of setbacks along the way, but few argue with the central narrative: Islamist militants bad, vaguely democratic government good.

But sometimes the setbacks set Somalia so far back that even this broad narrative is called into question. Just ask the women who last month was given a year-long jail term after reporting that she was raped by security forces. Think that one through: she was jailed simply because she reported a rape. So much for women’s rights in the new Somalia.

Or the journalist, Abdiaziz Abdinur Ibrahim, who interviewed the woman about the rape. He didn’t even report the story, but he too was given a year-long jail term, because that’s what seems to happen in the post Al-Shabaab Somalia that everyone’s fought so hard to establish.

The details of their situation make for difficult reading for the Somali government’s many international supporters. According to Human Rights Watch (HRW) – an organisation which deserves considerable credit for attempting to apply its human rights standards to all protagonists in a particular situation – the case against both the woman and Ibrahim were marred by serious violations of international human rights law.

These violations include coercive interrogation of the woman while in custody; administering the “finger test” to determine whether or not she had been raped, and failing to allow the defence to present its case or introduce witnesses. The finger test is just as humiliating as it sounds. “An unscientific, inhuman, and degrading ‘test’ that has no forensic value,” says HRW.

On Sunday, the case went on appeal, and finally some sense – and a fair bit of diplomatic pressure, no doubt – prevailed. The woman’s sentence was overturned, the judge recognising that reporting a crime is not the same as “insulting the government”, even if members of said government are implicated in it. But journalist Ibrahim was not so lucky. Although his sentence was halved, the judge found him guilty of bad journalistic ethics and not respecting the laws of the country (it’s unclear exactly which laws these are).

To summarise: in the new-look, post-Al-Shabaab Somalia, you’ll get prosecuted for accusing government members of crime, you’ll get sexually assaulted in an attempt to prove your guilt, you’ll be denied the opportunity to defend yourself in court and journalists attempting to talk to you will be prosecuted. Yes, you might eventually get let out, but by then you’ve spent weeks or months at the mercy of the judicial system and no one’s bothered to investigate the original complaint. Sounds like the kind of thing that got A-Shabaab into so much trouble with the international community (except you can’t sew a hand back on).

This is a common complaint in post-conflict situations, especially when the basis for war against so-called “terrorist organisations” such as Al-Shabaab, the Taliban or al-Qaeda in the Islamic Maghreb is often their disregard for basic human rights, and particularly their attitude towards women. This is the moral and usually ex post facto justification rather than the realpolitik explanation, but it provides the foundation for military action: we are better than them.

But all too often, the interim or transitional governments appointed in their stead preside over atrocities which seem to be just as bad.

Mali is another case in point. Yes, the various militant groups involved in the northern rebellion – Al Qaeda in the Islamic Maghreb, Ansar al Din, the Movement for Unity and Jihad in West Africa (Mujwa) – did some unspeakable things while they had the upper hand. But it wasn’t long after the French intervention before the new authorities were repeating some of these atrocities. Two weeks ago, another Human Rights Watch report detailed how Malian soldiers were behind a number of executions, torture and forced disappearances – often on the basis of ethnicity alone – of men they suspected of involvement with the northern rebels.

Or in Afghanistan, where the United States – which has been propping up the government of Hamid Karzai since the fall of the Taliban – was recently asked to remove its special forces units from one strategic provinces after receiving hundreds of complaints from local residents. “It became clear that armed individuals named as US special forces stationed in Wardak province engage in harassing, annoying, torturing and even murdering innocent people,” said a statement from Karzai’s National Security Council. Is the new reality in Afghanistan really any better than the Taliban?

Many people would say yes, and their defence would be one that has been proffered by would-be liberators since time immemorial. It is the classic, time-honoured ends-justify-the-means approach, as argued in this response to the Afghanistan story in The Examiner. “Whatever abuses occur with the US military, they’re small potatoes compared to Taliban’s known brutality,” writes John M Curtis. “Instead of showing gratitude for costly US sacrifices since launching Operation Enduring Freedom October 7, 2001, Karzai continues to find fault with the US military… When Karzai considers the 2,177 US deaths and nearly $1 trillion outlay for US security and nation-building, complaining about US presence makes the Afghan government look like ingrates.”

The central premise of this argument is that even if US troops get up to a little naughty business from time to time (and who doesn’t these days?), it’s irrelevant when compared to the achievements that the US-led effort has ushered in: a new government, a democracy of sorts, an end to the Taliban’s rule. And even if some dodgy stuff happens on the watch of the new Afghan government , it’s not nearly as dodgy as what the Taliban were up to.

This takes us into some tricky moral territory, but is worth contemplating nonetheless. It is tasteless to compare atrocities, or tragedies, or human rights violations. In most cultures and religions, a human life is considered invaluable, and losing just one is one too many. But it’s equally true that it is better to lose one life than to lose 20. And, the reality is that trying to set up a new government is a tricky business, and things will go wrong.

Instructive in this regard is the reaction of the Somali Prime Minister Abdi Farah Shirdon, commenting on the upholding of the verdict against Ibrahim. “I was hoping for a different outcome on the journalist. I note his sentence has been reduced from 12 months to six, but I do not believe journalists should be sent to prison for doing their job. We must have freedom of expression, which is guaranteed in our constitution.” Prime minister he may be, but Shirdon doesn’t have the power to overturn the decision. And if he had acted unilaterally to release the journalist, he would have been rightly criticised for ignoring the rule of law.

This is all a longer way of saying that post-conflict governments are always messy, and that there are very difficult decisions to be made by everyone involved, some of which have grossly unjust outcomes. Truth is, it’s far too early to tell whether the new Somali government will be better than Al-Shabaab. The same applies in other post-conflict situations such as Afghanistan and Mali (admittedly “post-conflict” is a much too generous description, given that in none of these countries is the fighting over).

So, as tempting as it may be to the cynics out there (in whose company I often find myself), let’s not write off the Somali government because of one horrific human rights violation. Instead, let’s keep a close eye on what it’s doing, and support the work as much as possible of Somali journalists and watchdog organisations like Human Rights Watch, who play a vital role (when they’re not being locked up, of course) in keeping the government on its toes. DM

Photo: New Somali parliamentarians pray during an inauguration ceremony for members of Somalia’s first parliament in 20 years in Mogadishu August 20, 2012, in this photograph released by the African Union-United Nations Information Support Team. Out of a total of 275 parliamentarians, 211 were sworn-in today at an open-air ceremony at Aden Abdulle International Airport in the Somali capital of Mogadishu. The Ministers of Parliament were selected by traditional elders and are scheduled to sit in the first session of parliament on August 21, where the process of selecting a speaker of parliament and a new president will begin after the current mandate of the UN-backed Transitional Federal Government (TFG) expired on Monday. REUTERS/Stuart Price/AU-UN IST PHOTO/Handout