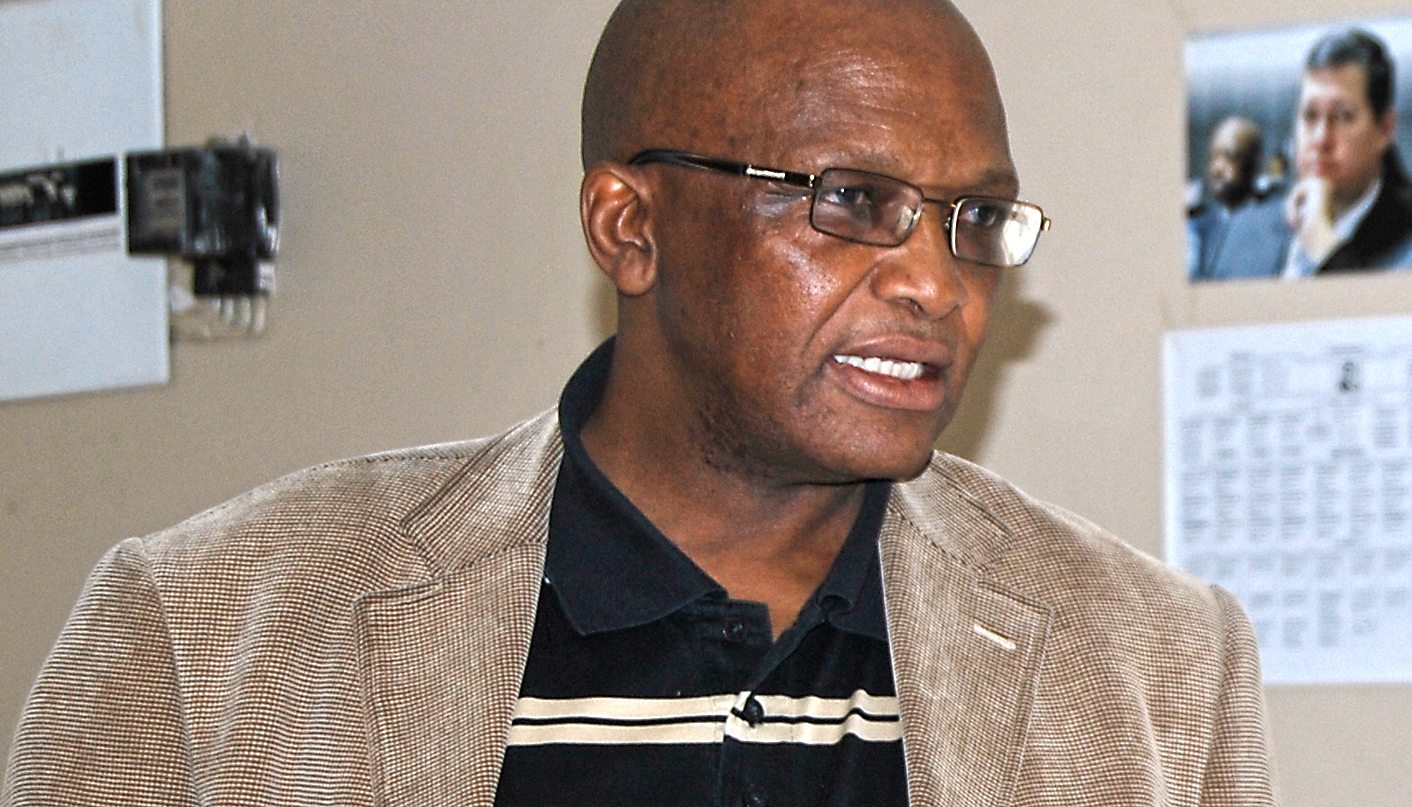 On the surface it may seem like an unlikely alliance, one unheard of a decade or two ago: MK vets and middle-class citizens. But they are now fighting a common enemy, namely racketeers and those in government departments who have been corrupted by respected businessmen bribing their way to the top. Now, concerned citizens in Gauteng have joined forces with MK veterans in a new struggle for survival. “This is not what we struggled for – for so many years in exile,” the veterans told DE WET POTGIETER. That, and much more.

On Monday, a team of top detectives from the Hawks’ commercial crime unit in the Free State travelled to Gauteng. Their mission? A briefing by a group of concerned citizens calling themselves the People Against Corruption and Fraud (PACAF), in association with the MK Liberation War Veterans Union (MKLWVU) (a group of Umkhonto we Sizwe veterans).

The groups had joined together officially to declare war on corruption, which they called “the scourge of our nation, strangling our country to death.”

They handed over a hefty dossier with criminal charges of racketeering, corruption, fraud, tax evasion and service delivery violations against 38 people in the Ekurhuleni metropolis. Giving the detectives an overview, Mike Naraine – a former MK cadre and expert advisor of the group – said they had insisted that investigators from the Free State were assigned to the investigation because PACAF and MKLWVU had no confidence in the Gauteng-based Hawks.

After handing over the documentation, Naraine told Daily Maverick that this dossier was merely the first indictment in a much wider investigation – one which spans the country, with a current focus on Gauteng and expanding into the Free State.

At the centre of the charges lies the controversial multi-million Rand Meyersdal Eco Estate, one of the most expensive areas in Alberton. If this sounds familiar, it probably is: the Ekurhuleni metro notoriously lost up to R90 million in 2005 by swapping the land where the estate is being developed for a protected area worth R7 million.

It was developed by Hometalk Developments and Afropulse 132s – two of Rean Booysen’s development companies – and the gross income Booysen expects to realise from the development is estimated at R180 million.

On the surface, it’s a glamorous world of luxury estates. Strip away the top layer, however, and there are murky allegations of councillors and officials abusing their positions in order to swap state land, using under-handed methods to approve the development of new residential townships.

The above is not the first troubling link to a Booysen development, either. Obbey Mabena, spokesperson for the MKLWVU, told the Hawks that parallels could be drawn between troubles seen in Parys in the Free State and problems faced in Ekurhuleni. In the latter, sewerage and storm water spillage from Meyersdal flows into the wetlands of the nature conservation area at the nearby Rietvlei Zoo Farm. In a similar vein, five years ago the district manager of health for the Fezile Dabi district in Parys, DA Matsebula, warned the Free State provincial government about the potential damage caused by sewerage spilling into the Vaal River from the prestigious Parys Golf and Country Estate.

Matsebula said the sewerage reticulation and sewerage disposal system installed by the developer – the very same Rean Booysen – was not in line with the required regulations.

“Any pollution risk to the river system and possible influence of water quality is of great concern,” Matsebula warned.

Since then, the levels of pollution into Vaal River have increased, despite numerous complaints and warnings from residents.

The Rietvlei Zoo Farm is south of Johannesburg, between the suburbs of Glenvista and Alberton. Its picnic areas are set in the most tranquil settings on the farm, surrounded by natural wetlands, large willow and oak trees and beautiful green gardens, where city people go to relax and enjoy the sunshine. Tina Booysen, the custodian of Rietvlei, holds the tender for the facilities from the City of Johannesburg. She told Daily Maverick they had been fighting a losing battle trying to save the wetlands from Meyersdal’s effluent water polluting the protected area.

In addition to environmental concerns, there are also substantial question marks around the possibility of fraudulent development deals. In addition to raising ethical questions around pollution, Naraine told the Hawks that a “hatchet team” of at least five Ekurhuleni municipal officials were part of an alleged crime syndicate that helps fraudulent development deals gets through the system. He also named a chartered accountant with close ties to SARS as being part of the group.

Corroboration of these allegations has come from Rynette Farrar, a housewife and mother of two, who is one of the key witnesses. Farrar, who also stays in Meyersdal, handed over several affidavits as part of the indictment.

Since she started voicing her concern about the alleged irregularities, she has been forced to consult lawyers and lay charges against the developers.

In her statement, Farrar explains her reasons for exposing the alleged wide-ranging fraud, corruption and racketeering relating to the development:

•          to report the theft of the land belonging to the homeowners’ association that was never transferred into the association’s name by the developer, Rean Booysen;

•          to report the granting of authorisation from Ekurhuleni Metropolitan Municipality and the Gauteng department of agriculture, conservation and environment (GDACE) to establish the development of  portions of Meyersdal on land that does not belong to the developer and without the mandate from the homeowners’ association members;

•          to report GDACE and the municipality’s refusal to act on her frequent requests to correct the false and fraudulent information that was given to them by the developer and/or his agents;

•          to report the frequent misrepresentation made to prospective buyers, Board of Directors and homeowners;

•          to report the fraudulent manner in which business was carried on (exercising voting rights) in the name of Sunset Bay, despite the fact that the company was liquidated (Sunset Bay was one of Booysen’s companies, used by him to sell property in Meyersdal and also to pass resolutions on his behalf  as a member of the board of the Meyersdal Homeowners’ Association);

•          to report the Board members who were and still are blatantly ignoring the Companies Act and their fiduciary duties.

In her affidavits, Farrar describes at length the ways in which the Ekurhuleni city council ignored her pleas for an investigation into the land deals.

Since 2010, she has written many emails and letters requesting Ekurhuleni to investigate the claims of fraud and corruption. Despite her pleas, council ignored this, instead declaring the areas in dispute an approved township in January last year. The rest followed two months later.

In October 2010, Farrar voiced her concern about the situation to the Ekurhuleni municipality and handed a petition over to an ANC councillor who promised her he would hand it over to the petitions board with the next council meeting.

“Somehow I did not trust him and I decided to hand deliver it to a council official. I have never heard from the petitions committee of the EMM,” she says.

Captain Paul Ramaloko, spokesperson for the Hawks, confirmed on Thursday that a dossier was handed over to senior officers of the commercial crime unit. He said they were looking into the matter.

Booysen’s attorney, Ian Small-Smith, said his client was in Fiji and could not comment.

The investigation has further-reaching social implications as well. Mabena and Naraine, both MK veterans who spent years in exile, said on behalf of the MKLWVU that many of the financial problems faced by municipalities could be attributed to exorbitant amounts spent on providing services to the multi-million rand development of upmarket estates for the rich and famous in South Africa.

“While these privileged elite enjoy the best of both worlds, the poor masses are left behind to live in squalor in shanty towns without any proper sanitation and electricity.

“The recent violence in Sasolburg can be directly linked to the critical state of service delivery in Parys, where providing preferential services to the privileged minority resulted in a Free State town without enough finances to secure essential services for the poor and disadvantaged people.

“They benefited from Apartheid and are yet again abusing state resources for their own developments, resulting in little money left for the upliftment of the poor in the townships,” added Mabena.

Mabena said they handed over documented evidence that the estate developments in Meyersdal and Parys ignored the required specifications for the installation of sewerage systems, and therefore left the municipalities to cope with the inferior services from the estates.

“A proper investigation by the Hawks will prove a direct link to those sewerage systems battling to cope with the demands from these estates and the spillages into the Vaal River and the Rietvlei Zoo Farm – internationally protected wetlands,” said Mabena.

Mabena is quick to distinguish the MKLWVU from the MK Veterans’ Association (MKVA), citing ethical reasons – and hinting at corruption in the MKVA, too. “We are not part of that group’s shenanigans at Luthuli House,” as he put it.

According to Mabena, war veterans have seen very little of the billions raised by the MKVA through investments in Cell C, Neotel and in mining and shipping operations. “You are very lucky to find one veteran who really benefited from this fund,” he said.

“A handful of people running the MKVA trust benefited very lucratively in this fund, and this is also one of the main reasons we say the law-abiding and concerned civil society of South Africa have to take hands in fighting this scourge of corruption looting our country.”