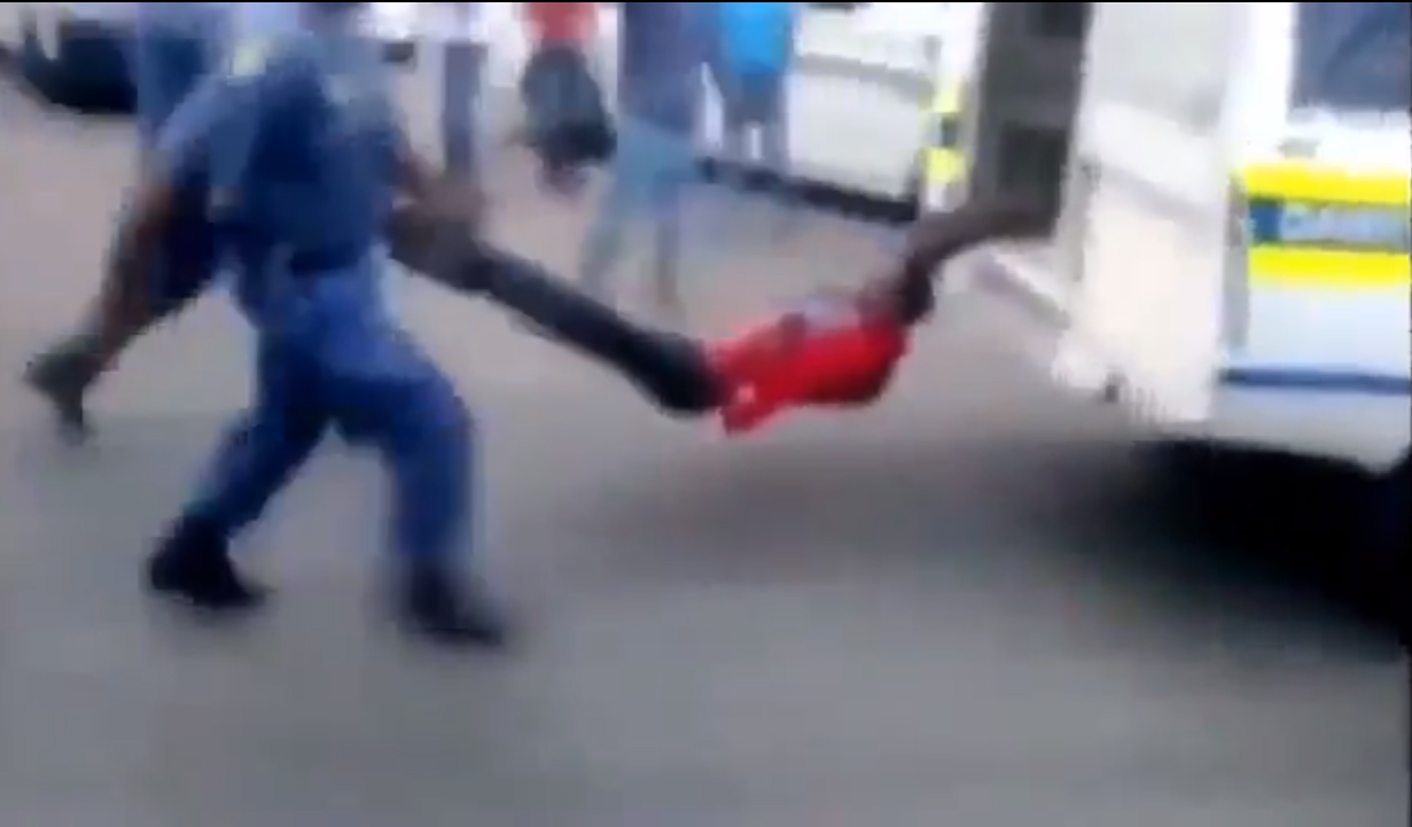 The disturbing story of Mido Macia, the 27-year-old Mozambican who died in custody after being dragged through the streets by police, should not come as a surprise. The incident was horrendous and publicly shared on video. But it’s indicative of a police force that rapes and murders instead of serves and protects. By GREG NICOLSON.

Log onto the Independent Police Investigative Directorate website and read the oversight body’s latest news. On Wednesday, a 38-year-old constable appeared in the Welkom District Court after he was charged with raping a 42-year-old woman. She had been arguing with her sister before the police were called. The police found her at home, proceeded to handcuff her. They took her to a field where the constable allegedly raped her next to the police van. The constable is out on R1,500 bail.

On 21 February, another constable faced court for another rape, this time in Boshoff, Free State. The constable gave his ex-girlfriend and other friends a lift from a tavern in a state vehicle. When the two were left alone, the car pulled over so that the victim could relieve herself. After a chase, the constable allegedly raped her without a condom, assaulted her and threatened to kill her when she refused to get back into the car.

On 18 February, the case against police constable Hlengiwe Mkhize was wrapped up in the Pietermaritzburg High Court. Mkhize was convicted of murder and attempted murder for shooting and killing 15-year-old Mlindeli Ngcobo. Ngcobo was riding in a car that was in an accident with the constable’s. Both parties agreed to report the incident at the police station, but Mkhize fired two shots into the car and killed the teenager, who was hit in the head. She claimed it was an attempted hijacking and that she had only intended to fire warning shots, but will be sentenced on 1 March.

“The IPID is satisfied with the conviction as it sends a message to rouge [sic] police officers that they will be held accountable by the criminal justice system of our country,” said the oversight body about Mkhize’s conviction.

Only a week later, however, there is this: “IPID is investigating the death of a taxi driver at the hands of the police”. According to police, Mozambican Mido Macia, 27, was allegedly obstructing traffic in Daveyton with his Toyota Avanza taxi when they turned on their siren and asked him to move. They say he then assaulted a constable and took his gun. A warrant officer intervened and got the firearm back before driving to the police station in Macia’s taxi for backup.

When he returned, the constable was struggling to put the suspect in the police van, say the cops. “The policemen then put the resisting suspect into the back of the police van and they took him to the police station where he was detained. The taxi driver was found dead at about 21:15 by another police officer. An Inquest docket was later registered. An assault GBH docket against the deceased was also opened by the police,” reads the SAPS account.

Ipid’s initial statement declined to mention the fact that Macia was tied to the police van’s bench and dragged through the street. The rear doors were open as he was towed behind the police van. Officers participated in broad daylight in front of dozens of people. When Macia tried to resist the pain of being dragged along the road by using his feet to lift his body off the ground, the officers involved lifted both his legs and then dropped them before the police car took off to the station.

The actions of the police were a brutal attempt publicly to inflict pain and humiliation. There’s no other interpretation. Dragging a person behind a car is an expression of power. The culprits use little effort while they publicly humiliate and inflict extreme pain on a person. Macia, while tied and moving at speed, was utterly helpless and must have been terrified while the cops simply watched on or drove in the vehicle.

The Daily Sun broke the story on Thursday (on Wednesday it led with a man who eats frogs, but on Thursday it was the toast of SA media). Witnesses at the scene told the paper that Macia had parked on the wrong side of the road and was assaulted when he argued with police. A source who saw Macia in the cells told the newspaper not to be fooled by comments from the police: “These cops must not try to speak nicely to you… They killed him. They beat him up so badly in here.” A witness on the street filmed the incident and gave the footage to Daily Sun. It has since been seen around the world after being posted online.

On Thursday, Ipid spokesperson Moses Dlamini told that eNews the inquest into the police culprits has been upgraded to a criminal murder charge. He said Macia died of head wounds “and you can see then if you look at the footage how that came about,” said Dlamini. The spokesperson called this incident extremely disturbing. National Police Commissioner Riah Phiyega used a statement to say she “strongly condemned” the act – all things considered, a rather soft approach to the visual evidence available.

This incident is not isolated, either. Alongside the Daily Sun’s article on Macia – “Tied up, dragged and beaten to death!” – was a report from the Marikana Commission of Inquiry. Mzoxolo Magidiwana, who was shot but lived, said of the police, “I heard them celebrate as I lay on the ground after being shot… I heard the police laugh, saying, ‘Even their leader, Mgcineni “Mambush” Noki is dead.’”

After Macia’s death, Amnesty International said that Ipid had received 720 new cases for investigation of suspicious deaths in custody between April 2012 and March 2012. “Amnesty International urges the South African government to make a public commitment to ensure that the police stop the use of excessive force and deliberate targeted killings,” said the organisation’s southern Africa director, Noel Kututwa.

Police union Popcru said it was “mortified by these actions which demonstrate the opposite of what the men and women in blue represent.” It added its support to Ipid’s investigation. Popcru, no doubt, would rightly be worried about the image of the South Africa’s police and remind us that there are law-abiding cops out there who are committed to their jobs.

The abuse, however, has developed to levels that cannot be tolerated. President Zuma released a statement on Thursday sending his “heartfelt condolences” to Macia’s family. “Members of the South African police service are required to operate within the confines of the law in executing their duties,” said Zuma. “The visuals of the incident are horrific, disturbing and unacceptable. No human being should be treated in that manner.” Zuma has asked Police Minister Nathi Mthethwa to investigate.

Police abuse – both on the streets and in the cells – calls for much more than an investigation by Mthethwa into a single incident. Cops are being charged with rape and murder, not to mention a list of other crimes, and Commissioner Riah Phiyega needs to show South Africans she can institute changes to make police accountable to the country’s laws, rather than empowered to enforce their own arbitrary forms of “justice” and punishment.

Unless Mthethwa, Zuma and Phiyega start to make drastic changes to the pattern of abuse in the SAPS, the country will lose hope in an improved system. With the brutal death of Macia and the scores who died at the hands of the police before him, there’s certainly little hope in the system we have. DM